Accessibility links
An Angry Young Man Leads Protests Against India's Affirmative Action : Goats and Soda At 22, Hardik Patel is challenging the system of reserving jobs and college slots for socially and economically challenged castes. He's drawing crowds of 500,000 — and tensions are rising. 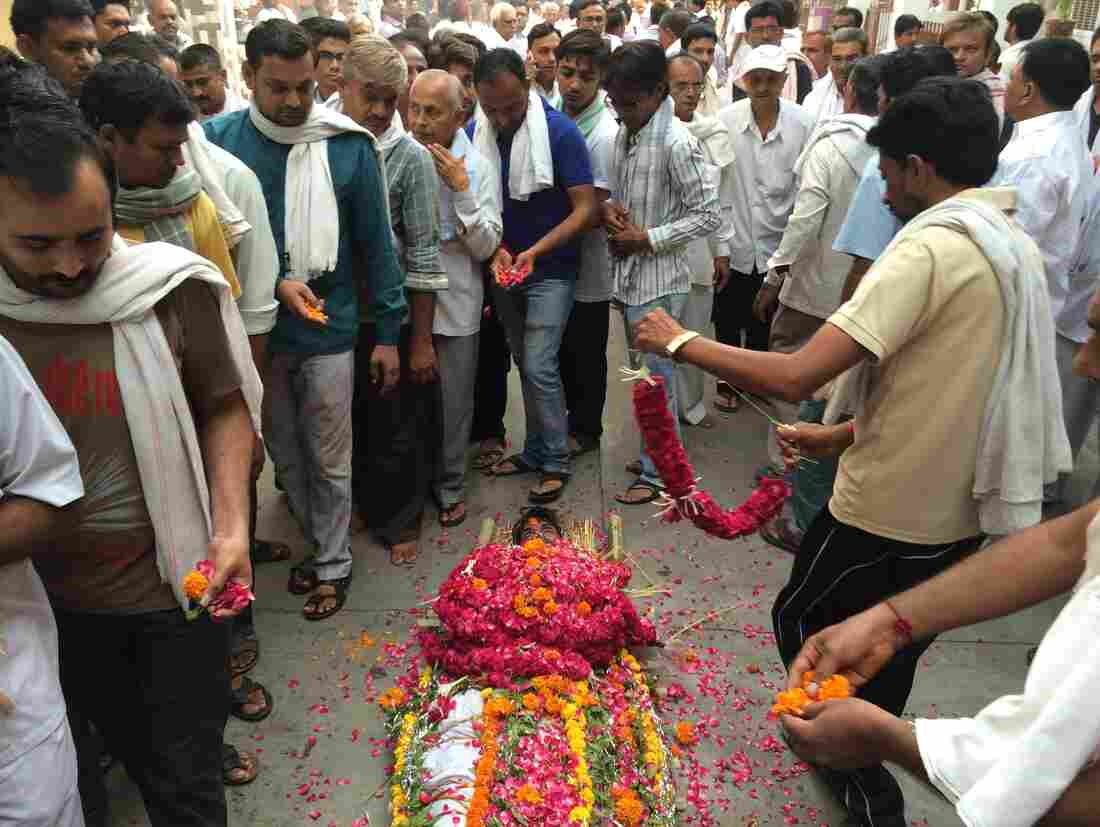 Mourners strew petals on the body of Shwetang Patel, 32, who is alleged to have died in police custody after riots broke out across the state of Gujarat. Julie McCarthy/NPR hide caption 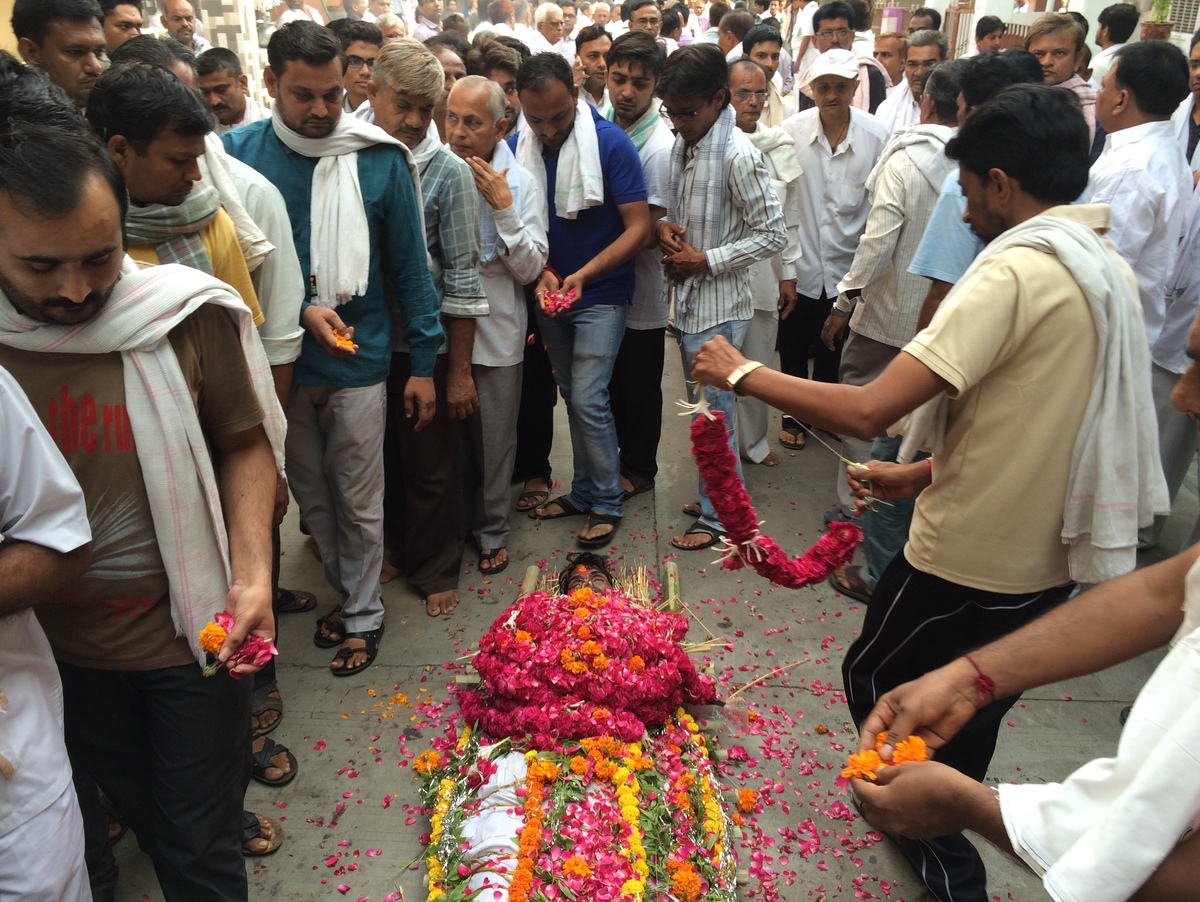 Mourners strew petals on the body of Shwetang Patel, 32, who is alleged to have died in police custody after riots broke out across the state of Gujarat.

India has been practicing a form of affirmative action since independence nearly seven decades ago.

The country has quotas that allow "reservations" for government jobs and college slots for members of the most disadvantaged castes.

But a backlash against such caste quotas in the state of Gujarat, Prime Minister Narendra Modi's home turf, provoked riots last week and fears that the upheaval may be just beginning.

Early Sunday morning, grieving men and women gently tossed rose petals onto the body of Shwetang Patel, 32, alleged to have died in police custody — one of eight victims of the violence that erupted across the state. Thousands of mourners joined the procession as Shwetang's corpse was borne through the streets of the capital Ahmedabad, the route bristling with 1,500 riot police.

The turbulence began after a stem-winder speech at a rally last Tuesday delivered by a brash, blue-jean clad Hardik Patel. At 22, he's not old enough to hold office — but he's cracked open the debate over India's affirmative action, pulling with him many of the state's 15 million Patels, a clan that belongs to the Partidar caste.

If the fault lines are race in America, they are caste in India.

Patel vowed to protect his caste against what he calls the unfair benefits to the "lower castes."

Half of Gujarat's population derives from castes formally known as "Other Backward Classes." Because they are socially and educationally deprived, they are entitled to 27 percent of government jobs and college seats.

Patel said in last week's rally that it's only right to give his caste the same opportunity and warned that if Modi's BJP Party did not, they would be voted out of power in the state. 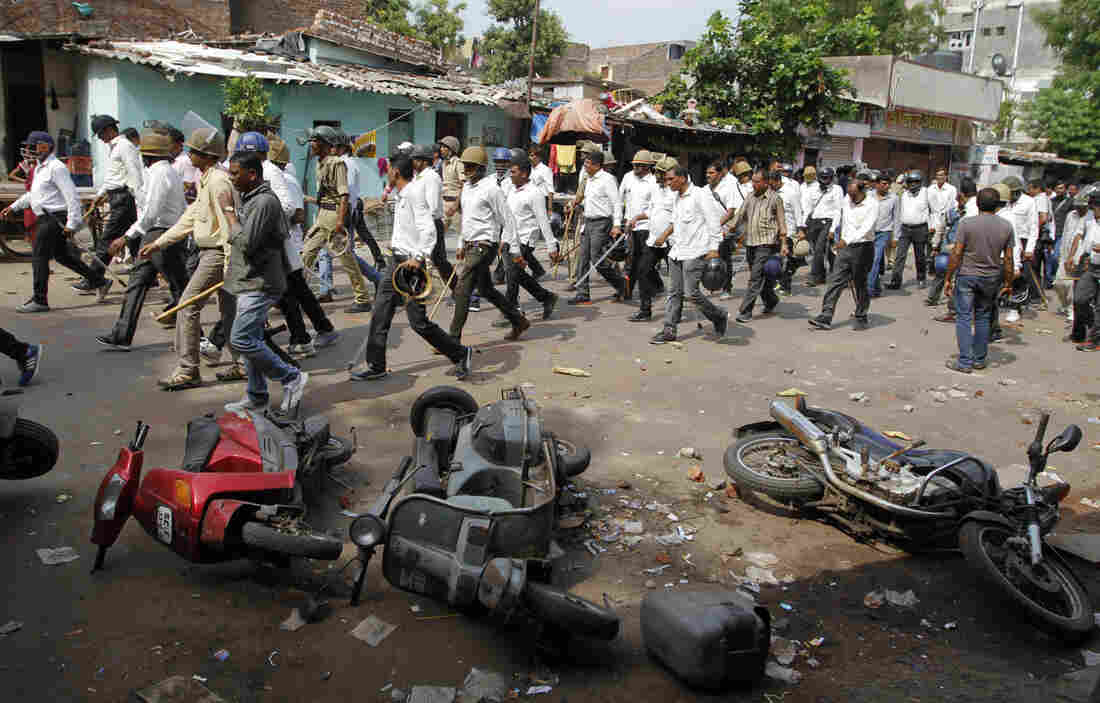 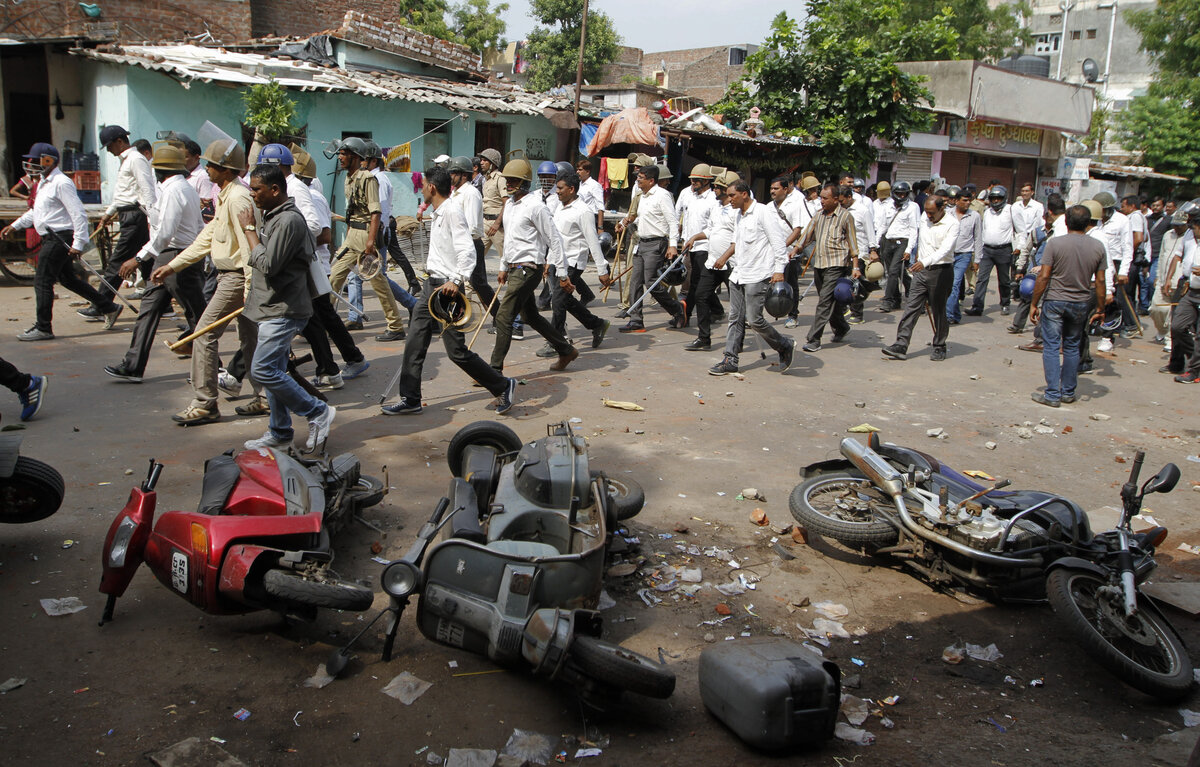 Indian police in plain clothes walk past vehicles damaged during a clash after the Aug. 25 rally led by Hardik Patel.

In an interview with NPR over the weekend, Patel said that heavy-handed police tactics were responsible for the unrest. When asked about his own supporters — who are accused of threatening elected officials with bodily harm — Patel did not disown them.

"I think they're right," Hardik Patel says. "What options do you have if you cannot stop police abuse?" He adds, "If you are fighting for your community then everything is justified."

Patel asserts that 30 percent of his caste is forced to sell off land to fund their children's education while less qualified candidates secure a seat in a good college and government employment.

"We've been pushed back by 30 years because of this quota policy," Patel says. "Only if we set it right will we become a global superpower."

In a matter of a few weeks, Patel has attracted crowds of half a million — something no politician except Narendra Modi manages to do in India today. Despite his youth, Patel has been compared to the 64-year-old Modi. But the young upstart organizer says he draws his inspiration from Sadar Vallabhbhai Patel, the leader from Gujarat who worked alongside Mahatma Gandhi and Jawaharlal Nehru to lead India to independence. In fact, Patel says his movement exposes the flaws of Modi's economic model and quips, "Modi is not God."

Sudarshan Iyengar, economist and former vice chancellor of Gujarat Vidyapith University, says the Patels are, by-and-large, not underprivileged. He says they were beneficiaries of land reform whose industry helped them prosper. He estimates perhaps 10 to 20 percent of the Patels are disadvantaged. And he says their demand for caste quotas may be a political gambit to say, "If we can't have them, no one can."

Iyengar says if the current outcry is because the Patels feel they are losing ground — that they lack social mobility and white collar opportunity, that they don't have access to the jobs and schools they think they deserve. 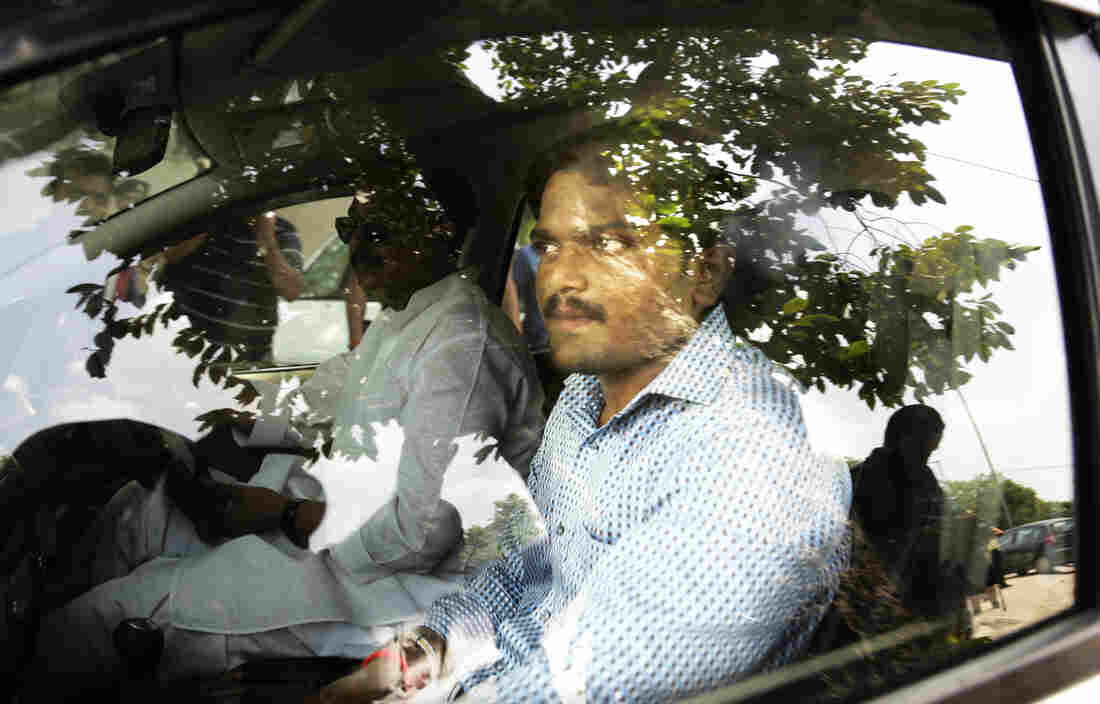 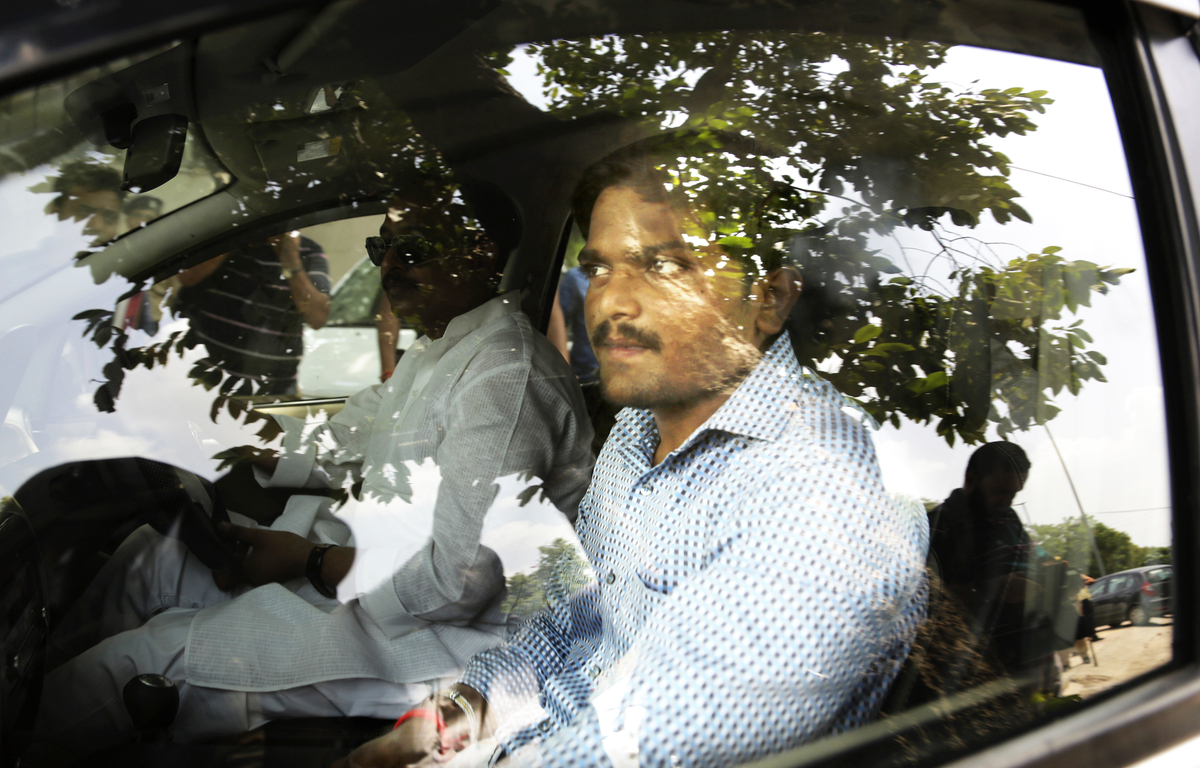 Hardik Patel is the 22-year-old firebrand leader who's opened the debate over India's version of affirmative action.

"They feel that their dominant political space is shrinking or is going to shrink, that's the perception. Therefore they want to come out very brazen, loud, aggressive," he says.

Iyengar also says the Patel movement poses a threat to the castes that receive quotas, such as that of activist Alpesh Thakor.

Thakor, 39, says even with quotas, the children of his Thakor caste are relegated to what he calls "pathetic" schools. He's organizing a demonstration to counter the Patels.

"They want us to remain in slavery," Thakor says. "They don't want us to progress or move up socially. They segregate us to low-paying jobs in factories ... and don't want us living in their communities."

Thakor says the agitation reveals how little development there was under Modi, who ran the state before heading to Delhi. "In Gujarat, there is no development of the people. The development is of the roads and is for industrialists. Even today, most of the OBCs [Other Backward Classes] live in villages and have reaped no benefits of any kind."

As tempers rise, so does the rhetoric. Local media quotes Hardik Patel urging supporters in New Delhi on Sunday "to speak with swords." Provocative words — the kind that economist and academic Iyengar says could invite reprisals from castes determined to defend their quotas.