Accessibility links
Fasting To The Death: Is It A Religious Rite Or Suicide? : Goats and Soda A member of the ancient religion of Jainism who is very sick or very old may opt to stop eating. But India's Supreme Court is weighing a ban on the practice because suicide is illegal by Indian law. 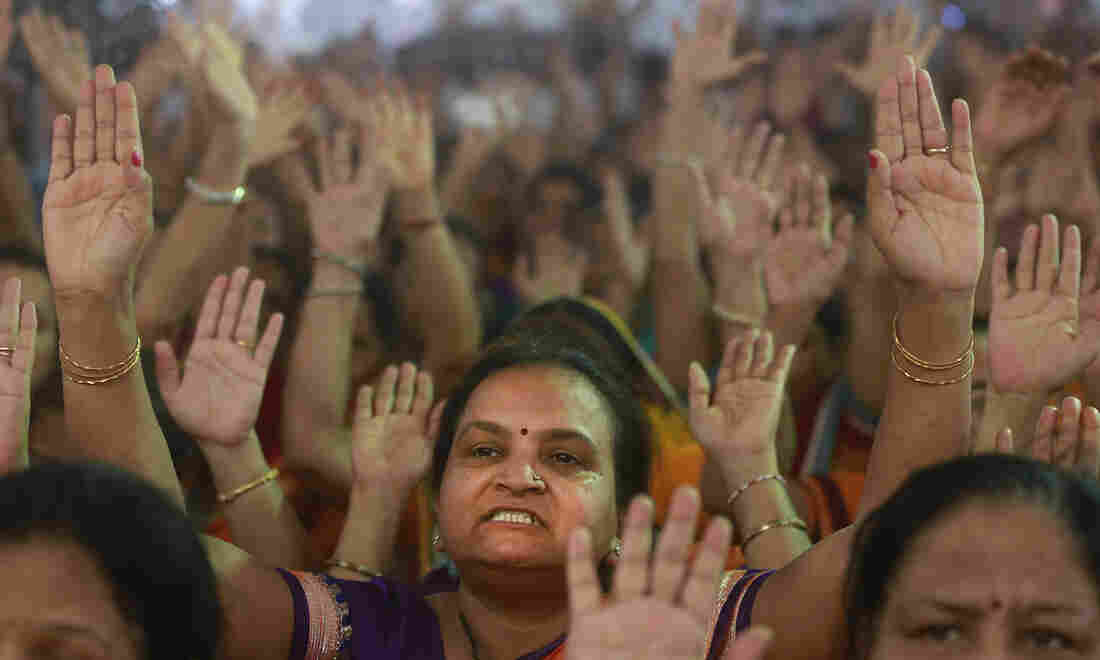 Members of the Jain community in Mumbai, India, protest a High Court order that banned santhara, a practice of fasting until death. Rafiq Maqbool/AP hide caption 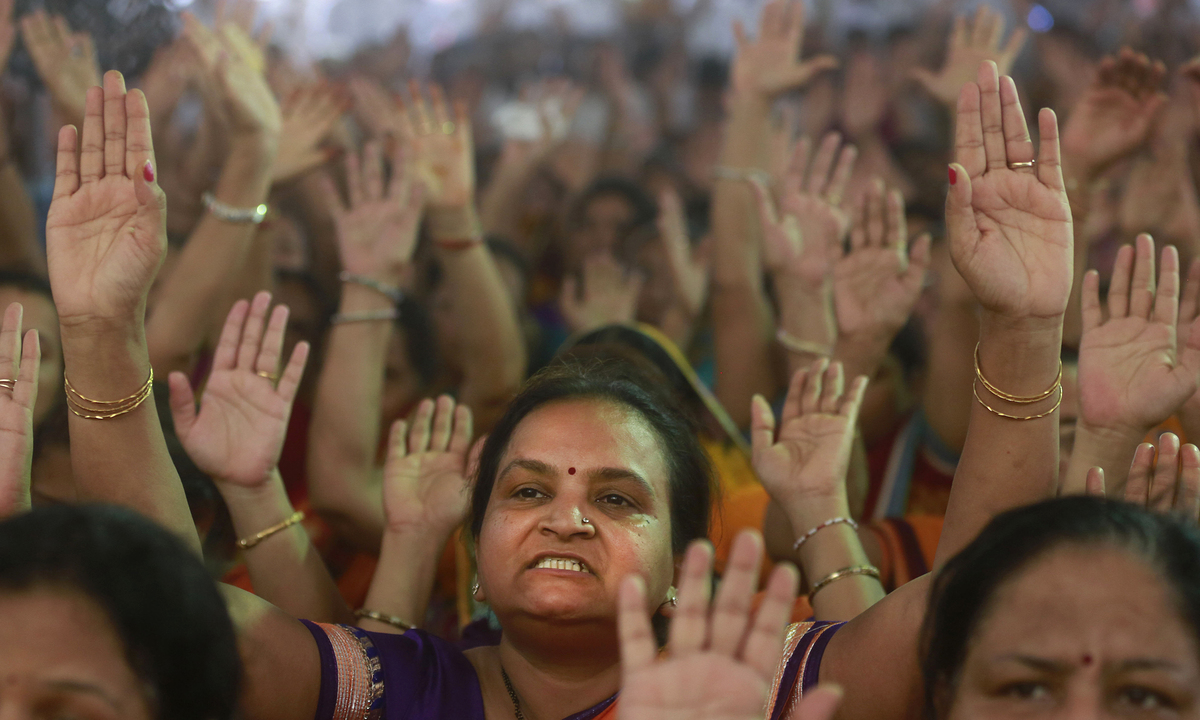 Members of the Jain community in Mumbai, India, protest a High Court order that banned santhara, a practice of fasting until death.

A person who is very old or very ill decides to stop eating in order to die.

To members of the ancient and tiny faith of Jainism in India, that's a tradition called santhara or sallekhana (literally thinning out).

India's Supreme Court is considering whether to ban the practice as a form of suicide, which is punishable under law. The court is now reviewing the end-of-life ritual.

Some form of fasting is deeply rooted in many religions: Christians practice Lent. Muslims have Ramadan. The Jewish tradition is to fast on Yom Kippur, the Day of Atonement. The Hindu calendar is rich with days of forsaking food.

But right now the attention is on the custom of the Jains, whose faith is on display at their 450-year-old Temple in Delhi's Old City Friday nights. As chants rise and drums thump, Jains gather for an aarti, or fire ceremony, offered to the deities. Jains recognized 24 gods. Wicks soaked in ghee or clarified butter are lit, and the small sanctuary with its kaleidoscope of flowers finely painted on the ceiling is awash in the golden light of hundreds of small fires. 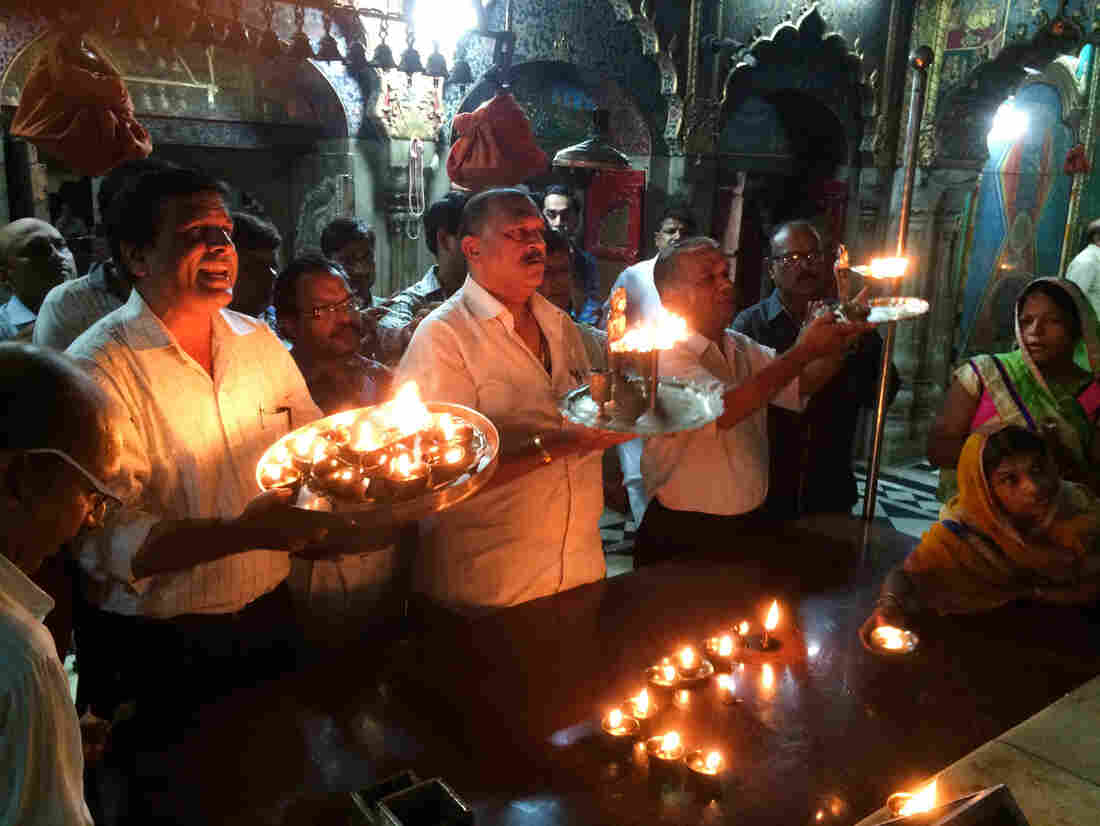 On Friday nights in their Delhi sanctuary, Jains light candles to pay tribute to their 24 gods. Julie McCarthy/NPR hide caption 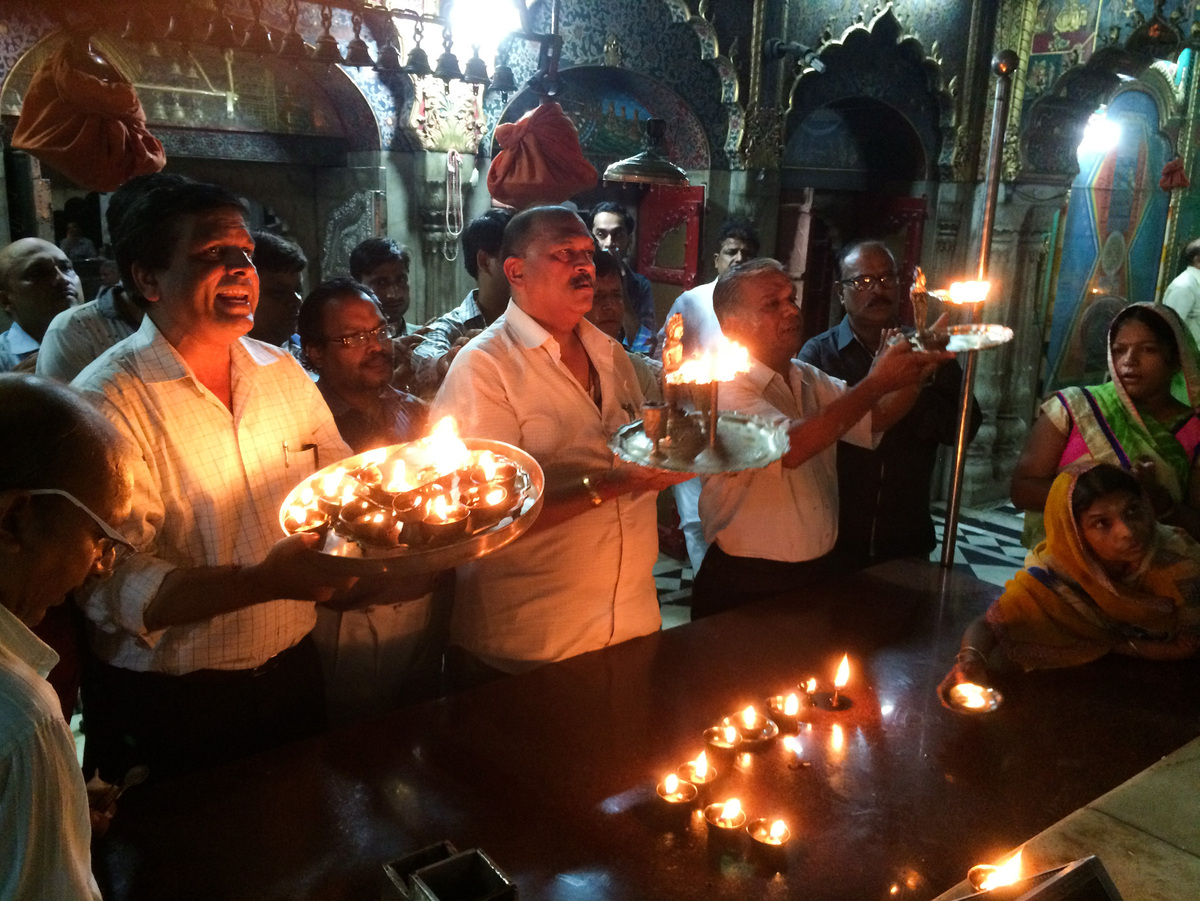 On Friday nights in their Delhi sanctuary, Jains light candles to pay tribute to their 24 gods.

Before stepping inside the inner sanctum, visitors are asked to leave behind anything made of leather. The central tenet of Jainism is nonviolence, and the slaughter of animals is forbidden.

The female "sadhu" or "saint" who resides in this temple tells me that she had plucked out all of her hair to avoid any infestation of lice that would need to be destroyed.

Jains are a distinct minority in India. They number 4.5 million out of 1.2 billion Indians, about half a percent. The most devout Jains may perform santhara or sallekhana — fasting until death.

Instead of it being a mournful end, Jain philosophy views death as a welcome gateway to the next birth. Like many of India's great religions, followers of Jainism believe in reincarnation and karma.

A.K. Jain, 58, runs a foundation to promote understanding of the religion. He says "not eating" is a nonviolent way to detach from this life and prepare for the next while purifying the soul.

"We are thinking of the next journey. You see in all religions the art of living is taught — how to live a good life. But in no religion it is taught how to die. So santhara is basically the art of dying," he says.

The art of dying is to take death in stride says Brahmachari Dharamchand Shastri, a Jain holy man. He has assisted some 60 other holy men in carrying out santhara. Through an interpreter he describes the act as the ultimate test of spirituality and self-discipline.

"You need to be a brave heart," he says. "And you need to have a very, very strong conviction and determination. Only then can you perform sallekhana or santhara."

Santhara is rare, performed only when death is imminent. It's estimated that some 200 Jains fast to death each year, many of them monks. But the fast can be ended at any point if the person has a change of heart.

But the practice has become a constitutional quandary. Last month the High Court of Rajasthan banned the fasting as attempted suicide, only to have the Supreme Court this week freeze that ban until a full hearing can be scheduled. That could take years because of the court's backlog. Until then, retired Supreme Court Justice Markandey Katju says the Jains are free to continue the ritual even though he believes that it is illegal.

"You're aiming at death. Ultimately suicide means putting an end to your life. How can you say it is not suicide?" Katju says.

Shekhar Hattangadi has made a documentary on the practice of santhara. He says in contrast to Christianity, Judaism and Islam, in Jainism there is not the sense that God has a claim on life. Jains accommodate a willing renunciation of the body and the best way to leave it.

And therein Hattangadi says lies a basic incompatibility: Eastern religions are being judged by the standards of Western law inherited from Britain, including the statute that makes suicide a crime.

"And that contradiction is between a statute founded largely on a Christian inspired bioethic and the essentially Eastern variant of the idea of spiritual advancement thru abstinence and denunciation," Hattangadi points out.

The fasting ritual is exposing cracks within the community. Younger Jains, like 40-year-old accountant Pratik Jain, question its place in the modern world. Pratik Jain says the end-of-life ritual isn't helping what is already one of India's slowest-growing religions.

"It's another extreme, which has not allowed this religion to flourish in a manner that it could have and therefore it's time that we look at it and try and put a stop to this," Jain says.

Nothing in the Supreme Court's order temporarily lifting the ban on fasting to death indicates how the bench will ultimately rule.

For his part, Retired Justice Katju says that "no freedom is absolute" — including the right to freely practice one's religion. And that "no religious custom can violate" statutory law, by which he means the penal code criminalizing suicide.

In a 2011 case involving the termination of a patient's life support, Katju cited court precedent that the constitutional "right to life does not include the right to die." Writing for the court, Katju did permit the right to die in the instance of withdrawing life support but only in very limited and stringent circumstances.

Retired Supreme Court Justice Gyan Sudha Misra was the other half of that two-judge bench. She told NPR that, "We attach absolute sanctity to the importance of life, even the remotest sign of life — because after all, no human is god."

But Dharamchand Shastri says fasting until death is "the last great act of life" that Jains have been choosing for centuries.

With a clap of his hands the Holy Man declares that ban or no ban, "One hundred percent I will perform santhara," and adds, "I will not be committing suicide."