Accessibility links
These Girls Complain If They Can't Go To School : Goats and Soda In some countries, parents don't send daughters to school. The obstacle can be tuition fees of, say, $300 a year. But a coal miner's daughter has found a way to bring 1.4 million girls to class.

These Girls Complain If They Can't Go To School

These Girls Complain If They Can't Go To School 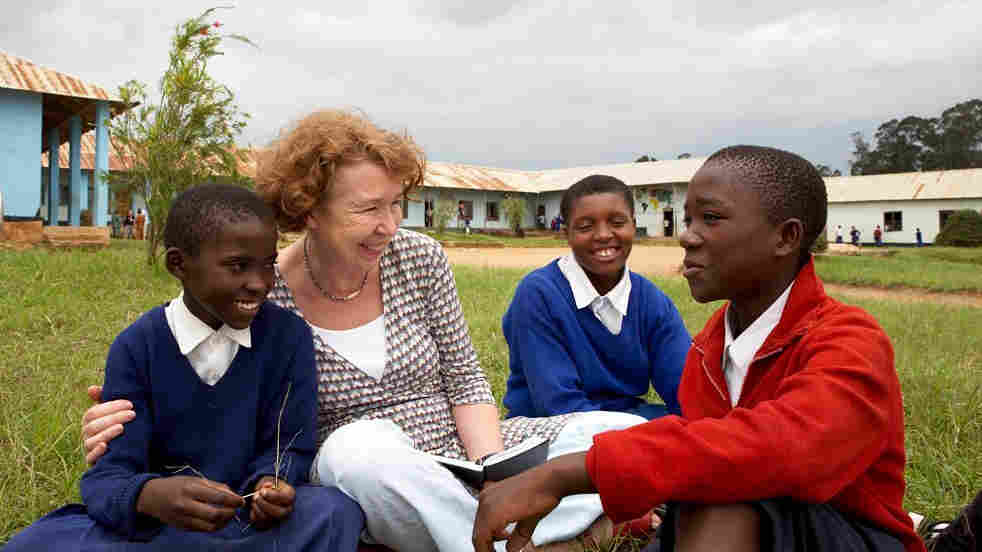 Ann Cotton, pictured with students in Tanzania, makes sure girls have the funds for everything from books to shoes, so they won't "feel like a poor relation" in school. Courtesy of Camfed hide caption 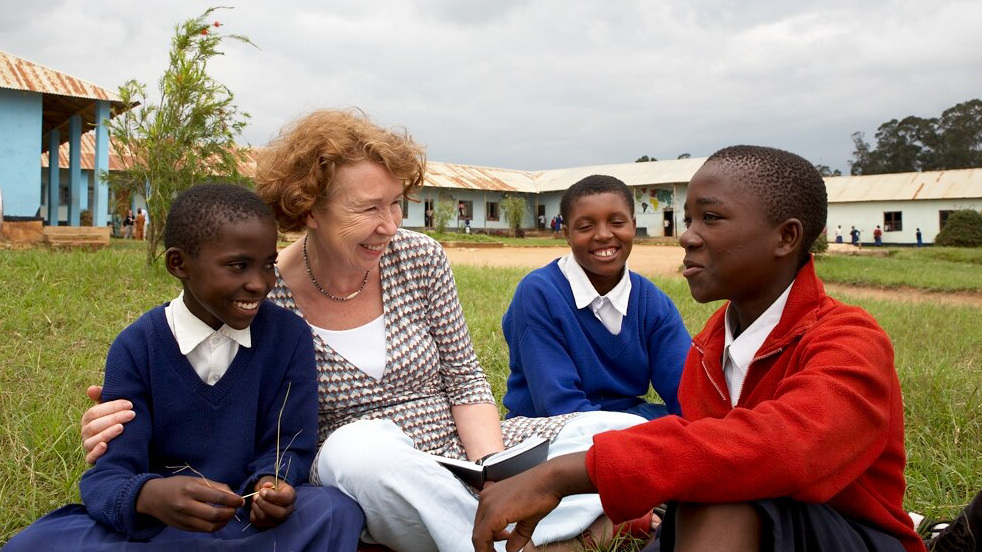 Ann Cotton, pictured with students in Tanzania, makes sure girls have the funds for everything from books to shoes, so they won't "feel like a poor relation" in school.

Yes, school is back in session. And students are no doubt grumbling about the end of the carefree summer.

But in some parts of the world, there are kids who don't get a chance to complain about what a drag it is to go back to school. Because they really want to go to school ... only they're not able.

A lot of them are girls. The theory has been that sometimes parents simply don't value an education for their daughters. Maybe the parents figure the girls will go on to marry and leave the family fold, so they are unlikely to give any money back to Mom and Dad. Or maybe the parents just want their daughters home to do chores.

How do you fight the attitude? In Zimbabwe a couple of decades ago, well-meaning aid groups were putting up posters and running TV ads encouraging parents (many of whom did not even own TVs) to send their daughters to school, as if all they needed was a little friendly persuasion.

And then Ann Cotton came on the scene. She's a Welsh coal miner's daughter who went to Zimbabwe in 1990 to do research on the 7-to-1 ratio of boys to girls in rural school districts.

When she actually asked parents about the girls who weren't in school, she heard a very different explanation. "With one voice, the community said, 'Girls are not at school because of our poverty. If we had the means, we would send our girls to school.' " The parents she talked to felt terrible about that decision. "If you can't send your daughter to school when you know it will help her," Cotton says, "you feel a sense of failure, and you feel that failure deeply."

In Zimbabwe, secondary school costs money. That's the case in a number of countries in the developing world. A typical breakdown of expenses in that part of Africa, Cotton says, might be about $107 for school fees plus $65 for uniforms and "good shoes," $10 for stationery ("children are expected to buy their stationery") and $40 for books. Girls also need sanitary protection — that's about $23, Cotton estimates. There are exam fees of about $8 for students in certain grades. Some students might need glasses or a hearing aid. The total cost for a school year could be about $300. And if it's boarding school, then there's $15 for a mattress and $20 for blankets and toiletries.

So parents make a decision. They decide it's worth sacrificing to send a son to school because he seems to have better job prospects than an educated girl would have — he could travel safely to a city for work, for example.

When Cotton told the aid groups what she had learned, they didn't want to listen. "I was told almost uniformly that I was misguided, that the community told me what I wanted to hear," she says. Aid groups didn't want to admit that they could be mistaken.

It was up to her to act on her newfound knowledge. And she did. Cotton's idea: Give families the money! In 1993, she founded Camfed — the name is a mashup of "campaign for female education." The nonprofit group gives out scholarships in Zimbabwe, Zambia, Ghana, Tanzania and Malawi.

Since then, Camfed has made it possible for more than 1.4 million children to attend primary and secondary school. They're mainly girls, but Camfed also aids boys at risk of dropping out. And it's set up a network of mentors to keep an eye on students to make sure their needs are being met.

"I do like their model," says Vivian Onano, a Kenyan who is a member of the U.N. Women Global Civil Society Advisory Group and who works for the think tank Africa 2.0. But she believes that culture does play a role in the decision families make not to pay for a girl's education: "When you educate a girl, from the community point of view she's going to go out and marry into another community, so that's a loss to the family." That's why the mentorship part of Camfed is critical, Onano says: "Helping these girls to be leaders in their community is a return on the investment [in their education]."

For her efforts, Cotton, who's now 65, received the WISE Prize of $500,000 last year (the acronym stands for World Innovation Summit for Education). Cotton was cited for two decades of work "to improve opportunities for girls and young women at the margins of education."

I couldn't resist asking her: Do these girls ever complain about having to go to school?