Accessibility links
The People Of Nauru Want To Get Healthy — So Why Can't They Succeed? : Goats and Soda The Pacific island nation is a symbol of just how hard it is to deal with obesity and diabetes. They're part of a new report on how countries of every income level struggle with these health issue.

The People Of Nauru Want To Get Healthy — So Why Can't They Succeed?

The People Of Nauru Want To Get Healthy — So Why Can't They Succeed? 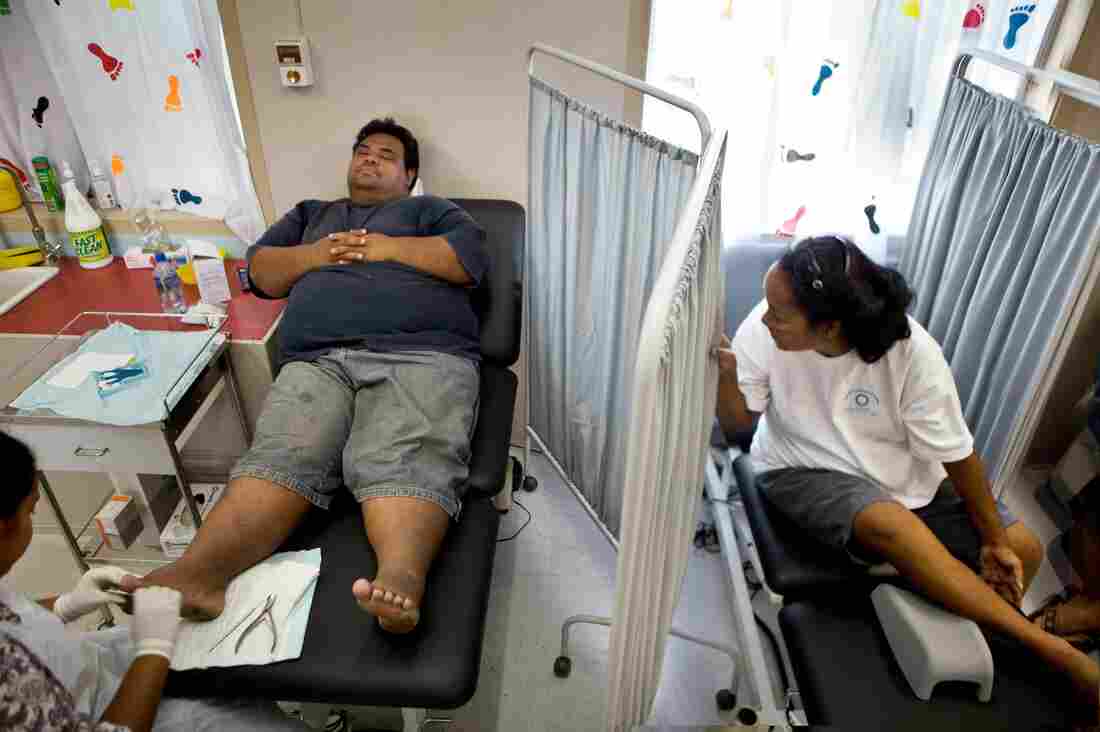 Diabetic patients get their feet treated at the Nauru Center of Public Health. The Pacific island nation has a high rate of type 2 diabetes. Matthieu Paley/Corbis hide caption 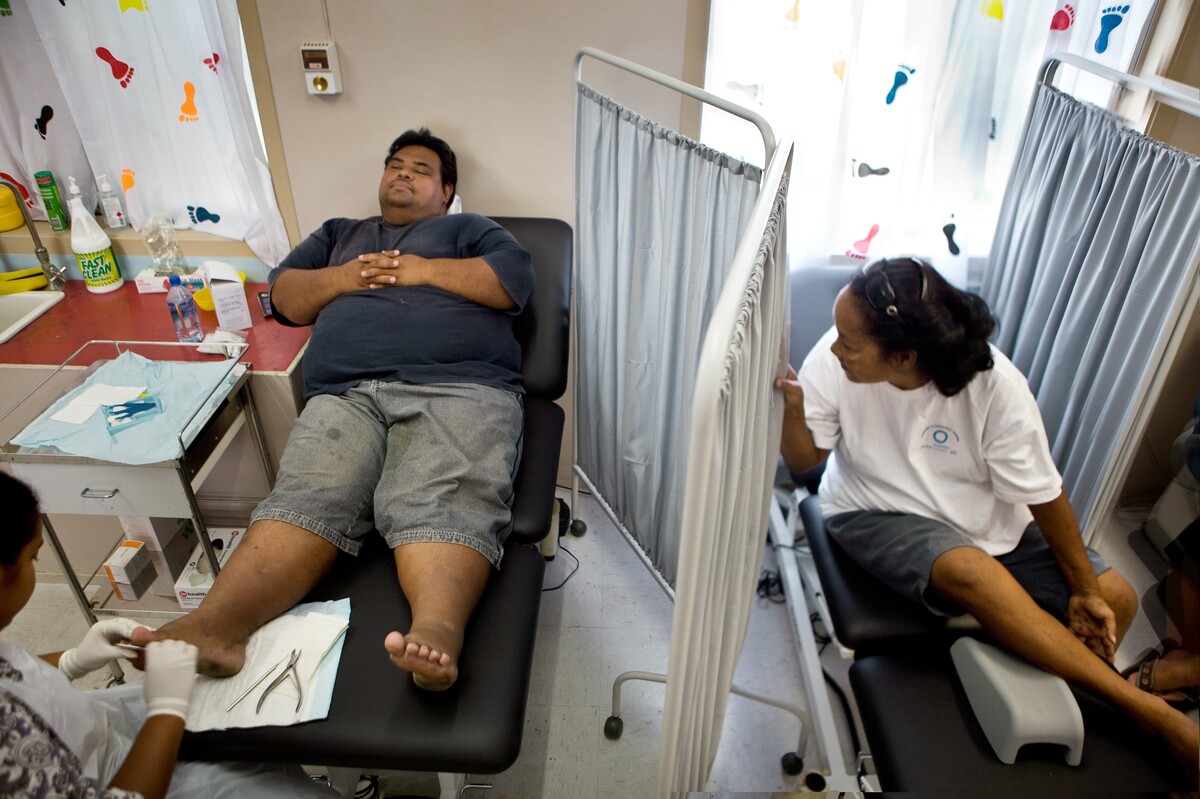 Diabetic patients get their feet treated at the Nauru Center of Public Health. The Pacific island nation has a high rate of type 2 diabetes.

The tiny nation of Nauru is only 8.1-square miles, and home to a population of 10,000. But in the world of public health, this Pacific island looms incredibly large.

It was in Nauru, in the mid-1970s, that researchers first identified a vexing problem that has since spread just about everywhere: sky-high rates of Type 2 diabetes — over 30 percent of the adult population.

In the forty years since that discovery, Nauru has earned notoriety for a variety of other reasons. In the early 1980s, it was the richest country per capita thanks to its phosphate mines, which had transformed the once-verdant paradise into a mostly barren moonscape. In the 1990s — when the mining business floundered — the government lost millions of dollars on a West End flop about Da Vinci (called Leonardo the Musical: A Portrait of Love). And in the 2000s, Nauru reinvented itself as a controversial immigrant detention center for Australia, about 3,000 miles away.

So it's about time for Nauru to pop up in the news again. And lo and behold, the country makes an noteworthy appearance in the just-released Global Nutrition Report. The survey — which shows that malnutrition strikes one in three people in the world — notes that obesity rates keep creeping up across the map. Only a single country (out of 193!) managed to eke out any sort of decline in adult obesity in recent years. That country is Nauru, which saw the rate for men drop by 0.2 percent between 2010 and 2014.

But the world shouldn't turn to Nauru to fix its obesity crisis just yet. That change is statistically insignificant, and even with that decrease in adult male obesity, Nauru is still at 39.7 percent, four times higher than the global rate.

The island is indeed a picture of health — very, very poor health. Binge drinking and tobacco use are rampant. Limb amputations due to diabetes are common. Residents must beat the life expectancy odds to survive until their 60th birthday. The main staples of the Nauruan diet are white rice, instant noodles, soda and anything in a tin. When anthropologist Amy McLennan, of the University of Oxford, spent 11 months living on Nauru, she says, "I was lucky to find one vegetable a week."

Looking at these facts, it's easy to assume that the population must be uneducated about health and unmotivated to change the situation. But the opposite is true, says McLennan, who believes Nauruans understand the dangers of diabetes and obesity better than almost anyone anywhere: "It's around them every day. Young parents are dying of heart attacks." And unlike other places where obesity is a relatively new concern, Nauru has been on notice for decades.

The island has experimented with what McLennan calls "a range of colorful things," including plenty of school programs teaching about proper nutrition and events promoting physical activity. But these often simply reinforce facts that Nauruans already know, but can't act on given their economic and social circumstances.

One of the most highly publicized efforts on the island was to encourage folks to walk the three miles around the airport perimeter once a day. According to the World Health Organization, that's been cancelled due to increased security.

"There's a lot of desire to achieve better health," McLennan says. "But at the moment, there's a lack of tools and resources and the environment to do that."

Researchers in the region speculate that any difference in obesity is due to the island's economic downturn, which has made accessing food, especially healthy food, more challenging.

"The lesson is that malnutrition and obesity sit side by side — two sides of the same coin," McLennan says. So in the developing world, a reduction in obesity might mean that the population is even worse off than before. She wouldn't expect to see any positive trends until the food supply changes dramatically.

That's true not just of Nauru, she adds, but of many economically disadvantaged places around the world.

Global Nutrition Report co-author Corinna Hawkes, a food policy specialist, hopes to help more people understand that link. As she explains it, "obesity is an indicator of poor nutrition." And it's often accompanied by additional indicators of poor nutrition, such as children who are underweight.

The problems are so gargantuan, Hawkes adds, that she isn't surprised there isn't an obesity success story just yet.

"We can't say countries have done enough," she says, although she notes that several strategies that are being implemented seem promising. The report highlights efforts worldwide to make nutrient lists on packaging easier to understand, clarify food labels (In Ecuador, levels of fat, sugar and salt are marked by a traffic light label, from red for high to green for low), limit marketing of junk food to children in TV ads and improve the nutritional quality of foods.

Most of these fixes are focused in wealthier places with the resources to pull them off. The report singles out Australia's Healthy Together Victoria program, which relies on a "multilevel, whole-of-system approach" that includes restocking vending machines with healthier options in schools, offices and hospitals.

McLennan is impressed by the policy changes coming out of Mexico. Over the past few decades, the country has developed an unparalleled thirst for sugar-sweetened beverages — it's the largest consumer of such drinks in the world. The habit has been blamed for Mexico's high rates of diabetes and cardiovascular disease. So, the government targeted its soft drink problem by rolling out a tax on Jan. 1, 2014 that has already affected buying behavior.

If more of these kinds of changes worm their way into our broken food supply system, expect to see real results, says Hawkes, who predicts adult obesity numbers could start to reverse — for the right reasons — in the next five years.

And hopefully the next time Nauru makes an appearance on the world stage, it'll be a healthier one.