Accessibility links
Parents In Poor Countries Worry About Vaccines, Too : Goats and Soda But not for the same reasons as Western parents. In the developing world, moms and dads want to make sure their kids are immunized quickly enough. A nurse in Hyderabad, India, gives a vaccine to a child. The immunization will protect against diphtheria, pertussis, tetanus and other diseases. Noah Seelam/AFP/Getty Images hide caption 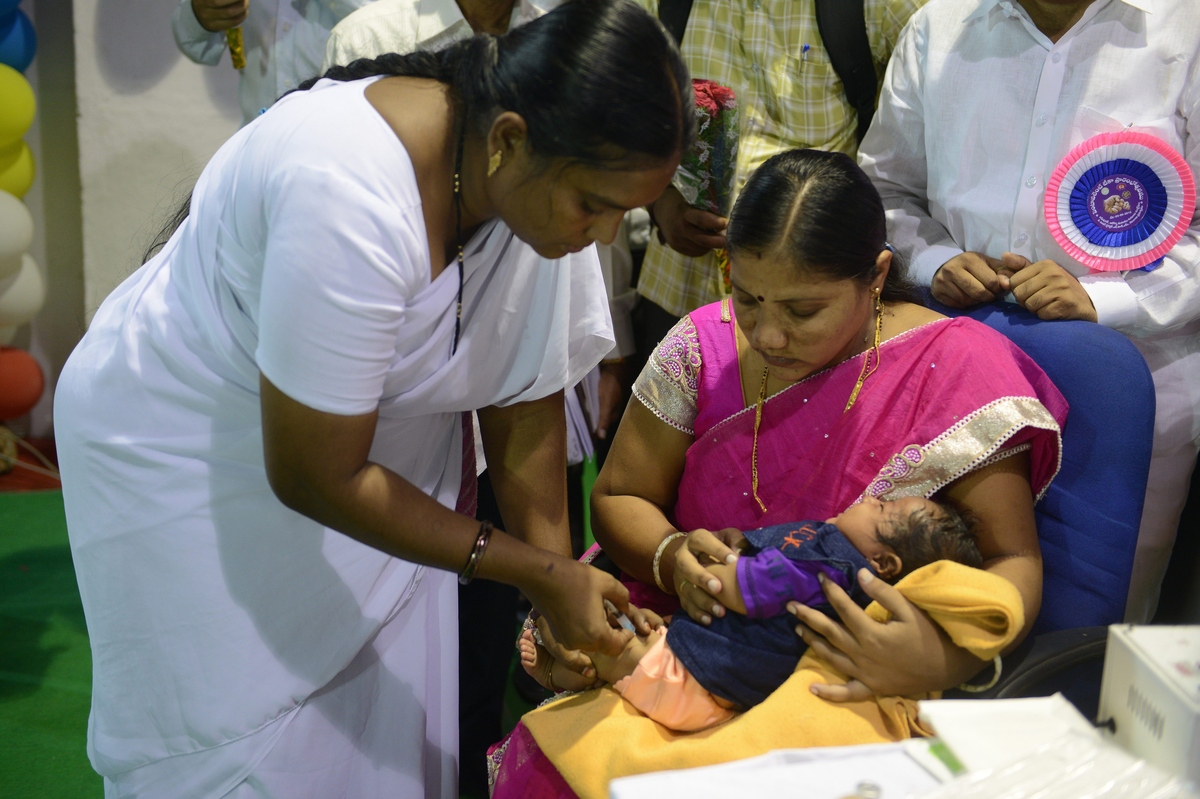 A nurse in Hyderabad, India, gives a vaccine to a child. The immunization will protect against diphtheria, pertussis, tetanus and other diseases.

Some Western parents worry whether vaccines for their kids are spaced too closely together. The last Republican presidential debate fueled anxiety over the issue.

Once again, health experts have been rushing in to reassure parents that the schedule for vaccinating children is not only safe but medically necessary.

But in the world's poorest countries, parents face a rather different set of worries around scheduling. Chief among them: Can they get their kids vaccinated quickly enough?

"Here [in the U.S.] we've forgotten what these diseases do," says Dr. Seth Berkley, CEO of the Global Vaccine Alliance, or GAVI. In poor countries, diseases such as measles kill tens of thousands of children each year. So while GAVI — which has vaccinated more than half a billion additional children since its founding in 2000 — has had to overcome a lot of obstacles, the organization hasn't typically had to deal with the kind of skepticism raised by Western parents.

"Parents [in poor countries] see these diseases around them all the time," Berkley says. "They see the consequences if you're not protected."

Still, there are some scheduling dilemmas in the developing world. For example, how soon after birth should a child be vaccinated? The answer is tricky, Berkley explains, because a newborn initially inherits the mother's immunity to many diseases. That immunity wears off starting at about nine months. If the child is vaccinated too soon — while the mother's immunity is still in place — the vaccine won't properly take. But wait too long and you're prolonging the dangerous in-between period when the child is totally unprotected.

It's a difficult balance to strike in any country — but it's a particularly tough call in poor countries, where the measles risk is so much higher because vaccination rates are lower.

GAVI is also grappling with a scheduling challenge posed by the development of newer vaccines that must be administered long after a child is born. The vaccine for HPV must be given at age nine or above, for instance. A vaccine for malaria that is currently in development will likely need to be given at fifteen months up through age two.

That's a problem because while parents in poor countries often know to bring in their babies for a checkup in the weeks and months after they're born. But there's often no mechanism in place to reach older children.

Meanwhile, for all the support for GAVI's work so far, Berkley says he worries the conversation in the United States could start to negatively influence the developing world. Given how high child mortality rates remain there, it's not as unusual for a kid to fall seriously sick soon after getting a vaccination. The cause is unrelated to the vaccine but in such instances, it's natural for parents to want answers.

And, says Berkley, "what do people do everywhere in the world? They get on the internet and look, and then all of the sudden there's a sharing of misinformation."

That's a worry for Berkley: "How we keep that spread from occurring — that spread of fear of vaccines — is something that does keep me up at night."