Accessibility links
Saving For A Wedding When You Make 53 Cents A Day : Goats and Soda Even people who tread the line between deep and extreme poverty can manage to pull off a wedding. For one woman in Bangladesh, it took clever planning and seizing every opportunity.

Saving For A Wedding When You Make 53 Cents A Day

Saving For A Wedding When You Make 53 Cents A Day 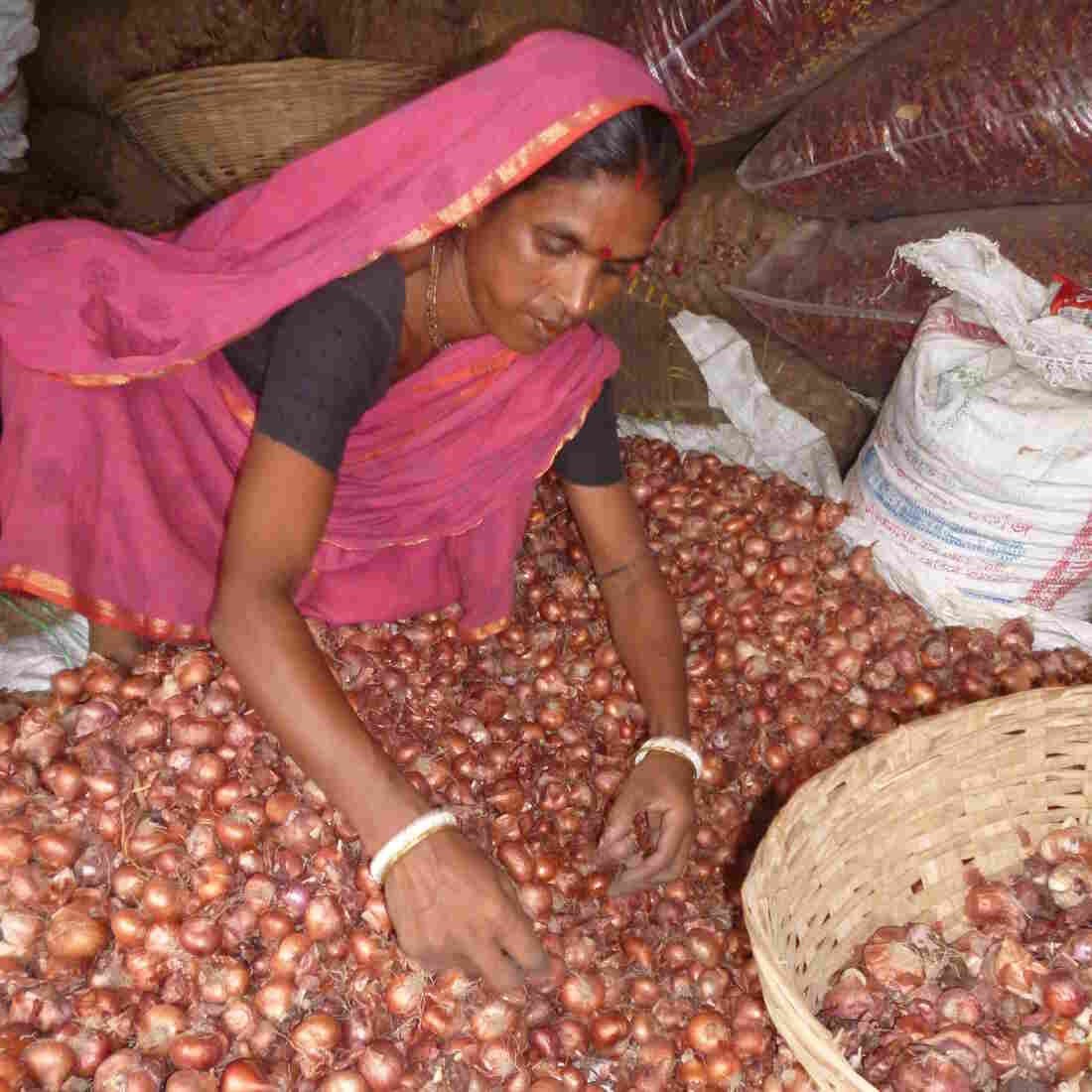 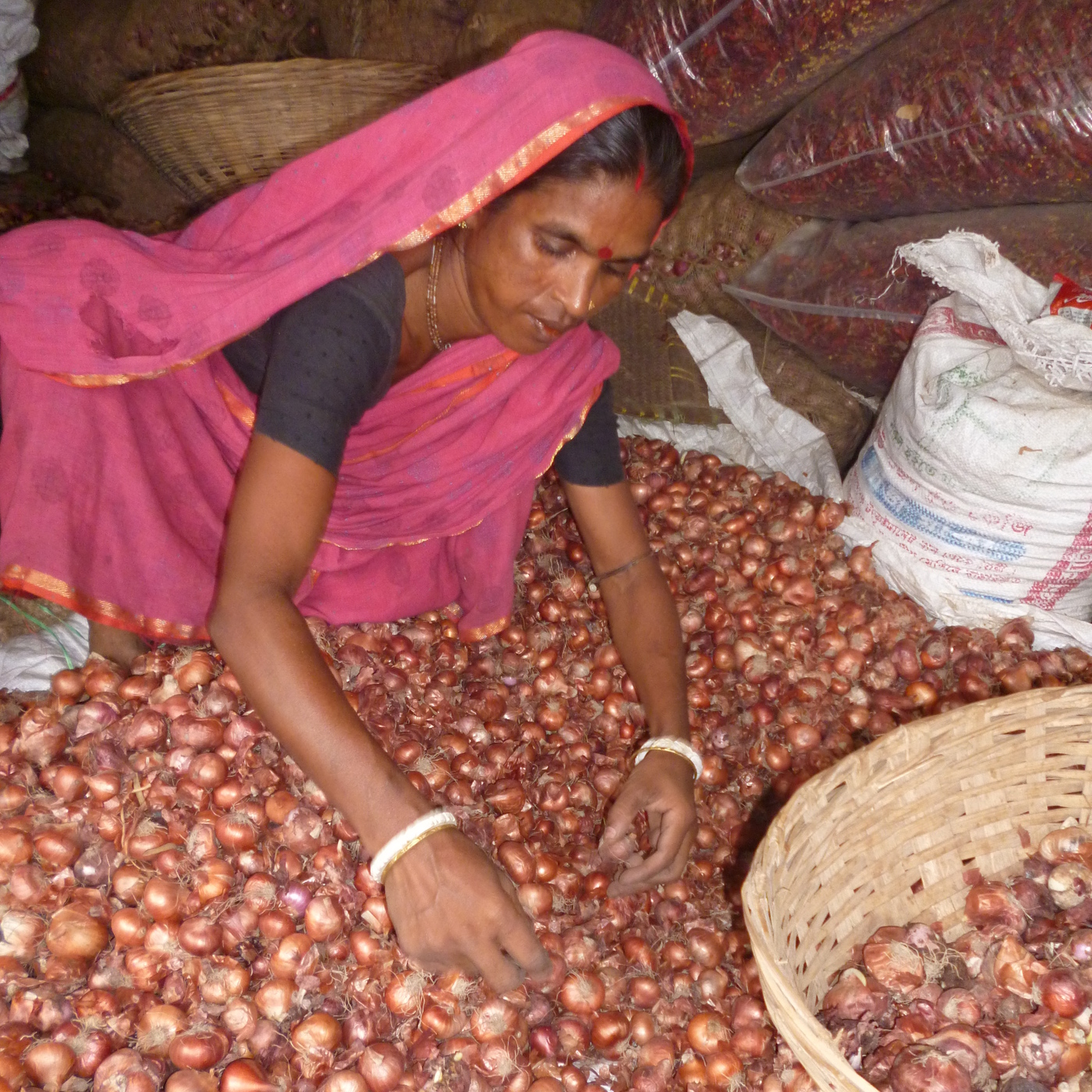 Kamala Rani sorts vegetables at the market in Kapasia, Bangladesh.

The thought of paying for her daughters' weddings has haunted Kamala Rani for years. When it came time for her older daughter to get married two years ago, she was up against the biggest cost of her life: $320.

This might seem like peanuts to an American audience used to hearing about weddings costing tens of thousands. But consider this: Rani and her family in Bangladesh each live on the equivalent of about $1.50 a day, treading a very thin line between deep and extreme poverty.

Last month, the United Nations approved a plan aimed at wiping out poverty. Rani, who told us her story by phone, knows what it's like to live in deep poverty. Despite her extremely limited means, she still managed to throw a good party, she says.

Each day, Rani wakes up in her one-room, 10-foot-square home at 6 a.m. to an already noisy village, punctuated by a Muslim call to prayer.

She lives the village of Rishipara, which roughly translates to "untouchable neighborhood," outside the market town of Kapasia in Bangladesh.

Rani, 48, and her family are in the Rishi caste, also known as the "downtrodden." It's the lowest caste, and members of it were historically regarded as "impure" or "untouchable," relegated to jobs like leather-working and sweeping streets. Their home has corrugated tin walls and roofing. There isn't an outhouse, so they use their neighbor's.

Rani primarily works in the market sorting vegetables for shopkeepers, but she also works as a housemaid. Since her husband was injured a few years ago loading rice sacks, she is the primary earner and money manager in her family, bringing in about 53 cents a day. According to a calculation that economists use to define poverty levels, that's about the equivalent of living on $1.50 per person a day in the U.S. Rani often borrows money interest-free from neighbors to help make ends meet.

She works from around 7 a.m. until sometime between 8 and 10 p.m., depending on her housemaid duties or when the market bustle winds down. For dinner, she eats rice and vegetables or lentils and small curried fish, if she can afford it. Her favorite food is freshly soaked soybeans, fried in oil. Rani buys more when food prices are low and less when prices are high. At the end of the day, she bathes in the Shitalakshya river before returning home to her family — her husband and two of her three living children.

Her fourth child died recently after he fell ill one day. He had argued with an older boy in the neighborhood, and that boy had just died suddenly.

"So, we thought it was a curse from that," Rani explains. "Because of this quarrel, he came back to haunt my son."

They took Rani's son to a faith healer but he didn't get better. They had planned to take him to the hospital — it's a 15-minute walk away — but he died in the morning before they had the chance.

These days, Rani's daughters occupy her mind. Specifically, their weddings.

If You're Poor, There's No Way To Save Money, Right? Wrong!

Rani's biggest financial feat was paying for her teenage daughter's wedding — a daylong event two years ago with 40 guests that cost about $320, plus a gram of gold as a dowry. To pay for it, she saved up a small amount of money and then repeatedly lent her savings to neighbors and friends, charging them interest on the loan. She borrowed the gold for the dowry from her sister-in-law, who will demand it back when it's time for her own daughter's wedding. She took a microcredit loan from an NGO to pay for the chicken and rice meal and the tables.

"It was a big feast. The [Hindu] priest came to officiate and everyone dressed up in their best clothes," she says. "It was a very happy event. We covered everything with cloth to make it look good." Cooks made chicken and rice with oil in big aluminum pots. A traditional band played and sang, with drums, cymbals and pipes. The party lasted late into the night. "It kept everybody awake," she says.

That daughter now lives in a nearby village. To visit her, Rani saves bus money in an unglazed ceramic pot with a slit in the top, breaking it when it's time to make the $3 round trip. Her last visit was about six months ago. She's still paying off loans for the wedding.

Even though there are eight years until her younger daughter reaches the legal marriage age, Rani says she lies awake at night wondering how she'll pay for her wedding.

But, she says, there's no option to do it any other way, "because that's what a marriage is."

Many thanks to Stuart Rutherford and Kalim Ullah for their help coordinating this conversation.