Accessibility links
Facing The Challenge Of Reporting And Keeping At-Risk Sources Safe : Goats and Soda While covering gang violence in El Salvador, an NPR reporting team faced tough questions about how to get people's stories while protecting them from the potentially harmful repercussions of talking.

Facing The Challenge Of Reporting And Keeping At-Risk Sources Safe

Facing The Challenge Of Reporting And Keeping At-Risk Sources Safe 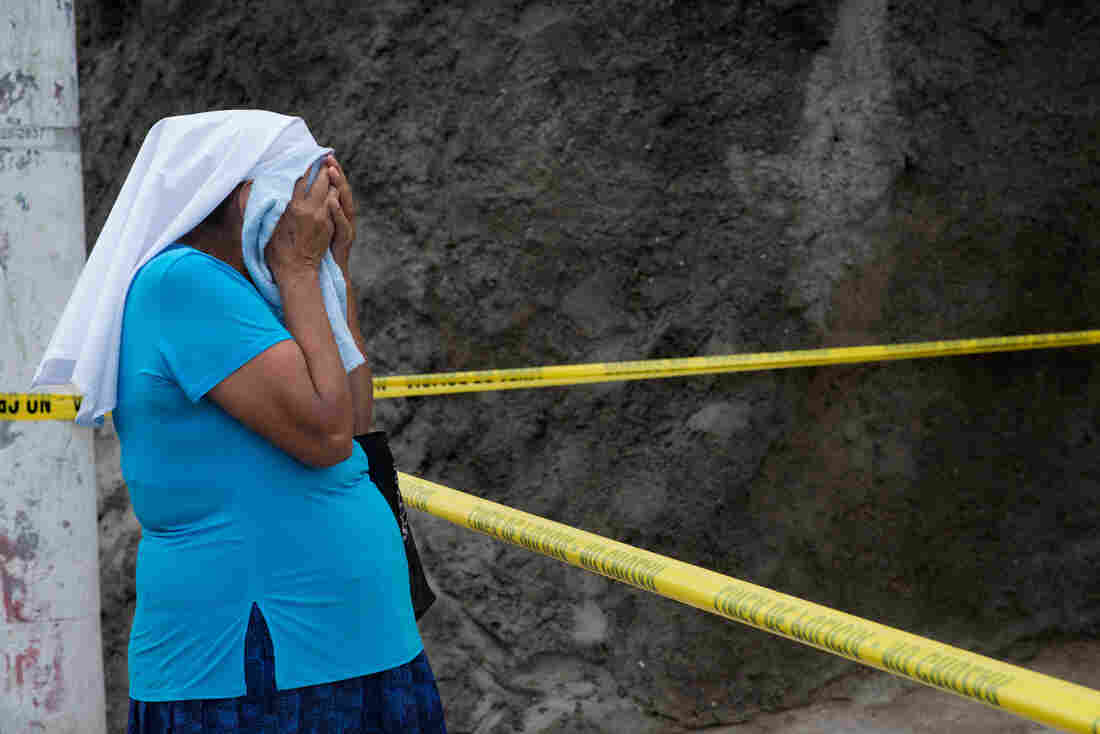 A grandmother cries at the scene of her granddaughter's murder by suspected gang members in San Salvador. Encarni Pindado/for NPR hide caption 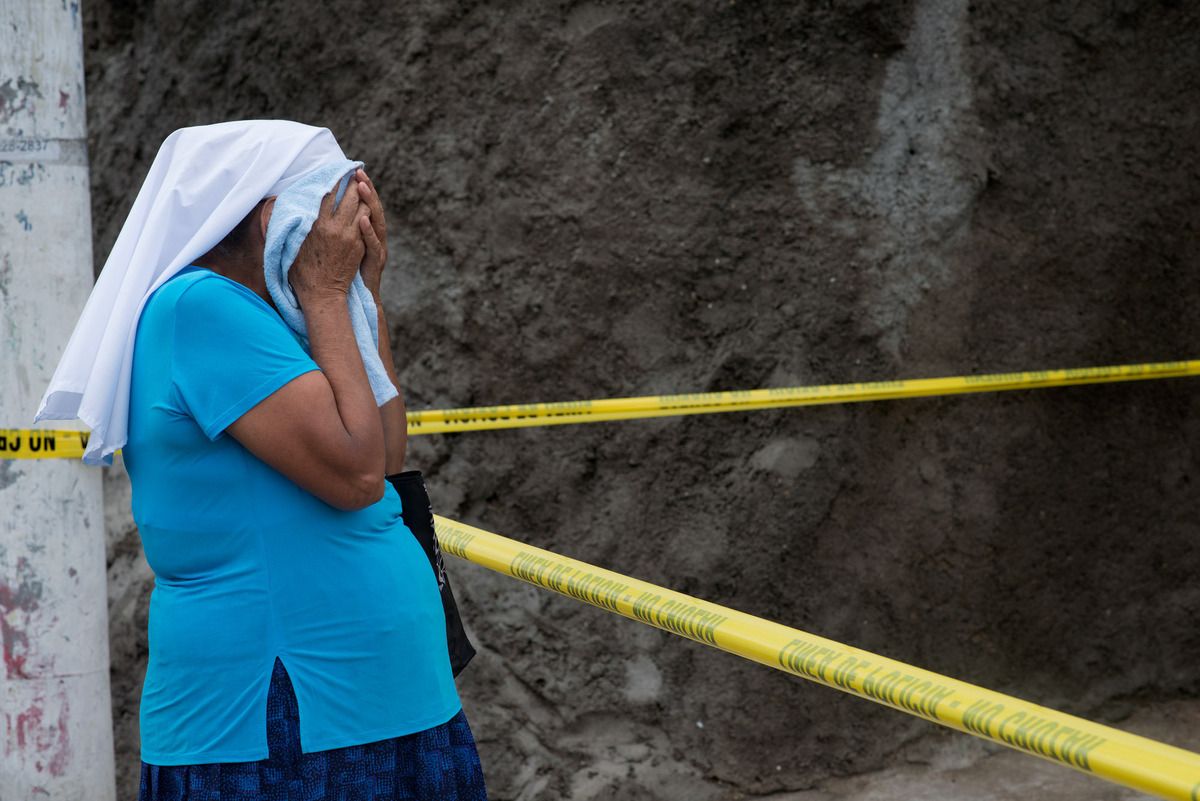 A grandmother cries at the scene of her granddaughter's murder by suspected gang members in San Salvador.

Shortly after NPR's team of journalists — Kelly McEvers, Encarni Pindado and I — arrived in El Salvador to report on how young women are being affected by gang violence, we received a grim phone call from a local colleague who knew about our assignment.

He told us a 15-year-old girl had been shot dead in broad daylight on a main avenue.

Her name was Marcela. When we arrived, her body lay by a busy avenue clogged up by slow morning traffic. She looked almost peaceful, like she was resting, her legs on the avenue, her head on the curb.

Drivers seemed unfazed; a young cook wearing an apron complained to the police, who had cordoned off the scene. He needed to pass through or else his food would go bad. Soon, he revealed there was more to his insistence than only this concern: He couldn't go around the block, he explained, because the next street over belonged to a rival gang.

You can't pass, they told him.

Down the block, Marcela's mother and older sister sat in a car, sobbing. Marcela's younger sister was missing from the scene: She'd been taken into police custody for questioning. She had been walking so close to her sister when Marcela was shot point-blank in the head that she had gone temporarily deaf.

The girls had been heading to work and had crossed into a rival gang's neighborhood. It was something that they couldn't help doing every day — they simply worked in one zone and lived in the other. This is a logistical nightmare thousands of Salvadoran workers and students face on a daily basis, we were informed. Marcela's sister was now a witness to murder. In El Salvador, where August saw more than 900 homicides, this can be a death sentence.

Marcela's was a death foretold. Her boyfriend, a bus driver, had gone missing months ago and she had been getting threats for months. Her mom said she didn't know why.

The family told us they were thinking of fleeing the country.

We wanted to tell their story — and the family agreed. The more they spoke, the more it seemed like a catharsis for them. Their story was pretty symbolic of the crisis of violence that affects Salvadorans. And it was representative of how young women often get helplessly entangled in gang wars. Here, it seemed, there was no moving on past a teenage mistake of hanging out with the wrong boy — or the reality of living in the wrong neighborhood.

But we also knew that identifying this family could get them all killed.

You often hear how journalists risk their lives on assignment. But, on this assignment, we were also quite concerned about keeping our sources safe.

Several days after her murder, Marcela's family invited us to come interview them in their house. From a journalistic standpoint, this was important to our story: They lived in an impoverished area, and being there could help illustrate how gang members, themselves poor, prey largely on the poorest sectors of society. It's a war among lower classes, in which the wealthy are largely unscathed.

The problem, though, is that there are very few areas of San Salvador that are not dominated by one gang or another. Hundreds of colonias, or neighborhoods, are guarded closely by gangs. There's a feeling of claustrophobia when you go into these neighborhoods: They are often connected to the rest of the world by one twisting, narrow street, which is surrounded by a dense wall of makeshift houses or thick bush. The rest is a labyrinth of alleys. Gang members as young as 7 years old serve as "posts" at the main entrance to the neighborhood, eyeing who comes in and out and reporting to their superiors.

If three foreign women came into this neighborhood — and into the family's home — how much danger would we be putting them in? Possibly a lot: It would have become fairly obvious that the family was talking to the media.

We decided not to go to their house.

When I got back from El Salvador, I sat down to talk to Mark Memmott, NPR's standards and practices editor. He confirmed that we'd made the right decision:

"One of our core principles is respect for audience and people we encounter. We can't go into a small village and get people to share the most intimate, dangerous details of their lives and then blithely leave and not worry about the consequences. In some of these cases, people are going through an enormous amount of trouble to talk to us. They are risking that others will find out. It's basic decency."

Some may ask: Why did the family invite us in the first place, if it was so risky?

NPR's Lourdes Garcia Navarro, currently based in Brazil, said that for a lot of people, especially those who are oppressed and afraid to speak out, speaking to media is exciting. "For some people, talking about it may be the only way they can feel empowered about something that has happened to them," she said.

But, she explained, it's important to not let that sense of excitement mask other concerns. "We have to protect people from themselves, especially regular people who may not understand how their words can be used, and the repercussions they may have," she said.

NPR correspondent Jason Beaubien recalled such an instance, in 2010, when he was reporting in a region of Mexico controlled by a powerful gang.

"One story that I had a really hard time with was about a reporter I met in 2010. This reporter desperately wanted the world to know how the local gang completely controlled every aspect of his town. He agreed to talk to me. We decided between us not to use his name or the name of the city where he worked. After writing the piece, I felt almost sick to my stomach. I couldn't bring myself to submit it to NPR. I kept thinking, 'If I air this story and then he gets gunned down, there's no way I can live with myself.' "

Beaubien eventually went back and interviewed the reporter again — but had him speak in English.

"His English wasn't great, but we felt it made his speech pattern much less recognizable. That story did eventually air and, to be honest, I was still terrified something was going to happen to him," Beaubien said.

NPR's policy is that we don't make up fake names. The reasoning behind this is that once we introduce one element of fiction into a story, it feels like a slippery slope.

In the end, we agreed to meet Marcela's family in a neutral location. We also dropped their last name. In a country with such a high average daily murder rate, a first name gets lost in the sea of casualties.

The assignment was probably the most difficult for our photographer, Encarni Pindado. She had the tricky task of conveying to the viewer a sense of the devastation this family felt — and of the senselessness of poor people preying on each other — while keeping everyone anonymous.

Fortunately, Pindado has been working in conflict areas for most of her career. One technique she frequently uses: She takes a picture that is blurry or has enough shadows so the subjects aren't recognizable. She then shows the subject the photograph. If he or she feels too exposed in the photo, she deletes it right there. That gesture creates a sense of trust.

When we did meet with Marcela's family, it was at a fast-food joint. After a snack, we drove around in a car. We ended up doing that routine quite a bit in El Salvador: meeting at a shopping mall, talking in a parking lot, chatting in a cab.

It isn't the easiest way to report. But it gives us the peace of mind that our interviewees will be safe, even after we leave. As we drove through the streets of San Salvador and Marcela's family told us their story — which echoes the desperation of so many Salvadorans today — we knew it had been worth it, speaking to them in a safe space. Toward the end of our drive, I turned to the grandmother, who had been quiet through most of our conversation. She'd been around longer than anyone in this car. She'd lived through war and peace. What did she make of all this?

She frowned sadly, the many lines on her leathery face folding, and told us it wasn't this bad during the war.