Accessibility links
A Teen Who Fled Syria Had High Hopes For Her Life In Lebanon: #15Girls : Goats and Soda Fatmeh is one of hundreds of thousands of children who have fled Syria with their families. In Lebanon, she works in the fields up to 14 hours a day, clinging to her dream of going to college. 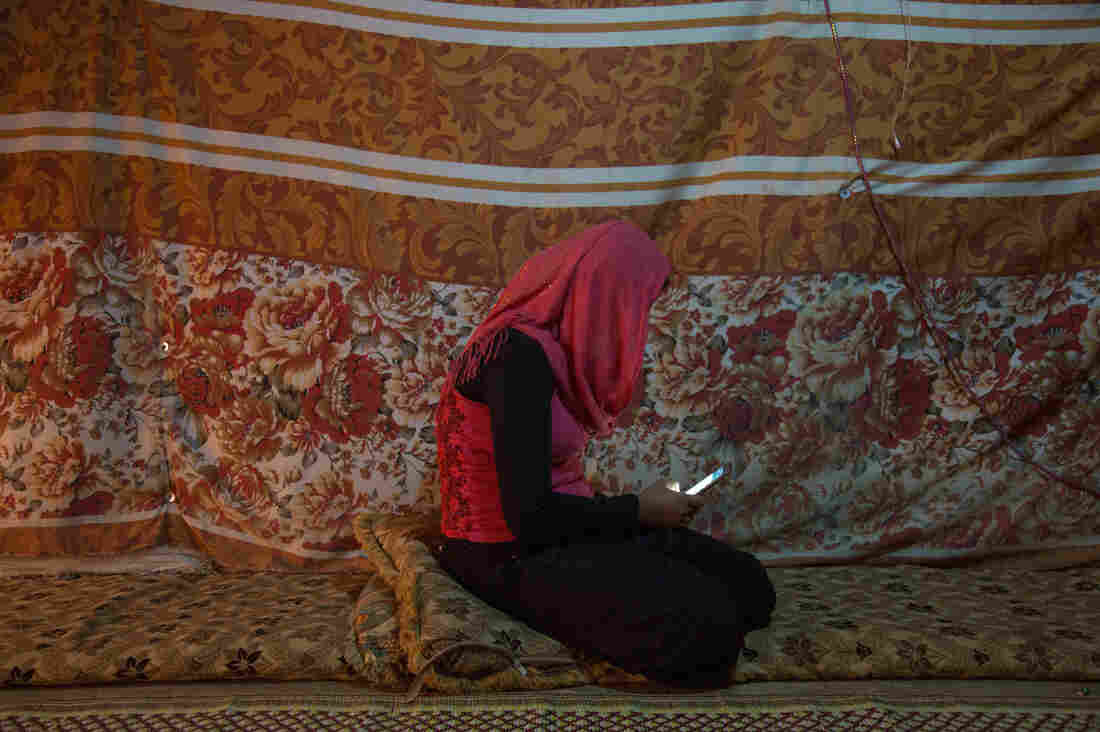 She's a teenager with a cellphone, surfing the Internet. And she's a Syrian refugee who works in the fields up to 14 hours a day. That's the new life of 15-year-old Fatmeh, seen here in the living room area of her family's makeshift shelter. Dalia Khamissy for NPR hide caption 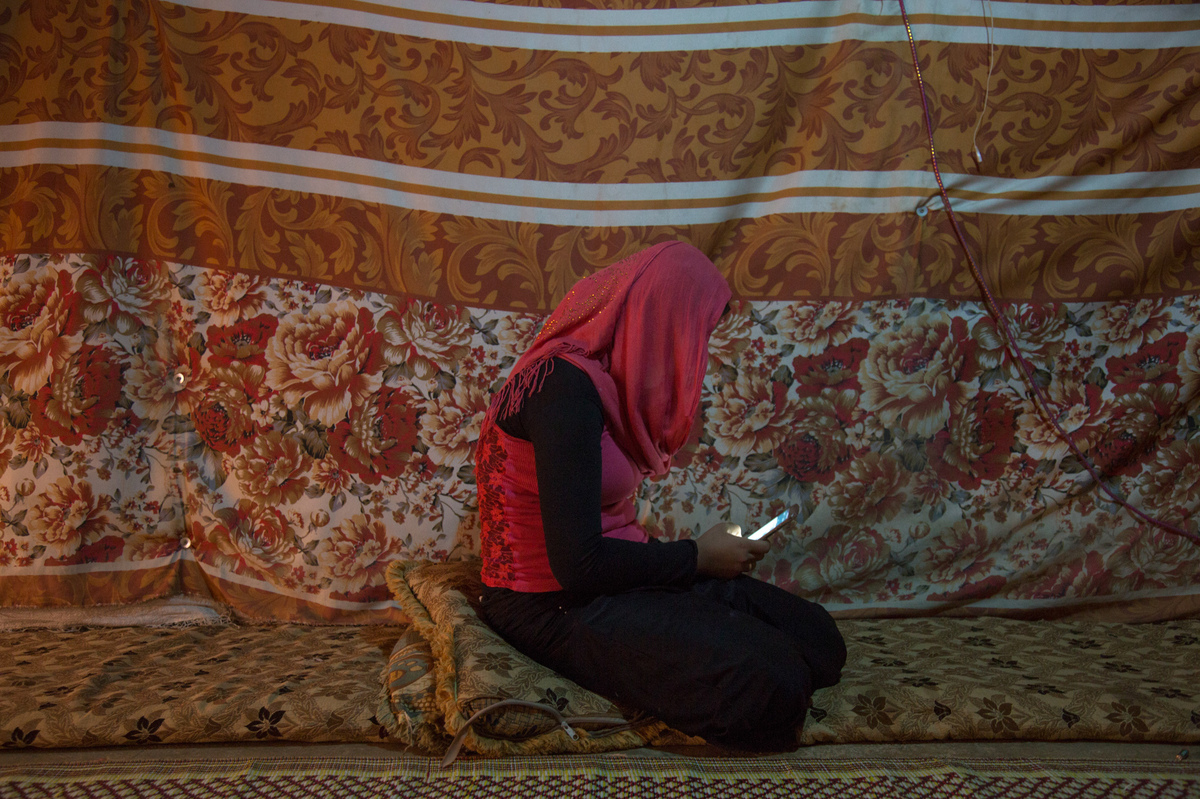 She's a teenager with a cellphone, surfing the Internet. And she's a Syrian refugee who works in the fields up to 14 hours a day. That's the new life of 15-year-old Fatmeh, seen here in the living room area of her family's makeshift shelter.

But that's what her life is about right now.

Fatmeh used to be a top student at her school in Syria. Now she spends her days working in agricultural fields in the fertile Beqaa Valley, picking vegetables, plucking weeds and tending crops. And when the foreman thinks that she and the other kids in the fields aren't working hard enough, he hits them with a black plastic pipe. 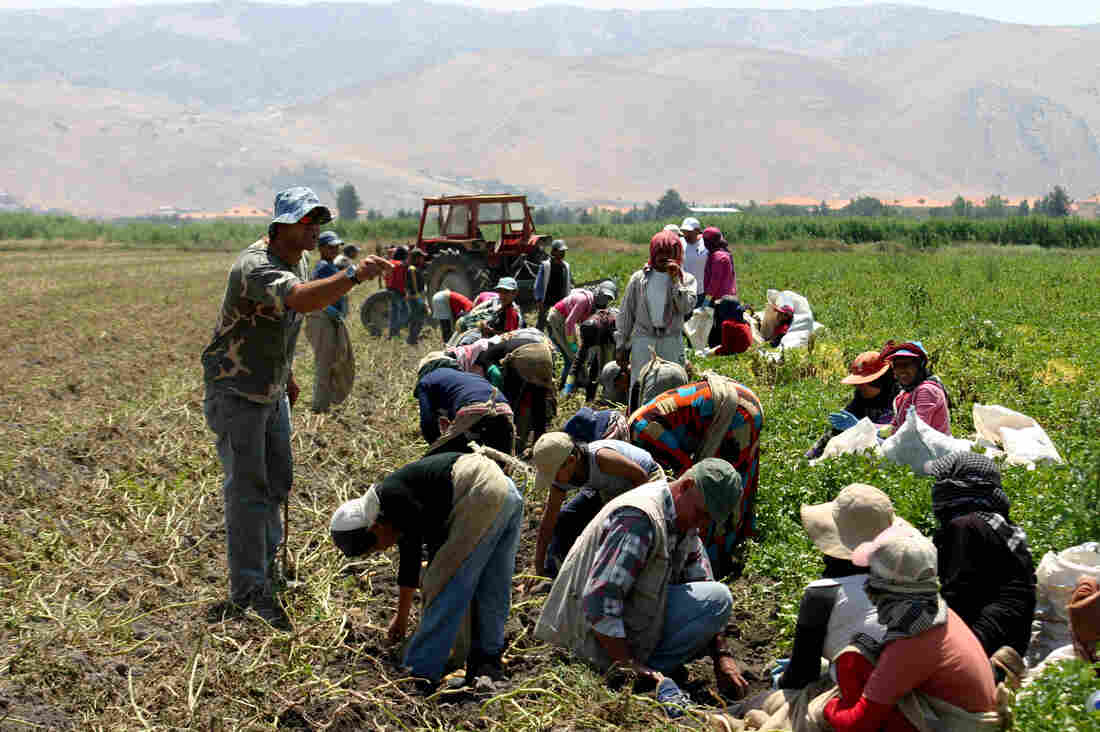 The Lebanese foreman yells at the children in his crew of Syrian refugees. They're picking potatoes in the Beqaa Valley in Lebanon. Whether the worker is a 45-year-old mother or a 7-year-old boy, the pay is the same: about $8 for a 12-hour day. Jason Beaubien/NPR hide caption

Before: Her Typical Teenage Life

Three years ago Fatmeh was pretty much a typical teenager. "My life in Syria was really very nice, very beautiful. I swear to God, really beautiful," says Fatmeh, sitting in the shack her family has built out of scraps of tarps, plastic sheeting and salvaged lumber. She fiddles with the ends of a black headscarf that loosely frames her face.

Fatmeh says back in Syria they had a big house surrounded by a garden.

Her father taught high school — geography, sociology, history; her mother looked after the family. Fatmeh had her own computer.

Her life was all about school — classes, friends and homework. She was a top student, and she loved Arabic literature. But slowly the civil war crept closer and closer to their town until finally there was fighting all around them

"Bombs and fighting were everywhere," Fatmeh says. "We lost a neighbor, a cousin and the husband of our aunt. The house next to ours was bombed. So we left to survive."

The family ran west, with Fatmeh and her older sister clutching their younger siblings.

They walked for a day through fields and slept with a group of shepherds. Finally they caught a ride, standing up in the back of a truck, to the Lebanese border.

They wound up in Lebanon's Beqaa Valley, nestled halfway between Damascus and Beirut. The valley is Lebanon's wine country and agricultural breadbasket. Now it's also home to hundreds of thousands of Syrian refugees, living in makeshift shelters in informal camps. "We want to go home, to Syria," says Fatmeh. By "home" she means to a Syria before the civil war. 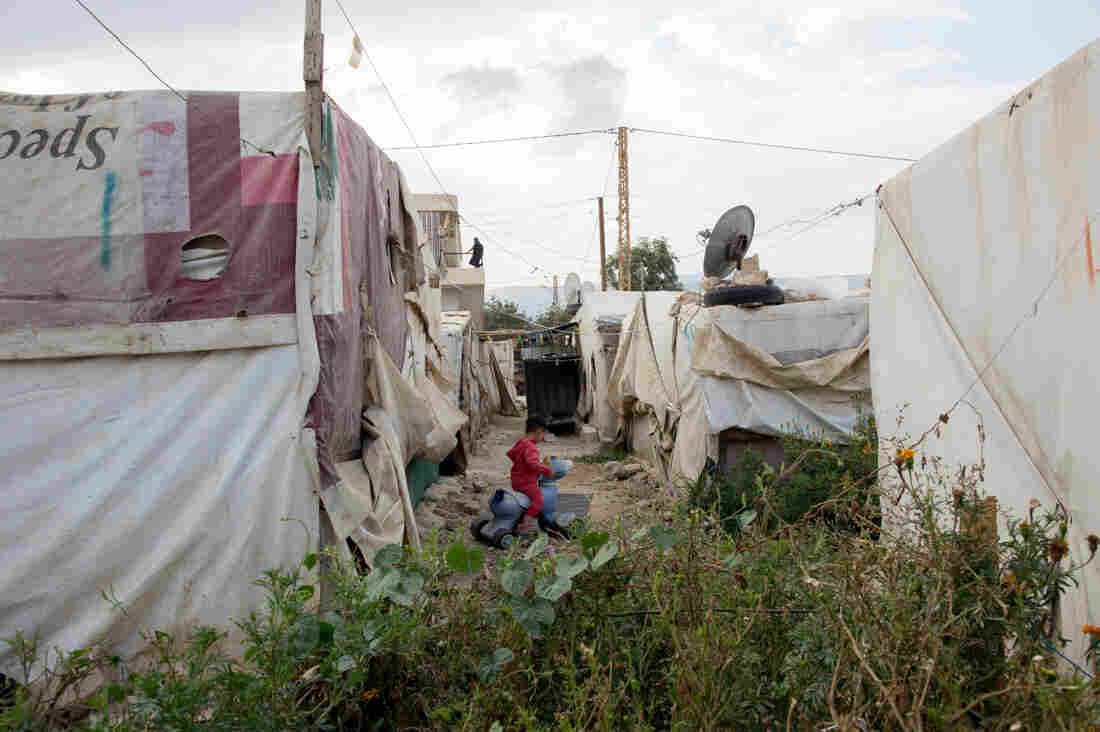 A Syrian child plays outside his tent in the informal refugee settlement where Fatmeh lives with her family in eastern Lebanon's Beqaa Valley. Dalia Khamissy for NPR hide caption

"I had a dream that when I came here to Lebanon I would study here and go to school here and become an Arabic language teacher here," says Fatmeh, sitting on the floor of the shack she shares with her parents and six siblings. "And then [I hoped] when I go back to Syria, my dream would have been achieved. But it did not work at all with me here."

Now her life is consumed by work in the fields and work at home cooking, cleaning and tending to her younger siblings. Her parents don't allow her to go out in the camp alone. Her one link to the outside world is her cellphone. She uses it to keep up with news about Syria, and sometimes when she's alone she likes to record herself singing songs about her homeland.

Fatmeh prepares lunch for her mother and her six siblings in the camp. Dalia Khamissy for NPR hide caption

Fatmeh's mother, Chowk, says she wishes her children could go to school but her family has few options.

Fatmeh's family is mired in debt. When they arrived three years ago, a Lebanese landowner offered to help them. He paid off the driver who ferried them from the border. He let them camp on his land next to hundreds of other Syrian refugees. He lent them money to buy materials to build a meager shelter. He offers them food on credit at his store.

Fatmeh and her family are paying him back with the only thing they have — their labor.

She and four of her siblings work up to 14 hours a day in the landowner's fields, but the family still owes him roughly $2,000, according to Chowk. They've asked that we not use their last name out of concern for their safety and the safety of family members still in Syria.

The landowner, Fadel Yassine, has the leathery skin of a man who has worked long hours in the sun and smoked since an early age. Sitting in his small grocery store, with shelves of tinned meats and beans behind him, Yassine says he's been incredibly generous to the Syrians.

"Look, look at this," he says as he pulls out a thick black ledger. Inside the book he keeps a tally of how much each refugee family owes him.

"I have been patient with them, but the debt is growing and I need my money," he says.

He says he's the only one helping them. This isn't entirely true, but it is true that international food aid to the refugees this year was cut sharply.

When we ask specifically about Fatmeh — how much she earns, how much her family owes — Yassine waves his cigarette impatiently in the air.

"Everyone is Fatmeh! All of them are Fatmeh," he yells. He insists that Fatmeh is no different from the hundreds of other Syrians living on his land.

Fatmeh and her siblings work seven days a week in Yassine's fields. At 5:30 in the morning they climb into the back of a truck that later in the day will be loaded with sacks of vegetables. Some days they pick onions. Other days it's cucumbers or potatoes. If there's a lot of produce to harvest, they often work until 7 or 8 at night. On a typical day they finish at 3 in the afternoon. Fatmeh earns roughly $8 for a day's work — although she never sees the money. The landlord subtracts her wages straight from her family's debt.

For Fatmeh, the labor is exhausting and some days she's too tired to go back to the fields.

On a bright Saturday morning we go to one of Yassine's fields to look for Fatmeh.

Yassine's son, Nazir, is overseeing a crew of roughly 30 Syrians picking potatoes. Some are women. Most are children, including several of Fatmeh's siblings.

Fatmeh had showed up for work in the morning, but left early because she was feeling ill.

The youngest child in the field is 7 years old.

"The foreman, he loves the younger children because they are faster in collecting," says Fatmeh's older sister, Bouchra. Bouchra is 18. Like many of the older girls, she has wrapped a scarf across her face to block out the sun and the dust.

"They like the children because they're faster," Bouchra says. "Parents don't like it, but they are forced to send their children."

Foreman Yassine walks through the freshly plowed dirt of the potato fields twirling a stiff piece of plastic irrigation hose. The children call the hose "the stick." If the kids slow down or space out, Yassine hits them. 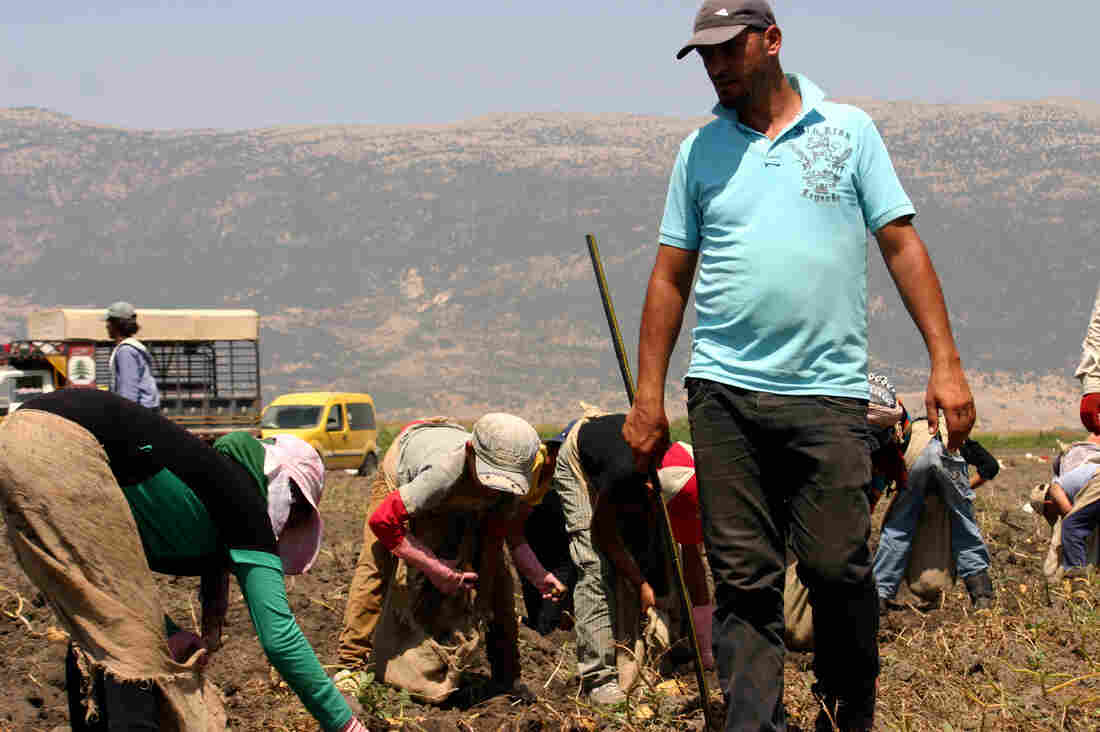 Foreman Nazir Yassine keeps an eye on a crew of Syrian refugee children picking potatoes. Refugees and children are not legally allowed to work in Lebanon, but landowner Fadel Yassine, Nazir's father, defends employing them: "What am I going to do? Let them starve?" Jason Beaubien/NPR hide caption

"This stick does not hurt your body," Yassine explains after striking an 8-year-old across his back. "But for children, it's a tool for making them feel afraid. You know, children are young and they get afraid easily, so [with this] they can work more. It does not hurt at all; don't worry about the kid."

Minutes later when a 9-year-old stands up straight instead of scrambling to get more potatoes, Yassine yanks the boy by the ear. The boy yelps and collapses in the soil. As much out of humiliation as pain, the boy buries his head in his forearms, sobbing.

The boy's mother, who's also working in the field, looks away.

This bleak life in Lebanon hasn't totally beaten down Fatmeh.

She says she still has a "very small hope" that someday she'll be able to return to school and eventually go to college.

"Very small, small hope," she says. "I really want to go back to school."

But with no end in sight to the Syrian civil war, this 15-year-old's dreams are withering away in the fields of Lebanon's Beqaa Valley.

After lunch, Fatmeh cleans the tent where she lives with her family. Her new life, she says, is "work, work, work." Dalia Khamissy for NPR hide caption