Accessibility links
Jane Goodall Wants To Save Us (And Her Beloved Chimps) From Ourselves : Goats and Soda She's learned a lot about chimpanzees. But what has she learned from them has given her a new mission: improve the health of the planet. 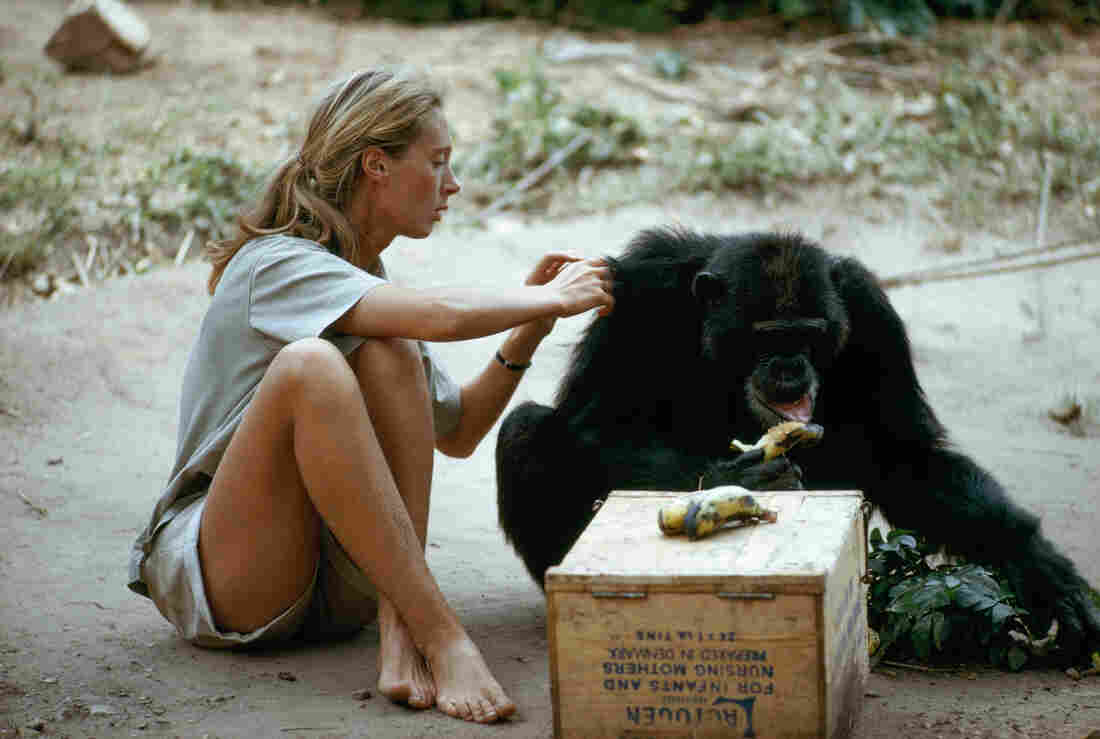 Jane Goodall grooms the coat of a chimpanzee as he eats a banana in this photo from 1974. Hugo Van Lawick/National Geographic hide caption 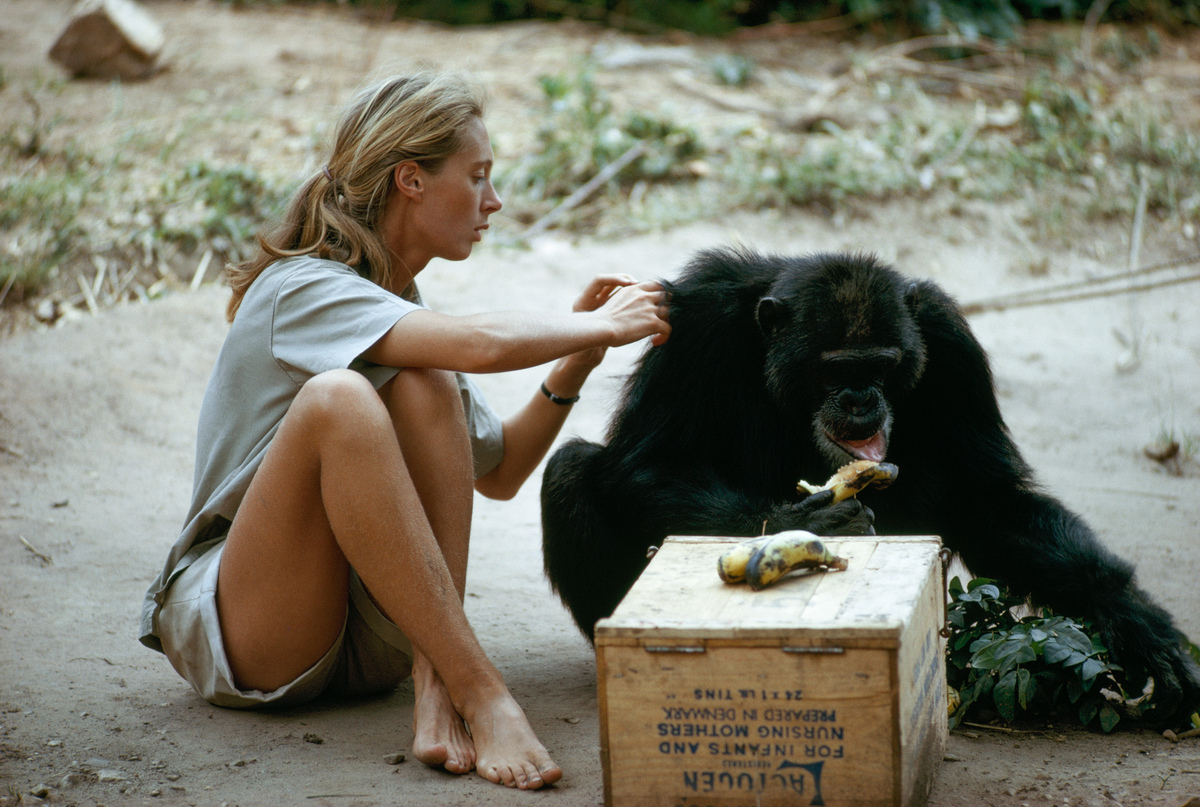 Jane Goodall grooms the coat of a chimpanzee as he eats a banana in this photo from 1974.

And she's putting those lessons into practice.

That's what she explains after giving a lecture at the U.S. State Department. 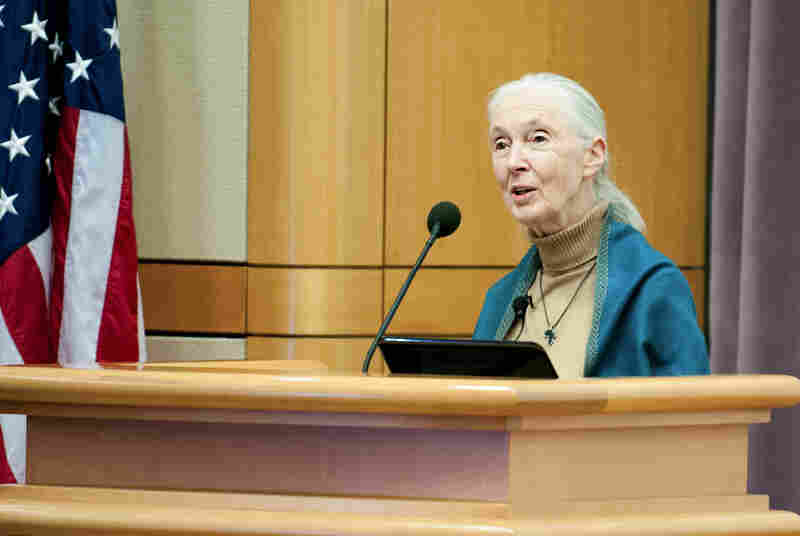 Jane Goodall spoke at the U.S. Department of State this week. Courtesy of Mark Stewart/U.S. Dept. of State hide caption 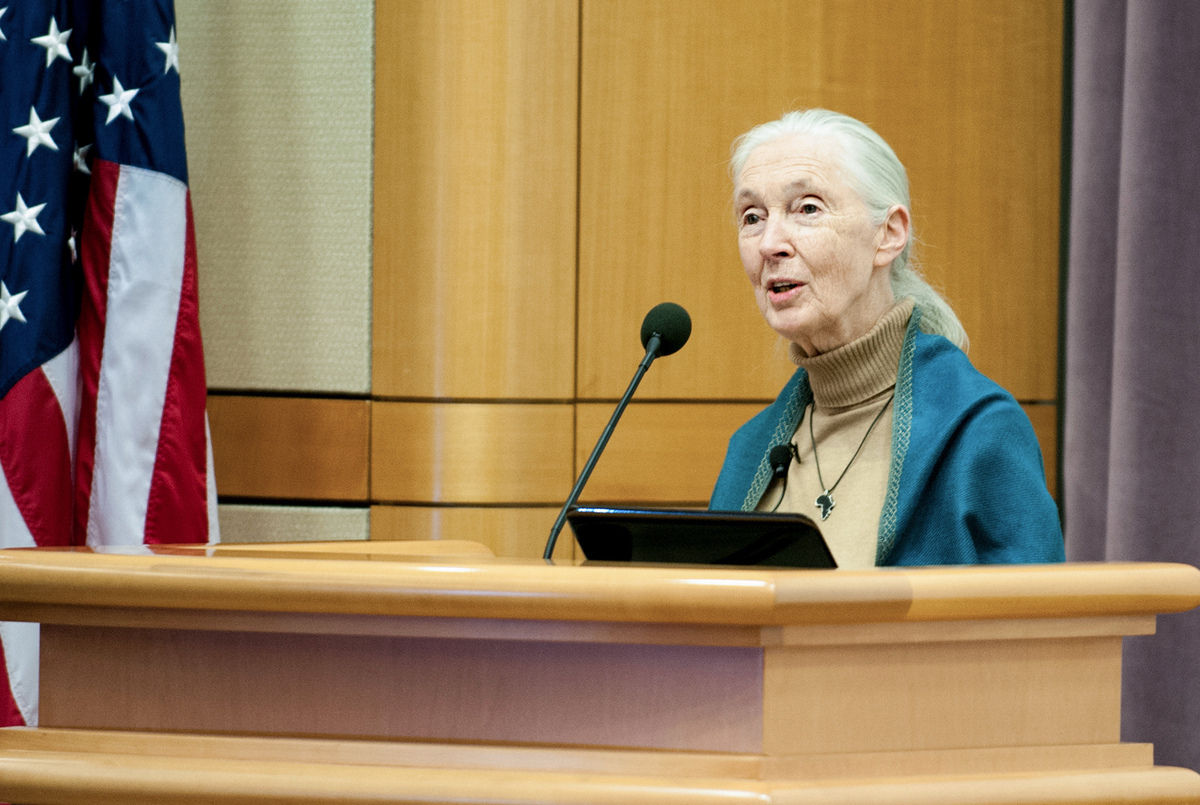 Jane Goodall spoke at the U.S. Department of State this week.

"One thing I've learned from the chimpanzees is the importance of early experience," says Goodall, who at 81 is soft-spoken and casual in khakis and a ponytail. She's just finished an hour-long talk at an event hosted by the Office of Global Health Diplomacy, and took a few minutes to chat with Goats and Soda.

Goodall spends about 300 days a year talking to the public about chimpanzees, but on this day she had a different topic: the connection between conservation efforts and extreme poverty.

And what's the chimp lesson?

"[Chimpanzee] offspring who have a good mother — who is protective but not overprotective, affectionate but above all supported — will do better later in life than those who have less good mothers," she says. "If [human] children are taught the importance of conserving the environment and showing respect for all life, particularly respect for all animals, then they will grow up automatically being better stewards."

Jane Goodall On How Chimps Treat Their Women

"Female chimps are very definitely the subordinate species. the males dominate and male can actually force a female to follow him on what we call a 'consort trip,' and he can be quite brutal if she won't follow. There's a lot of chimp behaviors which we seem to have somehow brought with us in our long evolution pathway from the time we shared an ape-like, human-like common ancestor 6 million years ago."

But she's seen that children who grow up in extreme poverty can easily lose sight of the value of the earth. And that leads to many problems — including a threat to the well-being of her beloved chimps.

For Goodall, the importance of conservation became crystal clear in a single moment in the early 1990s.

She was in a small airplane flying over Tanzania's Gombe Stream National Park. When she looked down, she was shocked by what she saw.

Hill after hill had been stripped of its dense blanket of trees, the habitat for chimpanzees.

"I knew there was deforestation around Gombe," she says. "I wasn't prepared to look down on completely bare hills."

There were more people living in Gombe than the land could support, she explains. The villagers were too poor to buy food from elsewhere. They had cut down the trees for money to feed their families.

There were other problems. The soil had been over-farmed and had become unproductive. People were struggling to survive.

"That's when it hit me," she says. "There's no way we can even attempt to save these precious Gombe chimpanzees unless we could improve the lives of the people living around that last little oasis of forest."

Goodall realized that she needed to work with the communities surrounding these national parks if she wanted to protect the chimpanzees.

Talking to village elders and women, Goodall and her team learned that what the communities needed was food. And so they started a program called Tacare. The goal was to restore the fertility of the overused land so the locals wouldn't go into the national park for resources.

Once their trust was earned, they expanded their programs to improve access to health, education, make small loans and even help with family planning. The emphasis was on bettering the lives of girls and women, who are often in charge of farming the land.

The Jane Goodall Institute now has conservation as its primary focus, along with the protection of great apes. The motto of the Institute: "Until people are at the center of conservation, we will not conserve the environment."

"We're all interconnected, and gosh, you learn that in the rainforest — the lungs of the world!" she says.

Goodall also had time in her talk to share her thoughts on a wide range of issues, including Twitter, climate change deniers and robots on Mars. She expressed skepticism on the effectiveness of big global agreements like the U.N. Sustainable Development Goals — and faith in the resilience of nature.

Here are some of our favorite quotes:

"They're a strange breed, aren't they? I've been to Greenland and stood by that great ice sheet with Inuit elders, who said when they were young, that ice sheet did not melt even in the summer. I've seen the glacier on top of Mount Kilimanjaro disappear. The speed in which this is happening is unprecedented and is very frightening."

On big global plans to save the world:

"Hopefully this [climate change] conference in Paris will create some new impetus. But a government can sign on, then the next president is elected and he overturns it. How do we enforce the legislation that leaders say they'll implement? Agreements and goals were set before, and very few of them had been reached in time frame that was committed. Will the new [U.N. Sustainable Development Goals] be different? It depends on us."

"When I was part of the climate march this time last year, the organizers expected 80,000 people. In fact, there were almost 400,000. What made it suddenly grow like that? There were people all around me with their little iPhones, their tablets, their iPads — they were tweeting and twittering. And people were talking: 'There's going to be a lot of film stars. DiCaprio's here.' And I heard one of them say, 'Jane Goodall's here.' "

"How is it possible that the most intellectual creature to ever walk planet Earth is destroying its only home? The photographs obtained by that little robot that's crawling around the surface of Mars makes it very clear that the planet is not a hospitable environment for human colonization. We have to make do with planet earth, and planet earth has finite natural resources."

"Every time I look at a small child, I feel ashamed of my species when I think about how we've harmed the planet since I was their age. Is it true there's nothing we can do about it? But to slow down climate change, restore health to destroyed habitats, save animal species ... yes, we can do those things."

On the resilience of nature:
"If we give it a chance, and maybe some help it can be restored — not as it was before — but it can once again sustain life."

Note: The interview and comments were edited for length.