Accessibility links
Why Lea Of Lebanon Wants To Leave Home: #15Girls : Goats and Soda She's a typical teen — blue nails, loves Coldplay. But she believes she won't be able to build a life in her homeland. 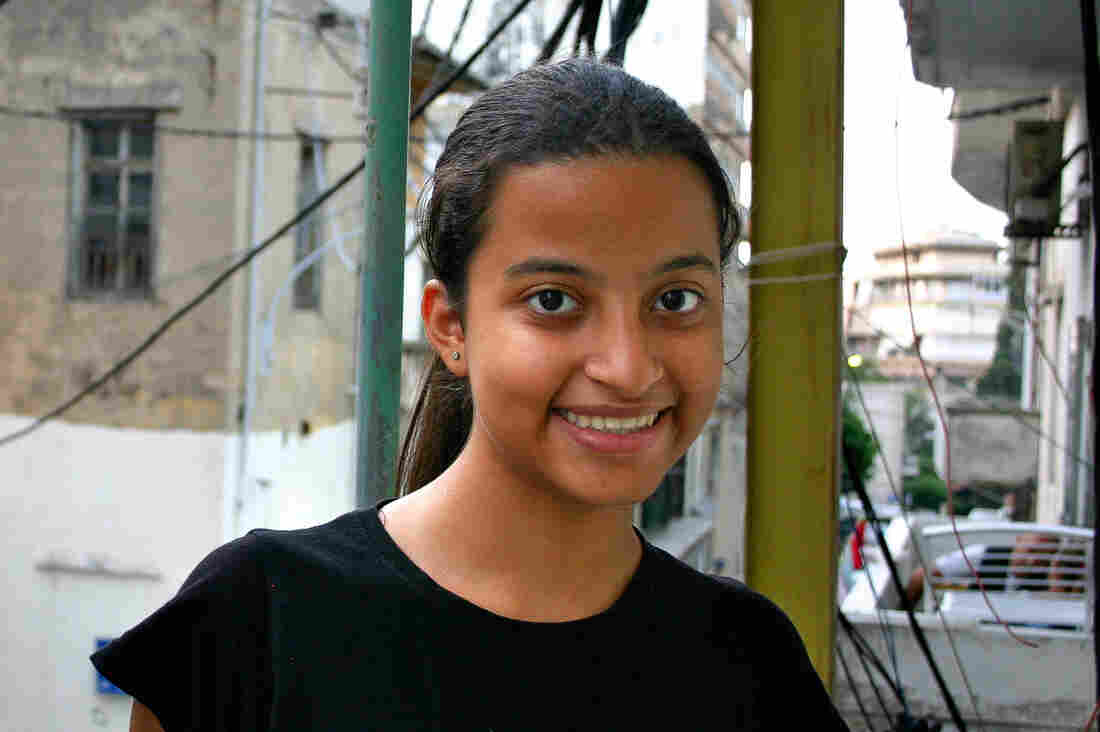 Lea Hatouni is a Christian living in the predominantly Muslim Middle East. Like so many other Lebanese, she expects to have to leave Lebanon to start her career after college. Jason Beaubien/NPR hide caption 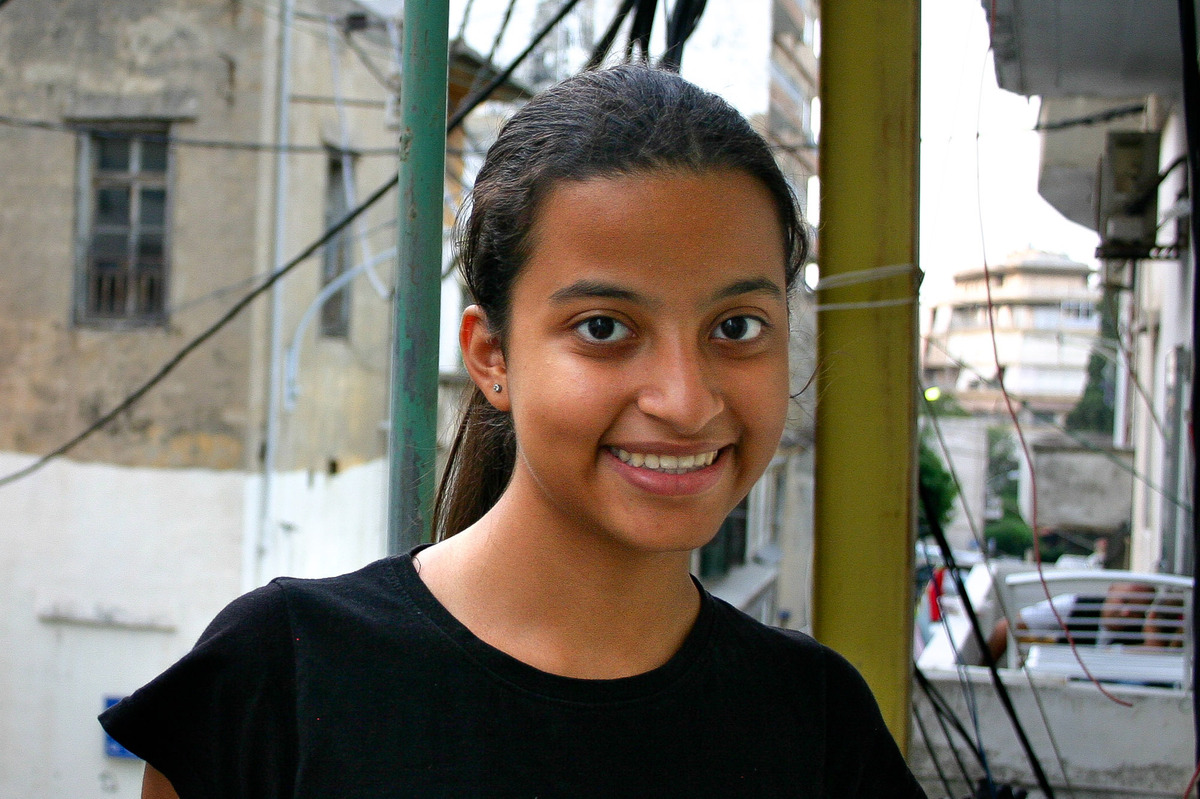 Lea Hatouni is a Christian living in the predominantly Muslim Middle East. Like so many other Lebanese, she expects to have to leave Lebanon to start her career after college.

Lea Hatouni is like a lot of other teenagers around the world. She likes music and hanging out with her friends. Her favorite band is the British rock band Coldplay. When she has free time she stops by the snack shop where her brother, Kenny works. "I talk to Kenny. We laugh and put on music. We start to dance and doing crazy stuff," she laughs.

And she loves to paint her fingernails her favorite color-- dark blue.

Right now, she shares a bedroom with her four siblings. She fantasizes about a room of her own. "With a big closet full of dresses and clothes," she laughs. "And I'll have my own window and my own bathroom!" One day, she hopes to become a translator and travel the world.

But there's an edge to these adolescent dreams. Hatouni is a Christian living in Beirut, Lebanon, a part of the world dominated by Islam. Her family is crammed in to a small two-bedroom apartment in Achrafieh, the city's Christian section.

The war in Syria is raging just 50 miles to the west. Her own city still bears the scars of a civil war that split Beirut along religious lines. Money is a constant concern for Lea's family. Good jobs are in short supply. Which makes her worry about her future. Lea understands that to be successful in Lebanon ...she's got to focus.

"After school we don't have a lot of time to waste, we need to study," she says.

Lea is in the 9th grade. Her public school sits just a few blocks from her apartment.

St. Georges Orthodox Church is also a short walk away.

"Every Sunday we come here to the church to pray," Lea says about her family. "Every Sunday."

But it's not out of obligation. Church gives her a sense of peace. "When I come here it's like a time when I can stay with myself and talk to God," she says. "I tell him I'm sorry if I did something wrong and it makes me feel better."

Quotes of Christian scripture are painted in flowing Arabic on the walls. Candles flicker in front of alters on either side of the altar.

The cathedral has just been renovated. Lea is proud of the newly painted murals on the walls. She says the church is a calm and comforting place.

Above Lea are striking new portraits of the apostles painted in classic Greek Orthodox style. Gold halos surround the saints' faces. But in a sign of the ongoing tension here, the icons are painted on special paper that can be peeled off, rolled up and spirited to safety if the church is attacked. This isn't just paranoia; many churches were desecrated during Lebanon's civil war. 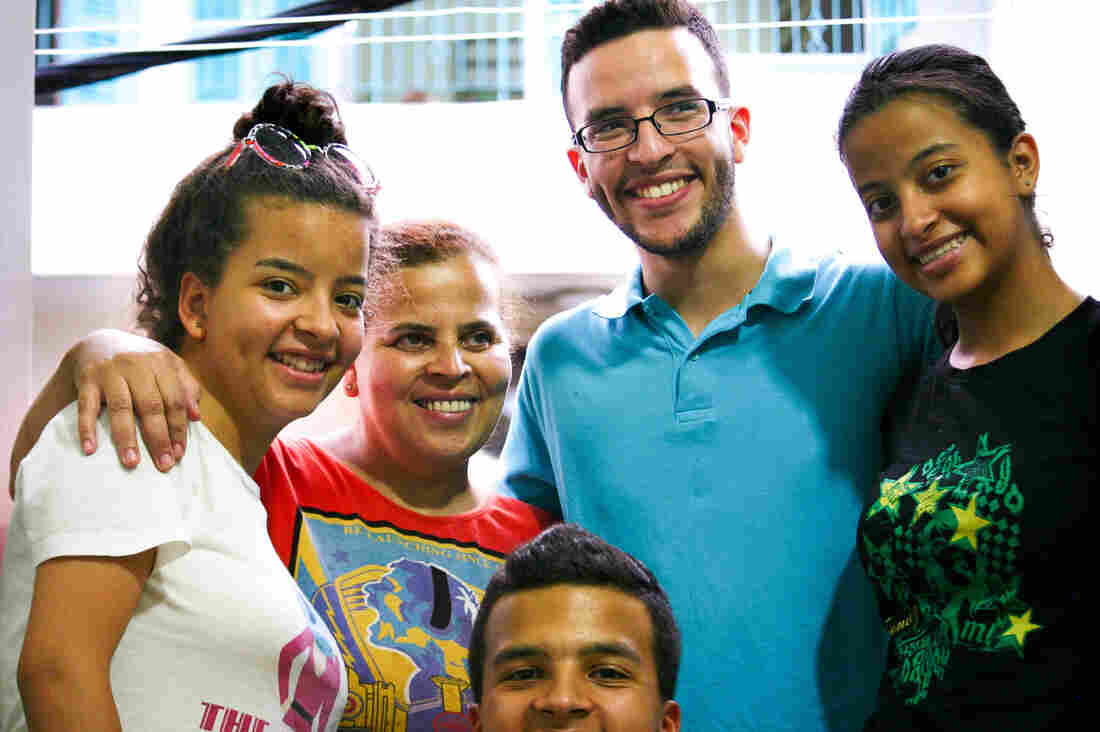 Lea Hatouni, right, with her mom, Eni, in red. Lea shares a room with her brothers, Kenny, in blue, and Jad, and her sister Marina, left. Jason Beaubien/NPR hide caption

That conflict turned Beirut in the 1980s into one of the most dangerous places on earth. It was what Baghdad was a decade ago and Aleppo is today.

In a way Lea Hatouni is a product of Lebanon's civil war. Her father, Michel, fled the fighting and ended up in Brazil, where he met Lea's mom, Eni.

Eni and Michel still joke about who pursued whom.

Lea inherited her mother's dark skin and jet black hair. She also picked up Portuguese from her mom.

In Beirut it's quite common for students to speak English and French in addition to Arabic. All of this nurtured Lea's love for languages and hopes of becoming a globetrotting translator after college.

Her mom doesn't want her daughter going abroad until she's much older, maybe in her late 20s.

Lea smiles in a non-committal way as her mother says this.

Later, away from her mom and walking through a small park, she talks confidently about becoming a translator. In her mind her career is playing out like a movie that's set outside of Lebanon.

"I think if I go outside Lebanon it's better. I'll have a better job," she says.

So even though Lebanon is currently at peace and even though her world now swirls around a few blocks in the Christian section of Beirut, Lea expects that eventually she'll have to leave. Leave as her father did in order to fulfill her dreams.