Accessibility links
Meet The Biracial African Comedian Who Is Not Trevor Noah : Goats and Soda Comic Ikenna Azuike brings wigs, false teeth and barbs about Africa to the BBC. Now his show, What's Up Africa, is up for a broadcasting award.

Meet The Biracial African Comedian Who Is Not Trevor Noah

Meet The Biracial African Comedian Who Is Not Trevor Noah

On a recent episode of What's Up Africa, comedian Ikenna Azuike is pointing out a statement by Tunisian transportation minister Mahmoud Romdhane that wearing a hijab reduces hearing by 30 percent and is therefore dangerous.

The camera cuts to Azuike, eyes closed, looking peaceful and wearing a white hijab — a noise-canceling hijab, which he jokingly calls "Beats By Romdhane."

The camera then cuts to a Ugandan music video being filmed in a massive soccer stadium with no one in the seats. The song is supporting the re-election of President Yoweri Museveni, a controversial leader who has been in power nearly 30 years.

"Because nothing says your people love you more than a music video filmed in ... an empty stadium," Azuike jokes.

What's Up Africa is a satirical comedy show focused on African news, culture and politics. It started on YouTube in 2011 and was picked up by the BBC this year. Each episode is short — anywhere from 90 seconds to a few minutes — but packs a punch. The series has been shortlisted for an Association for International Broadcasting award (winners to be announced Nov. 4), and Azuike was named one of the "100 Most Influential Africans" of 2014 by New African magazine. 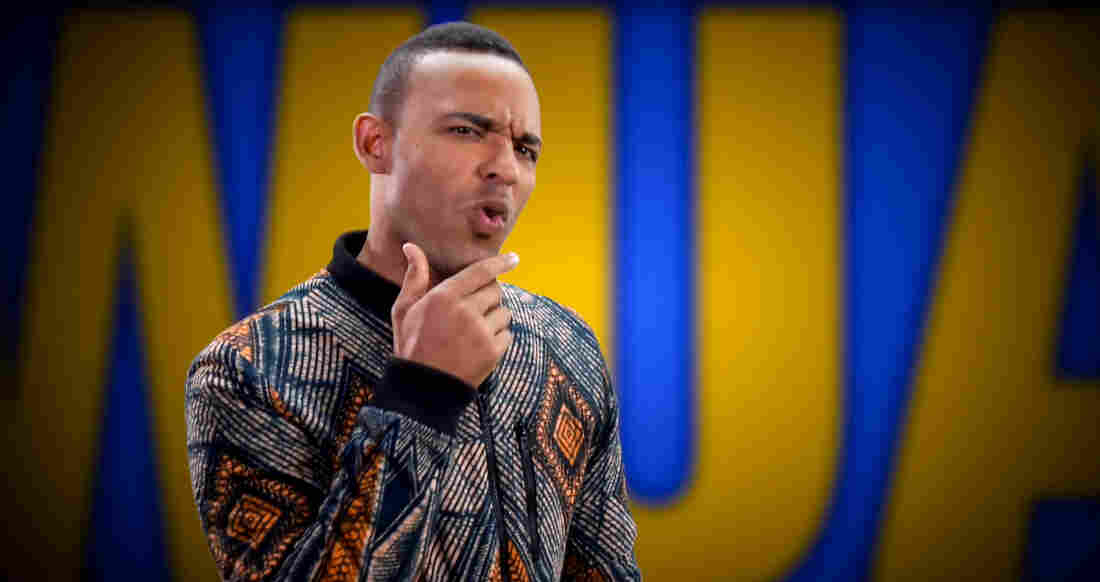 In one skit, Ikenna Azuike pokes fun at political dynasties by impersonating a president whose nominees for minister of justice start with "my wife, obviously" and end with "my Chihuahua — she is technically dead ... but she is still family." YouTube hide caption 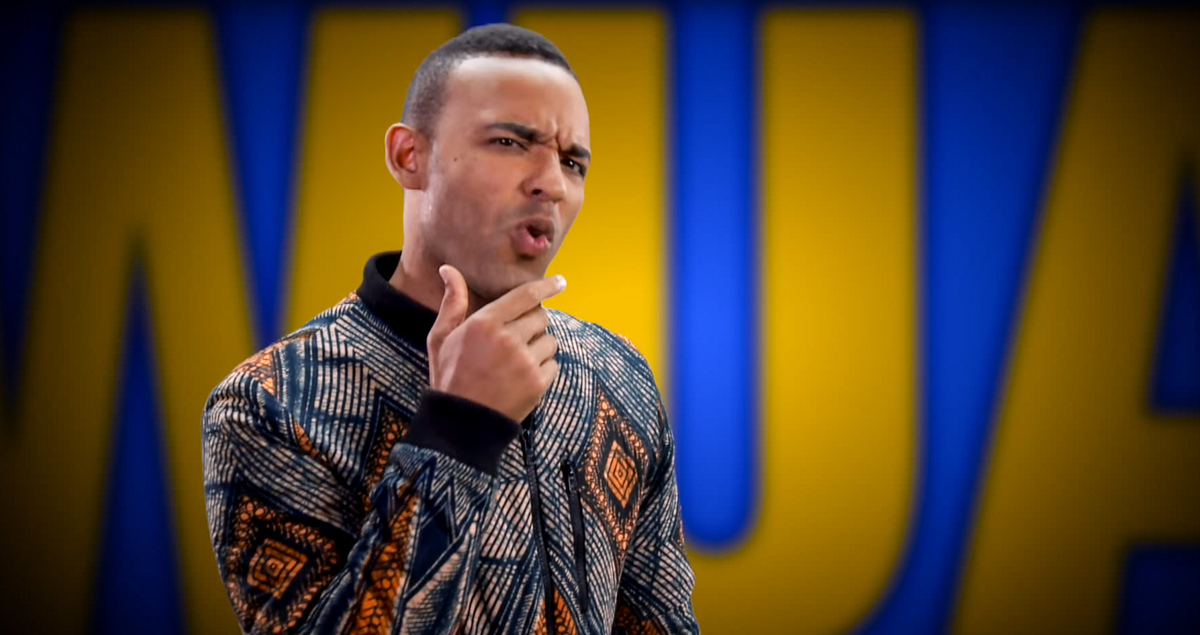 In one skit, Ikenna Azuike pokes fun at political dynasties by impersonating a president whose nominees for minister of justice start with "my wife, obviously" and end with "my Chihuahua — she is technically dead ... but she is still family."

Azuike was born in Nigeria to a Nigerian father and German-Ukrainian mother. His family moved to the UK when he was 8; he currently lives in the Netherlands, where the show is produced by Radio Netherlands Worldwide. I chatted with him about his work, Africa and what it's like to do comedy about a continent with seemingly so much to satirize.

How did What's Up Africa come about?

I started the show because coverage of my home continent was either too focused on presenting images of war, famine and general disorder or, on the other hand, providing over-the-top, saccharine reports of Africa's progress. Plus, none of the media was speaking effectively to the digital generation of young Africans.

I'd always been inspired by Jon Stewart and what The Daily Show achieved, and the idea that if you make people laugh, you can make them listen — and you can have an impact. I was also plugged into YouTube culture, especially shows like Equals Three. I realized there was no one doing this kind of comedy in the African news space, and I thought it was something that could work. And I realized it was a way for me to dress up and wear wigs and false teeth and boobs. So I thought, let's do this!

You started your career as a lawyer ... and now you're hosting a satirical news show about Africa?

I decided to pursue law after college because of my dad's influence on me — but I guess I can't give him all the blame. I was 18 and there wasn't anything else that I really had a passion for, so I ended up on this conveyor belt to study law. Then I spent 4 1/2 years with [New York-based law firm] Shearman & Sterling, but I was brutally unhappy. I decided I wanted to do something more fulfilling and creative, and so in 2008 I started at [Dutch media company] RNW.

Yeah, going there was, like, an 80 percent pay cut, and I started right at the bottom. I was a trainee. But I decided that it was better to be at the bottom of a ladder you want to climb than halfway up one you don't. So I said, let me soak up everything I could about how to edit, how to tell journalistic stories. And I started working on a show called Bridges With Africa, a news magazine about African politics and culture. And a year and a half into that, I got the idea for What's Up Africa.

How do Africans respond when you put on a wig or fake teeth and ask outrageous questions or involve them in funny sketches?

People are so refreshingly surprised. Sometimes they're like, wait, this is the BBC? I'm sorry, what's going on here? But the fact that it is the BBC and it's so unconventional, everyone just goes for it. Everyone is open for a laugh. The key thing is to make it clear that we're talking about something very serious, and that I'm trying to address something serious through comedy, and of course everyone understands that.

So no moments where things have gone south fast?

Until now, no. I did this piece in Lagos where I was a pastor and I'm waving a Bible and ringing a bell like pastors on the continent sometimes do, and I thought, well, how are people going to take to this? People there are very spiritual, and I'm shouting "Amen!" and "Praise the Lord!" But no one got upset.

I'm sure it's going to happen at some point. I did this interview with Femi Oke, an Al-Jazeera news presenter, and I was screaming in her ear and ended up dribbling [getting spit] on her. She still found that a laugh. But at some point, somebody's gonna say no to dribble, you know?

Did you worry that the show wouldn't succeed?

For sure, but not because of whether or not people would appreciate satire, but because of me. I was concerned if people would see me as an authentic commentator on African news. I've got a very British accent and to look at me you'd place me in a different box. Then when you hear my story, that I'm based now in Amsterdam, you'd put me in yet another box.

But I care about the issues, and I think people see that I have the passion, and I think that's why they cut me some slack. As the show has progressed, I'm connecting more with young Africans who live outside the continent, and I've been traveling around [Africa] quite a lot, so now I feel a lot more comfortable in my skin. I still worry whether or not I'm welcomed as a commentator on Africa. But there have been enough moments when I feel reminded that it's OK.

It seems like there's a lot of satire-worthy material in Africa. How do you choose your stories?

I choose stories that make me the most frustrated and angry. That's a big driver for me — anger. And at the beginning of the writing process I say, OK, what's the point I'm really trying to make here? It's easy to be funny and make silly gags and have cheap laughs. But to be witty and have sharp satire is way more difficult. So there's two sides to creating every episode — the more cerebral one, where I'm saying what's the fresh angle on this topic, what am I trying to say? And then there's the more creative part that's like, OK, let's just go have fun.

I also try to balance each episode at the end with something more celebratory about the continent. I don't want it to be just doom and disaster. That's not what I set out to do.

Maybe Trevor Noah Shouldn't Be So Comfortable With An Indoor Toilet Sept. 29, 2015

You're a longtime fan of The Daily Show. I imagine you've been following Trevor Noah closely.

Big time, yeah. He's blazing such a trail. The fact that he's there, regardless of what people think about his performance, is just amazing. It's so, so special. And I feel privileged that it's happening in my generation as well. It's creating opportunities for so many people. There are now Ugandan writers on The Daily Show, South African writers on the show.

Whether or not [Noah] can use that platform to educate North Americans more about Africa or educate them more about African news, I don't know. He hasn't really been able to do that yet. It's a show about American politics. But hopefully it opens the door for a satirical TV news show focused on Africa — which might be something that someone like me could present!