Accessibility links
NPR Rescued A Chicken That Tried To Cross The Road... : Goats and Soda And that led us to interview a chicken expert who shared some exciting news about chickens in the developing world.

NPR Rescued A Chicken That Tried To Cross The Road...

NPR Rescued A Chicken That Tried To Cross The Road... 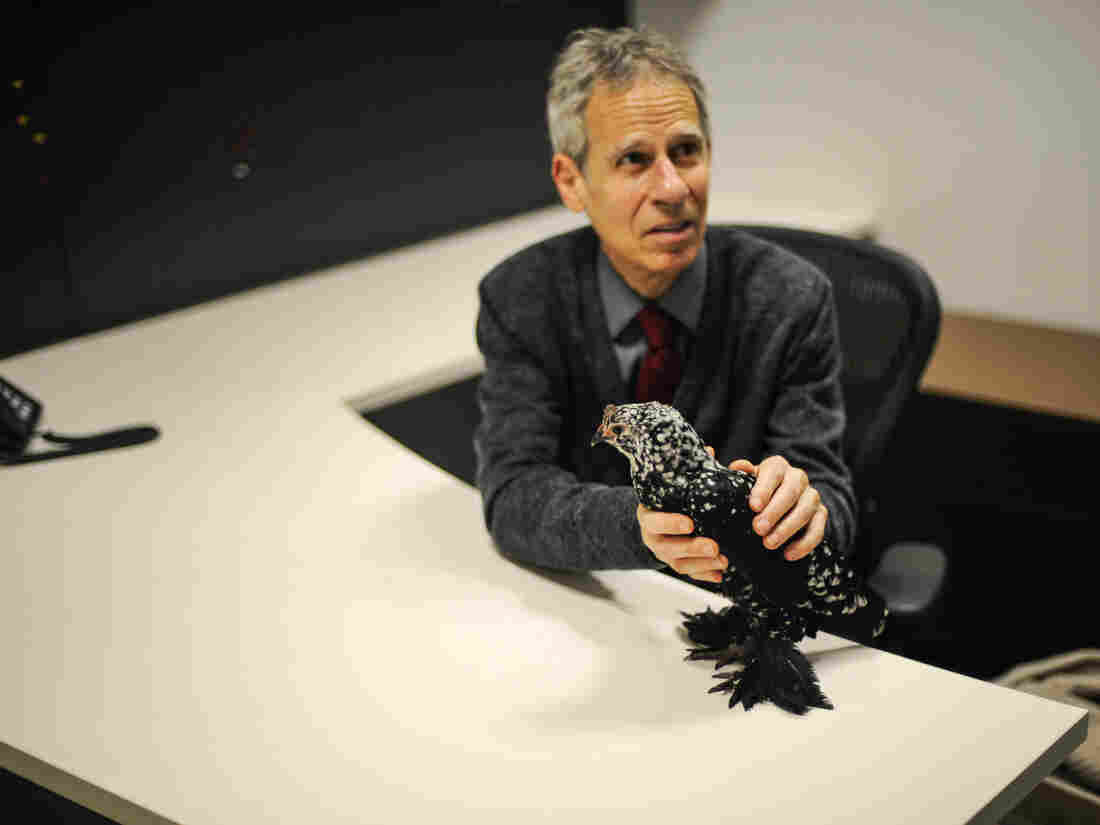 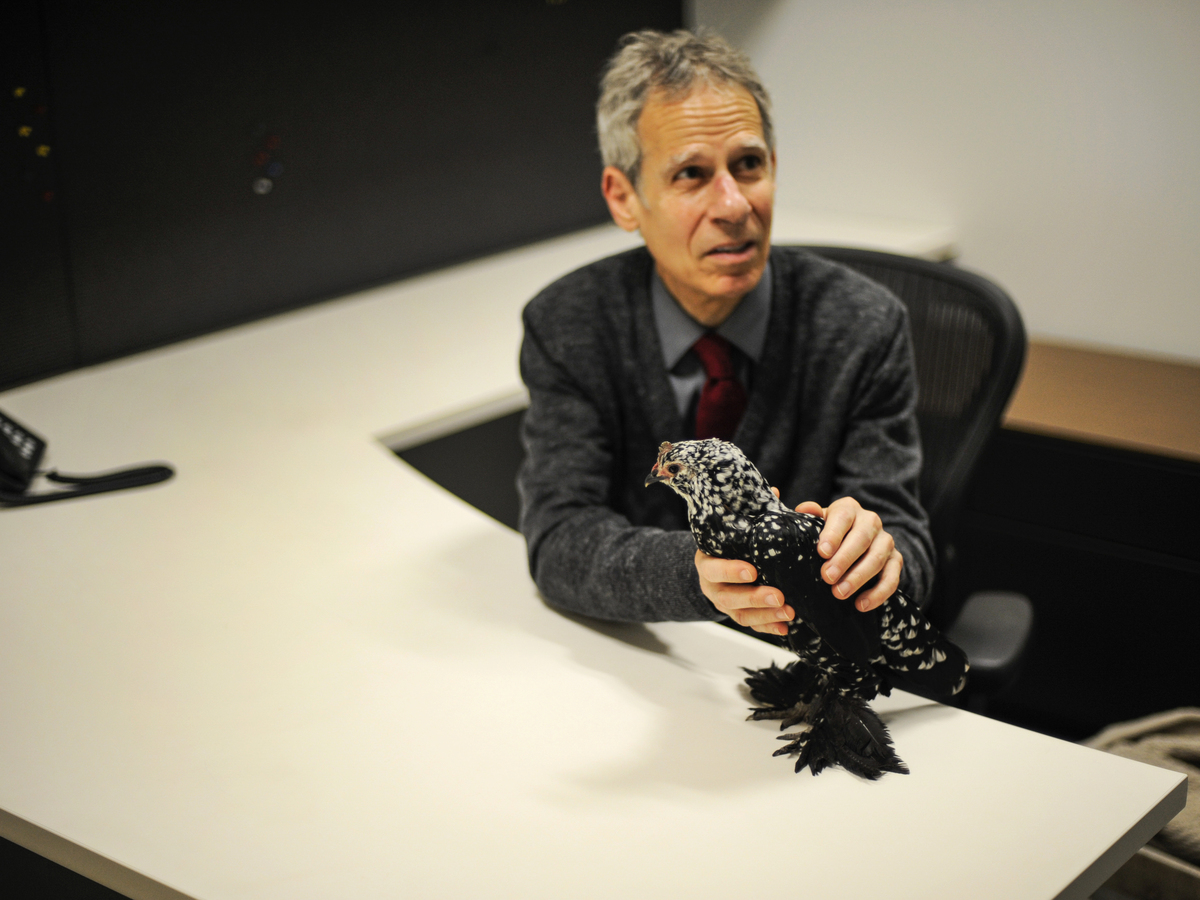 Goats and Soda Editor Marc Silver tried to interview the rescued hen, but she wouldn't make a peep.

In Washington, D.C., today, NPR staffers rescued a beautiful, black-and-white hen that was darting about busy North Capitol Street by our headquarters.

This demure urban chicken, who hung out in an NPR office in a mail crate with a bowl of water and granola bits, made us wonder about the lives of chickens in the low-income countries that our blog covers. To keep abreast, we turned to Jagdev Sharma, a research professor at Arizona State University who is well acquainted with the habits of chickens. He runs the Kuroiler Chicken Project in Uganda, which provides farmers with a breed of chicken that matures quickly and lays lots of eggs.

I'm calling because I was inspired by a chicken we found running on the streets today.

That is quite interesting that a stray chicken would be found in Washington, D.C.

I guess that kind of thing happens in lots of villages and even cities in the developing world.

It would not be a surprise.

How important are backyard chickens in the developing world?

Backyard chickens are a very, very important part of village life in most countries, including here in the United States, but they are especially important in developing countries — in [many parts of] Africa, India and in other places.

And you have special knowledge of the chicken situation in Africa?

I can speak to you about Uganda, where our project is focused. Uganda has a population of about 38 million people. The number of chickens produced is roughly equivalent to the number of people who live there: 40 million chickens every year. Eighty-six percent of those birds are produced in villages by farmers with family flocks — birds [that] run around in the backyard and are scavengers.

Chicken is important not only as a protein source but also in rituals and celebrations. When a son-in-law comes to visit, it's customary for the family to feed him chicken and also when he leaves to give him a live chicken to take back.

How dangerous is life for these village chickens?

We were visiting a farm in Uganda, and there were six chickens running around. Right in front of our eyes, a kite, another bird from the sky, flew in, grabbed one of these chickens and flew back out. Instead of six chickens we have five. And this is common.

Were the chicken's owners upset or is this just the way it goes?

They were very upset, swearing up and down at the bird. But what can you do? They build some wire structures around the chickens but by and large [farmers are] not really able to practically protect the chickens. The hope is that the chickens are strong enough to run away from these predators. Predators are a problem but not a problem to the point where they're going to make birds extinct.

You got a grant from the Gates foundation [which is also a funder of NPR] to change the kind of chickens that farmers raise in Uganda.

Most people in Uganda, especially village people, like the tough meat of a bird that grows by itself as a scavenger. They don't like the softness of the broiler that we like in America. But a scavenger chicken grows slowly. It takes eight to 12 months to reach 2.5 kilos [about 5.5 pounds]. The Kuroiler chicken reaches that weight in half the time. It's the genetics of the chicken. It's a voracious eater. It just eats all day. And the typical bird in Uganda produces about 40 eggs a year and sits on these eggs and hatches them. The Kuroiler bird does not do that. It doesn't brood. So it keeps laying eggs year-round: 150 to 200 eggs.

That's good news for a farmer! What is the origin of this bird?

It was developed in India by a private company and has been in use in India for over 15 years. I believe over 1 million families are raising this bird in various parts of the country.

What does the name "Kuroiler" mean?

I can't answer that question. It's a company name.

Any disadvantages to the Kuroiler?

Only the first generation is good. The hens produce up to 200 eggs for a year and the male is usually ready to sell by three to five months. [The next generations] are not as productive. Farmers should not try to breed the chickens.

Where do the new generations come from?

The company produces each batch of parents from grandparents that are produced by crossbreeding and by selection from pure genetic lines of chickens.

How many Kuroilers has your project distributed in Uganda?

Thus far we have probably distributed maybe a million and a half. Right now we are producing 30,000 to 40,000 birds per week in Uganda.

How much to buy a Kuroiler chick?

The company we are working with sells day-old chickens at 1,800 shillings. There are about 3,500 shillings to a dollar.

It sounds as if this bird could really transform the chicken business in Uganda.

The potential is enormous. It looks the same as the local chickens, grows faster and the farmers we surveyed say the taste is similar or better in their view.

To get back to the matter of wandering chickens, which started our conversation — do chickens run away from "home" in Uganda?

As for our D.C. chicken, if we had left her on the road, she would probably have been roadkill. But a staff person who raises chickens is taking her home.

What should we name our chicken? Join the NPR Goats and Soda Twitter conversation here.