Accessibility links
A Cooler Uses Spacecraft Insulation To Keep Vaccines On The "Cold Chain" In Hot Spots : Goats and Soda Typically, if a vaccine is not kept cold, it doesn't work. And that's a big problem in hot spots. A new cooler seems to do the trick — without electricity!

How Do You Keep Vaccines Cool? Try Spacecraft Insulation

How Do You Keep Vaccines Cool? Try Spacecraft Insulation 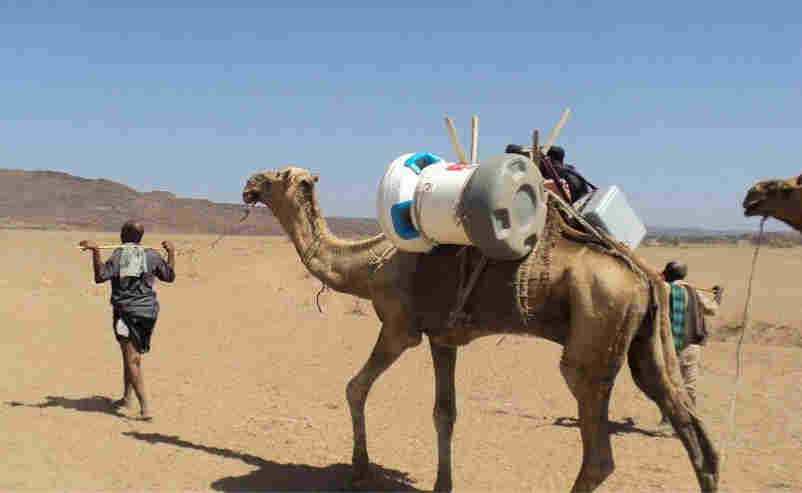 A camel gives a lift to the Arktek cooler, designed to give vaccines the cold comfort they need to remain effective. Courtesy of Gates Foundation hide caption 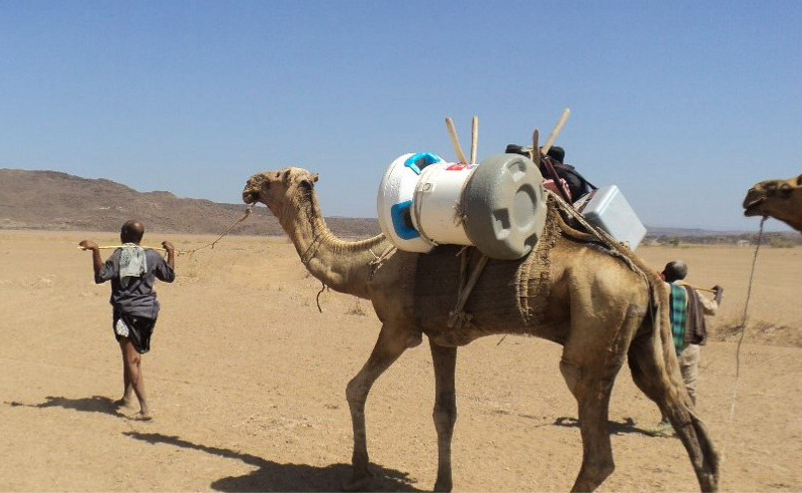 A camel gives a lift to the Arktek cooler, designed to give vaccines the cold comfort they need to remain effective.

If you've ever been vaccinated, you may have seen the nurse head out of the room to go to the refrigerator to retrieve your injection. That's because most vaccines must be refrigerated during travel and storage or they lose their effectiveness.

Vaccines typically need what's known as a "cold chain." From the point of manufacture to the place where they're used, they need to be kept within a narrow temperature range, typically between 35 and 46 degrees Fahrenheit.

When a vaccine heads out into regions where the power supply is spotty at best, that "cold chain" can be hard to achieve. From places deep in the Himalayas of Nepal to remote villages in Benin, the refrigeration services needed to store vaccines cannot be maintained.

Experts say the absence of a cold chain in poor and remote locations is a major cause of lack of vaccinations. Worldwide, 1 in 5 children is not fully protected by even the most basic vaccines, such as measles and tetanus. As a result, WHO estimates that 1.5 million children die every year from vaccine-preventable diseases such as whooping cough and pneumonia.

Here's one possible solution. The Arktek cooler, devised by Global Good — a collaborative effort between Bill Gates and Intellectual Ventures — is capable of maintaining the necessary temperatures to sustain vaccines. This means it can hold temperatures between 32 and 50 degrees Fahrenheit for a minimum of 35 days in a hot zone environment (about 109 degrees Fahrenheit during the day) with only ice inside the storage space. (Note: The Gates Foundation is a funder of NPR.)

Electricity is not needed to cool the device. The container uses vacuum thermal insulation technology that has, in the past, been used to protect spacecraft from temperature extremes.

"Now more children in remote villages can be immunized because they can count on the Arktek to deliver vaccines at the proper temperature," said Dr. Zihong Guo, director of partnerships at Global Good. "The device is easy to use and does not need much maintenance. Therefore, the ongoing operating cost for the Arktek is low compared to most existing technologies."

The cooler, designed and manufactured by the Chinese refrigeration system supplier Aucma, is a 1 3/4 foot by 2 1/2 foot cylinder that can hold a little more than 180 ounces.

The cooler has been put to the test in the field, looking at its durability and how long it can keep cold. The tests were carried out in collaboration with PATH in Senegal and UNICEF in Ethiopia in 2013. Vaccines for tuberculosis and polio — and the pentavalent vaccine, which is five vaccines in one aimed at protecting children from influenza type B, whooping cough, tetanus, hepatitis B and diphtheria — were stored in the cooler. The cooler met WHO requirements and got positive reviews for ease of use.

A modified version of the Arktek was also used in Merck's Ebola vaccine trials in Sierra Leone and Guinea in late 2014. They were able to keep the vaccines at temperatures between -76 to -112 degrees Fahrenheit — the vaccine's required storage level — for up to three days in climates of up to 109 degrees Fahrenheit).

Since then, the coolers have been used in Nigeria and post-quake Nepal — and more are on their way to India and Ethiopia.

They're Calling This Vaccine A 'Stunning Success'

"I must say that the innovation has never been so timely, and the need to address issues of 'cold chain' in keeping a vaccine in an effective state in Africa [is what we've] been really wanting," said professor Collins Ouma, head of health challenges and systems at the African Population and Health Research Center. "This innovation will be critical, as life-saving vaccines will now be available for children who live in remote areas and who really need them."

Other possible options are being investigated as well, including developing vaccines that don't require constant refrigeration from manufacture to distribution. In February 2014, a study in the journal Vaccines demonstrated a step forward in delivering a meningitis vaccine to Benin that was effective despite not being kept cold for periods of time.