Accessibility links
Pope Francis's Trip To Africa Raises The Question: Can A Papal Visit Improve A Poor Country? : Goats and Soda During a papal visit, the media swarm and security is intense. He speaks of issues that face the country. After he goes, is there any lasting legacy?

A Pope's Visit May Bring Hope, But Does It Also Bring Change?

A Pope's Visit May Bring Hope, But Does It Also Bring Change? 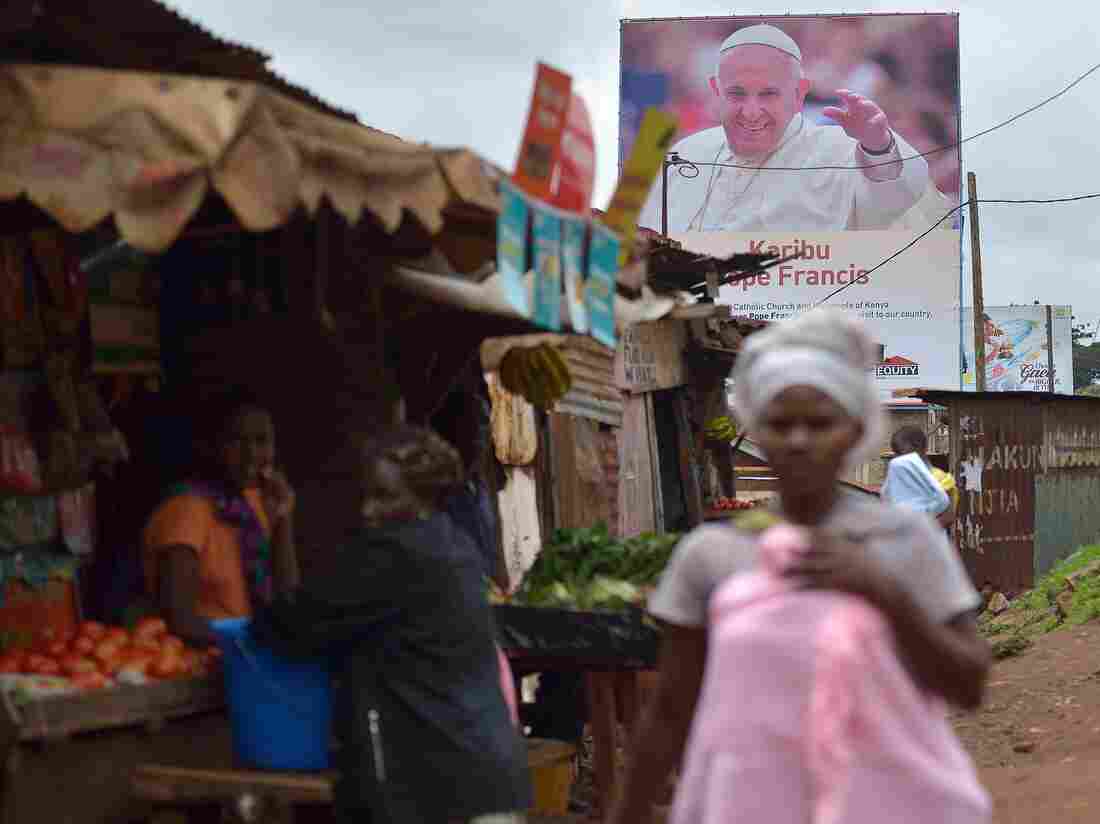 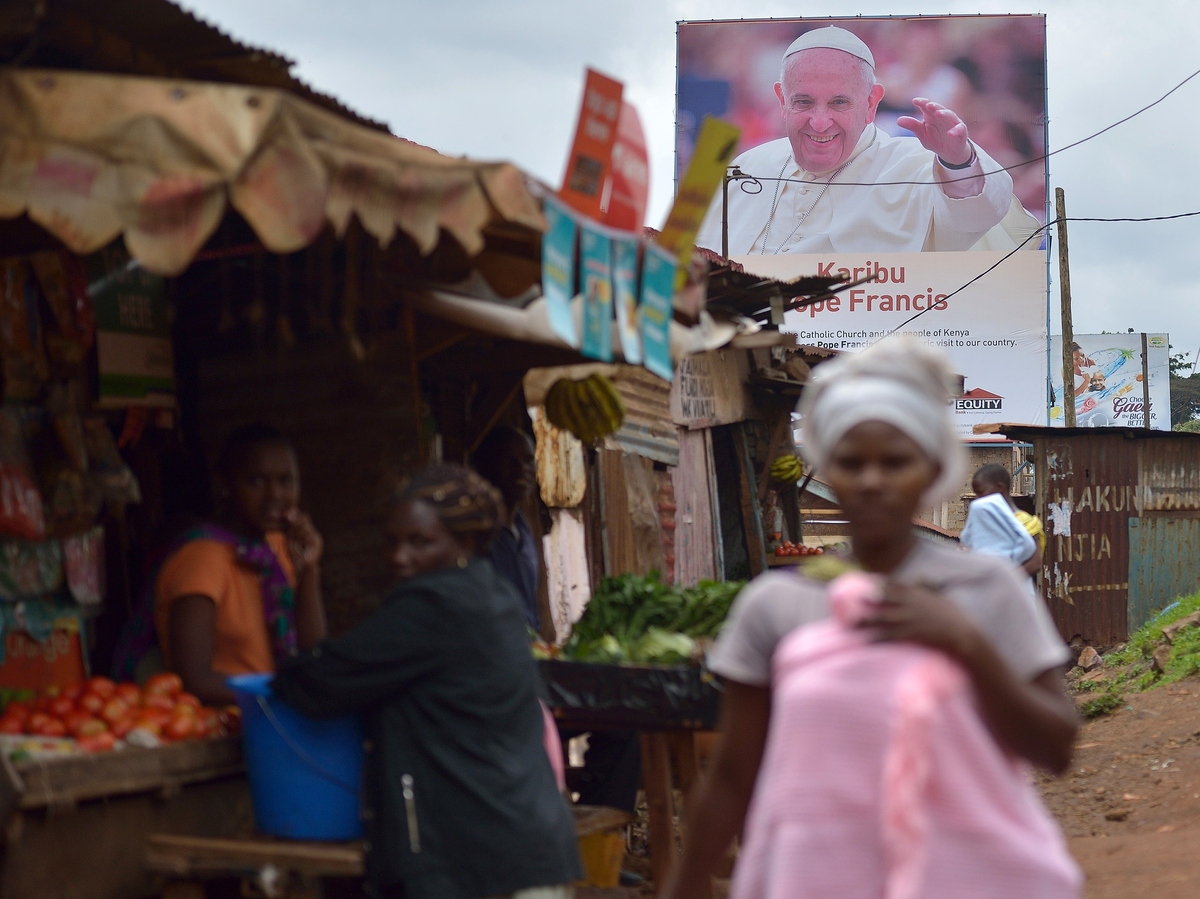 A poster in the Nairobi slum of Kangemi welcomes Pope Francis to Kenya.

Pope Francis is often seen as a champion of the downtrodden. He frequently speaks about poverty and the injustice of inequality.

During his upcoming visit to Africa — from Nov. 25 to 30 — he'll visit three countries with high rates of poverty and rapidly growing economies: Kenya, Uganda and the Central African Republic.

His presence is certain to attract a lot of attention. But will his visit benefit poor people in these countries? What kind of difference, if any, can a visit from the pope make?

To find out, we spoke with Dr. David Toole, a professor of divinity, ethics and global health at Duke University. He writes frequently on the intersection of religion, health and development in sub-Saharan Africa.

What do you make of the Pope's decision to visit these three countries?

The choice to visit the Central African Republic is especially interesting. If I were to pick one place in Africa that's the most off the map, the most remote and that has the most extreme circumstances and challenges, it would be the CAR.

It seems like it sends the message that this Pope really cares about the poor. It's like, let me go to the place where the world is not even looking and help put it on the map. And that fits with the message he's been delivering since [he assumed the papacy]. Early on, he basically said, let's stop talking so much about abortion — not that it's not important, but it's maybe not the thing pastors should be preaching about every Sunday. There are other issues, like poverty.

So do you expect him to focus on poverty on this trip?

I wouldn't be surprised if he talks about poverty and climate change. I've been going to East Africa regularly for the past seven years and really see the impact of climate change on subsistence farmers. They rely heavily on the seasons, the wet and dry seasons, to produce crops. I often ask farmers about the seasons and I'm always told, it used to be that the rains would come at the same time each year, but now we don't know anymore.

And of course, earlier this year the Pope released an encyclical about climate change. So I wouldn't be surprised if he emphasizes that issue on this trip.

Do you think a visit from the pope can make a meaningful difference in the lives of poor people? If so, how?

We were just discussing a very similar question at a panel at Duke, whether or not encyclicals from the pope actually make a difference. The consensus was that they can make an impact in the short term, in terms of attention and dialogue. But does it make a difference in the long run? It's almost impossible to know. I'm not sure how you could ever measure that.

But there are some examples of changes happening in countries during and after a papal visit. The best known is probably Pope John Paul II's visit to Poland in 1979. Here was a Polish pope going to Poland to much fanfare. The government was still communist at the time. Trade unions were beginning to form, and they began wreaking all kinds of havoc in the country. The government opposed the pope's visit and had backing from the USSR. Eventually the pope engaged with [Soviet Union leader Leonid] Brezhnev directly. [John Paul reportedly sent a letter to Brezhnev, expressing concern about potential USSR military action in Poland.]

In the long run, the unions won out and communism fell. Some people have credited Pope John Paul II with inspiring the people in Poland to do what they did. That might be a bit of a stretch. But did he make an impact? You could make the case that he did.

So maybe his visit led to economic benefits in the long run. Any other historical examples come to mind?

The other one is John Paul II again, this time visiting El Salvador. Oscar Romero had been made Archbishop of San Salvador in the late 1970s, and many people were hoping that he would become a balancing force in a country that seemed poised to explode. The story goes that Romero read the Bible and decided he needed to side with the poor, and he was accused by the right of inciting the poor to violence. [Romero was assassinated in 1980.] The pope later visited Oscar Romero's tomb in 1983 and became very outspoken about what Romero stood for, about standing up for the rights of the poor and bringing an end to the civil war. And the pope was speaking against the existing government that was all Catholic. It's hard to say if his visit had a direct impact on poor people, but it certainly put the country and [issues of] poverty in the international spotlight.

Any other thoughts on how a visit from the pope can benefit poor people?

I guess the other question is what's happening behind the scenes. Like when Pope Francis went to Cuba and then straight to the U.S. [earlier this year], at a time when we're melting our cold relationship with Cuba. I wonder how intentional that was, how much pre-work was done on that visit, and how much Pope Francis was trying to court an Obama administration that was trying to change its relations with Cuba. You don't always know what's happening behind the scenes during a pope visit. And it's always tough to say what the long-term impact of these visits will be — especially on the people.