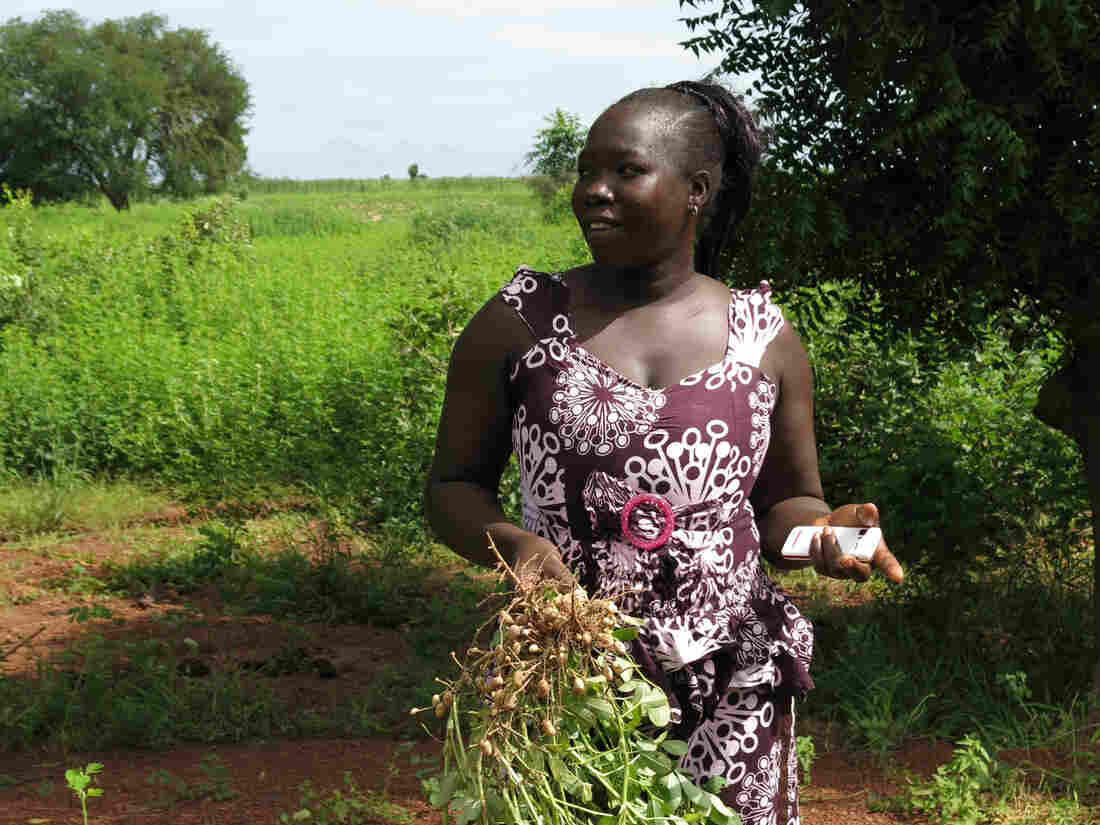 Mariama Keita, a farmer in Senegal, uses her cellphone to figure out the best time to harvest her peanut plants. Ofeibea Quist-Arcton/NPR hide caption 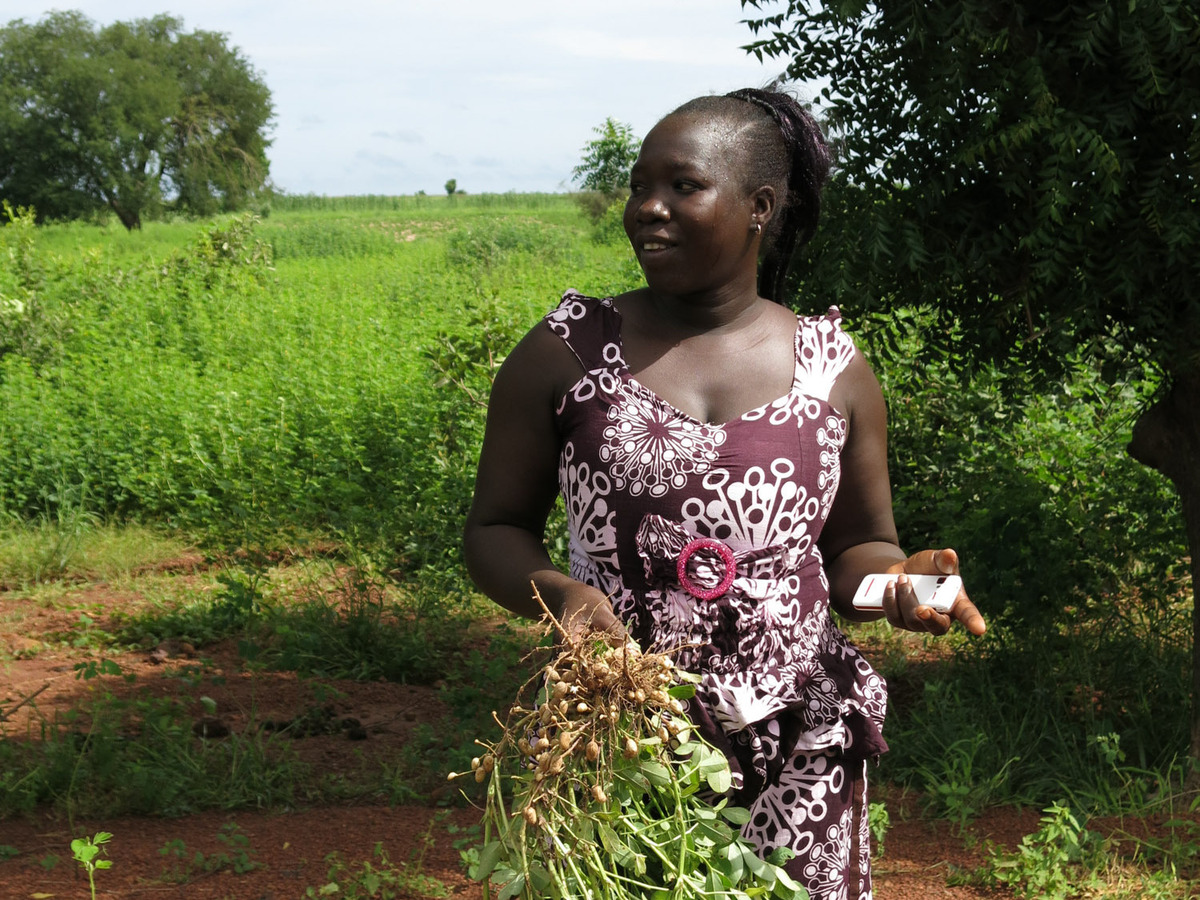 Mariama Keita, a farmer in Senegal, uses her cellphone to figure out the best time to harvest her peanut plants.

She doesn't have a tractor or any mechanized tools.

But the mother of two does have one new weapon in her agricultural arsenal to help keep her farm running: her cellphone.

For the last eight years, Keita has been farming the 10 acres she inherited from her father. The property is in Kaffrine in central Senegal — the country's peanut-growing region.

An area that's brown and sandy during the dry season is lush and green during the rainy season, ahead of the harvest. Birds chirp loudly in a bright blue sky, as a herder minds sleek, white-horned cattle. Horse-drawn carts transport passengers and crops along the road nearby.

The crop is looking good. Keita tugs at the root of peanut plants — known as groundnuts in West Africa — shaking off the soil to reveal healthy nuts beneath.

Senegal is in Africa's arid Sahel region, buffeted by the Sahara Desert. Agriculture here is highly dependent on rainfall. And that's where the cellphone comes in handy. 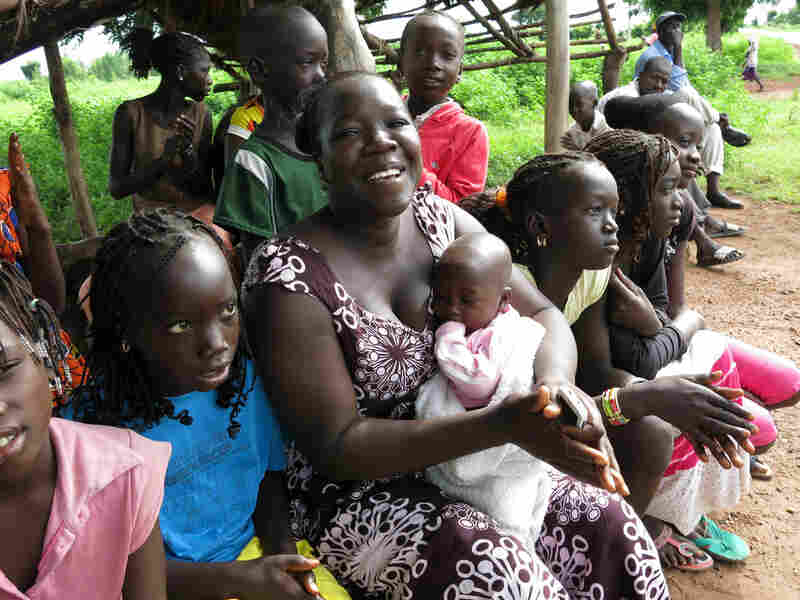 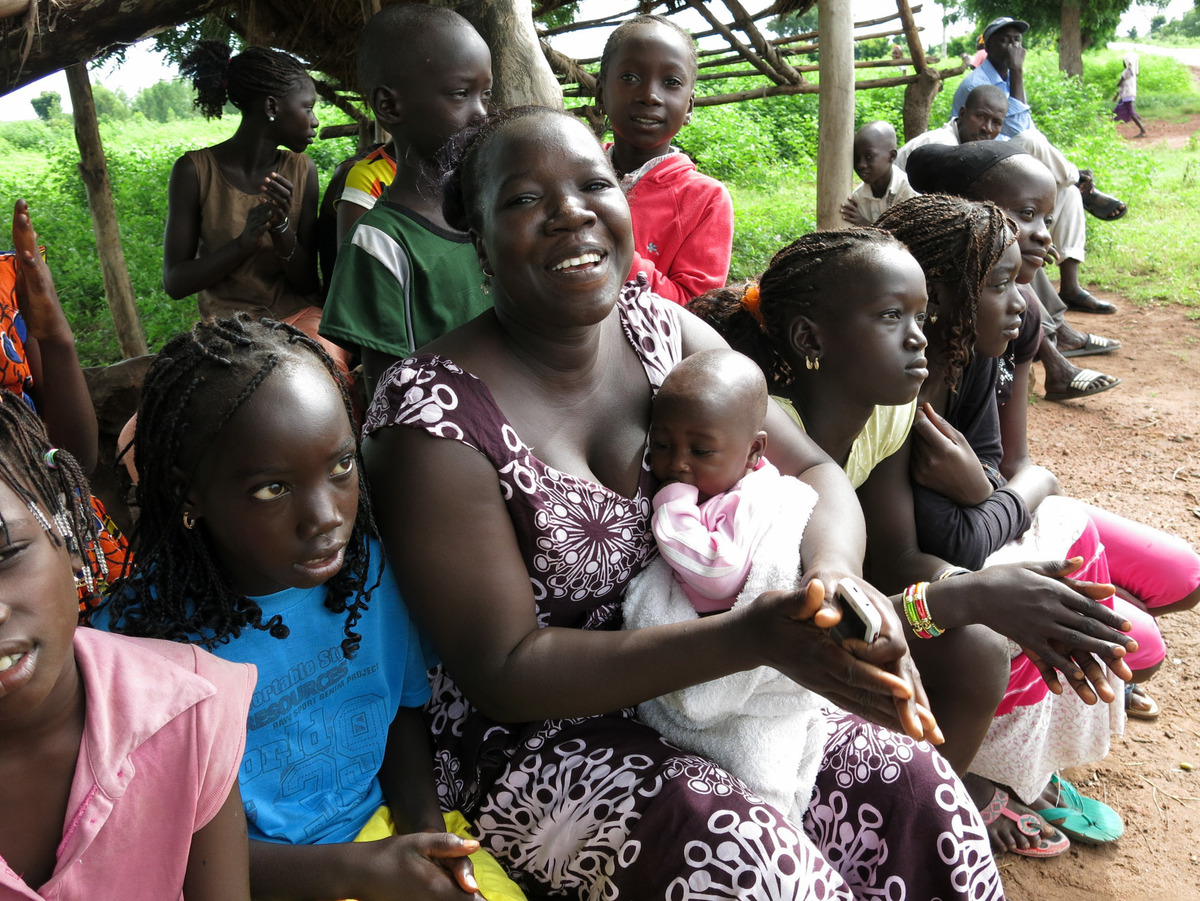 Keita uses her phone to check the latest climate information, sent by text by the national weather service (a service that's been available to American farmers for decades). Today, she's getting the current forecast — steady rain — as well as some information about farming conditions and warnings. Hold that harvest, the message says. Best to harvest mid-October.

The system is part of a research program on Climate Change, Agriculture and Food Security (CCAFS) in Senegal funded by CGIAR, a global consortium of agriculture research centers.

"In Senegal, climate variability is so huge," says Columbia University-trained Ousmane Ndiaye, from Senegal's National Meteorological Agency. "We try to make climate information available for farmers so that they can use it to make their work more climate-resilient."

Since 2011, Ndiaye has been working with farmers and villagers in Kaffrine, like Keita, who interpret the advisories and share the knowledge with their neighbors.

Ndiaye says they train selected farmers, including Keita, giving them a "heads-up" so that villagers can respond swiftly and protect crops like millet that have been stacked outdoors, to stop entire harvests being ruined by rain and humidity.

"And they react," says Ndiaye.

Come rain or shine, getting forecasts by cellphone doesn't work for all the farmers and villagers in Kaffrine. Those who can't read get the weather word via a community radio network in partnership with the weather service.

Keita prefers her cellphone. She says the text messages are handy and easier to pass on.

With seasonal forecasts and tips on farming conditions, she knows when the rains will come and can decide which short-cycle millet seeds to plant for early harvesting. If a text message says heavy rains are on the way, she won't apply fertilizer, which would wash away with the topsoil. The rains have been good this year.

At first, Keita was skeptical about the out-of-town miracle makers. She clung to old ways.

Then she noticed the benefits for farmers participating in the new research program. They were producing more crops in their test plots than in their other fields. They were using different fertilizers and seeds for their groundnuts and millet, and staggering the planting season — with bigger yields.

Keita was sold. Now, she says, she's producing enough to feed herself, her husband, their two children and extended family members. Clutching her cellphone and holding her 4-month-old baby girl, Ndeye, Keita proudly shows off a veranda they've added to their cement-block home in Sikilo village. Her earnings pay for school fees and medical bills.

Her husband, Moussa Sow — the local Koranic teacher — says life is now less of a challenge with his wife's financial support from farming.

So when Mariama Keita and other farmers gather to discuss the new techniques, and how to combine them with traditional farming methods, they often begin with a song of prayer: "Almighty God, please give us rain."