Accessibility links
The Kissing Bug Spreads Disease In Latin America. Is It Spreading To The U.S. As Well? : Goats and Soda A classic horror story was written about it. Some think Charles Darwin died from it. The oldest mummies in the world have traces. And this year, it's in the news — but not always in an accurate way. 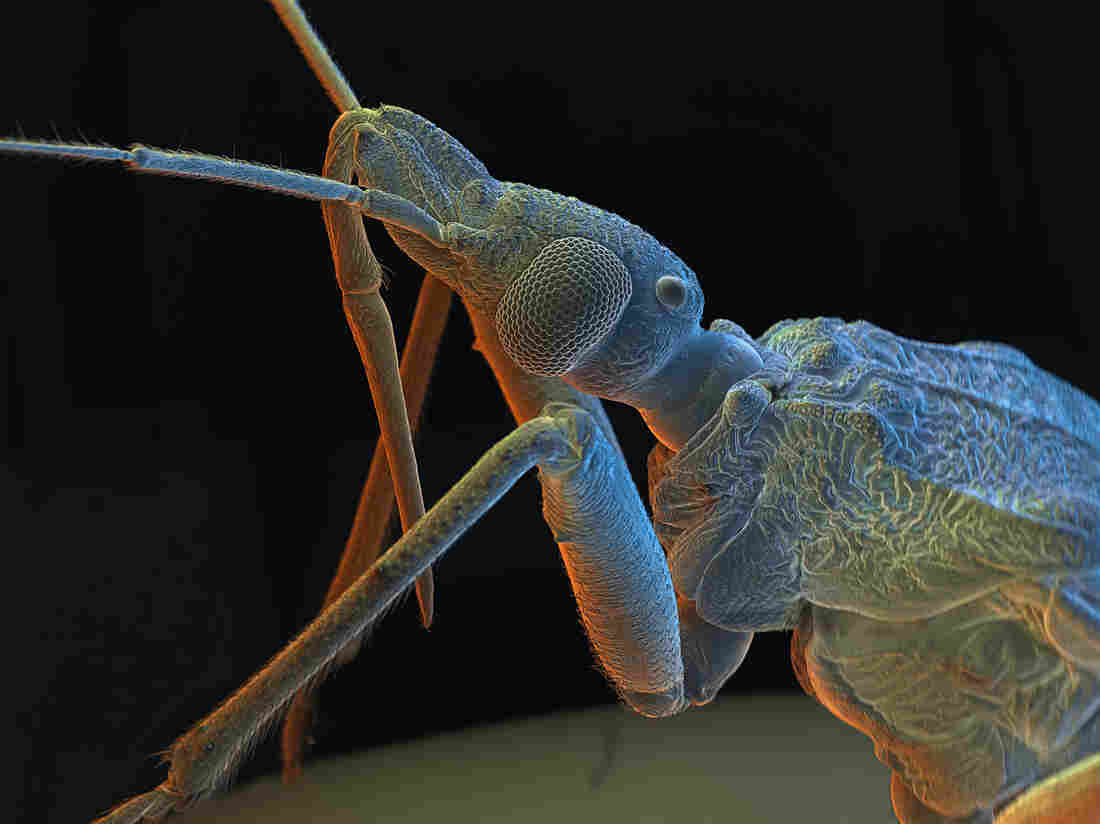 A kissing bug is ready for its scanning electron micrograph extreme close-up. This insect bites humans, sucks their blood and infects them with a parasite, transmitted through feces. David Scharf/Science Source hide caption 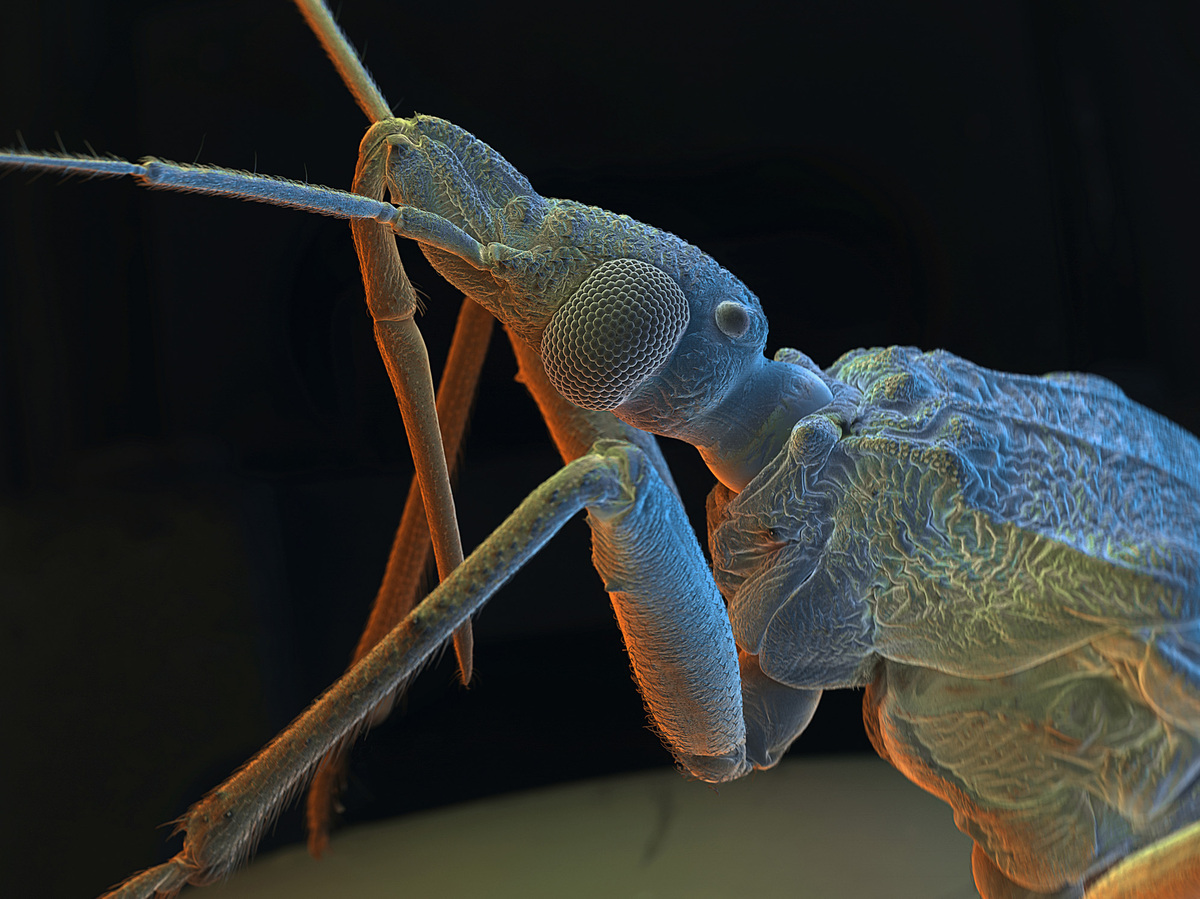 A kissing bug is ready for its scanning electron micrograph extreme close-up. This insect bites humans, sucks their blood and infects them with a parasite, transmitted through feces.

"El Almohadon De Pluma" (The Feather Pillow), written in 1905, is a classic of Latin American literature. Uruguayan author Horacio Quiroga tells the tale of Alicia, a newlywed who begins mysteriously and rapidly losing weight. Soon she's bedridden with severe anemia. The doctors are perplexed. She dies in no time. As the maid is cleaning out the bedroom, she calls the widower in: The pillow where Alicia used to rest her head has dark blood stains. She tries to lift the pillow up, but it's too heavy. So they cut it open.

"The servant shrieked with terror ... at the bottom of the pillowcase, among the feathers, slowly moving its hairy legs, was a monstrous animal, a living, viscous ball ... Night after night, ever since Alicia had taken to bed, it had applied its mouth ... to her temples, sucking her blood. The bitemark was scarcely perceptible." 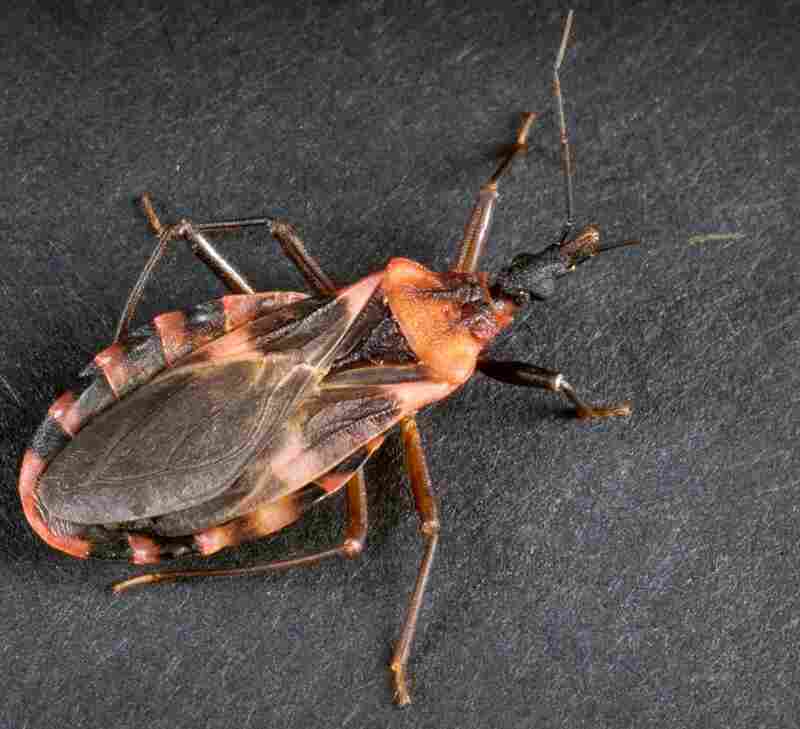 A kissing bug, often known in Latin America as vinchuca, spreads Chagas disease. You can have it and not even know it. Courtesy of the CDC hide caption

toggle caption
Courtesy of the CDC 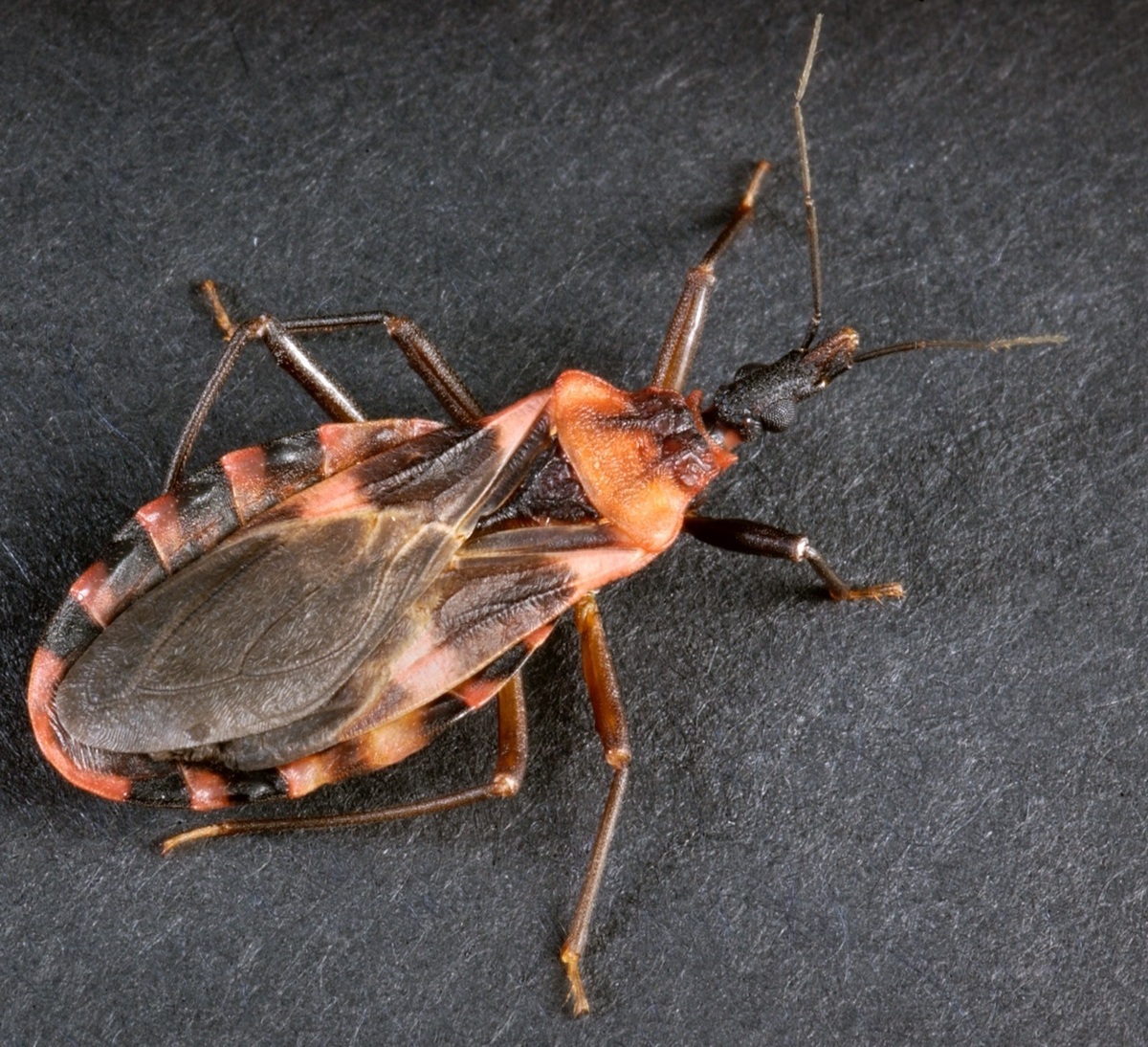 A kissing bug, often known in Latin America as vinchuca, spreads Chagas disease. You can have it and not even know it.

Courtesy of the CDC

Quiroga doesn't specify what kind of bug killed Alicia. But he spent much of his life living in and writing about the province of Chaco, and the lush jungle province of Misiones, in northern Argentina, which juts into Brazil. In both places, inhabitants have historically battled a bloodsucking insect called vinchuca. In Portuguese it's called barbeiro, or barber, because it typically bites the face. In Venezuela it's called chipo. Peruvians call it chirimacha. And in Central America, it goes by la chinche picuda.

Whatever you call it, it's caused a lot of commotion in Latin America. And this fall it's causing a mini-panic in the U.S., where it's known as the kissing bug.

In real life, the kissing bug does suck blood. But that's not the problem. The bug swells so much from feeding that it defecates, leaving the parasite Trypanosoma cruzi in the victim's bloodstream.

The result is Chagas, or kissing bug, disease. According to the World Health Organization between 6 million and 7 million people are infected, mostly in Latin America. There are two phases — acute and chronic. During the acute stage, parasites circulate in the blood. But fewer than half of patients display symptoms, which can include a purplish swelling of the lid of one eye, fever, headache, pallor, muscle pain, difficulty breathing, swelling and abdominal or chest pain. After about two months, the infection can turn asymptomatic.

But that's not the end of Chagas. About a third of those infected develop a chronic form of the disease. The parasites hang out in the heart and digestive muscles. Patients suffer from cardiac disorders and digestive and neurological problems. As the years go by, the destruction of the heart muscle and its nervous system can result in heart failure.

One good thing about Chagas is that it's not highly contagious. It's transmitted primarily through the bug bite or blood transfusions.

The disease gets its name from Brazilian doctor Carlos Chagas, who discovered it in 1909. But it's hardly a new disease. The oldest mummies in the world, the Chinchorro mummies in the Chilean desert that date back 9,000 years, have traces of it. Some believe Charles Darwin, who had heart problems, was infected. An ominous entry in his The Voyage of The Beagle reads, "At night I experienced an attack (for it deserves no less a name) of the Benchuca, a species of Reduvius, the great black bug of the Pampas. It is most disgusting to feel soft wingless insects, about an inch long, crawling over one's body. Before sucking they are quite thin but afterwards they become round and bloated with blood."

The first case of Chagas in the U.S. was reported in 1955. But the disease has been receiving a lot more media attention lately, with reports that its presence is growing in North Carolina, Texas and other Southern states.

The truth is, kissing bug and Chagas disease have always existed in the U.S. Whether it's actually increasing is hard to say: We only recently started screening for it.

Earlier this week the North Carolina Department of Health and Human Services confirmed the state has no new cases of Chagas. "There is at least one species of the kissing bug that has been known to be in North Carolina for many years, if not hundreds," said Carl Williams, state public health veterinarian. "So it is true they are in North Carolina, but they are certainly not a new discovery."

In Texas there was a similar response a few weeks ago. Paula Stigler-Granados is a public health professor at the University of Texas School of Public Health. "Recently, the Texas blood bank supply started screening for Chagas," she said. "We know that Chagas has been in Texas for a really long time; we just haven't been screening for it."

Over at the Centers For Disease Control and Prevention, Susan Montgomery says she's baffled by all the attention. She's the leader of the Epidemiology Team in the Parasitic Diseases Branch, and she wants to make it clear: Reports that the CDC was "warning" residents of Florida and other states about the disease are untrue. She also says any ideas about it being brought in by immigrants are historically wrong: "The first recorded case was in 1955, long before any migration."

So what is the state of Chagas in this country? There have been fewer than 30 documented cases of Americans acquiring Chagas in the U.S., says Montgomery. But the CDC estimates that more than 300,000 Americans have the disease. They probably contracted it in Latin America.

Kissing bugs like warm weather, so it's no surprise that over the years, sightings of the bug itself tend to be in the South. In fact, military scientists in Texas have been researching the disease. And climate change might give the bug a bigger range.

In 2007, the FDA introduced Chagas screening for blood donors. "The FDA recognized the risk to our blood supply for several years," Montgomery explains, "because there have been documented cases of infection from receiving a blood transfusion."

There are currently two medications used to combat Chagas, both created over 40 years ago: Benznidazol and Nifurtimox. Neither is approved in the U.S., although the CDC allows both to be administered under compassionate use protocols.

That might be changing. There is no vaccine yet, but there have been recent advances. And on Dec. 3 KaloBios Pharmaceuticals, a company based in San Francisco, purchased worldwide rights to Benznidazol for the treatment of Chagas disease.

In Latin America, the disease is associated with poverty; the kissing bug tends to live in the cracked walls of adobe houses and in straw roofs. And in the past few decades there has been progress in Latin America's fight against Chagas. In 1991 the governments of Argentina, Bolivia, Brazil, Chile, Paraguay and Uruguay created the Southern Cone Initiative. Its goal was to use fumigation and pesticides to eliminate the principal type of kissing bug in the region, Triatoma infestans, and to select safe donors in regional blood banks.

Results are promising. In 2006, the Pan American Health Organization declared that Brazil had interrupted transmission of Chagas through Triatoma infestans. Several key provinces in Argentina have been declared free of Chagas by PAHO, which has also praised Central American countries like El Salvador and Honduras for eliminating rhodnius prolixus, a type of the kissing bug native to that region.

Still, there are millions of infected people throughout Latin America. "Chagas disease continues to be a public health problem in the region," stated Dr. José Ruales recently regarding Central America. Ruales works for PAHO in El Salvador.

Eduardo Galeano, another iconic Uruguayan author, put it more poetically:¨It does not explode like a bomb, nor sound like a shot. Like hunger, it kills silently. Like hunger it kills the silent, those who live condemned to be silent and die condemned to oblivion. Tragedy that rings no bells, patients who do not pay, a disease that does not sell. Mal de Chagas is not a business that attracts the pharmaceutical industry, nor is it a subject that interests politicians or journalists. It chooses its victims from the throngs of the poor, bites them and lingeringly, bit by bit, finishes them off. Its victims have no right — nor money — to buy the rights they do not have. They do not even have the right to know what they die of."