Accessibility links
The Director Of A Revolutionary Class Tells How To Convince Teen Boys To Treat Girls With Respect : Goats and Soda That's the way some groups hope to change the lot of women in India, who face some of the world's highest rates of sexual violence and domestic abuse.

How To Get Boys To A Class That Tells Them To Be Nice To Girls: #15Girls

How To Get Boys To A Class That Tells Them To Be Nice To Girls: #15Girls 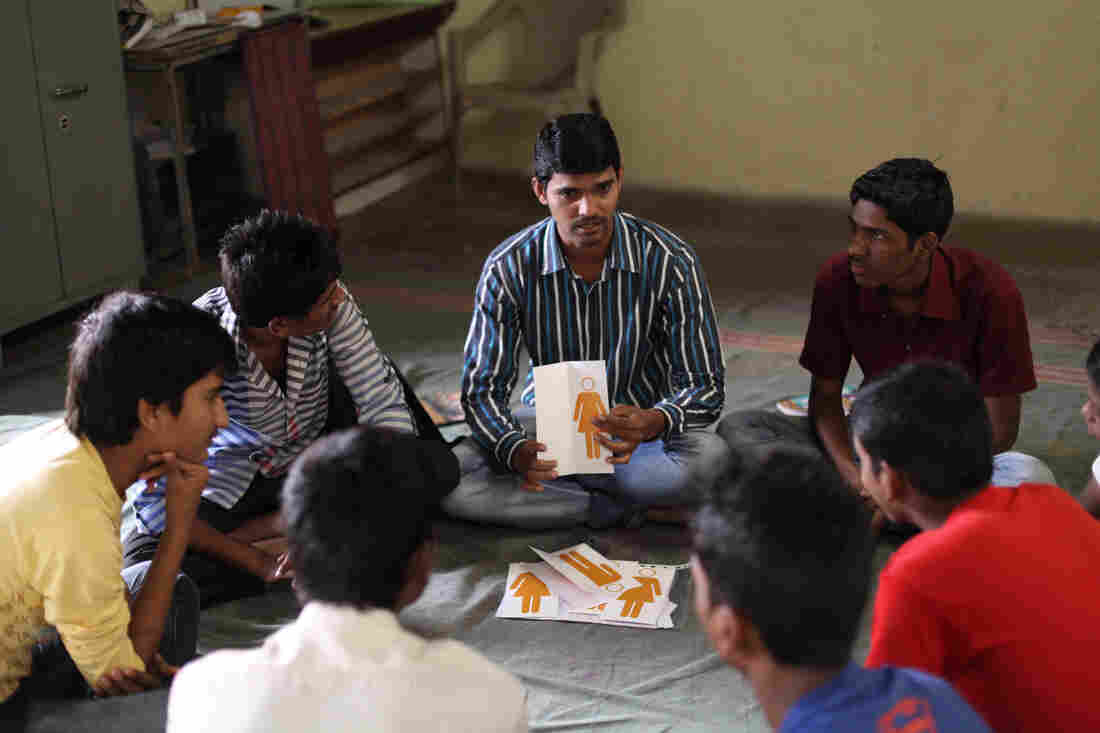 It's a three-hour class, once a week for 15 weeks. A mentor (center) leads the teen boys in a discussion. Equal Community Foundation hide caption 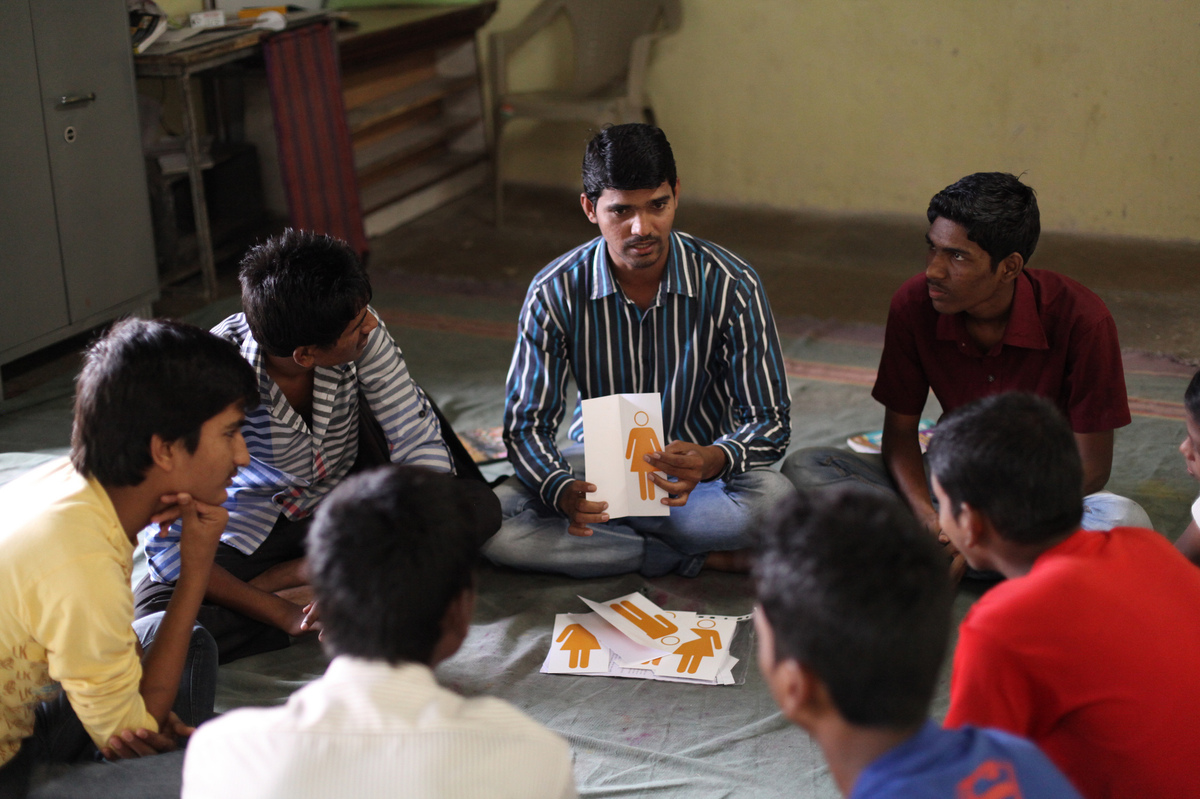 It's a three-hour class, once a week for 15 weeks. A mentor (center) leads the teen boys in a discussion.

How do you get boys to treat girls as their equals?

The question is an urgent one in India – where women face some of the world's highest rates of sexual violence and domestic abuse. Many groups are trying to combat the problem with programs to empower girls and women. But the founders of a non-profit called the Equal Community Foundation, or ECF, contend that's only half the answer: They say, you also need to change the mindset of boys.

So over the last five years ECF, which is based in the Western city of Pune, has been running an unusual series of classes there for boys aged 14 to 17. Once a week over a period of 15 weeks, the boys meet in groups of about 15. The classes are essentially three-hour chat sessions led by an older male teacher — in ECF terminology a "mentor" — who pushes the boys to rethink their attitudes about everything from who should wash the dishes in their house to how to react if they see a girl being teased on the bus.

As a graduation project, the boys must organize a community action event. It could be surveying women in their neighborhood about how often they face harassment, then publicly presenting the findings. Or it could be mapping which streets girls in their community consider too dark to be safe at night and writing to authorities requesting better lighting. So far about 1,700 boys have completed the program. And about 700 have gone on to join a corps of volunteers who organize additional action events.

NPR profiles one of ECF's newest recruits, a 15-year-old named Aniket Sathe, in a report.

I spoke with ECF's co-founder and director, Rujuta Teredesai Heron to find out more about the program. The interview has been lightly edited for length and clarity. 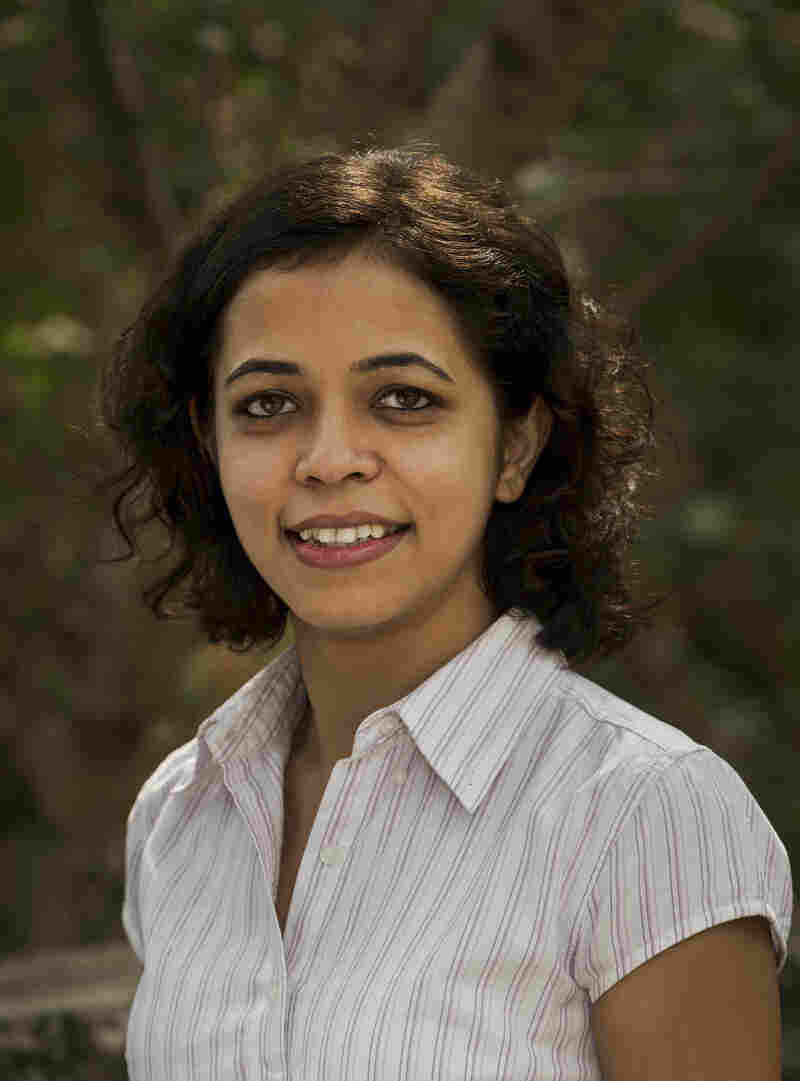 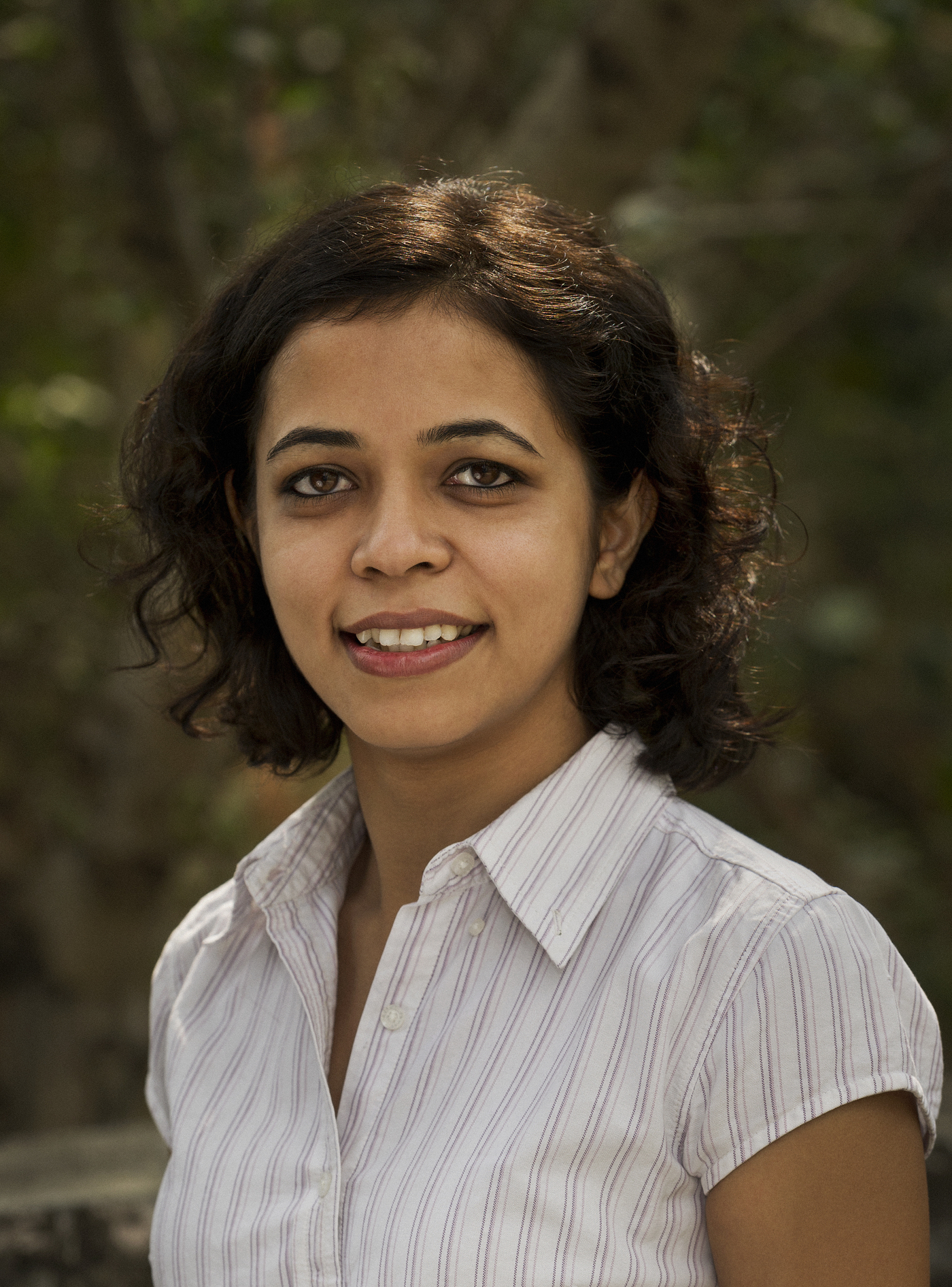 Rujuta Teredesai-Heron, cofounder and director of the Equal Community Foundation: "These boys are not born violent or discriminatory. If they're given the opportunity to do something different, they will."

Why did you decide to devote yourself to working with boys on this issue?

I was born and brought up in India. And when I was harassed on the street I would be told [by family and friends] to wear something different or to take a different route or to come home earlier in the evening. Nobody asked the men to change. It was me who was expected to change when I had done nothing wrong. So growing up with that experience, it really made me want to work with boys to change their attitude toward women. That's the root cause of the violence and gender discrimination that we're seeing, yet almost nobody is doing anything about it.

Neither you nor ECF's co-founder Will Muir had worked with boys before you created this model. Were there any surprises?

We went into the community assuming that boys were not going to be ready to change. And in the very first cycle of classes we saw immediately that the boys actually really want to change. The only reason it wasn't showing in the way they were behaving was because they hadn't been given the opportunity to learn and practice gender equality. The whole patriarchal structure, at every turn — be it in the culture, the religion, the media, the family — is reinforcing this stereotype that men are superior. But we realized these boys are not born violent or discriminatory. If they're given the opportunity to do something different, they will do something different.

Can you give me an example?

Take harassing a girl on the street. We have found that participants of our program often really don't understand what they're doing. They want to get a girl's attention. But they don't know how to speak to a girl. They think, "If I start staring at her she will start looking at me and fall in love with me." The media they're consuming — pop songs, Bollywood films — is telling them this behavior is okay, that when a women says "No," she means "Yes." It's really important to understand that these boys have never had the opportunity to know what equality means. Nobody talks to them about it. Sex education might be covered in school, but only the biological side. Nobody talks about the emotional side.

So in our setup, the boys can ask any question they want of the mentor. If they like a girl in school, what do they do about it? How do they manage their feelings? The class becomes a safe space. And when we talk about these issues we say to them, "Well if you wouldn't like to be treated a certain way, why would a girl want to be treated that way?"'

It sounds like a lot of this is about getting the boys to empathize with girls.

Especially when the boys come from low income communities, there's a lot of discrimination because of their caste or religion. We talk about that. Then we connect their experience to the discrimination women face, to help them broaden their focus to human rights issues in their community in general.

What changes do you tend to see in boys who complete the program?

Mainly it's simple things: Boys start doing more of the domestic chores at home. Or, if they were using abusive language toward their sisters, they stop. If they were harassing girls on the street, they stop.

How do parents react when they see their sons suddenly taking up the housework that their daughters were doing. Do you ever encounter resistance?

Yes, especially the mothers will say at first to the boy, "This isn't your responsibility. Let your sister do the household chores." But then the boy will tell the mother what he's been learning in the class and explain why he is doing this. And the mother will start to notice other changes in her son that she likes — that he's more responsible at home or is expressing himself in a better way. Sometimes the boy also becomes a better student at school, attending more regularly. So it's a gradual process that varies from one family to another.

How do you get these boys to join the class in the first place? Why would a bunch of teenage boys agree to spend three hours a week talking about women's rights?

Well now there's a lot of positive peer pressure to join from friends who are already in the program. And there's another piece: Boys will notice that other boys in their community who used to be known as good-for-nothings suddenly start getting respect after graduating from the program. The former good-for-nothing boy is now taking action on domestic violence and sexual harassment. People in the community are taking notice of him. Girls look at him in a different way. They may now want to talk to him. So the other boys see the benefits of the class in that simple form.

Do you have plans to expand this program to other parts of India?

We recently started working in West Bengal [in northeastern India] with eight organizations with which we're starting partnerships to replicate our model. And our big dream is to build the capacity of 100 organizations across India to do this work.