Accessibility links
The 2015 Winners of USAID's Powering Agriculture Challenge : Goats and Soda A milk chiller run on manure. A sun-powered pond aerator. These are some of the creative ideas that could change the game for the world's poorest farmers. 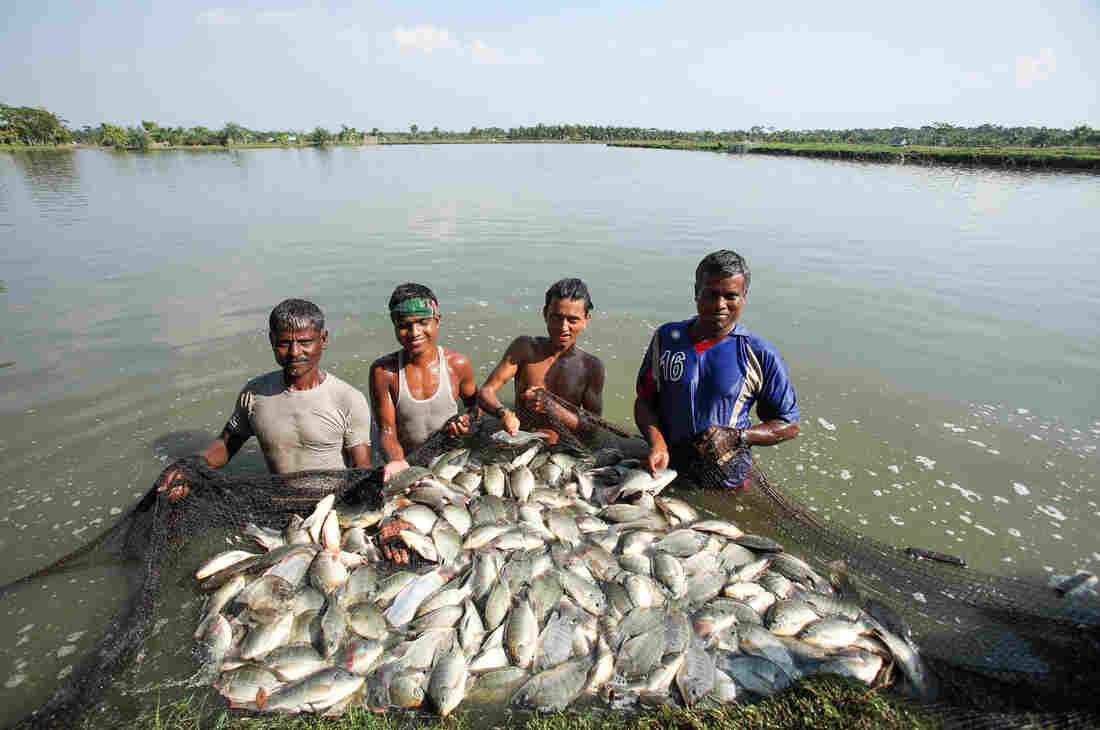 toggle caption
Courtesy of Powering Agriculture and University of Toronto 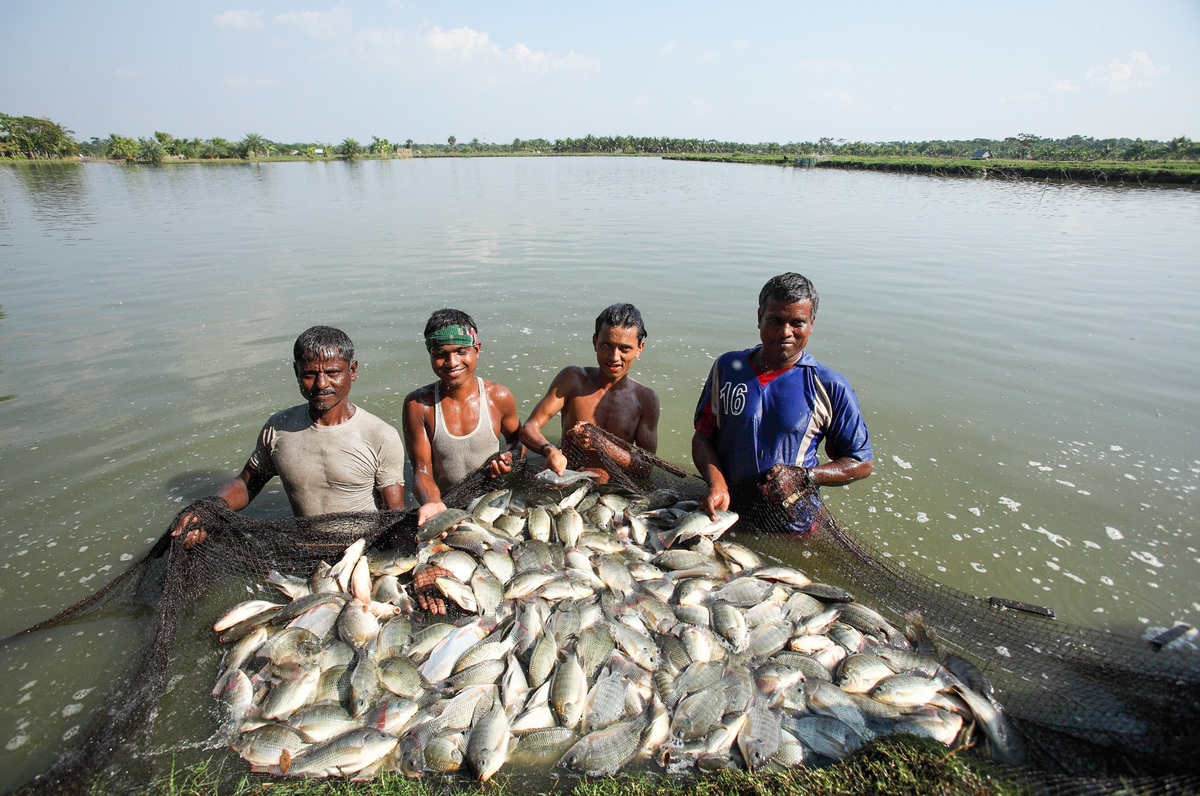 The University of Toronto's solar-powered pond aerator could help fish farmers in Bangladesh earn up to $250 of extra income a year.

Courtesy of Powering Agriculture and University of Toronto

What if a cow's manure could help refrigerate her own milk?

That's one of this year's winning ideas for Powering Agriculture, a program started in 2012 to identify innovators who are creating Earth-friendly ways to increase food production in low-income countries. A partnership between USAID, the governments of Germany and Sweden, Duke Energy and the Overseas Private Investment Corp., the program awards from $500,000 to $2 million (plus mentoring and training) to startups tackling clean energy projects for small-scale farmers.

The goal is to plan ahead to make sure we can feed the global population — expected to reach 9.6 billion by 2050 — without doing harm to the planet in the process.

"This is a departure from how development was done before," says Ryan Shelby, an engineering adviser who coordinates Powering Agriculture for USAID. "In the old days, you had an engineer create an energy technology when you needed it. But no one was thinking about sustainability, social impact, innovation or business design." 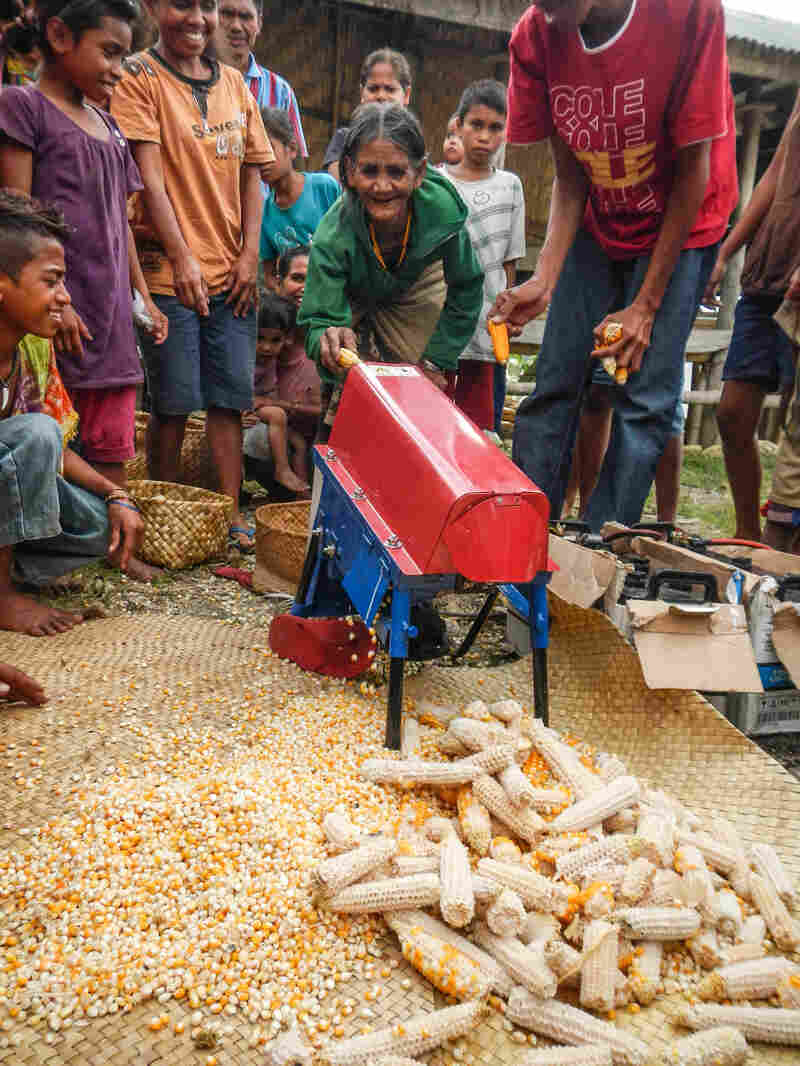 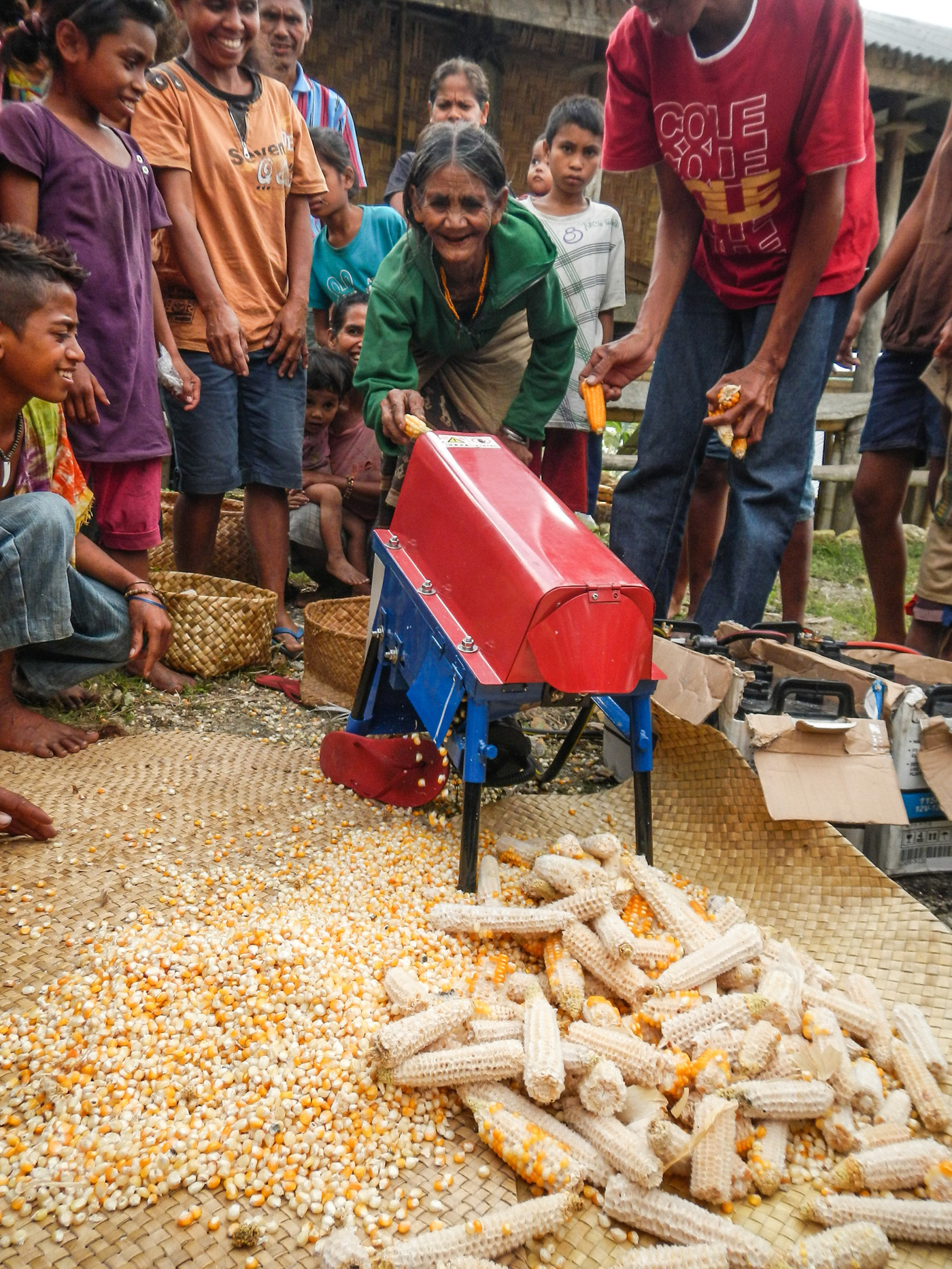 These farmers in Indonesia used to remove corn kernels by hand. Village Infrastructure Angel's solar-powered mill speeds up the process.

Here's a profile of four of the 11 winners. (And yes, they do sound just as quirky and too-good-to-be-true as the products in a SkyMall catalog.) The first three projects are still in the research and development stage, but Village Infrastructure Angels is already working with early adopters.

The problem: Fish farming is a big industry in low-income countries. But fish need oxygen to live, and freshwater ponds can become stagnant. Aeration equipment introduces oxygen to keep the water circulating and the fish kicking. Unfortunately, these devices are expensive and require a lot of electricity — something that farmers in rural areas don't always have.

The solution: The University of Toronto is proposing a solar-powered aeration device that uses materials readily available in rural areas. This product, which looks like a large, floating black disk, grabs sunlight and turns it into heat that warms up water at the bottom of the pond. That water then rises to the top of the pond, spreading oxygen-rich H2O throughout. This device could help fish farmers earn up to $250 of extra income each year and cultivate larger fish that sell for more dollars at the market.

The Milk Chiller Of The Future

The problem: In East Africa, cows produce a lot of milk, but only 15 percent of it reaches the market. The reason? The milk has gone bad. If farmers had a way to cool their milk back at the farm from the very start, their milk could stay fresher longer. But 85 percent of the farmers in the region are off the power grid, so the solution can't rely on electricity.

The solution: SimGas Tanzania, a company based in the Netherlands and East Africa, is developing the first off-grid, biogas-powered milk chiller to help small dairy farmers keep their milk fresh enough to get to market. (Biogas, in case you're not a science nerd, is created from cow manure.) The amount of manure produced by three cows in one day can cool nearly 3 gallons of milk from 98 degrees Fahrenheit to 39 F within three hours, keeping it fresh until it reaches the market.

The Uber Of Solar-Powered Irrigation

The problem: Farmers who aren't connected to the electrical grid in India need a diesel pump to operate the pump that brings up groundwater to irrigate their crops. But diesel fuel is expensive and a major pollutant. And it's a waste of time for farmers to rent a diesel pump and a truck to drive it back to the farm.

The solution: Claro Energy, an India-based startup, hopes to create a pay-per-use irrigation service. An operator will drive a truck carrying a portable solar-powered pump. Like Uber, farmers can schedule the service by using an app on their mobile phones or calling a toll-free line. Because of solar energy's lower cost, farmers can afford to irrigate even more land than with a diesel pump.

The Grain Mill That Saves Time And Money

The problem: In rural villages without reliable electricity, residents thresh, grind, winnow and peel rice, corn, cassava and other crops by hand, a process that can take hours. Or they could walk up to half a day to rent a diesel-powered mill — and then take another long walk to return it when they're done.

It's A Necklace And It Could Be A Lifesaver: Wearable Health Gadgets

The solution: Village Infrastructure Angels, a U.K.-based group that brings affordable electricity to the developing world, plans to install solar-powered mills in villages in Indonesia, Papua New Guinea, the Philippines and Vanuatu.