Accessibility links
New Map Shows Parts Of The World Where The Risk Of Humans Catching Diseases From Bats Is Highest : Goats and Soda A new map shows where the risk is highest for humans catching diseases from bats. But the researchers urge humans to remember: Bats do a lot of good, too! 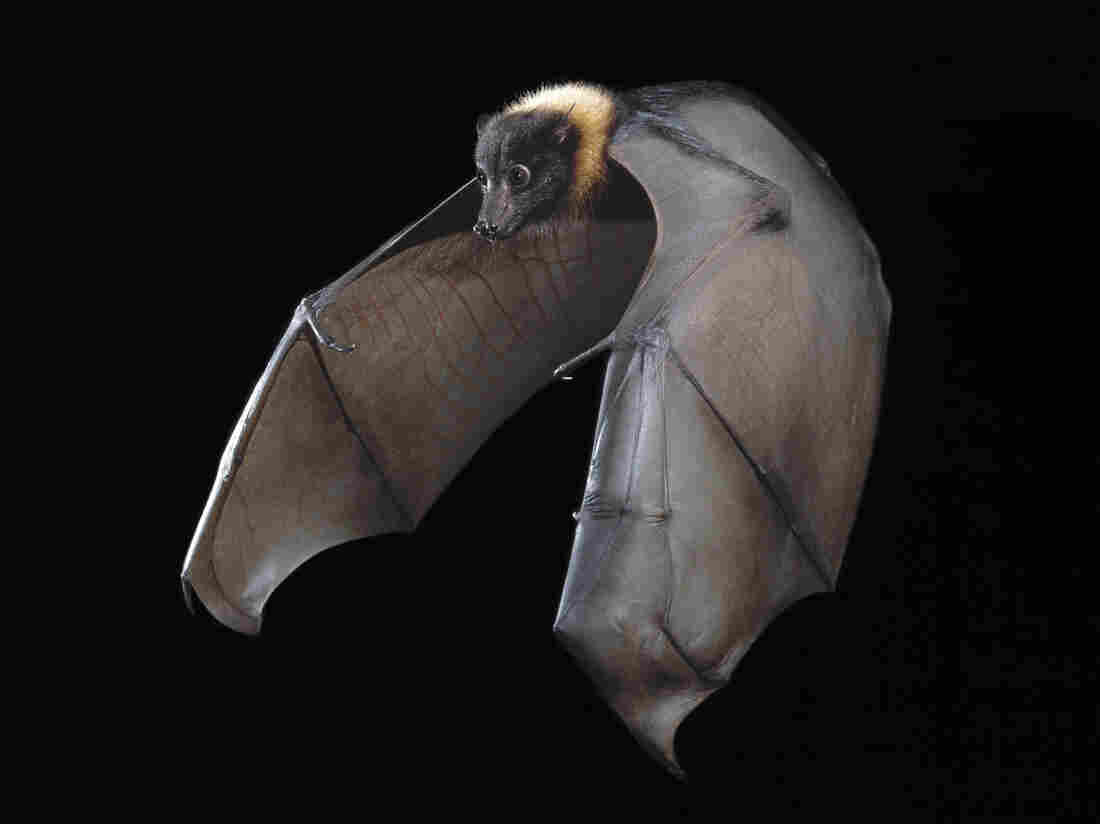 The Indian fruit bat known as the flying fox can harbor diseases that other animals — and humans — can contract. Stephen Dalton/Science Source hide caption 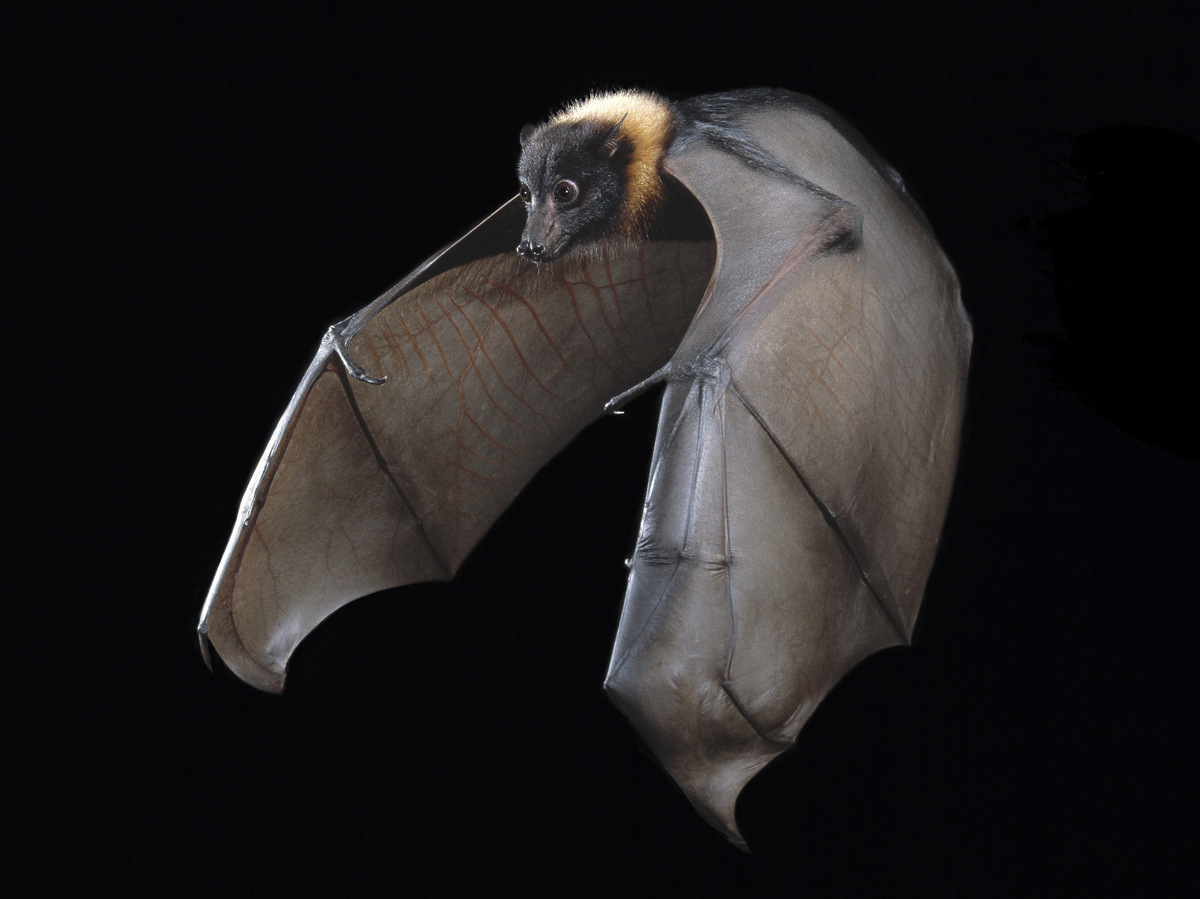 The Indian fruit bat known as the flying fox can harbor diseases that other animals — and humans — can contract.

A new map published in the February edition of The American Naturalist highlights the hot spots where diseases are most likely to spill over from winged to bipedal mammals.

The biggest hot spot is in sub-Saharan Africa, where people continue to hunt bats as bushmeat. Southeast Asia is another danger zone.

A large swath of South America, meanwhile, emerged as a region where bats carry a particularly diverse array of viruses, although contact between bats and people there happens less frequently.

The map shows hot spots where the risk is highest for bats passing diseases to humans, based on degree of bat-human contact and number of diseases carried by regional bats. Red is superhot. Green is cool. Yellow is in the middle. Courtesy The American Naturalist hide caption

By identifying areas where the variety of viruses is richest and the risk for transmission is highest, the team hopes to help focus resources on the most important targets for research and public health efforts.

"What we're trying to do is point out these high-risk areas so that we can find out why they're high risk," says Liam Brierley, a disease ecologist at the University of Edinburgh in the United Kingdom and co-author of the article about zoonotic bat viruses that featured the map. Another hope is to stop diseases from spreading beyond bats in the first place.

For reasons that aren't exactly clear, bats are particularly good at carrying diseases that also infect people. At his last count, Brierley says, the list of shared viruses totaled 33. Researchers now suspect that Ebola likely occurred in bats before infecting primates and then people. Bats have also been implicated in the spread of SARS, rabies and more.

Previous studies have identified some hot spots where new diseases are most likely to spread from wild animals to people. To refine this geographic search for so-called zoonotic diseases with a specific focus on bats, Brierley and colleagues started with more than 100 years of data about which bat species carry which viruses.

They turned those data into a map showing where the variety of diseases is expected to be greatest. Then they added layers of information about the kinds of situations that increase the risk for bat-to-human disease transmission, such as the expansion of farmland and urban areas into bat habitats.

The first identified outbreak of the Nipah virus (an often severe and frequently deadly disease that can cause brain inflammation), for example, occurred in the late '90s and was linked to pig farms that bordered bat habitats in Malaysia. Bats very likely dropped fruit into pigpens, Brierley says. The pigs became infected with exposure to bat urine and saliva, and people became infected after close contact with infected pigs. Now people regularly spread the disease to other people in Bangladesh and India.

Preventing disease transmission from bats is not a lost cause, says William Karesh, a zoonotic disease expert at EcoHealth Alliance, an international conservation organization in New York. One important strategy, he says, is to educate hunters about proper hygiene, like washing hands and avoiding direct contact with bat blood.

Sometimes, prevention efforts are remarkably simple and cheap, he adds. One outbreak of Nipah virus in Bangladesh was traced to pots left out overnight to collect date palm sap from trees. Bats were contaminating the pots with feces and urine, which was spreading disease as people consumed the sap. All it took was covering the pots at night to keep people from getting sick.

Another benefit of the new research is that it can give advance warning to the veterinarians and doctors who treat sick livestock and people about where they need to be most alert to the unexpected, Karesh says. Medical professionals in parts of Africa, Asia and South America, in particular, should be on the lookout for new diseases if tests for traditional diseases turn up negative.

What the results don't mean, Brierley says, is that people should fear bats. After all, there is plenty of good that bats do for us. They eat insects. And they pollinate some crops, including coffee. It's not their fault that we keep encroaching on their habitat or that we share susceptibility to so many of the same viruses.

"We can't expand into natural bat habitat," Brierley says, "and then blame the bats."