Accessibility links
West Africa Is Ebola Free But Researchers Still Have Lots Of Unanswered Questions : Goats and Soda The World Health Organization declared West Africa officially Ebola-free on Thursday, but more cases are likely, and scientists say they have a lot of unanswered questions. 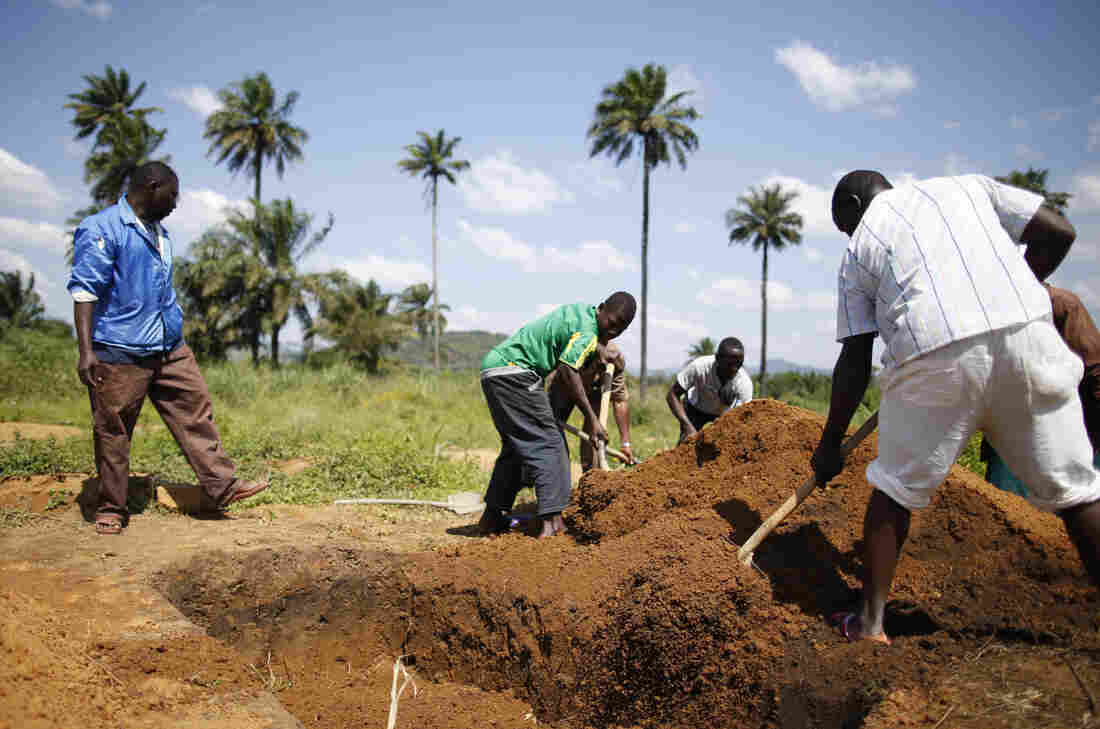 Guinea is where the Ebola outbreak started in West Africa. In this photo from November 2014, workers from the local Red Cross prepare to bury people who died of the virus. Kenzo Tribouillard /AFP/Getty Images hide caption 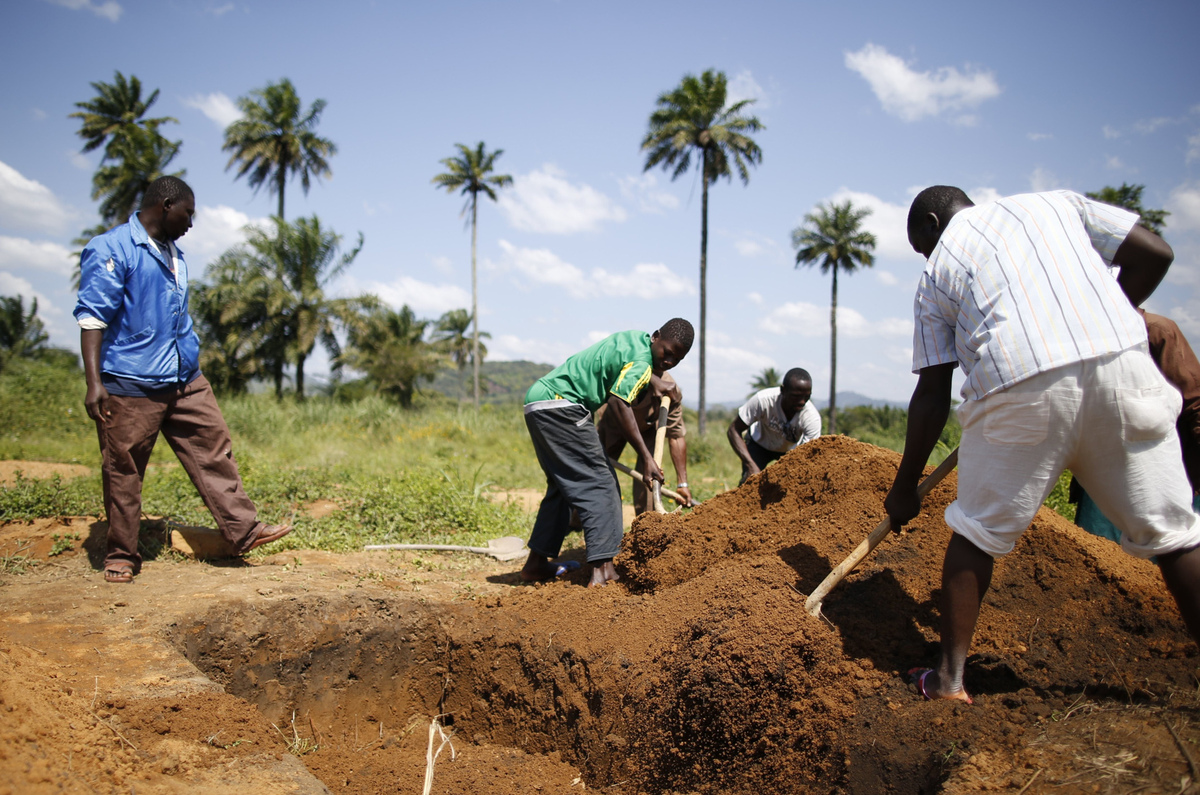 Guinea is where the Ebola outbreak started in West Africa. In this photo from November 2014, workers from the local Red Cross prepare to bury people who died of the virus.

The Ebola outbreak in West Africa may be officially over — the World Health Organization made that momentous announcement Thursday, but more cases are likely to crop up and crucial questions about the disease remain unanswered. We asked Dr. Daniel Bausch, an expert on Ebola who is now working with the World Health Organization, to list the top five mysteries researchers still need to clear up.

How did the virus reach West Africa?

For decades, Ebola disease was confined to remote regions of Central Africa — thousands of miles from Africa's populous Western coast. Researchers were able to use genetic sequencing to determine that the earliest known case of Ebola in the West African outbreak was a young boy in Guinea who was infected in December of 2013. And they believe it's likely he got the disease from a bat. This doesn't necessarily mean that this one contaminated bat flew all the way from Central Africa, notes Bausch. You could have a bat that flies a couple of hundred miles to the northwest, then roosts with other bats, which, in turn, contract the virus. So over years or even decades the virus gets passed from one bat colony to another.

Still, Bausch says, this whole theory is remarkably speculative. "You know, we talk about bats. But no one has ever grown an Ebola virus from a bat." In other words, scientists haven't even established how exactly bats get contaminated and what precisely they're contaminated with. And even if bats are to blame, he adds, we have no real understanding of how transmission to humans occurs.

Then there's the role of what Bausch terms "bat ecology." For instance, it's possible that heavy rains can produce a lot of food for a bat population that harbors the virus, allowing the bats to reproduce to a degree that greatly increases their chance of coming into contact with humans. But very little is known about the particulars of this dynamic — what weather conditions create it and in which locations, for instance.

"Understanding that complex process is what's going to enable us to predict where the next outbreak is going to happen," says Bausch.

Why do so many Ebola survivors experience health problems after they've recovered?

There's a grim list of challenges that many Ebola survivors are grappling with: severe eye inflammation that can lead to blindness, debilitating joint pain, hearing difficulties, erectile dysfunction, depression. That took researchers by surprise, says Bausch.

"The dogma prior to this outbreak was that survivors got better after a time. That even though they had been through hell, once they got better that was the end of it — they were OK. But now we're recognizing that there are a lot of problems that can persist for a long time."

The first step has been trying to sort out which challenges are truly related to Ebola and which are issues the person would have experienced anyway. Bausch says the jury is still out when it comes to hearing loss, for instance.

By contrast, the link between Ebola and subsequent eye inflammation seems strong. About one-fourth of Ebola survivors have developed these symptoms, says Bausch.

Even here important questions remain. In some cases the patient actually has Ebola virus in their eye, suggesting that the inflammation is directly caused by the virus and anti-viral medication should be developed to treat it. But in others the virus is not present in the eye — suggesting that the cause might be some kind of problematic immune system response that developed as a result of the initial Ebola infection.

"It's only once you understand why these things are occurring that you can start to develop therapies to treat them," says Bausch.

Could this kind of resurgence of the virus in a survivor spark a new outbreak?

As far as researchers can tell, when Ebola virus flares up again in a survivor, the person doesn't develop full-blown Ebola. Instead, the virus causes problems in a particular part of their body. The most common seems to be that eye infection. And in those cases, the Ebola virus is basically trapped inside the eye, so it can't be transmitted to other people.

But that's only one scenario. Consider Scottish nurse Pauline Cafferkey, who contracted Ebola while working at a treatment center in Sierra Leone. She survived, but months later, Ebola virus in her cerebral spinal fluid caused her to develop meningitis. And some Ebola virus did get back into her bloodstream. In such instances, says Bausch, there is a remote chance that the person could infect others who come into contact with bodily fluids that contain the virus.

How common are cases such as Cafferkey's? It's yet another mystery. Health officials are not aware of any others. "But we don't know if that's because hers is the only one we happened to be there to document or because it's genuinely unusual in the population," says Bausch.

What happens when a pregnant woman contracts Ebola?

There is much to learn, but what we do know is sobering. Bausch says that as far as researchers can tell, even if a pregnant woman who is infected with Ebola survives, the fetus will not. Often the woman will miscarry while she is still sick. But she may not actually lose the fetus until after she recovers. In those cases, the baby is stillborn.

At that point while the woman no longer has Ebola virus in her blood, the stillborn child that she delivers will still have the virus in its blood — posing a risk to health care workers who assist with the delivery. In a few cases, workers are suspected to have been infected under these circumstances. The risk of a renewed outbreak of cases through this particular mechanism is small, says Bausch. And it will presumably vanish once every woman in West Africa who survived Ebola while pregnant concludes her pregnancy. Still, he says, "it's something we are really trying to get a handle on."

Did any of those experimental treatments that people were clamoring for during the outbreak – the ZMapp drug, the infusions of blood plasma from survivors — actually work?

Research into a treatment for Ebola kicked into overdrive during the West Africa outbreak. Pharmaceutical companies mobilized with impressive speed to churn out sufficient quantities of promising drugs for testing. Regulators took unprecedented steps to smooth the way for clinical trials. All the same, "by the time we were ready to do the trials, the bottom of the outbreak had dropped out and the cases started to fall away. Suddenly there were no patients," he says.

So while there's reason to feel hopeful about some of the treatments — Bausch cites not just ZMapp but compounds from the companies Gilead Sciences and BioCryst — the data is still too limited.

He's also been underwhelmed by the findings regarding another treatment approach that was all the rage during the outbreak: transferring blood plasma (and the antibodies for Ebola therein) from an Ebola survivor into a sick person. Studies to date haven't been able to prove the effectiveness of that strategy. Bausch concedes that this may be because the levels of antibodies in any given survivor's plasma varies. "It could be that not everyone got the good stuff, if you will. And if you did get the good stuff it did make a difference."

There is at least good news on the prevention front: A vaccine for Ebola has performed well in tests.

Still, when it comes to treating patients, the bottom line, says Bausch, is "we haven't come out of this being able to say, 'This one is great. Now we have a treatment for Ebola.'"