Accessibility links
The State Of The Union Called For An End To Malaria But Parasites And Mosquitoes Are Fighting Back : Goats and Soda His State of the Union address said we should be able to wipe out malaria. Progress has been enormous — but researchers are alarmed by new twists. 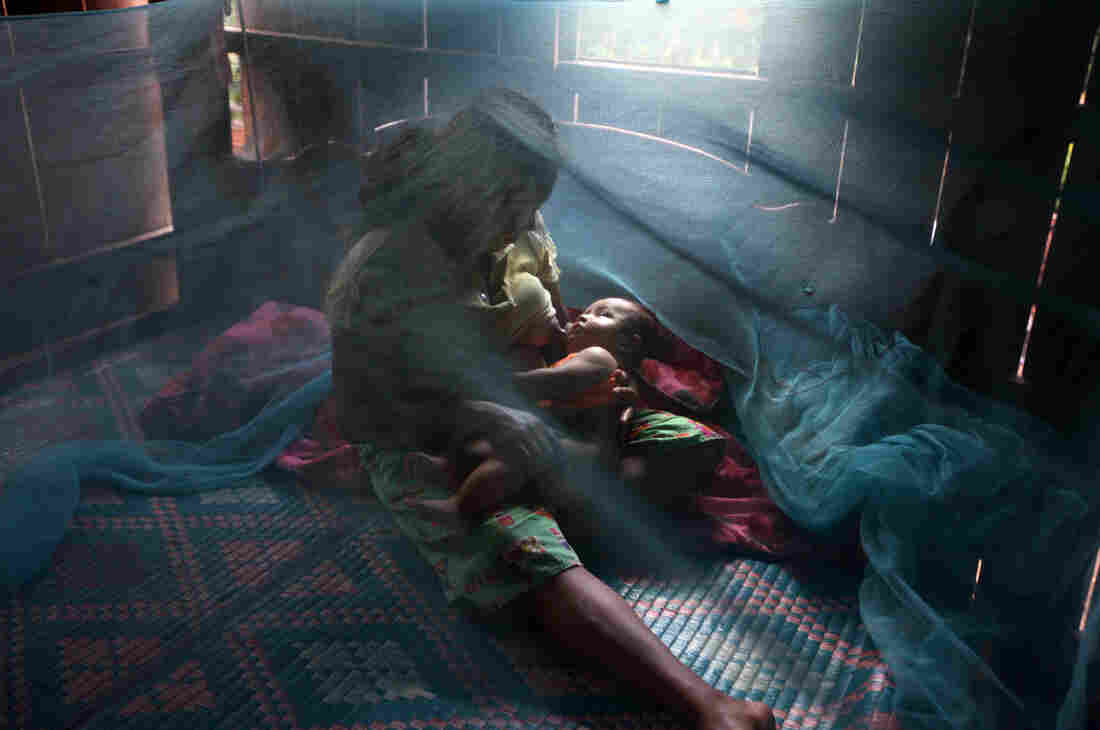 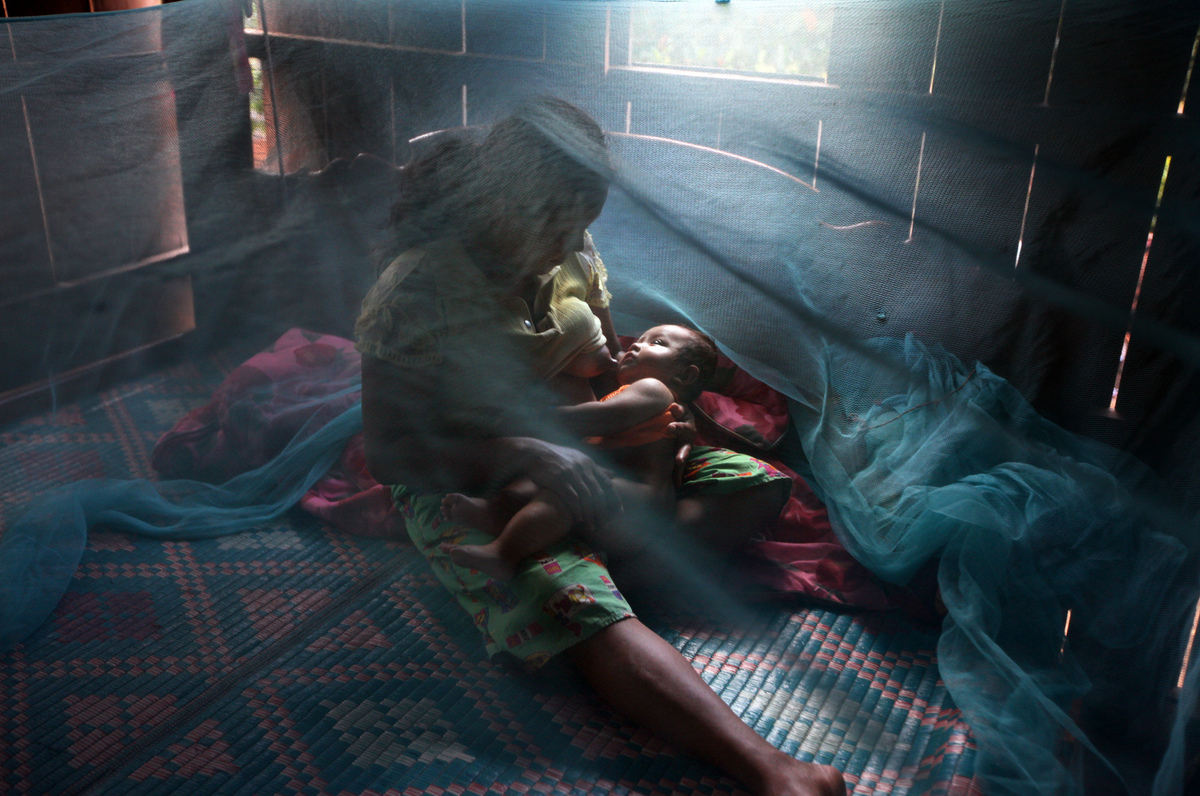 Yonta, 6, rests with her sister Montra, 3, and brother Leakhena, 4 months, under a mosquito bed net during monsoon season in July 2010, in Pailin province, Cambodia.

President Obama took a moment in his final State of the Union Address Tuesday to voice optimism that people have the power to bring an end to the worldwide menace of malaria.

"Right now, we are on track to end the scourge of HIV/AIDS, and we have the capacity to accomplish the same thing with malaria — something I'll be pushing this Congress to fund this year," Obama said.

That's just the latest indication of the hope generated by progress made in the past decade in treating and preventing malaria. Since 2000, the rate of new malaria infections around the world has dropped by 37 percent — and death rates have fallen by 60 percent, according to the World Health Organization (WHO). Even better, last year the WHO reported that nine of the 97 countries where malaria once circulated have eliminated the disease, according to WHO.

Even malaria's heartland, sub-Saharan Africa, has seen a 66 percent decrease in malaria deaths since 2000, thanks largely to a combination of effective drugs and widespread use of insecticide-treated bed nets to keep malaria-carrying mosquitoes at bay.

But there are discouraging signs in the global fight against malaria.

"There's a lot of concern about how long those tools can continue to work," says Dr. Patrick Duffy, chief of Laboratory and Malaria Immunology and Vaccinology at the National Institute of Allergy and Infectious Diseases.

Newly reported cases of resistance to malaria drugs, and some signs that mosquitoes are becoming resistant to insecticides, are worrisome. If resistance spreads, it could derail more than a decade of improvement in controlling malaria. Some 3.2 billion people live in parts of the world, many in sub-Saharan Africa, where malaria continues to be a threat, according to WHO. Last year, there were 215 million cases and 438,000 deaths from the disease.

Concerted efforts to fight the disease, such as Medicines for Malaria Venture, the Malaria Vaccine Initiative and the Innovative Vector Control Consortium, formed in the early years of this century as malaria deaths climbed, peaking in 2004 at more than 800,000. Worldwide, malaria funding has increased almost tenfold since 2000, according to the Bill and Melinda Gates Foundation, which has invested more than $2 billion in the fight against malaria since 2000. (Note: As readers of this blog may know, the Gates Foundation is also a funder of NPR.)

But parasites and mosquitoes evolve in ways allowing them to fight back, developing resistance to some of the world's most powerful medical tools. The most recent threat to progress was highlighted in a study, published in the journal The Lancet Infectious Diseases last week, finding treatment failures in Cambodia because malaria parasites have developed resistance to the first-line treatment, a combination of the drugs artemisinin and piperaquine.

"This is quite alarming," says Dr. Rick Fairhurst, chief of Malaria Pathogenesis and Human Immunity Unit at the National Institute of Allergy and Infectious Diseases, and an author of the study on drug resistance in Cambodia. "If artemisnin resistance spreads to Africa, there will be setbacks in reducing the number of deaths."

Drug resistance can develop when people are given improper doses of a drug, killing some parasites but allowing the growth and spread of resistant parasites. Southeast Asia is the focus of recent concern.

"Western Cambodia, where I work, is the epicenter of multi-drug resistant parasites," Fairhurst says.

In a clinical trial, researchers found that patients in three regions of Cambodia were returning after treatment with malaria still in their blood streams, continuing to have symptoms — and still able to transmit infection to others. When resistance to malaria drugs occurs in this region, Fairhurst says, it can spread quickly around the world.

As a stopgap measure in the areas in Cambodia where drug resistance has appeared, researchers are trying a three-drug regimen, adding mefloquine — a drug earlier paired with artemisnin until it, too, showed signs of resistance — to see if the three drugs together will be effective, Fairhurst says. As researchers try swapping in existing drugs to standard regimen to fight resistance, others are working on new anti-malaria drugs but, says Fairhurst, those drugs are likely four to five years away from being available.

It would be difficult to introduce new drug regimens to some of the world's poorest countries, countries already struggling with scarce resources, if the drug-resistant strain travels to sub-Saharan Africa, home to 89 percent of malaria cases.

"We know that if resistance spreads to India or Africa, it would have a very serious impact on our ability to treat malaria," says David Brandling-Bennett, senior advisor to the malaria program at the Bill and Melinda Gates Foundation.

The world health community knows the disastrous consequences of malaria drug resistance from past experience. In the 1960s, the drug chloroquine was used as the front-line treatment for the disease. Then resistance to the drug began to develop in Southeast Asia, and by the 1980s the resistant strain of the disease had spread across Africa. By the 1990s, the drug was no longer an effective treatment in Africa or most other countries plagued by malaria.

"We know that in the 1980s and 1990s, there was as much as a threefold increase in death rates," says Fairhurst — the increase due to the failure of chloroquine as an effective treatment. It could happen again, he says, if the resistance emerging in Cambodia is unleashed on the rest of the world.

On another front, mosquitoes themselves are showing signs of becoming resistant to the insecticides used to soak bed nets and spray on walls. The malaria-carrying mosquitoes in Africa commonly bite at night, and the nets keep them away when people sleep — or kill the bugs when they land on walls. Since 2010, according to WHO, 60 countries have reported resistance to at least one form of insecticide called pyrethroid. Innovative Vector Control, working with the Gates Foundation, is trying to move quickly to develop new insecticides in order to stay ahead of the problem. But the clock is ticking.

"The prediction is that widespread resistance to pyrethroids is likely to hit a crisis point around 2020," Brandling-Bennett says. "People are working very hard ensure that new insecticides are available by 2019."

As drug and insecticide research urgently moves forward, the holy grail of disease prevention — a vaccine that can permanently immunize populations against malaria — shows promise.

"The urgency for a vaccine mounts as concern in those other areas increases," Duffy says.

And, for the first time in the long fight against malaria, a vaccine has shown protective effects against the disease in clinical trials. The results have been modest, but its success may pave the way for improved vaccines, Duffy says.

One promising candidate is RTS,S, or Mosquirix, a vaccine that aims to trigger the immune system and prevent the parasite from infecting the liver, where it matures, multiplies and re-enters the blood stream, causing disease symptoms. Early trials showed it was safe for children and infants. Later trials, reported in July 2015 in The Lancet, found that three monthly doses in infancy and a booster at 20 months reduced the incidence of malaria in children by up to 36 percent over about four years. Those modest results will help pave the way for improved vaccines, Duffy says.

With new reports of drug resistance, a tipping point looming for insecticide resistance, and vaccines so far showing only modest preventive effects, the ongoing fight against malaria is at a critical stage. The world must push ahead to find answers.

"I've been working with malaria for 40 years," Brandling-Bennett says. "I'm optimistic because of the changes I've seen in the past 10 years. We can do it."