Accessibility links
Zika Virus Has Been Linked To Microcephaly In Brazil. Is The State Helping Affected Families? : Goats and Soda The government is trying to wipe out Zika virus, which has been linked to a severe birth defect. But is it doing enough to help families whose children have been affected? 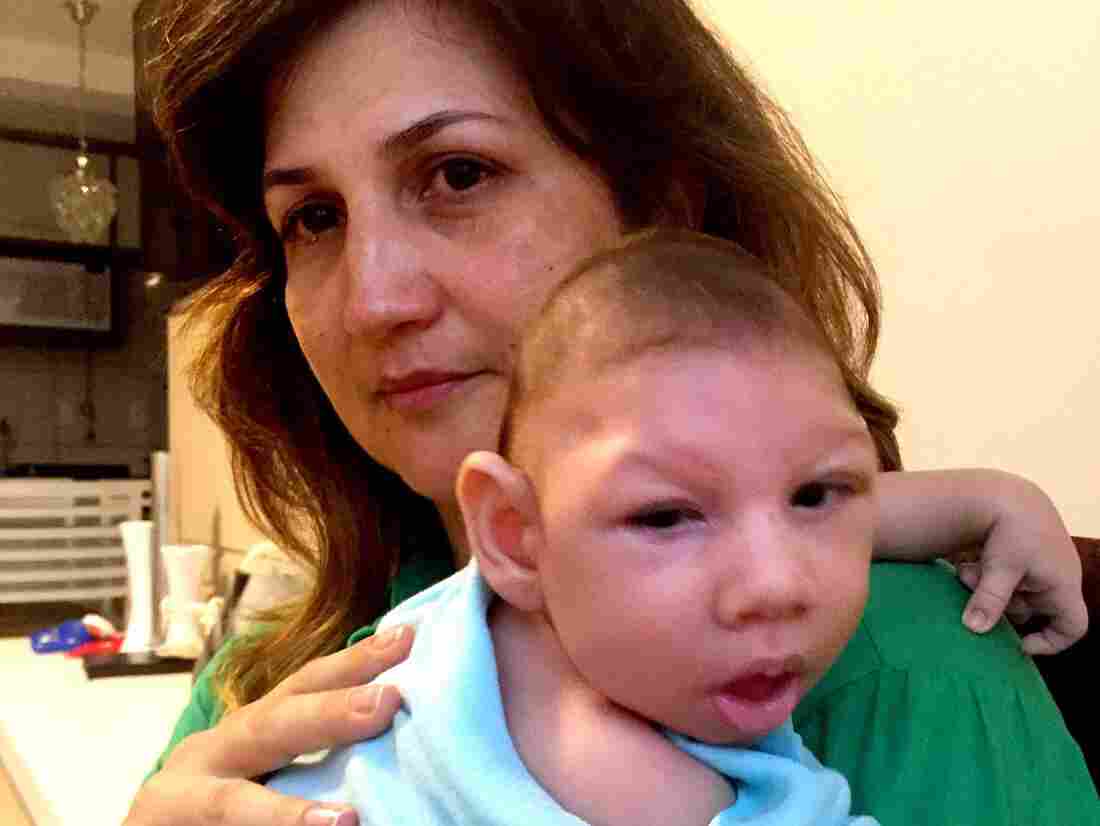 Marilla Lima had Zika virus while pregnant. Her 2 1/2-month-old son, Arthur, has microcephaly — a birth defect characterized by a small head and severe brain damage.

"We are alone. We have been abandoned by the state," says Marilia Lima, cradling her 2 1/2-month-old son, Arthur, against her chest.

Arthur is one of some 3,500 babies born with microcephaly, a birth defect that has been linked to Zika virus, since the virus was identified in Brazil in May. Although a definitive cause-and-effect relationship has not been proven, both Brazilian and international doctors believe there is indeed a connection.

Lima caught the mosquito-borne virus when she was pregnant. At the time, little was known about Zika, and her doctors told her not to worry. But in her next prenatal checkup, it became clear there were major problems with the fetus. Her son was born with a markedly small head, which almost looks as if it were placed in a vise at the top. That's typical of microcephaly. The severe brain damage affects all aspects of a child's development, both physical and mental. 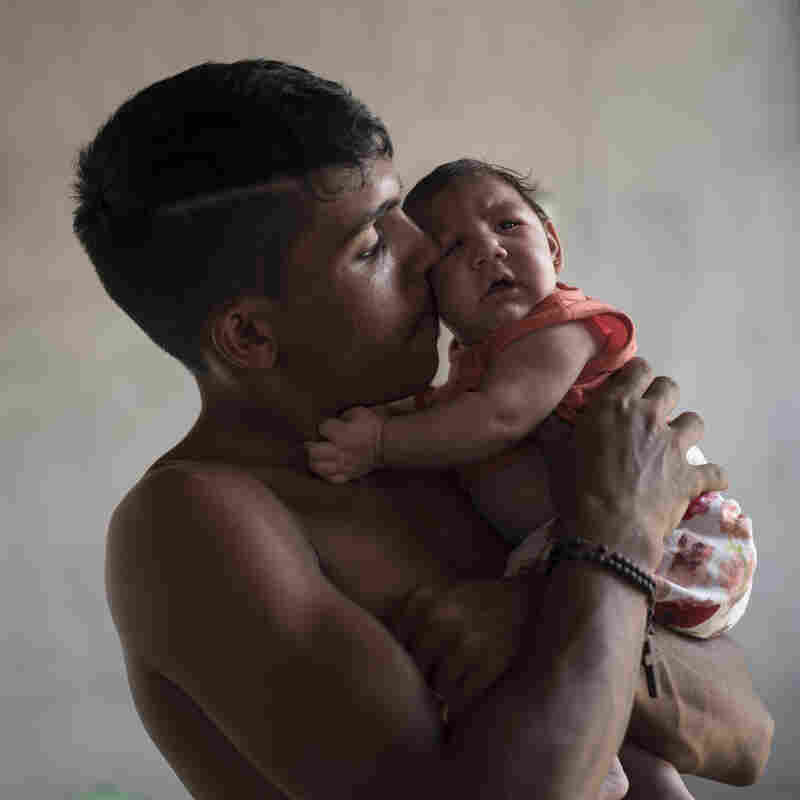 Dejailson Arruda holds his daughter, Luiza, at their house in Santa Cruz do Capibaribe, Pernambuco state, Brazil, in this December 2015 photo. The child was born with microcephaly. Felipe Dana/AP hide caption

Dejailson Arruda holds his daughter, Luiza, at their house in Santa Cruz do Capibaribe, Pernambuco state, Brazil, in this December 2015 photo. The child was born with microcephaly.

Arthur is constantly fretful and hard to soothe. He doesn't suckle well. He has problems with his eyes, his hip and the bones in his legs and arms.

"It's still something that doesn't feel real to me yet," says Lima, a civil servant who is a sociologist and a lawyer, "but I am at the point where I can't think. I just have to act. I have to take care of him, look after all his needs."

She has the support of her husband, family and friends. But she believes the government has forgotten about the babies and their parents — and she also blames it for her plight. She says Brazil has suffered an epidemic of dengue, which is carried by the same mosquito as the Zika virus, and the authorities have been negligent in their eradication efforts, which has contributed to the spread of Zika.

Nor does she find much help from the medical establishment. Brazil has a national health service on which the majority of the population relies. She'll chase down one doctor, who refers her to another. "The doctors don't understand much about the situation either, because it's all very new," she says, speaking in her well-appointed apartment in one of the best neighborhoods in Natal, in northeast Brazil.

Zika Virus Confirmed In Texas: Here's A Primer On The Disease

"We have had no follow up and bad service at the hospitals," she says. "We know that there is a ticking clock with these babies; they need certain stimuli at certain points in their lives if they are going to survive." But most children born with this condition have limited life expectancy, on average about 10 years, though some have lived into their 30s.

When Lima falls asleep, she wonders if she will wake up to find Arthur dead. "It's as if they see us as a lost cause," she says. "The government's attitude seems to be, 'They have been contaminated, so let's focus on the ones that haven't been damaged yet.' And it's not just the kids, it's the whole family who is affected when something like this happens. It's just devastating."

The virus only arrived in Latin America last year, but Brazil has reported at least half a million cases, and Zika has spread to more than a dozen countries. Last week, the U.S. Centers for Disease Control and Prevention warned that pregnant women should avoid travel to countries where the virus is prevalent, including Brazil.

To get a handle on the situation, Brazil is now funding research into a vaccine for Zika. It's sent the army into certain cities to provide manpower to eradicate the mosquito that carries the virus. It's also using drones to track down standing water where the mosquito breeds.

"This has changed my life completely. After Arthur was born with this condition, I've learned to value what people have inside them, the things that matter. I also now understand and have experienced firsthand the government's negligence. I wish I could help all those other mothers out there who are so abandoned," she says, crying.

In Natal, cases of Zika-related microcephaly are treated at the Januário Cicco Maternity Hospital. It's a grand green-and-white building, built in the 1930s, with echoing corridors.

Dr. Nívea Arraes, a neonatal pediatrician at the hospital, currently has 17 infants with microcephaly under her direct care.

"These are children who might never be able to talk," she tells me. "Or walk. They can be deaf and blind. The challenge is rehabilitation; they need a lot of attention."

Many will require constant care and will never be able to live an independent life.

Arraes acknowledges that the Brazilian health system isn't equipped to give that kind of attention on these cases.

"We are seeing a huge demand, but we have to deal with microcephalic children as well as all the other high-risk cases. The health services need to be reorganized to deal with it," she says.

She says they need more physical therapists, specialized pediatricians — the list goes on.

"The families come here very anxious for help and for answers," she says. "To have to tell these mothers that they have to do it all themselves because we don't have the capacity to help them is so sad."

I took these concerns to the state health secretary of Rio Grande do Norte state, where Natal is located.

Dr. Ricardo Lagreca seemed surprised that the health system was overwhelmed in his state.

"If the mothers and their microcephalic infants go to their local government health clinic, they will get the help they need," he says.

When pressed, he added that the situation took them by surprise. He tells me so far there have been no extra funds disbursed to deal with the microcephalic infants. He hopes that will change soon.

Back at her apartment, Lima says she will continue to fight for her son.

"I never saw myself as strong," she says. "But I have no choice now. I will keep going. That's all I can do. Keep moving forward." She still had baby Arthur in her arms as the tears rolled down her face.