Accessibility links
Tony Elumelu Gives $100 Million To African Entrepreneurs, Hoping Startups Will Create Lots Of Jobs : Goats and Soda Tony Elumelu made his fortune off banking and real estate. Now he wants to spread the wealth and create jobs by investing in African startups. 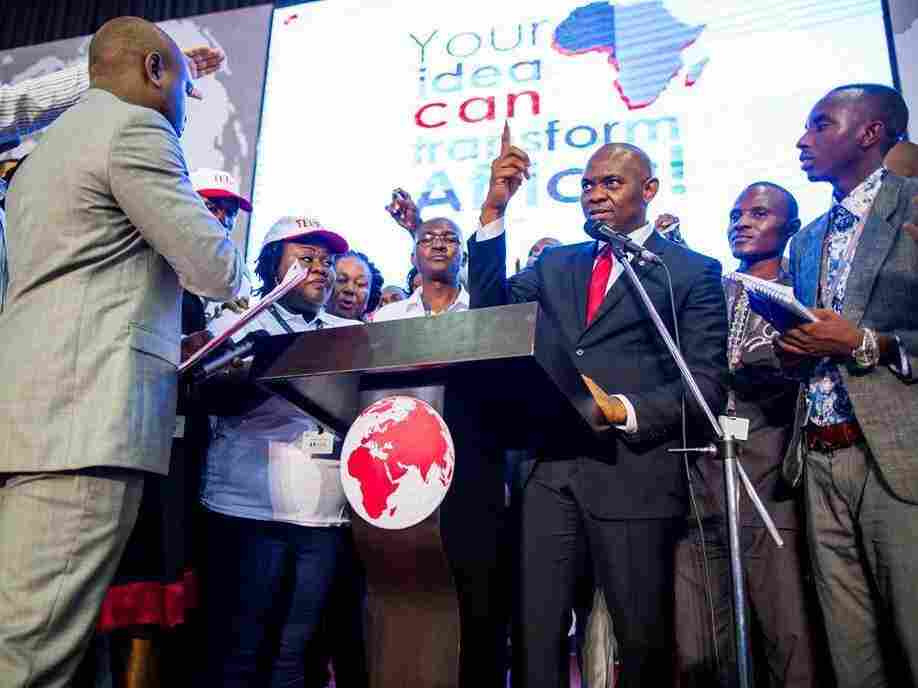 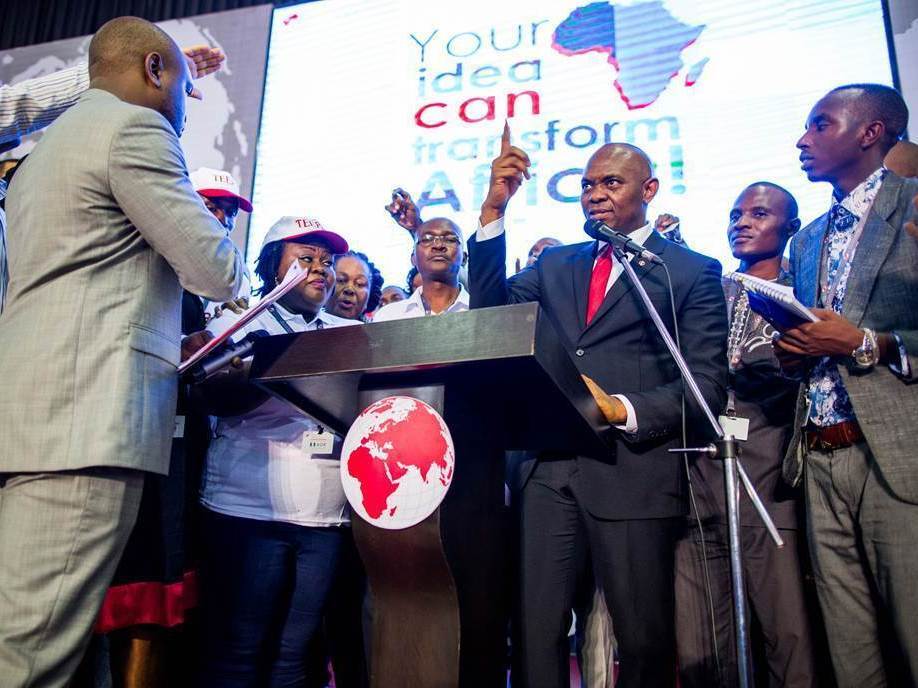 It's 5 a.m. in Lagos, Nigeria, and the Igwe twins are chopping and sweating in the kitchen. The generator is running because there's no electricity. It's hot. But the 27-year-olds, who run a catering service called Speed Meals, don't mind.

"For me it's fun. Really, I don't even feel the heat," says Tobias Igwe.

Tobias and Titus Igwe have huge hopes for their small business.

A million people a day? Right now, it's more like a hundred.

On this day, they're catering a beach party. They load nearly 100 pounds of spicy chicken into their van and head off.

"This is the part that we love most," says Titus. "Mouths are hungry. Let's go feed them!

The twins have come a long way. When they were around 21 or 22, their father died suddenly. They had to drop out of school to support their family. So they started a catering business with no capital. But then help came in the form of an angel investor: the Nigerian billionaire Tony Elumelu.

Elumelu became one of Africa's richest men thanks to banking and real estate investments. He owns conglomerates, hotels and hospitals. The office where I interviewed him was beautiful and modern, with walls made almost entirely of glass and a lush garden viewable from nearly every corner.

Now he has his eye on his legacy — and on lifting Africans out of poverty, despair and hopelessness. He thinks government aid is ineffective and unsustainable. His solution is private investment.

"I consider myself a comfortable African business leader," says Elumelu. "But I'm not just content in [how much money] I'm keeping for my children. I'm also trying to see that [my money] is being spread. We need to have a Marshall Plan to address unemployment."

A Marshall Plan to address unemployment? Nigeria is Africa's richest country because of oil, but the economy is not diversified and unemployment is high — roughly 35 percent. Elumelu hopes to create thousands of small businesses that would hire people, who would then start their own businesses and hire even more people — like a chain reaction.

"These 10,000 entrepreneurs should help create employment and make sure that prosperity and economic growth touches almost everyone," he says.

Touching almost everyone, in Elumelu's mind, would even help fight Boko Haram, the militant group that recruits young suicide bombers.

"What is important both in society and business is hope," he says. "A people who have hope for a better tomorrow will not kill themselves today."

Elumelu's $100 million investment plan funds hundreds of young entrepreneurs in Nigeria's north and northeast, where Boko Haram is based, and hundreds more across some of Africa's most dangerous areas, including publishing and oil recycling businesses in the northern Nigerian city of Kano and a low cost air freighter in Mali.

He often says that poverty anywhere is a threat everywhere. Reducing that threat might just begin with an a few young entrepreneurs ... and a lot of spicy chicken.