Accessibility links
The Zika Outbreak Could Lead To Debate Over Anti-Abortion Laws In Some Latin American Countries : Goats and Soda In 1965, the U.S. faced an epidemic of German measles that, like the Zika outbreak, was linked to birth defects. It changed the way this country talked about abortion. 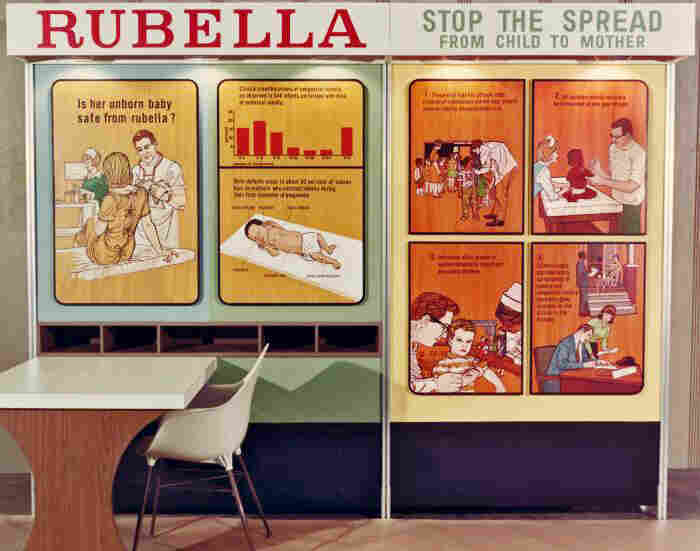 In the 1960s, posters gave advice to the public on the risk of a pregnant mother transmitting rubella to the fetus. Centers for Disease Control and Prevention hide caption 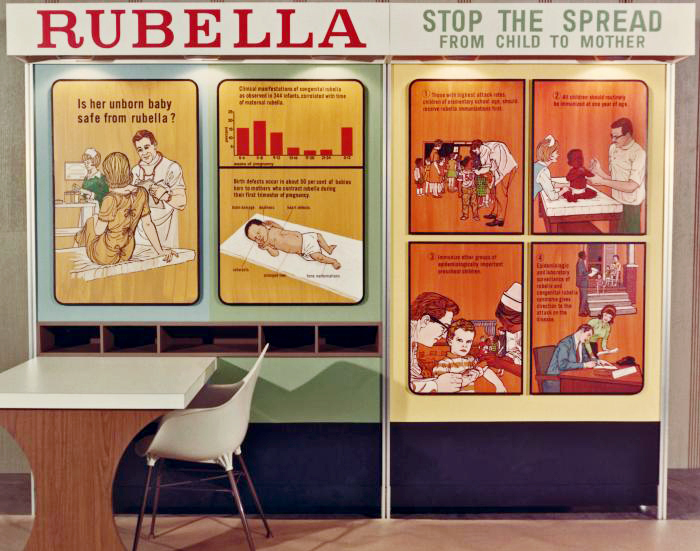 In the 1960s, posters gave advice to the public on the risk of a pregnant mother transmitting rubella to the fetus.

There is a joke circulating in San Salvador these days: "Instead of using a condom, use a mosquito net! That should at least keep the mosquitoes from biting your privates."

The joke is a dig at the unusual suggestion made by the governments of El Salvador and various other Latin American countries. Brazil, Colombia and Ecuador (as well as Jamaica) have advised that women hold off on getting pregnant. El Salvador went as far as to urge women to hold back on having children until 2018.

The suggestion, which might be unprecedented in human history, is in response to the outbreak of Zika, a mosquito-borne virus associated with serious brain damage in newborns. The virus came to the Americas in 2015, hitting Brazil first, and has so far spread to more than 20 countries in the Americas.

Reproductive rights activists are outraged that the Salvadoran government would make this recommendation in country where women have no legal options to terminate a pregnancy if they are concerned about birth defects. That's because the law recognizes a fetus as a human being from the moment of conception.

At Ilopango prison for women, there are 17 inmates who said they had miscarriages but were accused by the courts of having abortions. They were sentenced for up to 40 years for aggravated homicide.

Salvadoran law "criminalizes abortion on all grounds, including when the mother's life or health is in danger, and in cases of rape," wrote Erika Guevara Rosas, Americas director at Amnesty International, in a New York Times op-ed. "Women and girls cannot access an abortion even if continuing their pregnancy will kill them, or if their fetuses are not viable."

It's a position not limited to El Salvador. The Honduran Supreme Court prohibits abortion and the morning-after pill. Guatemalan law allows abortions only if the mother's health is at risk but not in cases of rape.

The matter is raised every so often in Salvadoran media. But Zika might be a watershed moment in how reproductive rights are perceived in the country — and the entire region.

It would not be the first time a viral epidemic changes a society's feelings on abortion. In the 1960s, abortion was illegal in the United States. But an outbreak of rubella (commonly known as German measles or three-day measles) brought the issue of abortion up for public debate. As a result of the national conversations, more Americans came to empathize with those mothers who had an illicit abortion. That was nearly a decade before Roe v. Wade ushered in the era of legal abortions.

Rubella was linked to congenital rubella syndrome in fetuses, which causes deafness, sight problems, heart problems and microcephaly, to name a few medical issues. The severity of the effects of rubella virus on the fetus depends largely on the time when the fetus is infected: Eighty-five percent of fetuses infected in the first trimester of pregnancy were likely to be affected.

And that's where the story of Dolores Stonebreaker comes in. In 1965, she was happy to learn that she was pregnant. Then she found out she had contracted rubella from her 12-year-old son. She was told there was a 50-50 chance that her baby would be born with congenital rubella syndrome.

Even though abortion was against U.S. law, illicit abortions were practiced at the time. And according to the CDC, cases of rubella "result[ed] in 11,250 therapeutic or spontaneous abortions." (A therapeutic abortion is generally one in which the mother's health is in danger.)

William G. Stonebreaker urged his wife to terminate the pregnancy. Dolores, who unlike her husband was a Roman Catholic, approached her priest, who told her in no uncertain terms not to do it.

She was torn. And she made an unusual decision: She went public with her dilemma, allowing a reporter for Life magazine to tell the story of how she chose to abort.

"We learned that reputable hospitals on the West Coast were performing therapeutic abortions on mothers who had been infected," wrote the editor of Life. Reporter Bob Liang and photographer Co Rentmeeser were assigned to interview Dolores.

There was a race and class component to the abortion debate. Professor Leslie J. Reagan, the author of Dangerous Pregnancies: Mothers, Disabilities, And Abortion in America, has studied the history of how epidemics shape the way we see birth control. She says the women who were talking about having abortions were white and stood for the "middle-class, married mother who is speaking about an unborn child she wants to have, but has discovered she had German measles. It's the definition of respectability in that time period, a middle-class mother. Who talks about why she has to have an abortion."

And clearly, Americans were ready to talk about abortion.

Mrs. Robert Raffaele, from Michigan, wrote to Life magazine to say "the truly courageous ones are those who choose to accept their child as it may be." One Barbara Sesputowski wrote in from New Jersey: "As a Catholic mother with two birth-defective children, I certainly understand how Mrs. Stonebreaker feels. I believe she did what she had to do and did not commit a sin in God's eyes."

Others were not so sure. Walter L. Harrison from Delaware wrote "issues such as this have been hidden in hush-hush privacy too long."

In 1967, the Therapeutic Abortion Act made California one of the first states to legalize abortion. The procedure could only be performed in a hospital, after a committee had determined that the pregnancy would put a woman's health at risk.

Much like the U.S. when Stonebreaker faced her dilemma, El Salvador sees plenty of illegal abortions.

Salvadoran abortion rights activist Ángela Rivas warns that Zika will lead to "more clandestine abortions and a higher number of women being sent to jail." Rivas think now is the moment to talk: "Once more we must debate the issue of decriminalizing abortion," she urges. Many others disagree, but it seems as if there will be a reckoning.

If it happens, it could be because of a mosquito.