Accessibility links
How Many Zika Cases Are There In Venezuela: 4,000 Or 400,000? : Goats and Soda It depends on whom you ask. But Venezuela could be the next ground zero for Zika. And government information is in short supply. So are doctors, medicines and even mosquito repellent. 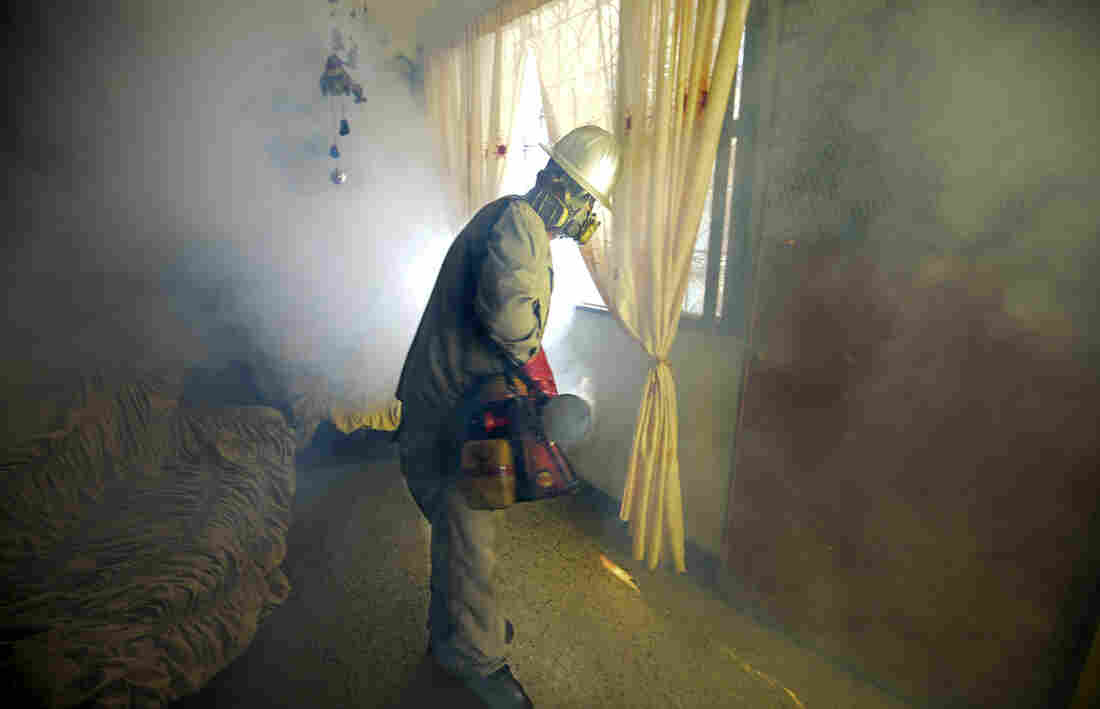 A Health Ministry employee fumigates against the Aedes aegypti mosquito, which can carry the Zika virus, at a home in Caracas, Venezuela, on Jan. 28. Juan Barreto /AFP/Getty Images hide caption 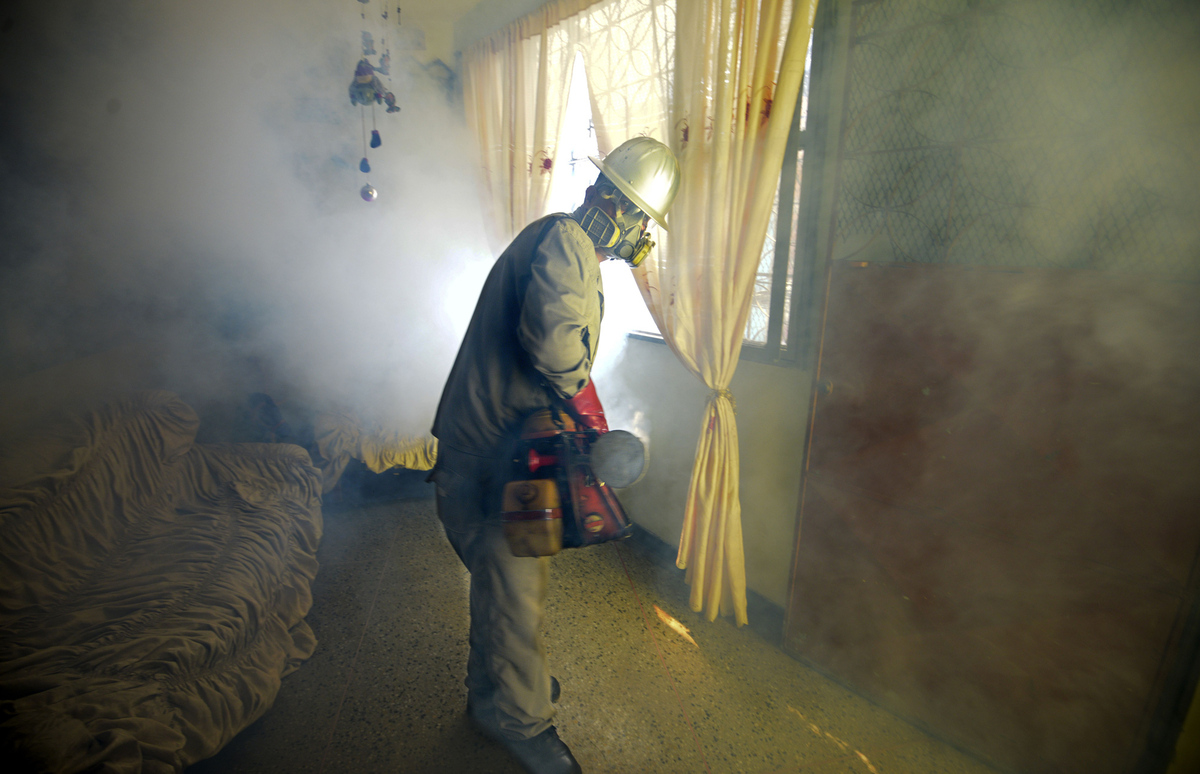 A Health Ministry employee fumigates against the Aedes aegypti mosquito, which can carry the Zika virus, at a home in Caracas, Venezuela, on Jan. 28.

The current Zika outbreak got its start in Brazil, and that country is still the epicenter of the outbreak. But could the situation in neighboring Venezuela be nearly as bad?

That's the charge being made by some doctors' groups, who claim the Venezuelan government is vastly underestimating the number of cases. The government estimates that around 3,700 people have likely been infected with Zika since the outbreak began last year.

These doctors believe the number is closer to 400,000 — and that estimate only covers people who showed symptoms of infection. Since Zika cases are generally mild and often free of any symptoms, the group says the true number of infections to date could be up to 1 million.

Zika Virus 101: What We Know, What We're Trying To Find Out

"The government has been completely opaque on this. They are keeping information from both the public and from the professionals," says Dr. Jose Oletta, who was a minister of health in Venezuela before current President Nicolas Maduro's political party — then led by the late Hugo Chavez — took power in 1999.

Even before the Zika outbreak, the Maduro administration had been criticized for lack of transparency on public health. Among the complaints: More than a year ago it ceased publishing weekly epidemiological bulletins reporting infection rates for a range of diseases including malaria, dengue and chikungunya.

Oletta says the government's communication strategy on Zika is just the latest example of this pattern. While the virus may have been circulating in Venezuela since at least this past summer, authorities apparently only confirmed transmission of Zika in their country in late November. But Oletta notes that rather than announcing this publicly, officials first sent word to the World Health Organization.

It wasn't until Dec. 3, through an announcement by the WHO, that Venezuelans were informed that the virus was in their midst. And for weeks thereafter the government declined to release any estimates of the number of potential cases.

In the absence of official statistics, a private association of prominent public health professionals to which Oletta belongs — called the Network to Defend National Epidemiology — started doing its own research and statistical modeling. They came up with their estimate of about 400,000 cases and released it late last month.

Among other data, says Oletta, "we looked at the number of reported cases of acute fever that health workers did not believe were explained by other diseases, such as dengue and chikungunya." Oletta's group then compared that number against the typical number of unexplained acute fever cases in any given year. The excess case load was counted as potential Zika infections.

Oletta says all this data came from official health reports that aren't being made public. How did Oletta's group obtain the reports? He gets a little coy.

"Look, just like for a journalist protecting your confidential sources is a fundamental principle of the profession, I have to protect my sources. It's an issue of people's security," he says. "But these are the official technical reports directly from the ministry of health. We have chosen to make them public because they shouldn't be kept private. This information belongs to the public. It's in the public interest to make it available."

The government did little to mollify its critics, when, last week it finally unveiled its own estimate of potential cases and put the number at as many as 4,700.

"That's almost 100 times lower than our estimate," says Oletta. "It's like there are two parallel realities in Venezuela right now. The made-up one and the actual situation. It's absurd. It's not possible to have this set-up in a civilized society."

The prospect of a massive upswell in cases in Venezuela is troubling because Zika has been linked to serious complications in the country that has so far seen the largest number of reported cases: Brazil. Based on the experience there, researchers believe that pregnant women who get the disease may give birth to babies with microcephaly, a birth defect characterized by abnormally small heads and brain damage. So far no such cases have been reported in Venezuela. But officials said there are as many as 255 patients with another problem possibly linked to Zika: Guilliam-Barre syndrome, a type of paralysis that can be life-threatening without expensive treatment.

To make matters worse, all this comes as Venezuela is in the grips of an economic crisis that has created shortages of everything from toilet paper to deodorant — let alone sophisticated medicines.

Huniades Urbina, a pediatrician at the J.M. De Los Rios Hospitals in Caracas — one of the country's main children's hospitals — says even basic painkillers like paracetamol (a common brand in the United States is Tylenol) are hard to come by.

"The same way there are long lines to buy food, there are incredible lines to buy medicine. People have to go to four or five pharmacies to find the most basic items."

In the last several years there has also been an exodus of thousands of doctors, leaving medical centers chronically understaffed and intensive care units short of beds.

And when it comes to Zika, Urbina describes an atmosphere of desperation among his patients.

Mothers are asking how to prevent infection with the mosquito-borne Zika virus, he notes. "And the answer is, 'Don't keep standing water around your house [in which mosquitoes could breed]. Well, there's a massive water shortage across the country. In a lot of places you can only get water every week or two weeks," says Urbina, who is president of the Venezuelan Society of Childcare and Pediatrics. "So of course everyone is keeping buckets of water in their homes."

Or he says, "people are told, 'use mosquito repellent.' But there's no mosquito repellent in the stores. It appears one day and the next it's gone. You hear of people trying to get it sent to them by relatives in Miami."

Although the government has launched a nationwide campaign to spray against mosquitoes, Urbina says what he's seen appears to be too little too late.

To make do, says Urbina, people are resorting to dubious home remedies. "There's this idea that if you spread coffee grounds on the dirt it will suppress mosquitoes — so people are trying that."

As a doctor, he says, "you feel so much frustration. It's like we've reverted to the 19th century."