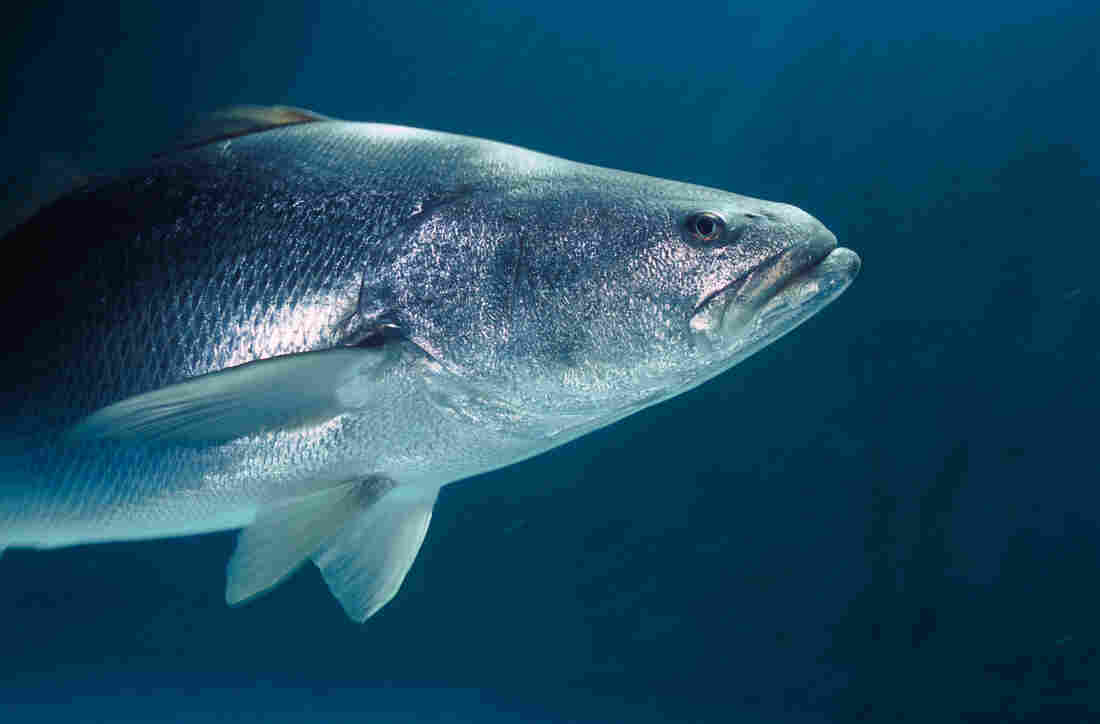 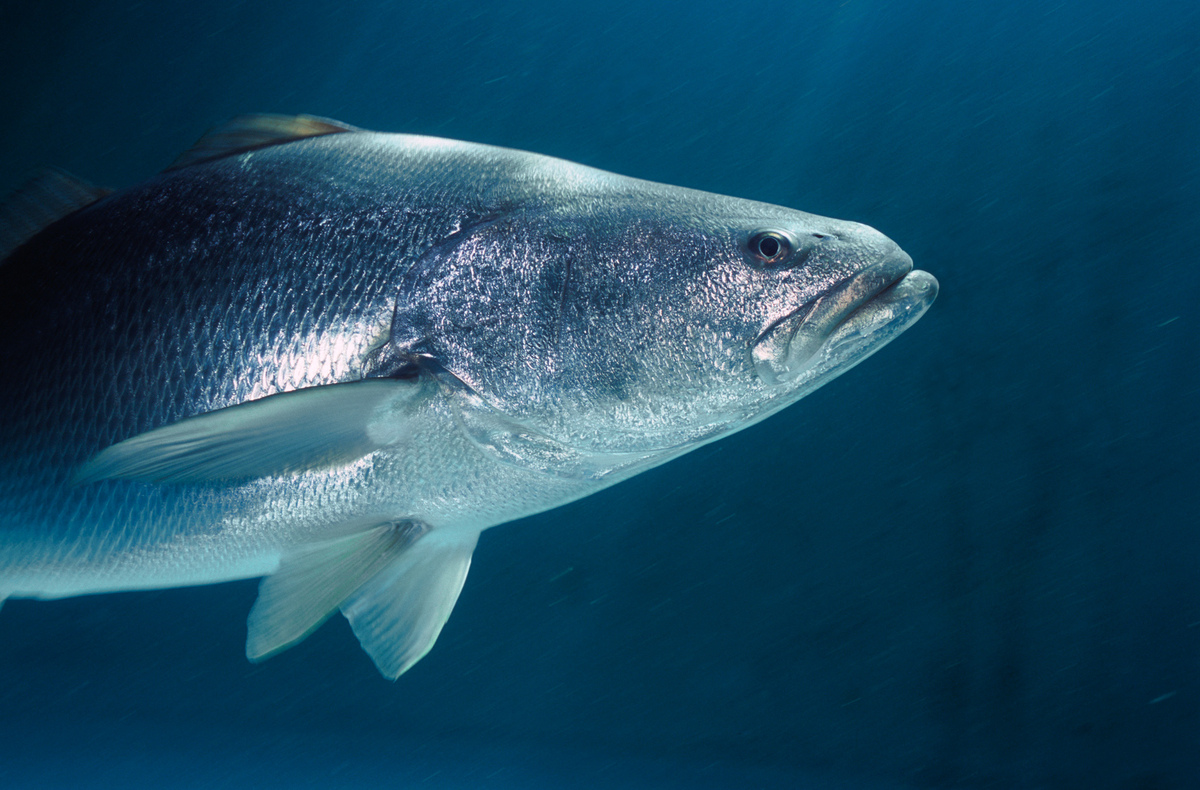 The totoaba is prized for its large bladder.

The international trade in exotic animal parts includes rhino horn, seahorses and bear gallbladders. But perhaps none is as strange as the swim bladder from a giant Mexican fish called the totoaba.

The totoaba can grow to the size of a football player. It lives only in the Gulf of California in Mexico, along with the world's rarest marine mammal — an endangered porpoise called the vaquita.

Now the new and lucrative bladder trade threatens to wipe out both animals.

"People in Asian cultures use the swim bladder in a soup called fish maw," explains Erin Dean at the U.S. Fish & Wildlife Service. It's also reputed to have some medicinal value — it's thought to boost fertility.

Dean says no one knows why the demand for it has skyrocketed recently. It could be that when a Chinese fish called a yellow croaker, which once supplied bladders, started dying out, people started turning to the Mexican totoaba to meet the demand for bladders. 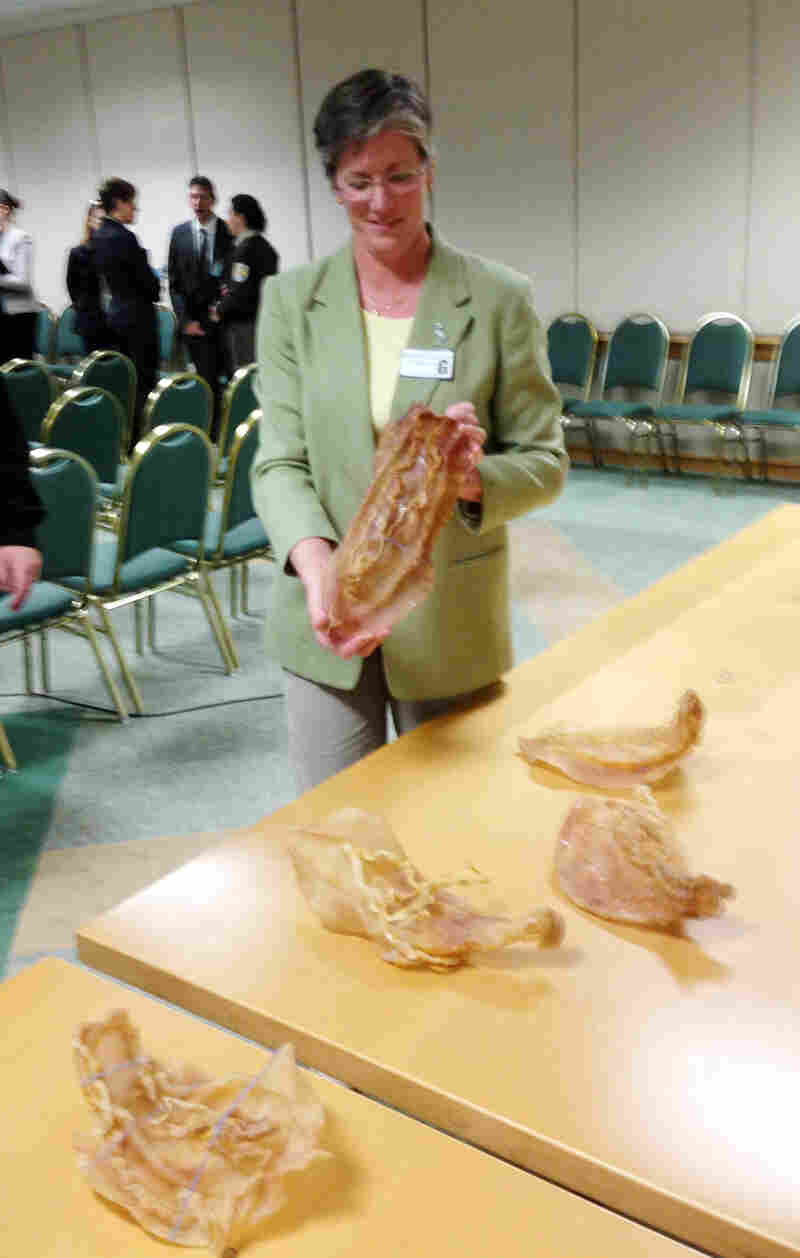 A scientist for the U.S. Fish and Wildlife Service shows a dried totoaba bladder at a news conference in 2013. Elliot Spagat/AP hide caption 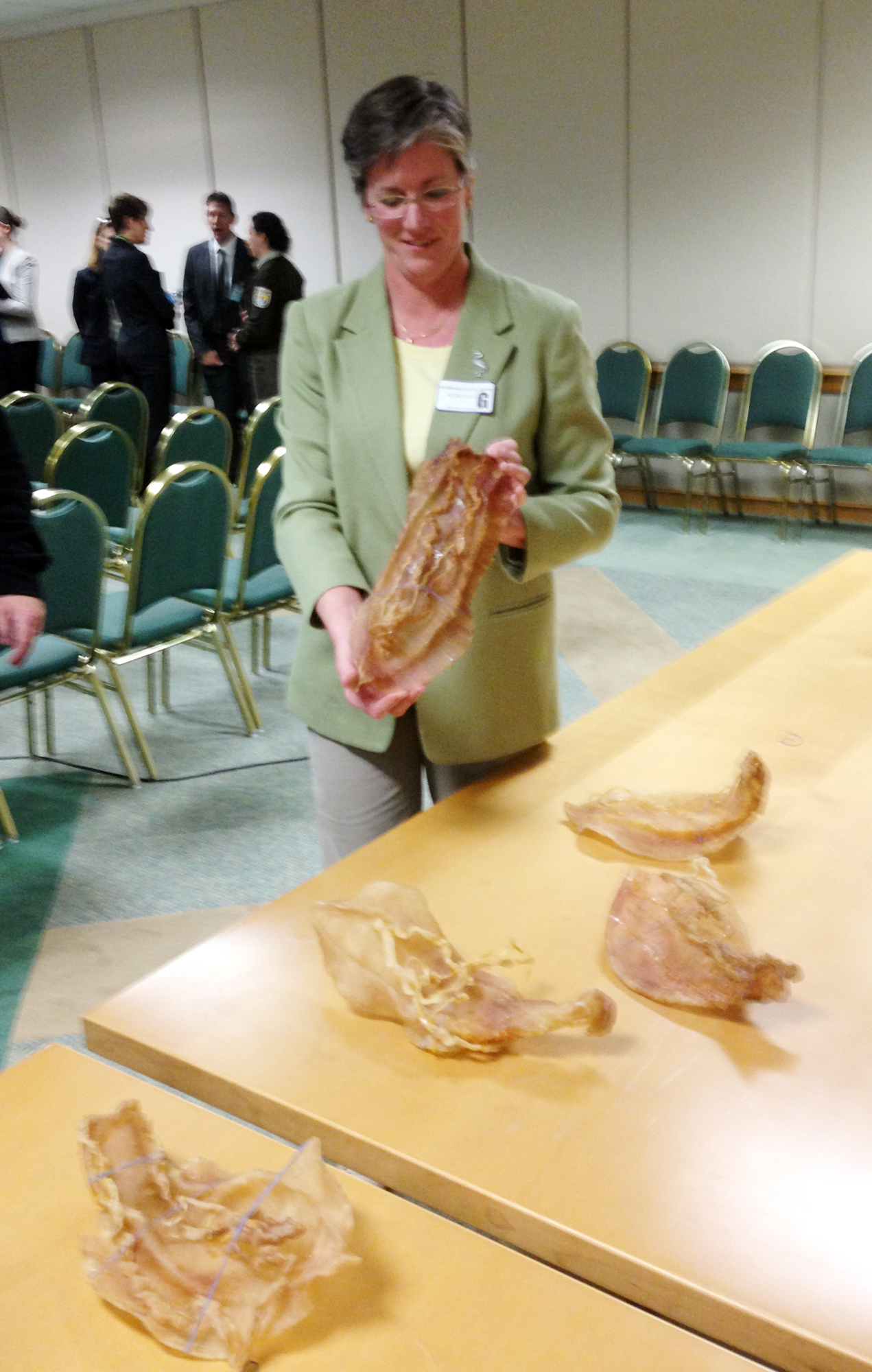 A scientist for the U.S. Fish and Wildlife Service shows a dried totoaba bladder at a news conference in 2013.

And the totoaba has one big bladder, which it inflates and deflates to control its flotation. When dried, it's about the size of a laptop computer — and it sells for big bucks.

"When one totoaba fish bladder goes for $10,000 in the Chinese market," says Dean, "law enforcement agencies kind of raise up their eyebrows and take note of this trade going on."

What investigators found is that Mexican fishermen are using huge nets, called gill nets, to catch totoaba. And those nets also accidentally snare and kill the vaquita porpoises. Their corpses get thrown away, while the totoaba bladders go to China. The whole business is a violation of both Mexican and international law, since the totoaba and the vaquita are listed by international treaty as endangered, so they're legally protected.

Fish and Wildlife Service agents are finding that the bladders often make their way to China via California. They found their first illegal bladder in a car coming across the Mexican border in 2013 — an astute agent had heard of the trade and recognized the bladder.

Later that year, agents seized another fish bladder from under the floor mats of another car at the border. They let the driver go but followed him. Dean says when agents raided his house, the scene inside was crazy. No furniture — just bladders. Everywhere.

"There were totoaba swim bladders placed all throughout the house," Dean says. "Giant fans blowing to dry out the bladders." Altogether, the 214 bladders that agents found in that house were worth $3.6 million.

Federal agents fear that with that kind of money at stake, the trade will get even bigger. "We absolutely have heard that cartels are involved in this trade," says Dean. "We've yet to nail that down."

Seven people have been prosecuted so far, she says. But fines and jail sentences issued so far have been relatively light.

Meanwhile, as more totoaba die for soup, more of the vaquita die with them. There are now only about 100 of these porpoises left on Earth, according Leigh Henry, a conservation policy adviser at the World Wildlife Fund. "It's the most endangered marine mammal," she says. "They are beautiful animals. They look like they have lipstick on and mascara."

The only place they're found is in the Gulf of California. Years ago, Mexico tried to protect the vaquita by putting large parts of its range off limits to fishing with gill nets. And the vaquita's numbers rebounded. Things were looking hopeful — until the totoaba trade took off.

Last month, this became an international issue. Government officials from the U.S., Mexico and China met in Geneva to talk about wildlife trade. It was the first time a lot of people had heard much about this new trade, says Laura Noguchi from the Fish and Wildlife Service, who was there. Mexican officials said China had a responsibility to track down bladder buyers. China said Mexico should crack down harder on illegal fishing.

Noguchi says the Chinese do appear to be taking the trade more seriously now. "They have looked at some of their dried seafood markets in Hong Kong," she says. "That's a hub apparently for the sale of this swim bladder."

But Chinese officials say they've yet to see much of a totoaba market in China. They also noted in a letter to officials who monitor wildlife trade under the Convention on International Trade in Endangered Species that it's hard to tell what's totoaba bladder and what might come from other, non-endangered fish.

Historically, fighting international wildlife trade takes a long time. And Leigh Henry of the WWF says that's especially true when it involves an animal that most people don't know about. "I want my kids to live in a world where vaquita continue to exist," she says. "My girls are 9 and 6. And they're probably two of the only people in the United States who know what a vaquita is. And they're concerned."

So is she. She says without an end to the trade, the vaquita could disappear by 2020.

A previous Web version of this story incorrectly said the porpoise called the vaquita is the world's smallest mammal. In fact, it is the smallest in the cetacean family of marine mammals, which includes whales, dolphins and porpoises.