Accessibility links
U.N. Call For An End To Female Genital Mutilation Leads To New Rituals With Milk, Honey And Sex Ed : Goats and Soda The chief of the U.N. has called for a better way to mark the coming-of-age of girls. Some communities are paving the way with a new kind of ritual. 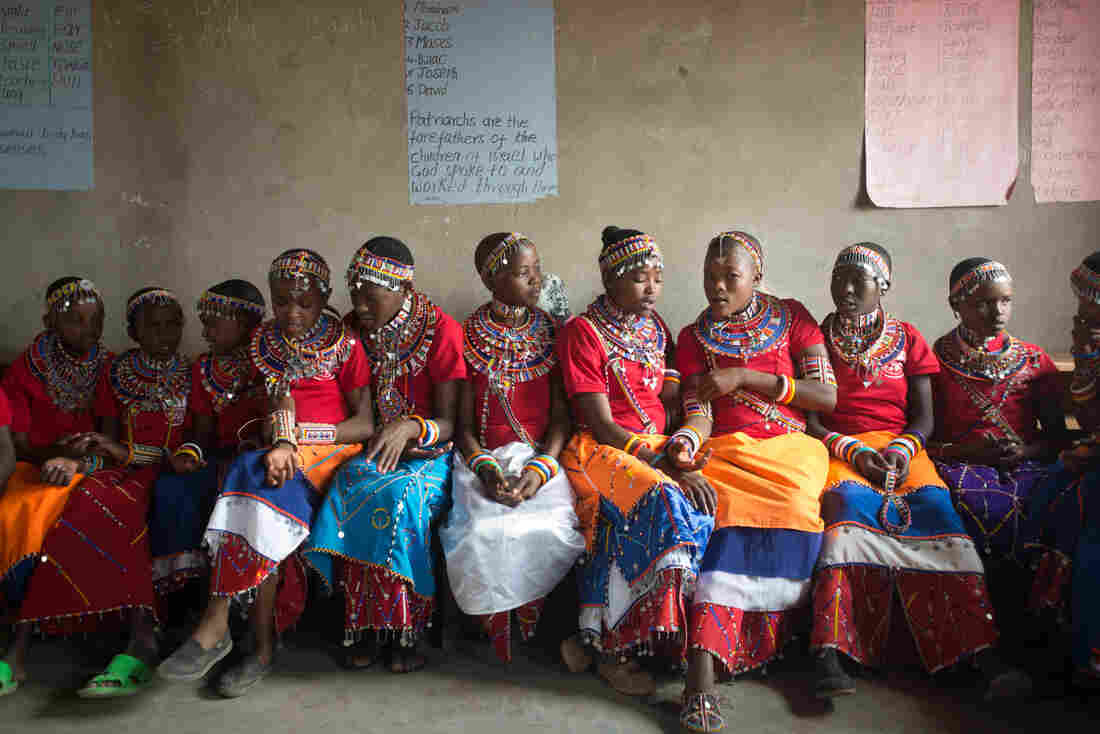 As part of an alternative rite of passage, these Maasai girls wear beaded jewelry given to them by their mothers. Rebecca Sell hide caption 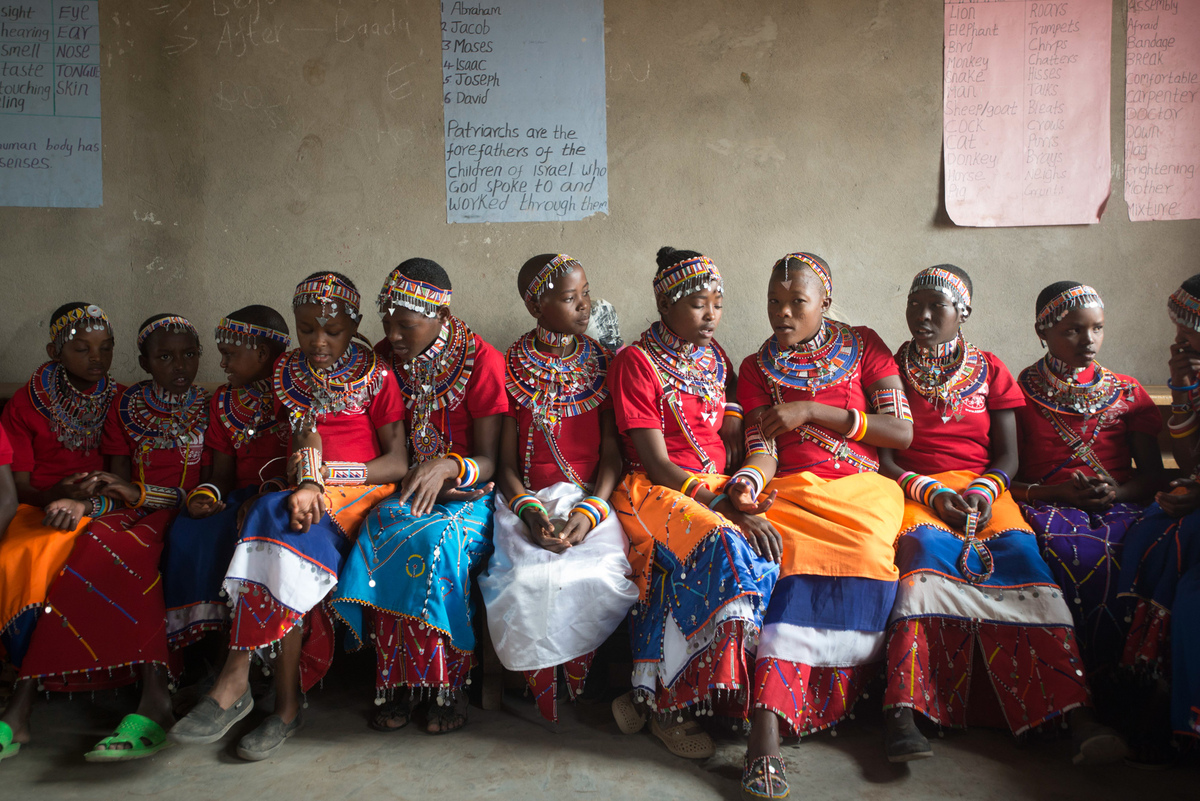 As part of an alternative rite of passage, these Maasai girls wear beaded jewelry given to them by their mothers.

At age 9, Nice Nailantei Leng'ete ran away from home so she wouldn't have her genitalia cut as part of a coming­-of-­age ceremony.

For her defiance, she was shunned by family and community.

That was 16 years ago. The ritual cutting away of part or all of the external female genitalia continues in force around the world. A new UNICEF report estimates that at least 200 million women alive today have undergone what's known as female genital mutilation (FGM).

UNICEF Estimate Of Female Genital Mutilation Up By 70 Million Feb. 8, 2016

But now there's a concerted effort to convince communities that Nice Nailantei Leng'ete was right — and that there's a way to mark a girl's maturity without cutting. On Feb. 7, International Day of Zero Tolerance for Female Genital Mutilation, Ban Ki­-moon, chief of the United Nations, called for "a better way" than the ritual cutting away of part or all of the external female genitalia. The U.N. has described the practice as "violent" and a violation of the rights of girls and women.

Still, resistance remains in some cultures and communities. This week, two American gynecologists published an article in the British Journal of Medical Ethics, proposing a "compromise solution" that would permit minimal female genital "nicks" that would "accommodate cultural beliefs while protecting the physical health of girls, but would proscribe those forms of FGA that are dangerous or that produce significant sexual or reproductive dysfunction."

Are such nicks "a better way"?

Dr. Githinji Gitahi doesn't believe so. He's a physician with a specialty in OB­-GYN and a leader in the group Amref Health Africa. "It's important to understand that FGM has no medical benefits and as such, to advocate for any form of it is to miss the point," he wrote in an e­mail. "FGM is a harmful practice which results in numerous medical complications including severe bleedings, infection, blockage of the urinary tract with renal complications and even death and later in life may result in inability to deliver normally."

In fact, some communities are embracing ceremonies that do away with all cutting. 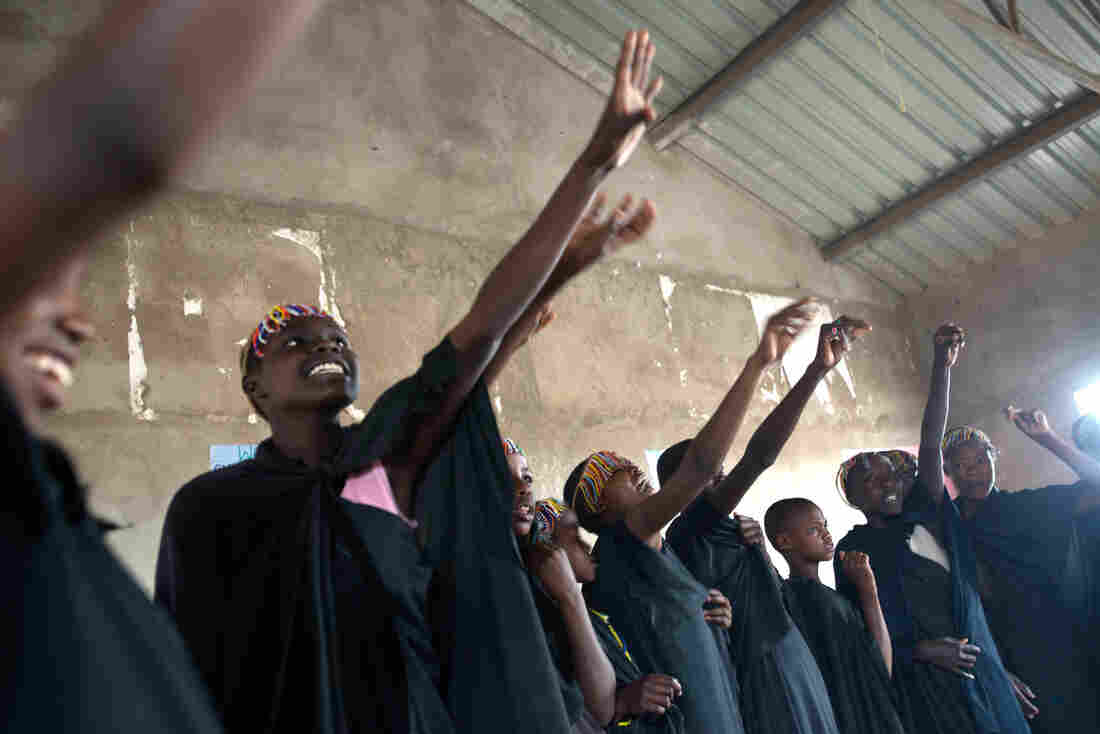 These girls are eager for the start of a coming-of-age ceremony. First they attend classes to learn about their bodies and their rights as women. Then comes the celebration. Rebecca Sell hide caption 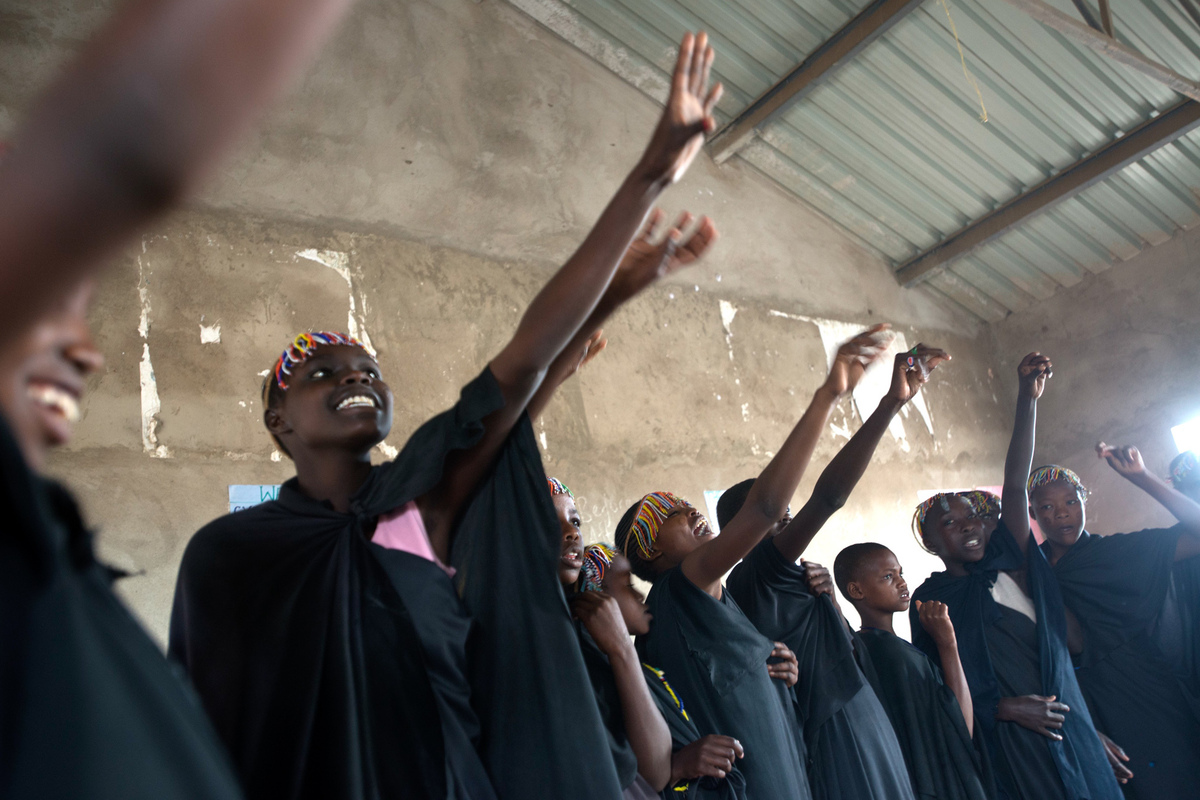 These girls are eager for the start of a coming-of-age ceremony. First they attend classes to learn about their bodies and their rights as women. Then comes the celebration.

The new traditions are taking hold in Maasai and Samburu communities in Kenya and Tanzania. After two or three days of preparatory sessions for the girls, the celebration culminates with communal singing and dancing and blessings by the village elders, who pour a mixture of milk and honey and water over the heads of the girls. Goats and cows are slaughtered for specially prepared stews or roasts. Traditional beer is brewed for the men to drink. The young women don multi­colored clothing and decorative beads that dangle from their heads and hang around their necks.

Such ceremonies have included from 200 to more than 1,000 girls, says, Peter N. Nguura, project manager, of Unite for Body Rights Project, AMREF Kenya Country Office, with several communities often coming together for the celebration. Usually, the elders also make a public declaration abandoning FGM, and the young men will similarly make public assurances that they will marry women who did not undergo FGM. That's important because any girl who refused to be cut was shamed and shunned, subjected to a life of isolation, without marriage or children.

And at the center of the celebration are the girls themselves. During the two to three days preceding the celebration, participating girls in the alternative rites of passage are secluded, in a school dormitory or village hut, where they learn about womanhood: lessons which now include sex education, information about STDs and violence against women, and presentations emphasizing the importance of continuing education for girls' and women's rights. The traditional cutters who had in the past performed the cut also are usually present, discussing their role in the past — and explaining the health reasons for abandoning the practice. "They will say, 'We did this because we believed in it, but now we want to encourage girls to go back to school,' " says Leng'ete.

Women like Leng'ete share their own stories at these ceremonies. Now 25, she became the only girl in her village in KENYA to complete her secondary education. As project manager of AMREF's Scaling Up Alternative Rites of Passage program, she spreads the word that there are alternative rites of passage.

But for such celebrations to succeed as an ongoing alternative to cutting, the entire community must be accepting, says Jacinta Muteshi­-Strachan, project director of the FGM/C (the "c" is for cutting) research program for the Population Council. That means chiefs and elders, fathers and mothers, even the traditional cutters. It can take six months or more of meetings before a community agrees to abandon FGM and accept alternative rites.

Rebecca Sell, a freelance photojournalist and associate professor at Ohio University in Athens, Ohio, was present at an alternative rites of passage celebration in August 2013. It took place in Esititeti, Kenya, located near the foot of Mt. Kilimanjaro, where the Africa Schools of Kenya was helping implement the program. At that time, only about 20 girls participated in the ceremony; now, she says, 200 to 300 girls, including those from neighboring communities, also take part. In one memorable moment, as in a graduation ceremony, the girls stood in line in their finery as their names were called out. Each received a certificate declaring they had completed the alternative rite of passage.

"From the mothers and older women I got to know, there was a lot of self-respect. They are pleased that the community is committing to [ending FGM]," says Sell. "They know that making the change is a big deal for them and their daughters. There is a lot of pride."