Accessibility links
Strained Relations Between Colombia And Venezuela Hamper The Fight Against Zika Virus : Goats and Soda Colombia would like to coordinate with Venezuela to fight the virus. That's not happening. Meanwhile, Venezuelans who cross the border may be bringing Zika with them. 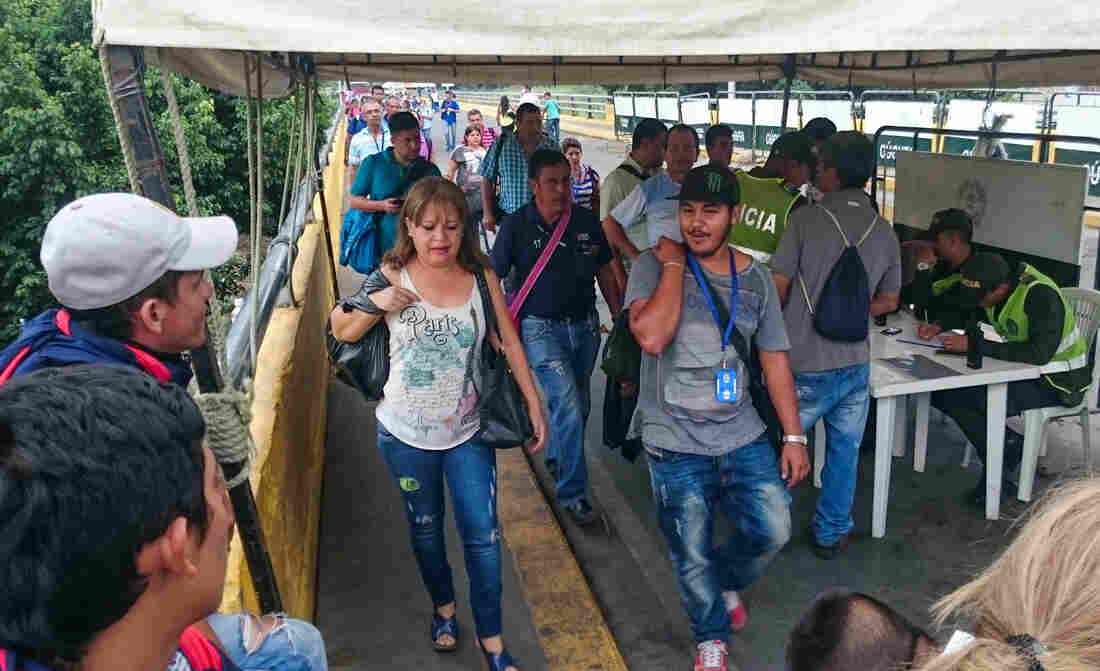 These people have just walked across the bridge from Venezuela to Colombia, where the Colombian immigration authorities are on duty. Many people live on one side and work on the other, crossing so frequently they don't have to register with officials each time. Vladimir Solano for NPR hide caption 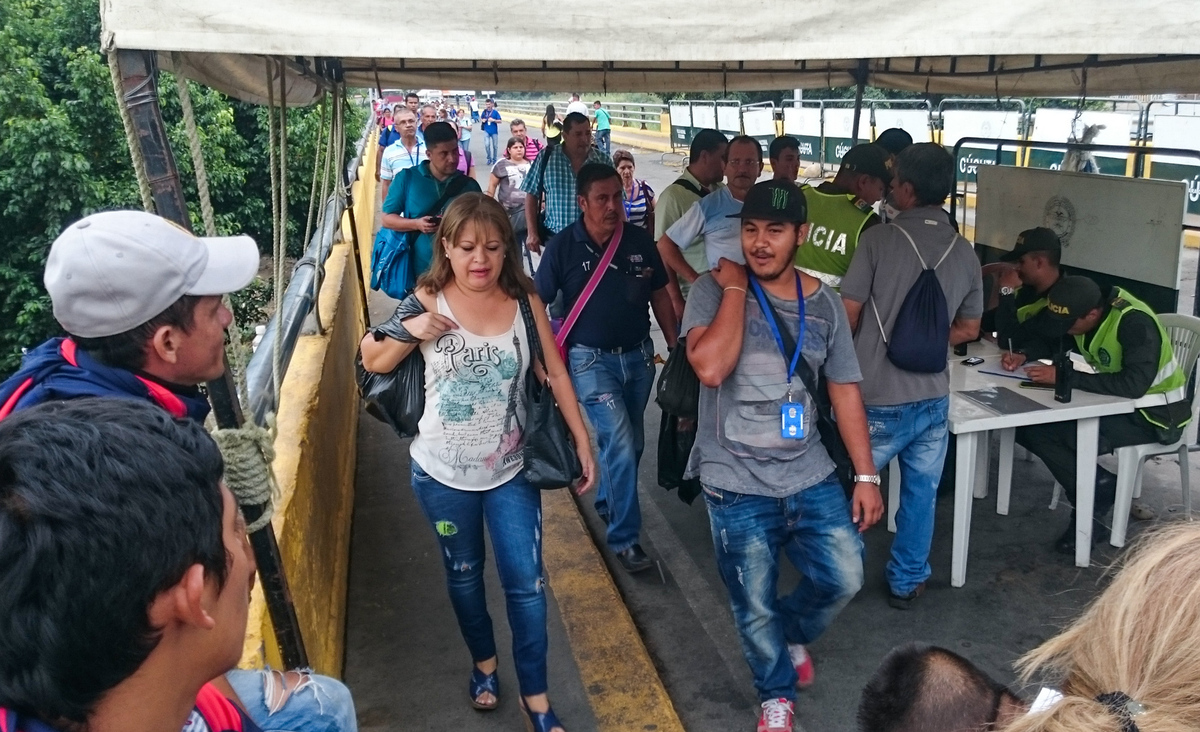 These people have just walked across the bridge from Venezuela to Colombia, where the Colombian immigration authorities are on duty. Many people live on one side and work on the other, crossing so frequently they don't have to register with officials each time.

The Zika outbreak is aggravating an already tense relationship between Venezuela and Colombia. In Colombia, more than 37,000 people have fallen sick. Venezuela reports fewer than 5,000 cases — a number that Colombian officials find suspiciously low.

Juan Bitar heads the health department of a state in Colombia that shares a long border with Venezuela. "A lot of people who are sick with Zika in Venezuela are coming [to Colombia] for medical attention," he says.

A big part of the problem is that Venezuela is in the middle of an economic crisis. Right now, there's a shortage of everything over there.

"And we know that Venezuela is full of Zika right now."

You get a sense of the picture at a busy border crossing between the countries.

It's a bridge over a dry riverbed. We get there in the early evening — rush hour — and the traffic back and forth is impressive.

A guard on the Colombian side lets through a bus carrying school kids on their way home to Venezuela. There's a stream of people walking in the opposite direction into Colombia — old women wheeling suitcases, teenage guys with backpacks.

A young family walks by. Their 2-year-old girl plays hide-and-seek with us from under the canopy of her stroller.

Her mother, Johanna Villamizar, tells me that like many people around here she has dual citizenship.

"My mother is Colombian, my father is Venezuelan," she explains. The family owns an auto parts shop on the Venezuelan side. Villamizar's husband says he works there every day.

"I wake up, cross the border to get to work, then at the end of the day I cross back to come home."

Officially, Venezuela has closed this border to most traffic due to a political dispute. (Venezuela is trying to shift some of the blame for its economic woes onto Colombia. Colombia says that's ridiculous.)

But Venezuela is still letting hundreds of people pass through the bridge every day. Villamizar says for her, it's as if the border doesn't exist.

And the same seems to hold true for the Zika virus. Practically everyone in the Villamizar family has gotten it, on both sides of the border. She ticks off the list: "My grandmother, an aunt, a cousin."

So far, Villamizar has been able to avoid infection, but Zika's got her worried. She's pregnant and she has heard the reports about a possible link between this mosquito-borne virus and birth defects.

"I spend all my time spraying myself with repellent," she says, laughing.

Plenty of other people we meet say they don't bother.

Like Shirley Llanos, a physiotherapist wearing gray scrubs. "Because I'm pretty sure I've already had Zika!" she says, giggling a little sheepishly.

She came down with the classic symptoms in December — rash, fever, aches. Even so, she says, she kept working through most of it — commuting from her home in Venezuela to a hospital on the Colombian side. As she puts it, "A few days here, a few days there."

That's a pattern that worries Colombian officials like Bitar because the mosquitoes that transmit the virus between humans don't actually travel far. This is an epidemic that's being spread by sick people moving from one place to another.

Bitar says the biggest challenge is Venezuela's almost complete denial of the scale of its Zika problem. Ideally, he says, he should be coordinating closely with his Venezuelan counterparts right now — pooling data so they can focus mosquito-fighting efforts on border communities where the virus is spiking.

But relations have become so strained, he says, that he can't even pick up the phone to call them.