Accessibility links
The God Shiva Is Honored At A Festival In Nepal With Bonfires ... And Marijuana : Goats and Soda At a festival celebrating the Hindu god today in Nepal, many of the holy men and women follow in the footsteps of the deity and have a little hashish. 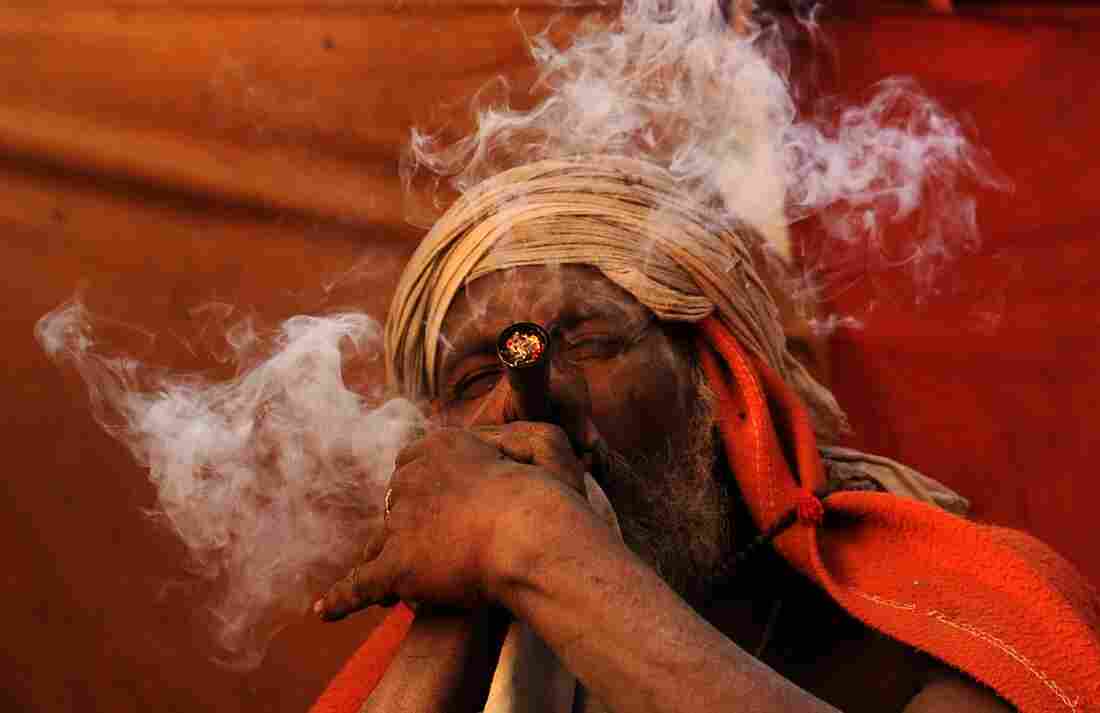 A Hindu holy man in Kathmandu smokes a chillum, a traditional clay pipe, on March 6, the eve of a festival honoring the god Shiva. Prkash Mathema /AFP/Getty Images hide caption 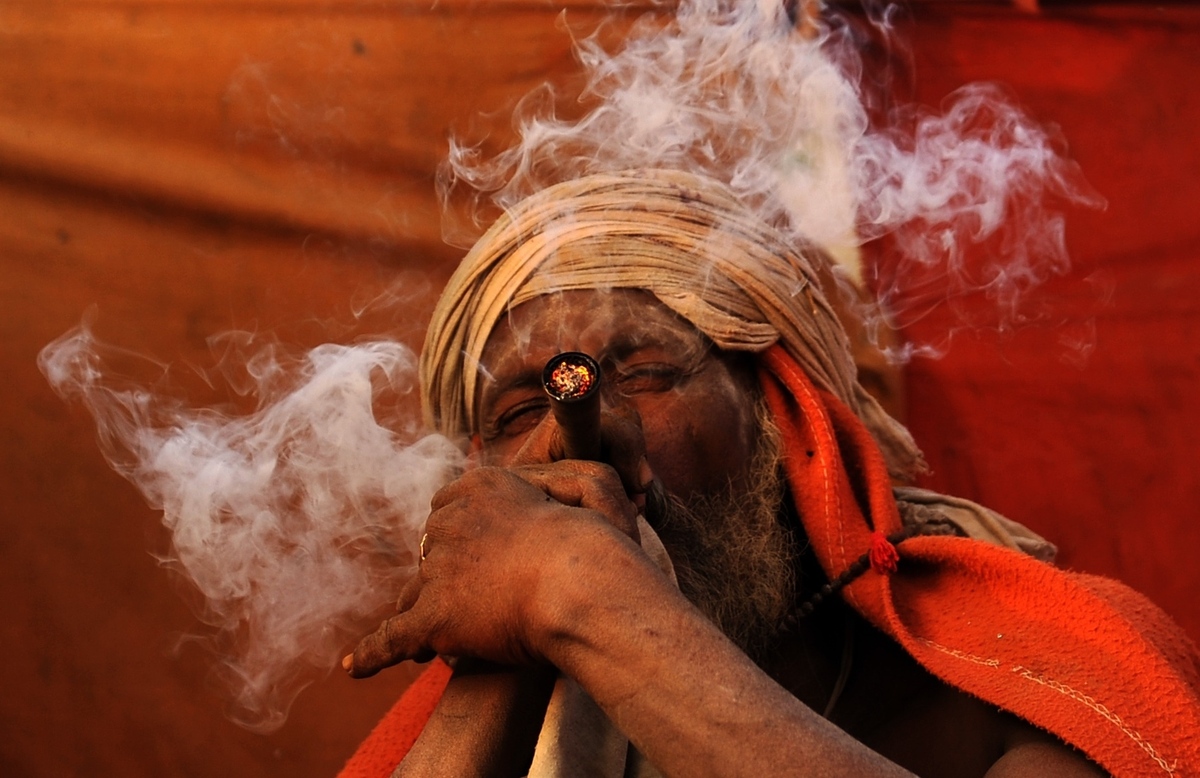 A Hindu holy man in Kathmandu smokes a chillum, a traditional clay pipe, on March 6, the eve of a festival honoring the god Shiva.

Shiva is one chill deity.

He's one of the three major gods in the Hindu religion. And he has a penchant for pot.

"Shiva loves marijuana. So we come to share Shiva's prasad [offerings] with everyone else," explains a 60-year-old holy man who gives his name as Radhe Baba.

It's the eve of the festival of Shiva Ratri, or "The Night of Shiva" — March 7 this year. The celebration marks the day Shiva saved the universe from darkness and married the goddess Parvati.

Groups of dreadlocked Hindu ascetics sit around small smoky fires puffing on clay pipes at Pashupati, one of Nepal's holiest Hindu temples, in the capital city of Kathmandu. Hundreds of holy men (and some women) have traveled from around Nepal and India for the festival. They spend the days before the holiday alternately praying and lounging to prepare to commune with Shiva.

And they also smoke hashish. Marijuana smoke mingles with the bonfires. Both are symbols of religious devotion. Shiva, it's believed, used marijuana both to relax and to focus better for meditation.

It's scenes like this that made Kathmandu famous among hippies. Indeed a few days before Shiva Ratri, Pashupati had the vibe of a relaxed music festival. It's a little more like Bonnaroo by the time over a million devotees have arrived for the big day.

"That [smoking marijuana] makes us forget everything and we communicate with Shiva," 50-year-old Madhan Lal Baba says, sitting next to Radhe.

The two have traveled with a group of holy men from Benares, India, and said that the Indian government even gave them some money to make the trip. As ascetics, they've renounced possessions and survive off stipends from the temples and alms from devotees.

The marijuana helps stave off worldly desires, they say. Sharing the "prasad" – in this case, the weed -- shows their love for Shiva, Madhan Lal explains.

"Baba, do you have prasad?" a visitor asks a seated holy man.

"Sit, smoke, relax," the holy man responds, gesturing to the stone temple steps next to him and packing a conical clay pipe, called a chillum, with hashish. The holy man smears ashes on the visitor's forehead with his thumb as a blessing and offers a puff on the pipe, for which the man hands him some rupees.

Though the temple authorities insist they are cracking down on the drug use, marijuana consumption is considered acceptable on the day of the holiday. "The police don't say anything because it's Shiva Ratri, and we're giving [marijuana] to Shiva followers," Madhan Lal says. But not everyone indulges. Many of the pilgrims simply visit the temple to make offerings and pray.

Devotees also light bonfires to warm Shiva and signify the end of winter. Fire is holy in Hinduism. But touching the fire with unclean things is thought to pollute it. So the holy men cup their hands around the base of their pipes and suck the smoke through. This prevents their lips from polluting it.

"Fire represents God," Ram Das Bairagi explains. "We do [bonfires] for Shiva, to call him. Maybe he will see the fire." Bairagi, an ascetic who lives at Pashupati temple year-round, has wrapped his long dreadlocks in a leopard print scarf, representing the animal skin Shiva wears. His body is white from ashes, taken from the cremation sites at the temple.

"These are ashes of cremated bodies. They represent homeless people, animals, mentally disabled people," says another man who'd spread ashes on his body. He gives his name as Dandi Baba. Wearing the ashes allows these different entities to attend the wedding of Shiva and Parvati, he explains.

According to legend, Shiva Ratri is the night when Shiva married his bride and experienced the beauty of love and pleasure of sex for the first time. Though Shiva is associated with sex and creation, many of his most devout followers remain celibate.

"My life is fully dedicated to Shiva. I have no wife, no family. The first thing I knew was Shiva," says 72-year-old Dandi Baba.

"God is such a mysterious thing, but you have to follow it because it's inside you," he adds. "We don't follow money or day-to-day things. They're not important; you don't need those things. The only thing humans need is to share love with each other and share our culture."

And then he passes the pipe.