Accessibility links
Oxfam's 'Female Food Heroes' Program Helps Turn Farmers Into Leaders : Goats and Soda How fast can you vaccinate a goat? That's one of the challenges in "Female Food Heroes," a contest in Tanzania, Nigeria and Ethiopia.

Carolina Chelele is a contestant on a popular reality TV show. It's not about dating, housewives or survival. It's about ... farming. Specifically, farming by females.

She and her competitors have each been given a bag of mortar and a single seed. The cameras are rolling. Thousands of dollars in prizes are on the line. The producers ask them: How do you plant it?

Some farmers planted the seed directly in the mortar (in case you're not sure what mortar is, it's a mix of sand and cement). Others mixed the mortar with soil or mud. But Chelele, 49, sat back. She didn't touch the stuff.

"This challenge is impossible," she said.

She was correct, of course — you can't plant a seed in mortar. Water would just make it harden and set around the seed, which would have no room to grow.

The show, sponsored by the international charity Oxfam, was created to show Africans just how valuable hard-working, experienced female farmers like Chelele are — even though they're not reaching their full potential.

Women make up 53 percent of Tanzania's small crop producers, but produce, on average, 14 percent fewer crops per acre than plots managed by men, which means they earn less money. This is because they lack access to credit, labor and fertilizer, factors essential to productivity, according to a report from the One Campaign and the World Bank.

Despite the serious subtext, Female Food Heroes takes a lighthearted approach. The farmers compete in all kinds of tasks over a 21-day period: selling goods on the side of the road, repairing mud walls and vaccinating goats. Viewers help determine the winner by voting for their favorite contestants.

Since the TV version of the program, Mama Shujaa wa Chakula, began airing in Tanzania in 2011, the show, in partnership with East Africa TV, has reached about 37 million viewers throughout the region, says Oxfam. And each season, nearly 3,000 female farmers vie for one of the 18 to 20 spots on the TV show.

The idea for the initiative came about after campaigners at a regional Oxfam meeting in Africa decided they needed to change how people were talking about female farmers. "A lot of what we were doing for smallholder women farmers wasn't having an impact," says Eluka Kibona, who manages Oxfam's involvement with the show.

They wanted less of a "pity party" and more of a "celebration that would give them the status they deserve," she adds.

And that's exactly what the program is doing: transforming female African farmers into advocates for agriculture issues.

Chelele, who won Season 5 of Female Food Heroes in Tanzania, has become a community leader. In addition to the grand prize, which included about $10,000, 7 acres of land, and farming and fishing tools, she says in an email to NPR that she has "generated a small amount of fame, which is wonderful."

Now that she's a winner, the mother of four and the sole provider for her household educates family members and other people in her village about different farming methods. A few times a month, she goes on the local radio station. People call in and ask her about her experiences as a farmer and a women's rights advocate. She answers questions like "How do I learn to make manure?" "How did I modernize my farming technique?" and of course, "How do I get on the show?"

Since the television show began in Tanzania, Female Food Heroes competitions and award ceremonies — which Oxfam describes as kind of like a "beauty pageant" — have been held in Ethiopia and Nigeria. But the program, which started in 2012, has its own set of winners, judges and contestants. Unfortunately, it's not aired on TV.

The contestants don't seem to mind — they're just glad they have a chance to win. Monica Maigari, an energetic 59-year-old farmer, was the first-runner-up in Nigeria's 2014 Female Food Heroes challenge. Monica Maigari, a Female Food Heroes contestant from Nigeria, is visiting Washington, D.C., for the first time on a trip sponsored by Oxfam. She says NPR's rooftop garden, where she is pictured, is "great for carrots and tomatoes." Matailong Du/NPR hide caption 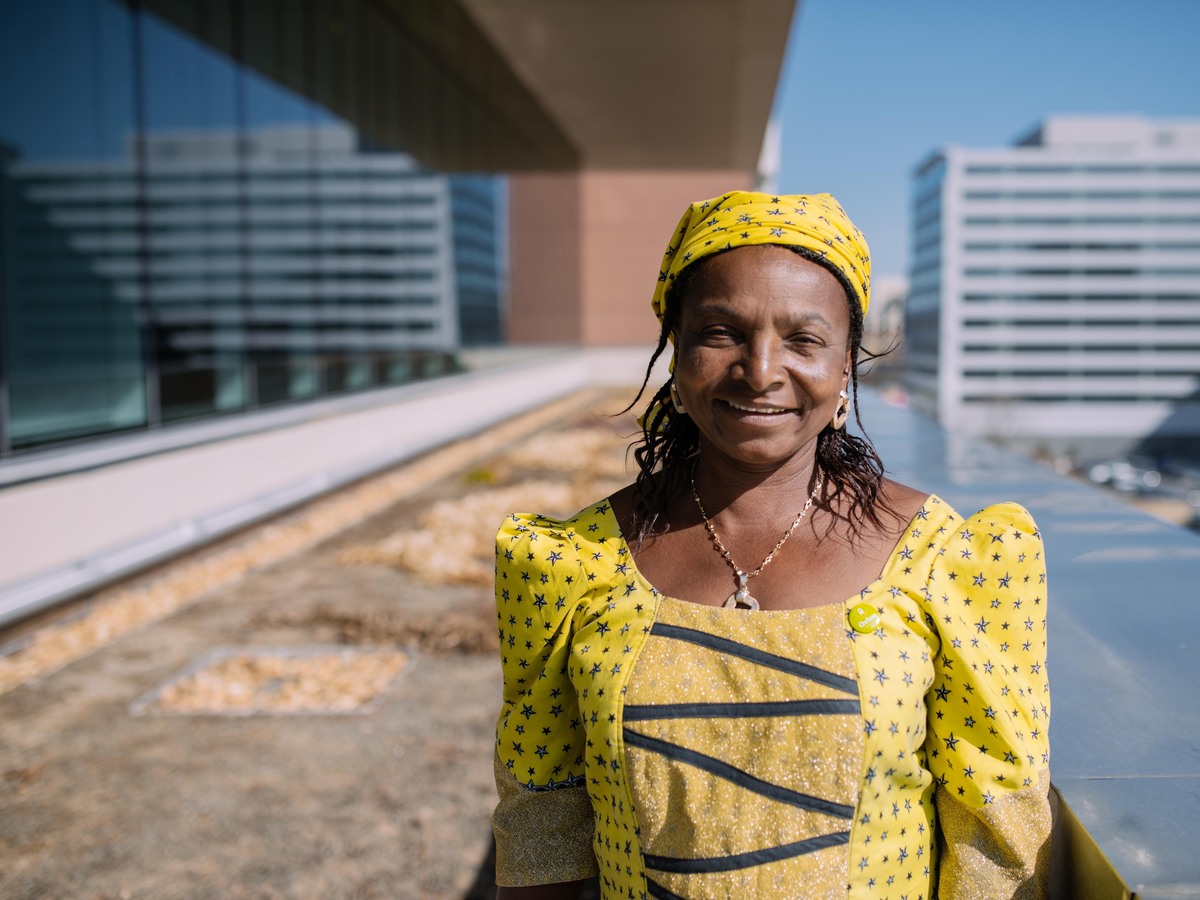 Monica Maigari, a Female Food Heroes contestant from Nigeria, is visiting Washington, D.C., for the first time on a trip sponsored by Oxfam. She says NPR's rooftop garden, where she is pictured, is "great for carrots and tomatoes."

On top of winning $1,000, which she used to buy land, there are other perks. She's currently in Washington, D.C., helping Oxfam lobby Congress on U.S. legislation to improve global humanitarian response and give local groups the tools and resources they need to act when disaster strikes — an idea that Maigari can stand behind.

And now that she's become a leader in her village — where "even the men" respect her, she says — she will use her power to help female farmers. She wants them to learn how to read and write, learn how to use the machines that will pack their food in containers for supermarkets, and get their foodstuffs registered and vetted in Nigeria's version of the FDA.

Don't even get her started on mangoes. "They drop down and we cannot preserve them; they just go to waste," she says. "It's a serious problem. They rot and we cannot sell them at the market."

Maigari, who visited NPR this week, noticed our building's rooftop garden, looking pretty dead thanks to winter, and happily gave us some good advice.

She likes that our box garden is "well-manured," and says it would be great for carrots, tomatoes and spinach. But no more than four kinds of crops, she says — that way NPR can "grow enough to sell at the market."