Accessibility links
Kenyan Teacher Up For Million Dollar Teaching Prize Is Out To Foil Terrorists Who Recruit Youth : Goats and Soda Terrorist groups in Kenya are trying to lure smart recruits who can give orders and boost their brand on social media. A high-school teacher is battling them in the classroom. 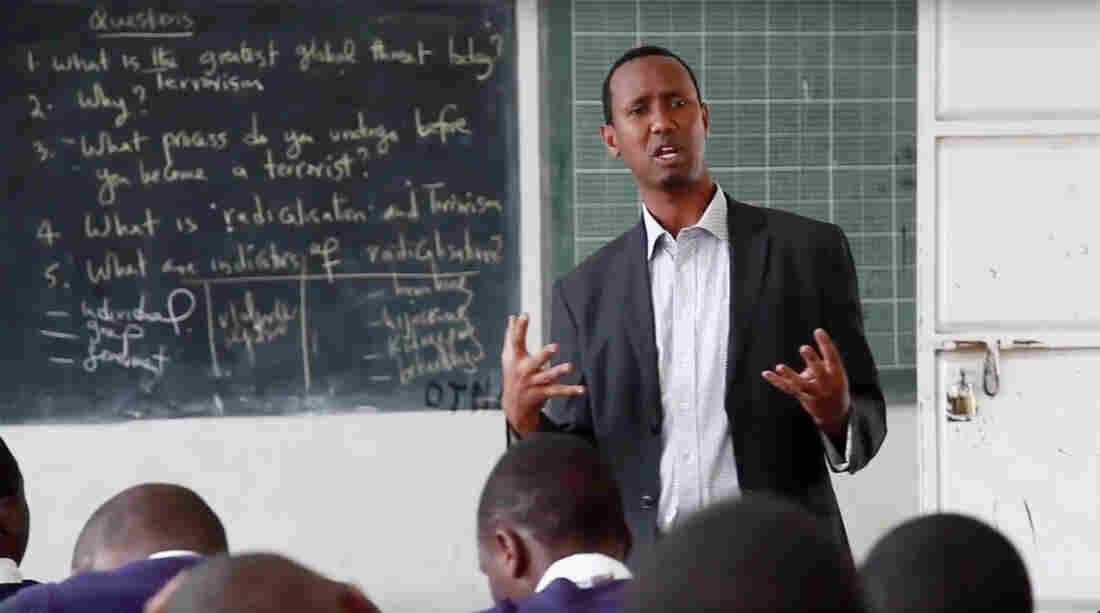 Ayub Mohamed is a nominee for the Global Teacher Prize, worth $1 million, given out by the Varkey Foundation. YouTube hide caption 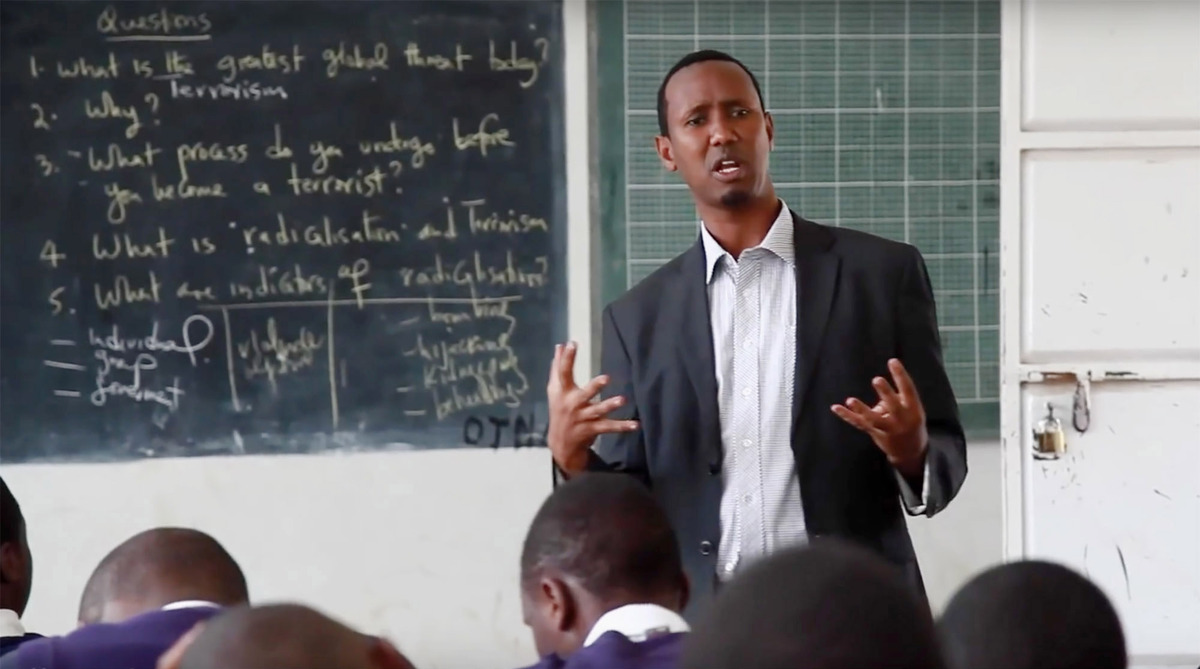 Ayub Mohamed is a nominee for the Global Teacher Prize, worth $1 million, given out by the Varkey Foundation.

Employers want to hire the best and the brightest to get the job done.

So do terrorist groups.

In Africa, terrorist groups are actively recruiting well-educated boys and girls. The groups want recruits who can be leaders, who know how to give orders, who can boost the brand on social media.

One Kenyan teacher is fighting back — and his efforts have made him a candidate for the Varkey Foundation Global Teacher Prize, which comes with a $1 million award.

His name is Ayub Mohamud. A business studies teacher at Eastleigh Boys School in Nairobi, he's the Somali-Kenyan founder of a group called Teachers Against Violent Extremism. The goal is to teach high school students how to rebuff recruiters from terrorist groups.

"These extremist groups, they like young men who are educated," says Mohamud. "Like in the Garissa University Attack. "

In the attack by Al-Shabaab on Garissa University last year in Kenya's Northeast, 147 students were killed. One of the lead gunmen was a graduate of Nairobi's top law school.

"He was educated, he was university student, he had done law," Mohamud says. The terrorist groups "want someone who understands ... someone to give instructions."

So recruitment tactics are changing. The suspected terrorist recruiter who approached 18-year-old Abdulahi Meyow did not talk of holy jihad or the pleasures of an afterlife for those who die in the line of battle. He offered money: $50 dollars if Abdulahi would do a project.

"He just said that I have this project whereby you can actually gain money for your family," says Meyow.

Meyow wasn't told what the project was. He was told that he was singled out because he's a good student, "a head boy, I can see you're working hard." He's captain of his high school class at Eastleigh Boys School.

"First I thought — let me do it," Meyow says. But the 18-year-old didn't know what the project was. And he had enough doubts to ask his parents for advice.

His family did not believe him. It was too much money, they said. Not even a Kenyan teacher could make $50 in a day.

"They actually thought I was making up the stories," Meyow says. "So it is then he approached me a second time, the same guy. And he told me, did you think about it. I was like ... I don't know ... So I approached my teacher. It's when my teacher explained everything."

That teacher was a member of Mohamud's group, Teachers Against Violent Extremism.

To see how schools can inoculate kids against recruitment, I watched Ayub Mohamud lead his high school class through the traditional interpretation of jihad.

"So what are Islamic teachings on going to war? Eh?" he asks.

The students — all boys, in school sweaters and striped neckties — eagerly raise their hands.

"Jihad means you can't kill women and children," one says.

"Jihad means you have to ask your parents first" before you fight, another student says.

All these rules if followed would put a crimp in any terrorist plans. But what's important, Mohamud says, is not the answers but the fact that kids can ask questions in the classroom.

Not long ago, simply leading a discussion about jihad would make you suspect.

"And if we don't teach these students then chances are very high they'll learn from other places like social media, from bad company and so on and that makes them vulnerable," he says.

Listening to Mohamud, I realize that if he were to substitute the word "sexuality" for "extremism" and "condom" for "jihad," he could be pushing for more sex ed. Which, incidentally, he thinks Kenya should do much more of.

"In the African context people don't like talking about [sex] but I think that's living in denial," he says.

Mohamud would like to see classes in countering violent extremism as part of the national curriculum.

His work has made him one of only 10 teachers around the world — and the only African — on the short-list for the Global Teacher's Prize. On Sunday he finds out if he wins the top award.