Accessibility links
New Mapping Project Uses Volunteers With Smartphones To Map The Unmapped Streets Of Dar Es Salaam : Goats and Soda With cameras and smartphones, volunteers in Tanzania are snapping pictures as they cruise the dirt roads of Dar es Salaam, one of Africa's fastest-growing cities.

How Do You Start Mapping Unmapped Streets?

How Do You Start Mapping Unmapped Streets? 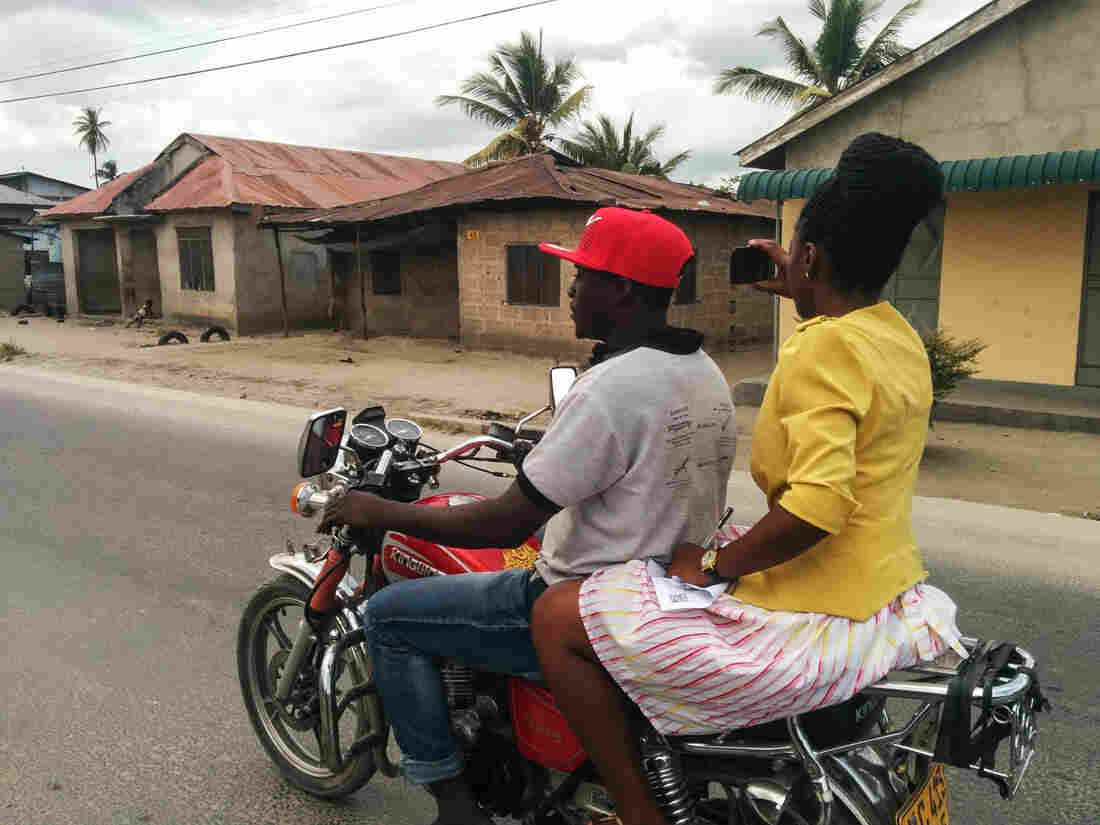 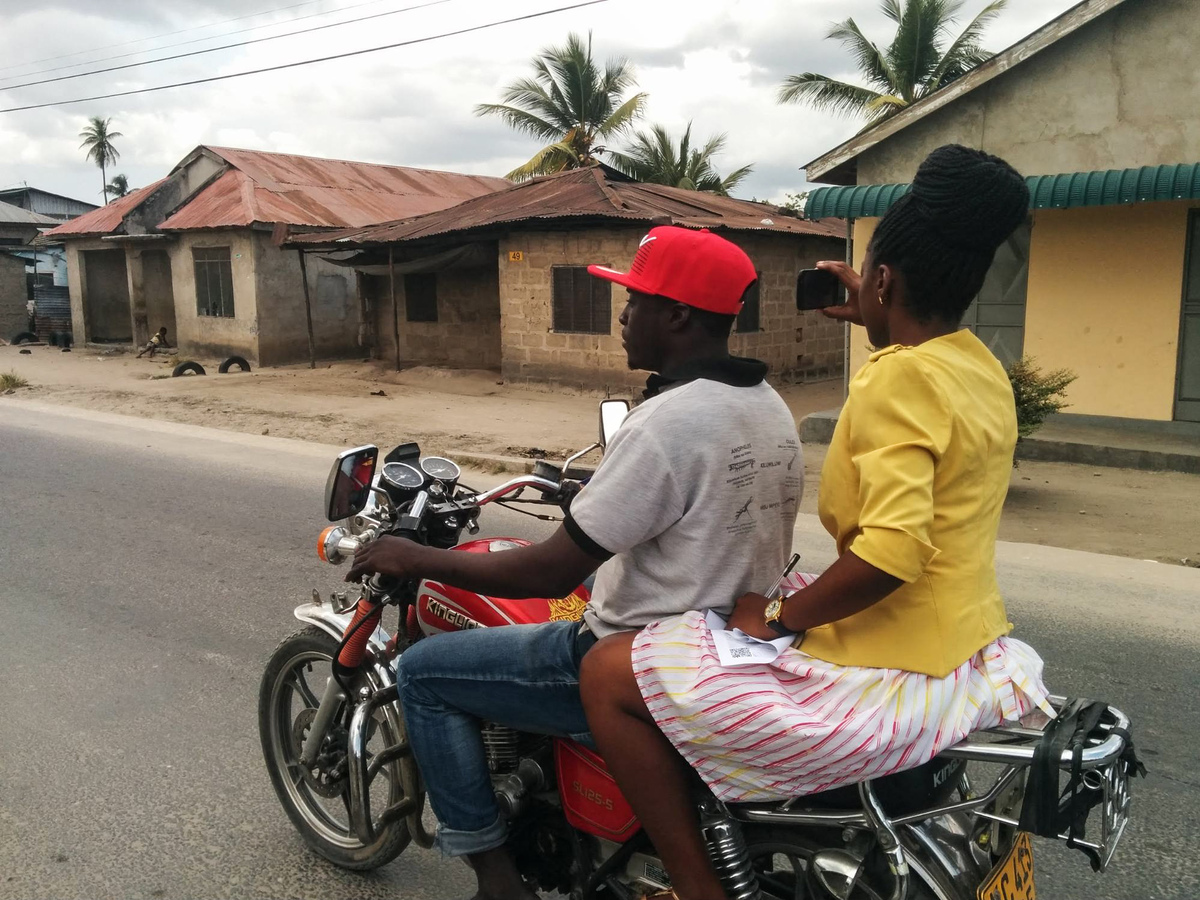 Google Street View allows people to virtually walk through places from the Aeon Mall in Okinawa, Japan, to historic sites like Petra in Jordan without leaving their homes.

But type in Dar es Salaam, Tanzania, and you won't see anything. That's because the city is basically off the Google grid, as are many locations in developing countries.

A joint effort between the World Bank's Dar Ramani Huria and Swedish startup Mapillary aims to change that.

"Dar es Salaam has really poor map data," says Jan Erik Solem, CEO of Mapillary. "The reason is that the mapping companies need people on the ground or in the local area to create the actual map."

These missing maps make it next to impossible to track traffic congestion, to effectively deploy resources to poverty-stricken communities and to build public transportation systems.

And without detailed maps, it's harder for cities to prevent, and recover, from natural disasters.

Dar es Salaam experiences devastating floods every year during the rainy seasons in early spring and toward the end of fall. Puddles turn into rivers that inundate roads and homes, leaving many people displaced or even dead.

"We had the worst floods in 2011 when more than 40 lives were lost," says Mussa B. Natty, former director of the ​Kinondoni​ Municipal Council. Kinondoni is the largest of three districts​ ​i​​n Dar es Salaam.​

"More than 2,300 houses were affected and the government had to organize temporary shelter. The hard hit were the urban poor residing in valleys. There was a repeat of flooding in 2013 and 2014 and infrastructures were severely damaged."

A year ago, in March 2015, when the mapping project began coming together, heavy rain and floods left 5,000 people homeless and caused seven deaths. In May, 12 more people died in floods.

The root cause of this flooding is lack of infrastructure like adequate drainage systems, according to Solem and World Bank consultant Mark Iliffe.

Maps of the city detailing roads, homes, streams, drains and other features could help by becoming the first step in adequate city planning.

"Sparking the community's interest in mapping has the potential to truly transform Dar es Salaam into a prosperous city with the infrastructure to prevent floods, bring awareness to the need for flood prevention and risk reduction, and arm its citizens with the right tools and skills to build a better city," states a World Bank blog post celebrating the mapping efforts.

So how do you create maps without mappers?

Mapillary and the World Bank have handed the job off to the people who know the city best — its citizens.

Volunteers are mounting camera rigs to their tuk tuks — three-wheeled motor-powered vehicles — to snap pictures as they cruise Dar es Salaam's dirt roads. Others download the Mapillary app on their smartphones and capture images as they walk or hitch rides on motorbikes. In all, more than 260 people have volunteered.

"Every time someone takes pictures of a place, the images are connected together to reconstruct the location in 3-D [in Mapillary]," Solem says. It looks like this.

These 3-D models become digital maps and real-time models of Dar es Salaam. The models are generated with computer vision, a technique where images are analyzed to produce high-quality data about the real world.

"Not many people think of photos as the main source of data for improving maps and navigation," Solem says. "But photos are a very powerful feature that add more details to maps, like missing roads and buildings and specific properties like how wide streets are."

The maps can then help ​pinpoint flooding trouble spots.

​Programs like OpenStreetMap, Mapbox Studio and InaSAFE are used to create the maps and can help reproduce natural disaster scenarios so locals can improve city plans and disaster response efforts.

"Understanding the areas which are most affected by the floods will lead to more informed decisions by municipal authorities to locate infrastructure to combat localized flooding," Iliffe wrote in an email to Goats & Soda.​

​Other community members are going a step further. In addition to taking pictures, they're learning how to create sophisticated maps with GPS devices and professional mapping drones. ​

Despite these efforts, the city will never be fully mapped, Iliffe says. It's one of Africa's fastest-growing cities, with a population that's expected to hit 21.4 million by 2052. As the population surges, maps will become ever more critical in saving lives from floods. But it's an endless task.

"We're not expecting the map to ever be complete," he wrote. "Dar es Salaam is a living, breathing city that is constantly changing."