Accessibility links
Two High-Profile Cases Of Violence Against Women In Latin America Have Sparked Viral Outrage : Goats and Soda The murder of two young Argentines and the sexual harassment of a journalist in Mexico City have gone viral — and drawn attention to violence against women in Latin America. 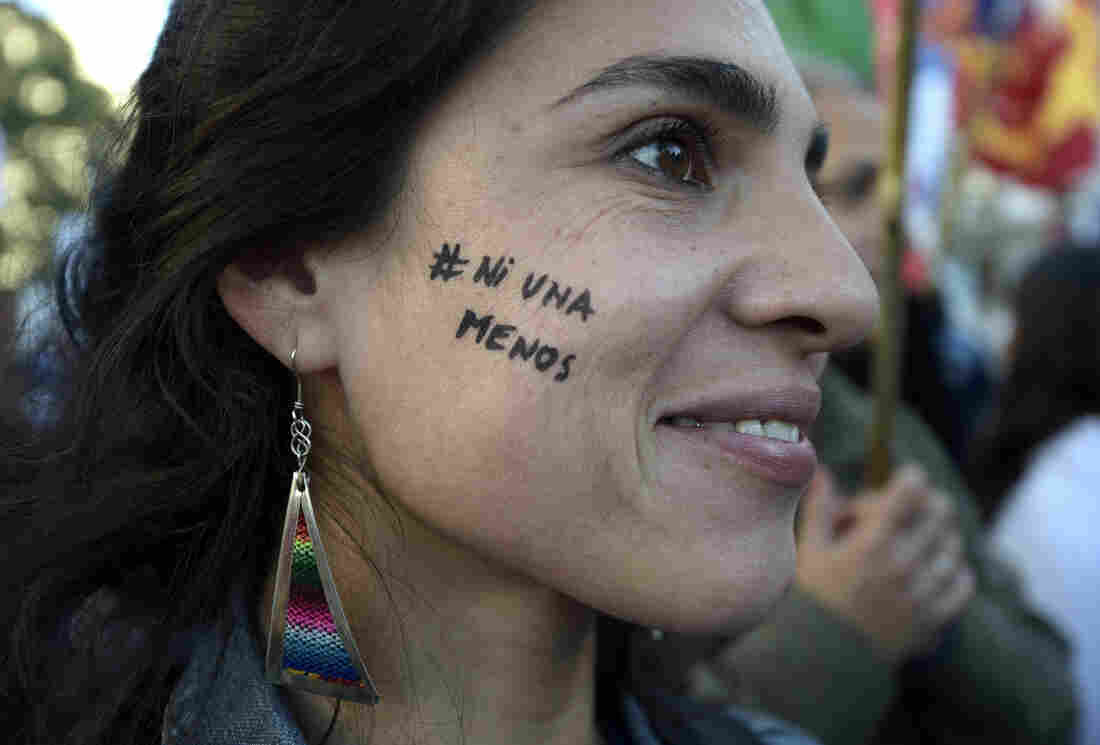 A woman participates in the "Ni una menos" (Not One Less) demonstration against violence against women in Buenos Aires on June 3. Juan Mabromata /AFP/Getty Images hide caption 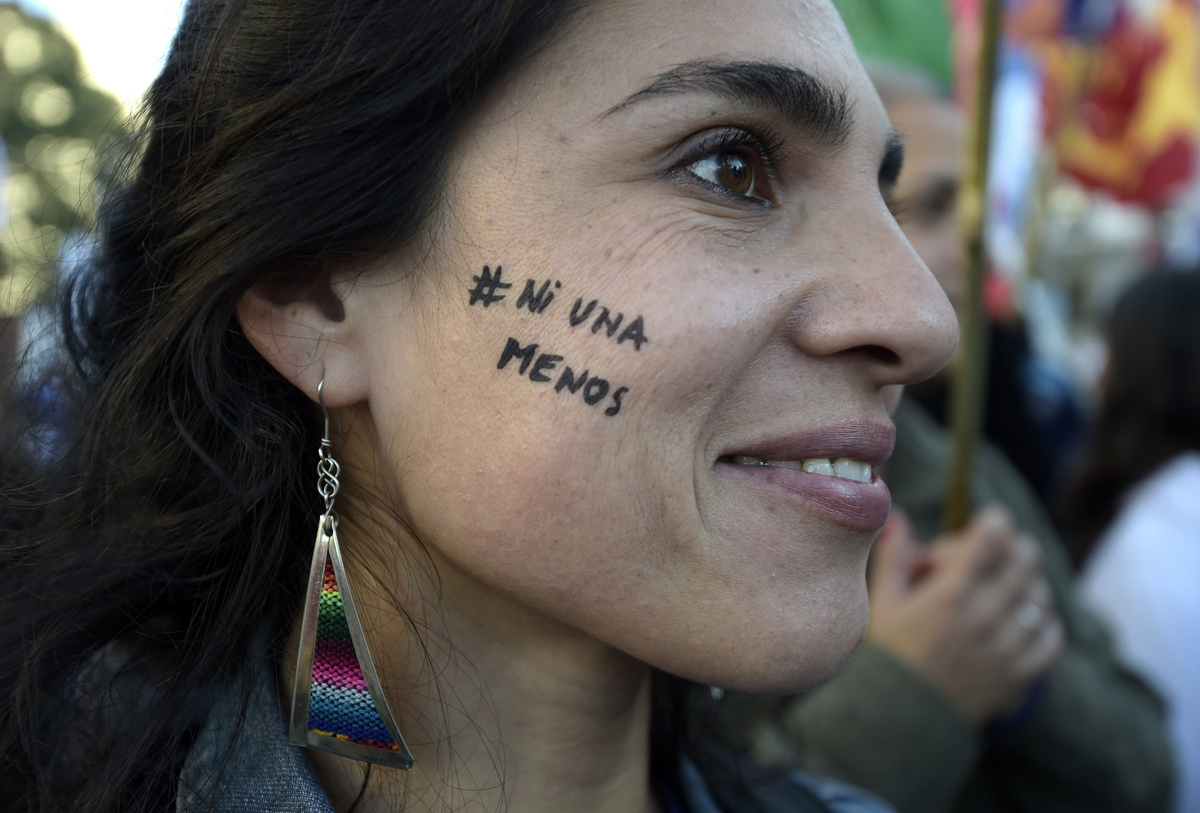 A woman participates in the "Ni una menos" (Not One Less) demonstration against violence against women in Buenos Aires on June 3.

By the time I read about Marina Menegazzo and María José Coni, their bodies had already been found. They'd been missing for nearly a week and were discovered on Feb. 28, wrapped in plastic bags and dumped near a beach in Ecuador. One had her skull bashed in; the other had stab wounds and had bled to death. The two Argentine tourists, 22 and 23, had been vacationing in Ecuador. Their murder wasn't reported much in English language media.

As is often the case with crime in Latin America, there's been an array of versions of what happened, shrouded in a cloud of doubt. Initially, Ecuadoran authorities detained two suspects and said one had confessed that he and his friend were drunk. One of them tried to touch one of the girls and she resisted. He then hit her on the head with a stick; the blow killed her. The suspect says her friend panicked, and the other murder suspect stabbed her.The families of the victims publicly questioned this version — they think both suspects might have had nothing to do with the murders and were being forced by authorities to confess.

In recent days, another version of the story has surfaced: One of the suspects has linked the murders to a group of Colombian, Ecuadoran and Venezuelan drug traffickers, one of whom was arrested this week. Coni's father has publicly speculated that "perhaps they kidnapped the girls to traffic them and killed them." The Argentine Consul in Guayaquil, Ecuador, has said he does not discount that hypothesis.

One thing is for sure: The murders have sparked outrage in Latin America, where there is a widespread crisis of femicide (the deliberate killing of women) and sexual violence. Central America has some of the highest rates. The 2012 Small Arms Survey, often cited by the United Nations, surveyed murders of women around the world in the years 2004-2009. El Salvador is the country with the highest femicide rate — 12 per 100,000 inhabitants — followed by Jamaica (10.9), Guatemala (9.7) and South Africa (9.6). Many of the deaths are related to gang violence that rages throughout much of Central America: In a recent series, NPR investigated the brutal effect gang violence has on young women, who are seen as sexual trophies and are targeted in sexual attacks.

Central American women who choose to leave the region and head north to the U.S. face a grim reality. Amnesty International estimates that 60 percent will be assaulted on the way. Activists report that many take birth control before the dangerous journey, in preparation for possible sexual assault.

And it's a problem that extends far south. According to Argentine NGO La Casa Del Encuentro, in 2014 nearly 300 murders in Argentina were considered hate crimes against women. All of this has led to a growing women's rights movement, with the hashtag campaign #niunamenos (#notoneless) protesting the killing of women. It's also led to femicide laws in several Latin American countries, including in Brazil, where the U.N. estimates that an average of 15 women a day are murdered in acts of gender violence. The new Brazilian law imposes jail sentences of up to 30 years for convicted offenders and longer sentences for those who attack girls under 14, women over 60 and pregnant women.

The outrage over the fate of the Argentine tourists goes beyond the killing itself. News articles about the murders are filled with reader comments like this one: "It's terrible, what happened to them, but how irresponsible of their parents to let them travel alone, backpacking." Another commenter writes: "The world is tough and their parents clearly didn't teach them well. ... What did they expect?"

That line of questioning has launched a twitter hasthag #yoviajosola (#Itravelalone). And there have been several written reactions to the incident, notably a letter by a Paraguayan college student named Guadalupe Acosta, in the voice of the murdered girls, which is going viral in Latin America. It's been shared by over half a million users across Facebook.

Here's how it starts off: "Yesterday they killed me. I didn't let them touch me, and they smashed my cranium with a stick. They stabbed me, and they let me bleed to death. Like a waste, they put me in a black polyethylene bag, wrapped with packaging tape, and I was thrown out to a beach, where hours later I was found. But worse than my death, was the humiliation that came later. From the moment they had my lifeless body, nobody asked, where is the son of a bitch that ended my dreams, my hopes, my life? No, they instead started asking me useless questions. Me, can you imagine? A dead woman, who can't talk. Who can't defend herself. What were you wearing? Why were you alone? What was a woman doing, traveling unaccompanied? You went into a rough neighborhood. What did you expect?"

What did you expect?

I was given the answer to that question as a kid.

It's the fourth grade, in a public city school in Buenos Aires, Argentina. We are a rowdy bunch of 9- and 10-year-olds in the girls locker room, yelling, teasing each other about boys. This one classmate tells us she has a crush on this one boy; in response we hoot and holler, and she spits out this rhyme she heard somewhere: si te quieren violar, relajate y disfruta. If you're going to get raped, relax and enjoy.

The shenanigans go on in the locker room as if nothing of note has been said. Most of us don't fully understand how sex works. And none of us, certainly not I, understood the horror that limerick encloses, or the awfulness of a 10-year-old girl belting it out in a locker room.

As the years passed, I didn't think about the importance of that rhyme. Not even as I grew up, and street harassment became common currency. From the time I hit puberty, I could rarely walk out in the streets without getting comments from men. On a good day, it was a piropo — what some say is a "romantic" and "clever" version of a catcall.

For a lot of women, piropos are enjoyable, part of our culture. A friend and colleague tells me, "In Mexico, if you don't get told a piropo, even if it has sexual overtones, you feel sad. In the U.S., it's not part of the culture, so you feel it's harassment. What is the line that cannot be crossed? Where do you say 'enough'?"

I can tell you that for me, growing up, piropos were rarely respectful or remotely funny. They were often verbal sexual threats, violent innuendos, a stranger letting me know that he'd like to rape me, hurt me or get me pregnant. And even though this happened nearly on a regular basis, and in public, I can't remember a single time anyone intervened. As a kid, I didn't have the guts to stand up for myself, nor did I think it was always safe to do so.

The frustration with these kinds of attitudes was captured in a popular skit by Argentine comedienne Malena Pichot. In it, she at first acts sarcastically flattered toward violent harassers. Later on, Pichot reveals how she truly feels by gruesomely murdering the men who have accosted her. "I want to clarify that [our show] is completely against murder," she notes at the end of the skit.

She's one of many voices that are rising, arguing that there's just a small step between a verbal threat toward a woman and the act itself. In Argentina, groups like Accion Respeto campaign and protest against catcalling. In Peru, an online platform tracks reported street harassment incidents on a map. It seems governments might be listening. Early last year, an Argentine congresswoman proposed fines of more than $400 for street harassers. Last year, Peru approved an anti-street harassment law. And lest we make this solely a Latin American issue (it's not), last year there was an uproar over harassment on the streets of New York; there's an ongoing discussion in this country about the culture of blaming victims for their assaults.

In recent weeks, the discussion was reignited on Spanish language social media following attacks on an American journalist, Andrea Noel, in Mexico City. Footage from a security camera near the scene of her attack shows her walking down a street in the posh neighborhood of Condesa. She's wearing a skirt; a man runs up behind her and pulls her panties down. She falls to the ground, and he runs off.

Noel began a social media campaign and was vocal in denouncing the attack. She paid a price for speaking up: She says she received such an overwhelming number of death and rape threats that she left the country temporarily. She says the last drop was having a laser pointed at her forehead, aimed from an SUV with tinted windows.

A quick search of her name on social media shows an outpouring of support peppered with tweets calling her a prostitute and a liar — and graphic rape threats. Many comments came from women. And that little question often pops up: Walking around in a short dress, what did she expect? 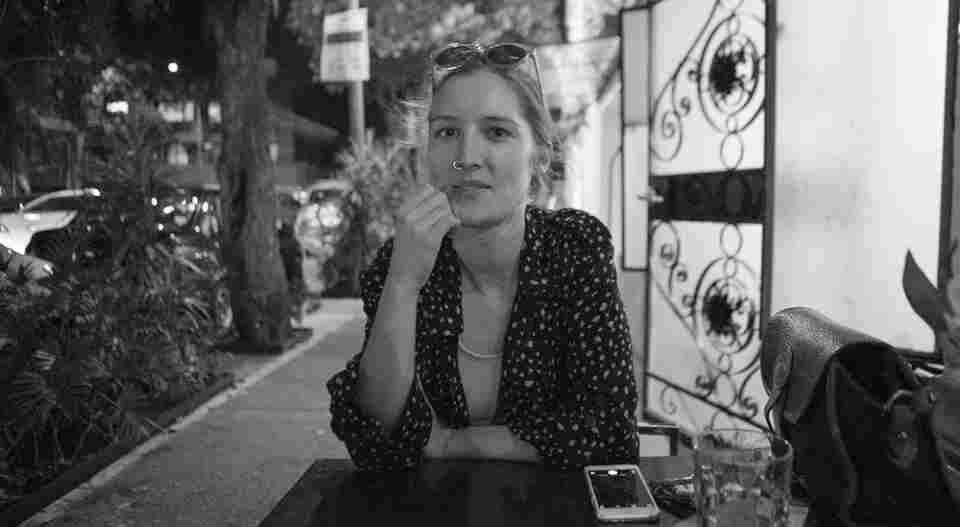 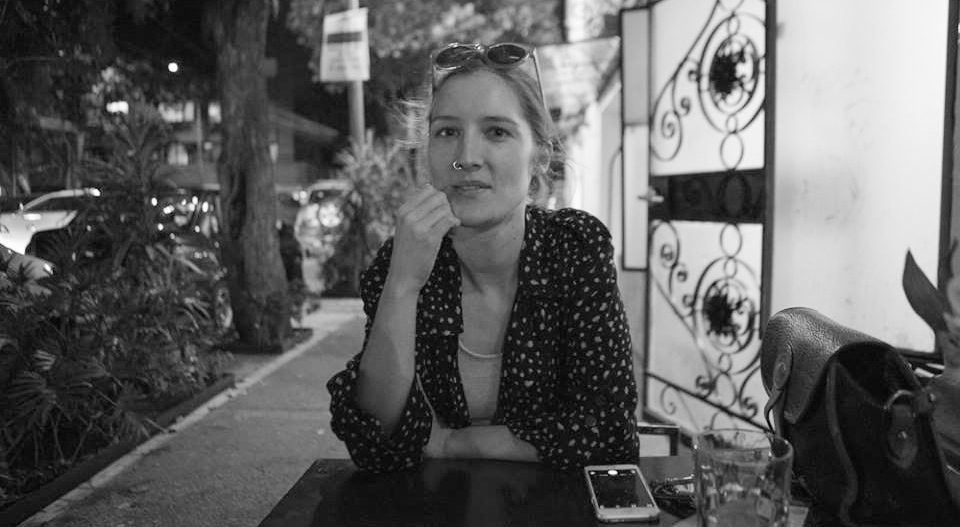 American journalist Andrea Noel was sexually harassed on the streets of Mexico City.

My first reaction to the video, to be perfectly honest, is not a noble one, but one that I think is important to recognize: I'm frustrated that she did not know better than to walk down the street in a short dress when street harassment is such a known problem.

I catch this nasty thought and get angry at myself for it. I think of the many times when I was a kid and some stranger said something inappropriate or terrifying to me in a public space. I think about a close childhood friend who was pinned down and fondled at a bus stop, only to be told, "Well, you are very pretty," by the officer who took her complaint. I think of another friend who, as a teenager, was raped by a cab driver and, after sitting unattended at the police station for too long, just got up and left. I think about Marina Menegazzo and María José Coni. And of all the bodies of women whose names I've read but can't even remember, because there are too many for my memory to contain.

And then I realize: It's something about Noel's shock that distresses me. I realize that possibly, when she was growing up, no one told her, time and time again, like a mantra, what to expect.

Or maybe someone did tell her, and she simply had the audacity to expect more.

What should women expect? The answer is given around the world every day. The answer is in a trash bag on the Ecuadoran beach. It's swallowed down with every birth control pill taken by migrant women before they travel from Central America to the U.S. It's in the quick footsteps of girls everywhere who walk fast so they don't get hurt or bothered on their way home.

The answer about what to expect had been given to me long before I even asked the question — when I was 10 years old, in a girls locker room.

But maybe it's time we all expect something better.