Accessibility links
On #WorldWaterDay, Attention Is Paid To The Need To Eliminate The No. 1 Water Contaminant : Goats and Soda For millions around the world, it's the invisible microbes and parasites that can turn their daily drinking water into a dangerous elixir. 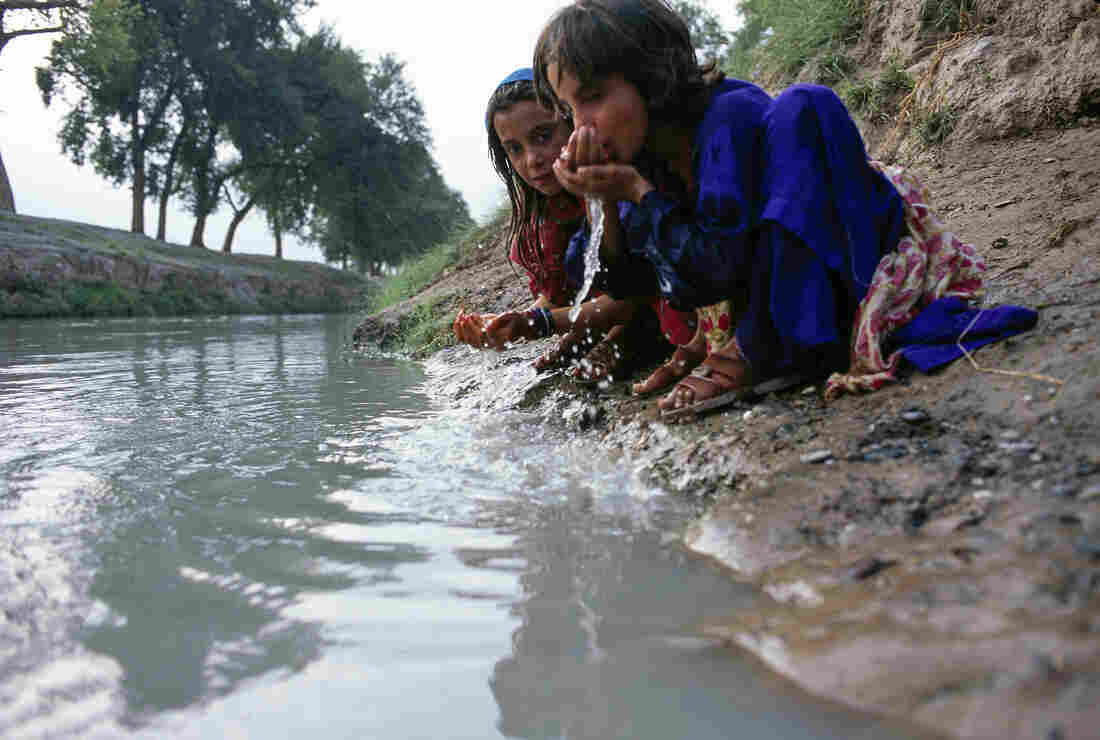 Young girls drink water from a canal flowing between nearby refugee camps and the main road in Peshawar, Pakistan. Majority World/UIG via Getty Images hide caption 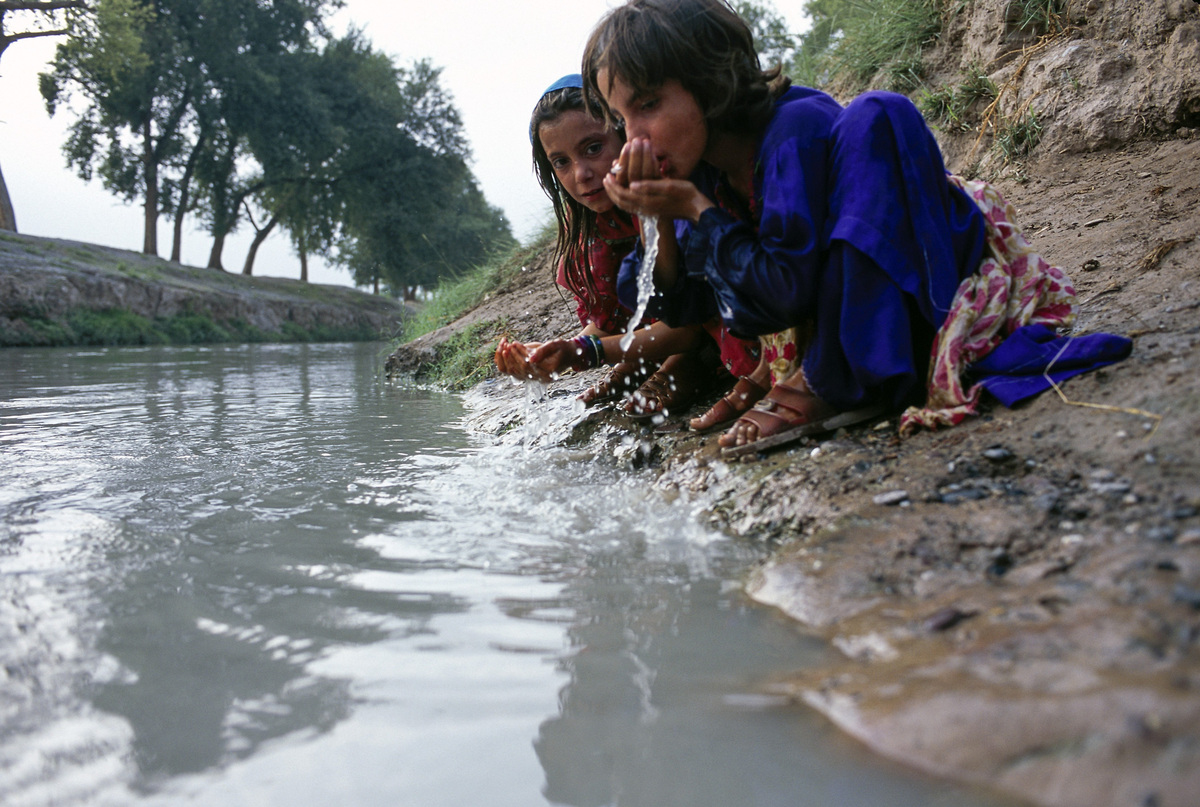 Young girls drink water from a canal flowing between nearby refugee camps and the main road in Peshawar, Pakistan.

What is safe drinking water? Is it water that's clear? Smells clean? Tastes good? Comes from a trusted source, like a well or a pipe?

Those factors don't matter if the water is contaminated by tiny microbes or parasites invisible to the human eye.

For 663 million people around the world, lack of clean water causes hardship, disease and even death. And by far the greatest cause of contamination — above cholera, dysentery, typhoid and polio, E. coli and other bacteria, as well as parasites like worms and snails — is human waste.

"The vast, vast majority of diseases are associated with human excrement and how that is managed," says Bruce Gordon, coordinator for water, sanitation, hygiene and health at the World Health Organization. "And in dense urban slums, excrement is everywhere."

WHO estimates that about a quarter of the world's population drinks water that is at least occasionally contaminated with fecal matter, with percentages ranging from 14 percent in Europe to 52 percent in Africa.

Diarrhea is the biggest killer resulting from water contaminated with feces. Whether and how quickly people get sick depends on how much bacteria there is in the water and if their bodies have become resistant to the contaminants.

Travelers from wealthy countries to the developing world might be familiar with "Montezuma's Revenge," "Turkey Trots" or "Delhi Belly." And even if they vow to drink only bottled water, they might slip up. Travelers might brush their teeth with tap water or eat a salad with contaminated lettuce leaves. And then they can fall ill. For these individuals, "diarrhea itself is a self-limiting disease," says Gordon. "The impacts are minor — annoying, but minor."

That's not the case in countries where dirty water is the norm. To tourists, it may seem like the locals tolerate it better, but over time it takes a toll. And chronic diarrhea can have lifelong effects.

"The gut structure actually changes after repeated diarrhea," Gordon says. "Children's growth is stunted and there are developmental problems." At any one time, according to a U.N. report on safe water, half the world's hospital beds are occupied by people suffering from illnesses linked to contaminated water.

In the developing world, diarrhea can be fatal, especially for children. They haven't built up immunity to the contaminants yet. Some 842,000 diarrheal deaths a year are caused by unsafe water and inadequate sanitation, and most of those deaths are among children, says Gordon.

Treatment, including clean drinking water for rehydration, may not be readily available. "In the worst cases, when children are exposed [to water contaminants] early in life, they die," says Gordon. The inflamed intestine depletes body fluids causing severe dehydration; inadequate nutrition and lack of safe water compounds the problem.

Things have gotten much better since 1990, as 2.6 billion people have gained access to cleaner drinking water. That means sources of water protected from outside contamination: water piped into a home, public taps, or protected wells and springs. "Right now, 90 percent of the world has access to an improved drinking water source," says Gordon. Reaching that number took more than a decade of international development efforts.

But "improved" doesn't always mean safe. When WHO looked deeper at those sources, he says, researchers found that some of the water making its way through protected pipes, wells or springs had become contaminated before reaching the people who drank it.

And when they actually tested the water, they found that the estimated number of people lacking safe drinking water more than doubled, from 663 million to 1.8 billion people.

Gordon and others working to make water safe throughout the world have their work cut out for them. Better monitoring of water sources are needed, says Gordon, as well as ongoing maintenance to ensure that the water remains safe.

"We have to continue to target the disadvantaged, and we have to sustain improved systems so they don't break down after they're in place," he says.