Accessibility links
Chewa The Lab Rat Has A Great Job, Good Retirement Benefits : Goats and Soda Rats can smell TB. They can identify it faster than a lab technician. And they work cheap — a bit of banana will do. USAID just gave a grant to a pioneering program.

Who can identify TB faster: lab technicians for APOPO such as Karim Chang'a, Rehema Kondo, Eustachian Sezary, or a rat like Chewa? No contest — it's the rat. Maarten Boersema/APOPO hide caption

Who can identify TB faster: lab technicians for APOPO such as Karim Chang'a, Rehema Kondo, Eustachian Sezary, or a rat like Chewa? No contest — it's the rat.

In Dar es Salaam, Tanzania, every morning, a medical specialist known as Chewa (a name that means brave in Swahili — but his bosses call him Mchapakazi, the hard worker) gets excited about his job. For two 40 minute sessions, punctuated by a nap and some recreational time with co-workers, he will test smears of human mucus for the presence of tuberculosis by sniffing deeply at each of 10 samples, then letting his supervisors know when he senses the disease in one. He has been taught by staff at the NGO called APOPO to know tuberculosis by its smell. Chewa is a 3-pound African giant-pouched rat.

An untreated tuberculosis patient can infect up to a dozen people a year. Almost 10 million people worldwide contracted TB in 2014, and some 1.5 million died from it. The disease is largely curable, but first it must be diagnosed. That's where the rats come in.

Conventional detection techniques in a lab are expensive and time-consuming. Since 2002, APOPO has pioneered the use of what it calls HeroRATS to get the job done in less time for less money. In a long cage with samples of sputum placed in recesses along its floor, the rats are trained to stop and indicate to their handlers when they recognize the scent of tuberculosis. They're rewarded with a treat — usually a bit of banana.

According to Robin Toal, community manager at APOPO, "Our rats can screen nearly 100 samples in 20 minutes compared to a laboratory technician, who takes around four days to do that many." So far APOPO's rats have screened more than 340,000 TB samples.

APOPO, which also trains rats to sniff out land mines, this past fall received a USAID Development Innovations Ventures Grant to expand its work with rats and disease detection. APOPO will concentrate on high TB prevalence prisons in Tanzania and Mozambique. It also plans to move beyond prisons to other places where people live and work in close quarters. 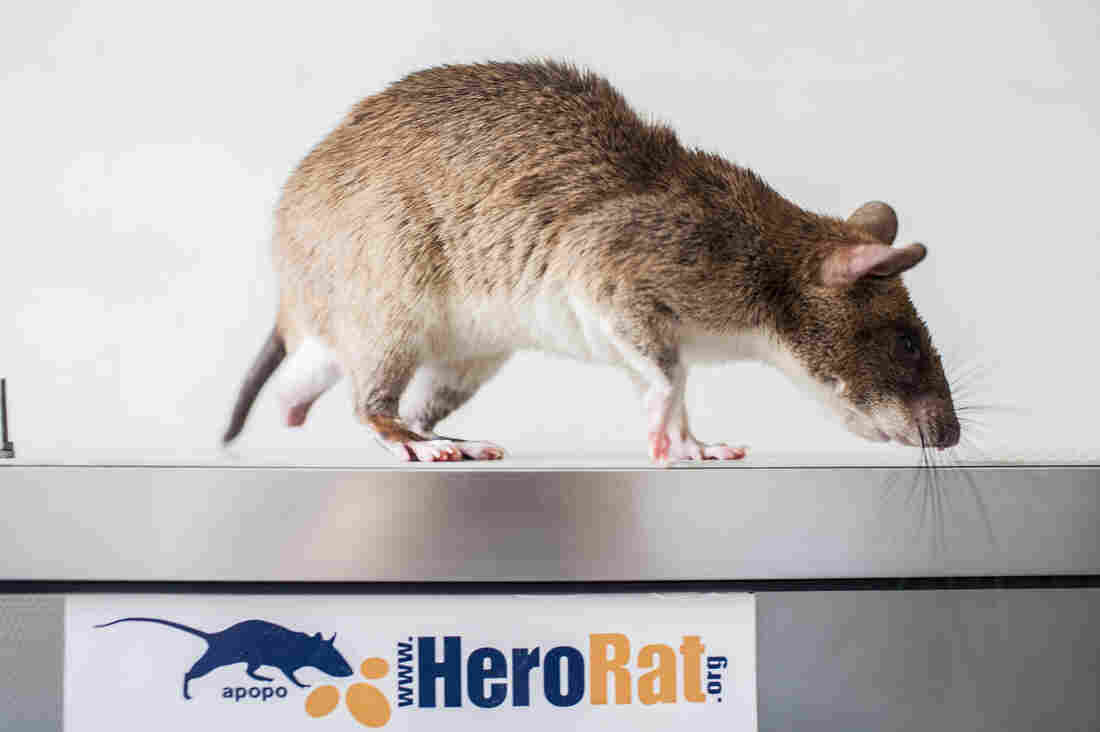 Chewa is one of 29 "HeroRATS" trained to detect TB in sputum at the APOPO lab in Tanzania. The reward for a job well done: a bit of banana. Maarten Boersema/APOPO hide caption 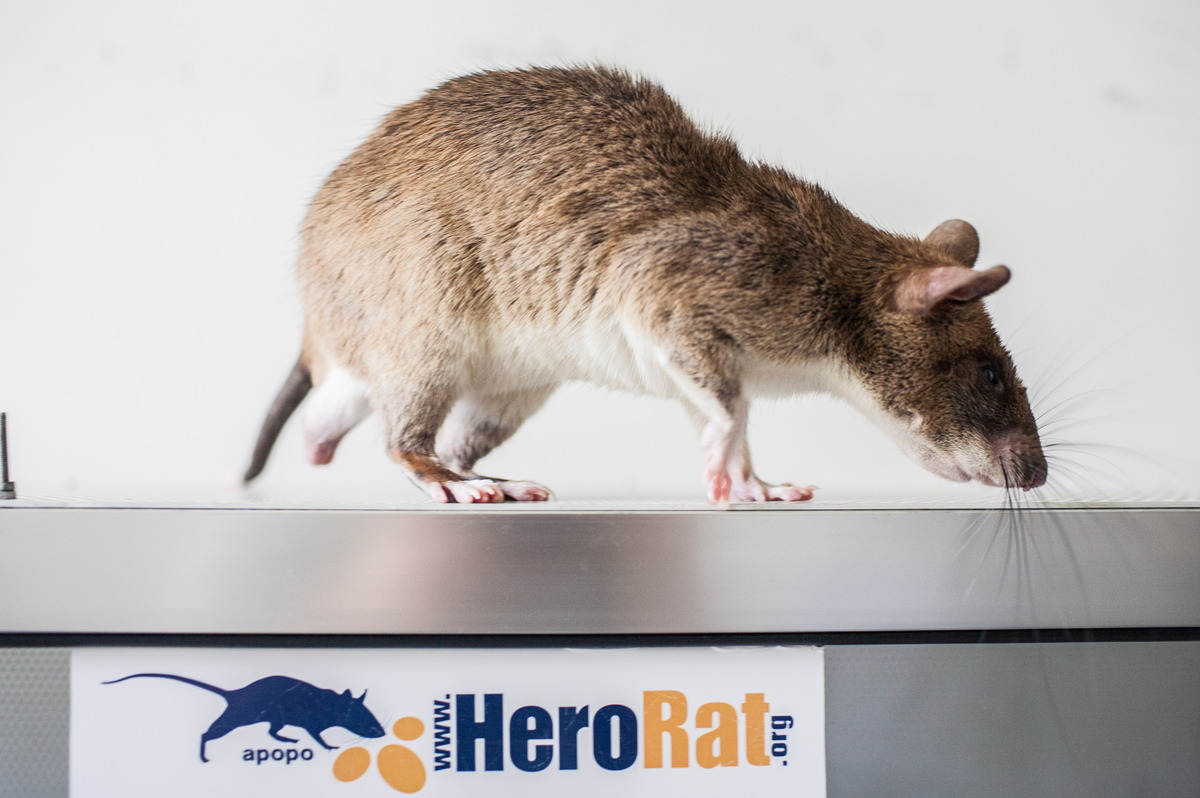 Chewa is one of 29 "HeroRATS" trained to detect TB in sputum at the APOPO lab in Tanzania. The reward for a job well done: a bit of banana.

Hard worker Chewa has a pretty sweet life. Born at a rat breeding center at APOPO's headquarters in Morogoro, Tanzania, he began his training at just a month old. Staffer Albert Carol ("Uncle Albert"), who is charged with socializing all the facility's baby rats, exposes them to people, tastes, smells — and a variety of situations.

"He pets and strokes them all day. He takes them for rides in his car, or on the back of his motorbike, to different buildings," Toal explains. "All of this is just get them used to a human environment so that they're comfortable with us, because only animals that are relaxed, comfortable and happy are able to do this kind of detection work." Currently 29 HeroRATS are at work detecting TB in Morogoro, with 26 more in the breeding program.

The rats, which can grow to 3 feet long (including tail), are trained and ready for disease-sniffing at the age of 9 months. Though they have a lifespan of about 8 years, the animals are allowed to retire whenever they want.

Says Toal: "They're enthusiastic when we come and open the doors in the morning. They jump on our shoulders. As soon as the animals stop showing that same level of enthusiasm, we start to evaluate them a bit closer. They all have daily health inspections and biweekly checks from a vet. As soon as we think they don't want to do it, then we'll happily let them retire. And they can live out their days lounging with their friends, snacking on watermelon, running on wheels, chasing their tails, whatever they want to do. We still take them out and play with them, they just don't get woken up in the morning. The life of a retired rat is especially blissful."