Baseball Is A Field Of Dreams — And Dashed Hopes — For Dominicans

Baseball Is A Field Of Dreams — And Dashed Hopes — For Dominicans 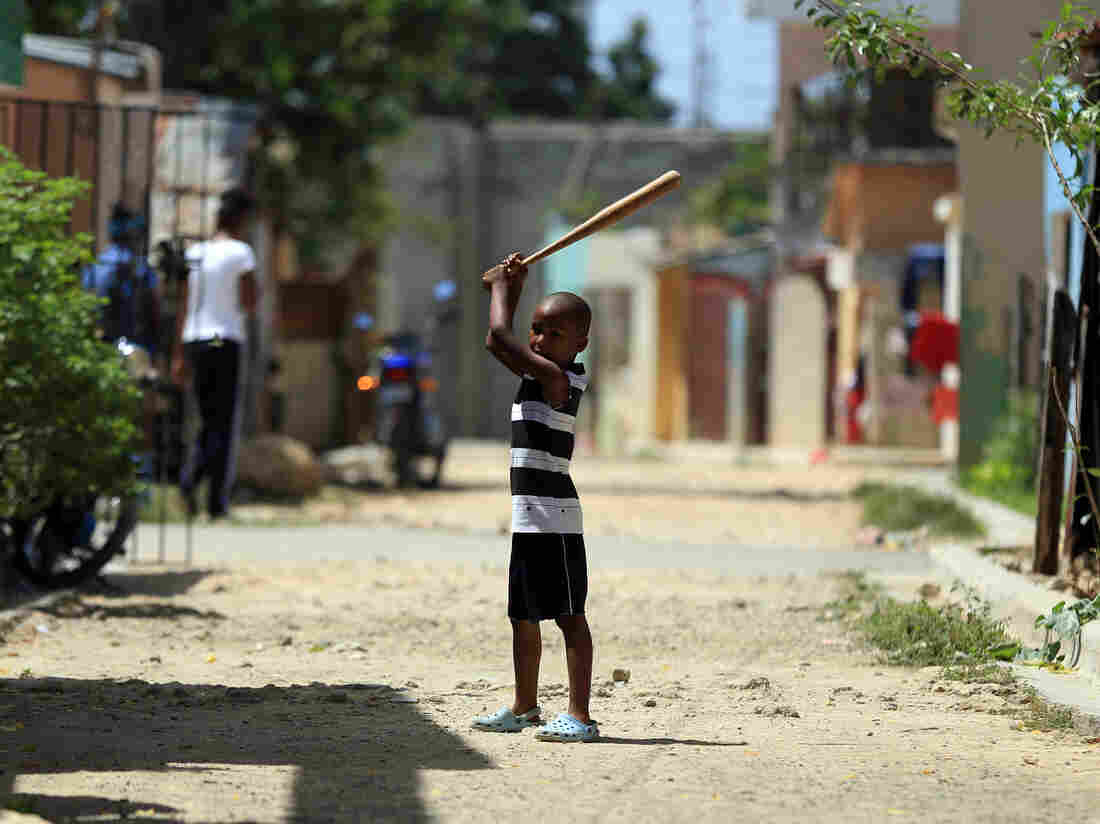 A boy is ready to take a swing on the streets of San Pedro de Macoris, a provincial capital of the Dominican Republic. Terrence Antonio James/Chicago Tribune/TNS via Getty Images hide caption 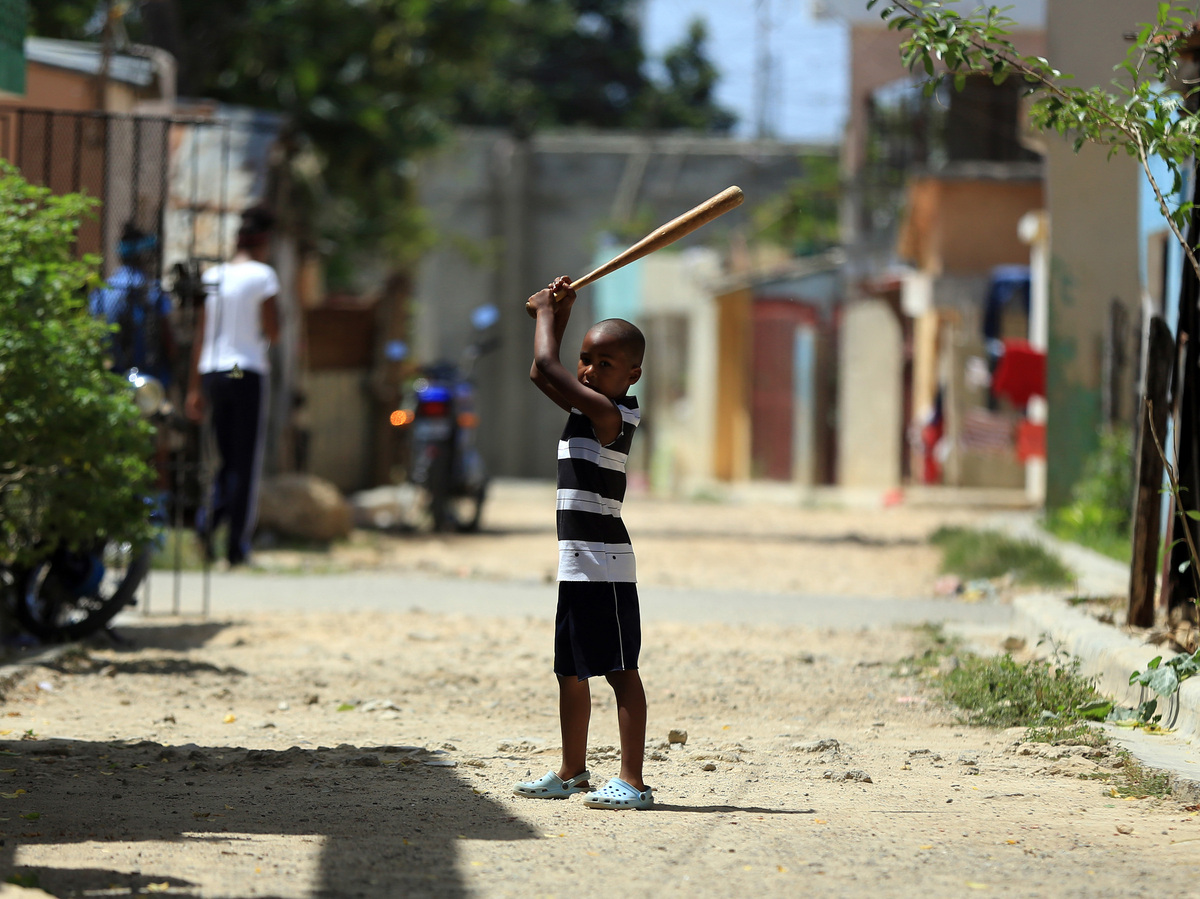 A boy is ready to take a swing on the streets of San Pedro de Macoris, a provincial capital of the Dominican Republic.

Baseball in the U.S. has become an international sport.

This season about a quarter of the 800-plus players on Major League Baseball teams were born outside the United States. The country with the biggest number is the Dominican Republic, which had 83 players on opening day rosters last year.

The success of Dominican major leaguers has been a boon for the Caribbean nation's economy. But there's also been controversy over the fate of young prospects who fail to make the cut.

The sport has long been popular in the Dominican Republic. With 4 in 10 Dominicans living in poverty, it's seen as a ticket to fortune.

And there have been some great success stories, leading to great things for the DR. Big Dominican stars have invested millions back home. Pedro Martinez, a pitcher best known for his time on the Boston Red Sox and elected last year to baseball's Hall of Fame, famously rebuilt his Dominican neighborhood of Manoguayabo with homes for dozens as well as churches, schools, a window factory and a baseball field. Former Los Angeles great Vladimir Guerrero was building so many homes in his hometown of Don Gregorio de Nizao that he opened a concrete block factory, a trucking firm and a hardware store.

Current Dominican stars including Albert Pujols through his foundation and David Ortiz through his have launched high-profile charity ventures in their home country.

That's not the only benefit. "Baseball has become a huge industry for Dominicans," says Rob Ruck, a history professor at the University of Pittsburgh who wrote about the country's fanaticism for the sport in his book, The Tropic of Baseball: Baseball in the Dominican Republic.

The Dominican Republic has become the de facto training academy for all of Latin America, which delivers by far the most foreign players to the major leagues of any region, says Ruck.

It's a business that puts thousands of Dominicans to work as they train local prospects as well as Venezuelans, Panamanians, Nicaraguans, Mexicans and Cubans who have escaped the communist regime. All of those countries have seen some benefit from baseball as stars send money back home. But only Dominicans have created a baseball infrastructure that promises a steady national industry for years to come.

Venezuela, which ranks No. 2 in the parade of MLB nations with 65 major league players on opening day last year, also once enjoyed its own player-development industry. But political unrest under the country's socialist government and a growing crime wave have sent major league teams fleeing. This year, a summer league comprising U.S.-sponsored teams collapsed, canceling the entire schedule.

Meanwhile, each of the 30 U.S. major league teams has an academy in the Dominican Republic. MLB itself estimates that teams spend $125 million a year on those academies. That's after paying perhaps an additional $200 million in signing bonuses to young Dominican players, plus whatever comes home from the estimated $400 million paid to Dominican major leaguers, Ruck says.

"It's easy to get to a half-billion dollars that baseball is bringing to the island," he says, adding that the number is probably significantly higher with thousands involved in developing the island's talent. And that's in a country with a 2014 gross domestic product of about $64 billion.

Nearly 10 years ago, when baseball salaries were smaller and the Dominican academies just gaining steam, the spending was the subject of an academic study by Carrie Meyer, an economics professor at George Mason University. She concluded that manufacturing, commerce and agriculture still made up most of the nation's economy but that baseball was having a clear impact.

The spending hasn't come without controversy, as is often the case with U.S. investments in developing countries. Allegations of exploitation, doping and other abuses have dogged the U.S.-run academies. Conditions at academies have improved markedly in recent years, says Ruck. "Most are more or less state-of-the-art facilities" that now emphasize proper nutrition and provide good living quarters, he says.

Still enduring, however, are charges the teams have exploited desperately poor youngsters from the Dominican Republic and elsewhere by encouraging thousands to quit school and chase baseball, Ruck says.

Most of these kids are tossed aside when they don't make the cut, says Charles Farrell, a sports advocacy and marketing consultant.

"You've been a dream merchant, telling these kids they can get rich, that they can have a successful career through baseball," Farrell says. "So you've got kids dropping out of school at 13 or 14 to prepare themselves for baseball."

Yet he estimates that only 2 percent make a living in baseball. The rest find themselves at age 19 or 21 with no education and no job prospects. "Baseball has a responsibility to offer these kids something else," says Farrell, who helped found an independent academy that aims to provide an academic as well as baseball education, the Dominican Republic Sports & Education Academy.

Several U.S. teams have added small-scale education programs, perhaps eight hours a week, that emphasize English and financial skills that could prove useful to ballplayers, Farrell says. And he predicts that MLB within years will mandate a broader education be part of academies run by its teams. It might prove profitable, anyway, as prospects from the better education system of Venezuela have proved a bit better at making the major league, which Farrell speculates is because their better education equips the players to meet the demands of living in America.

"It could be in the teams' best interests to turn out better-educated players," Farrell says.