Accessibility links
In Memoriam: Sir Fazle Hasan Abed Brought Help (And Hope) To The World's Poorest : Goats and Soda He was an accountant for Big Oil. Then came the cyclone of 1970. Sir Fazle Hasan Abed found a new calling — and came up with an idea that could be key to ending extreme poverty.

In Memoriam: The Most Influential Poverty Fighter You've Never Heard Of

In Memoriam: The Most Influential Poverty Fighter You've Never Heard Of 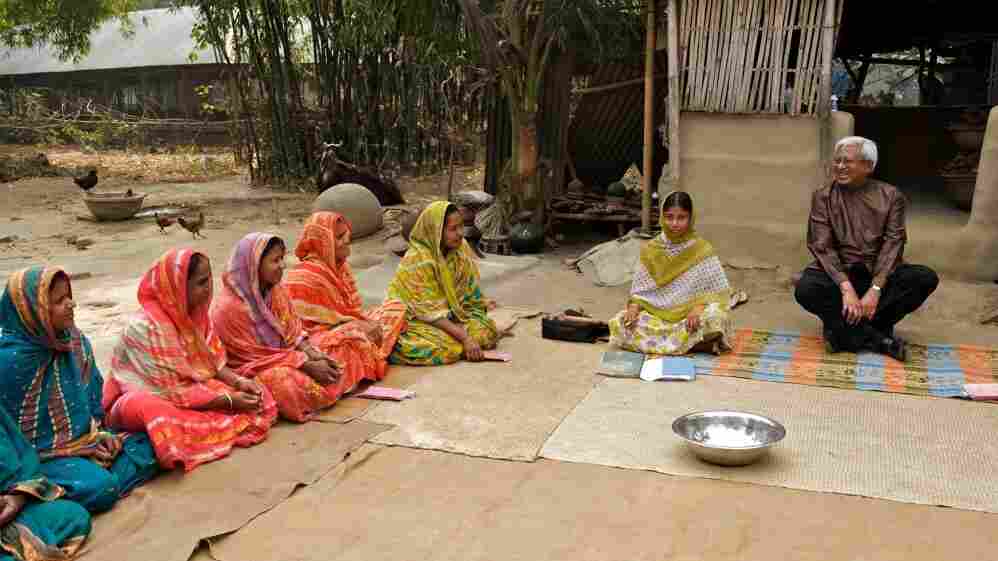 Sir Fazle Hasan Abed quit his job at Shell Oil more than 40 years ago to focus on helping the ultra-poor, like these women in a village in Bangladesh. Courtesy of BRAC hide caption 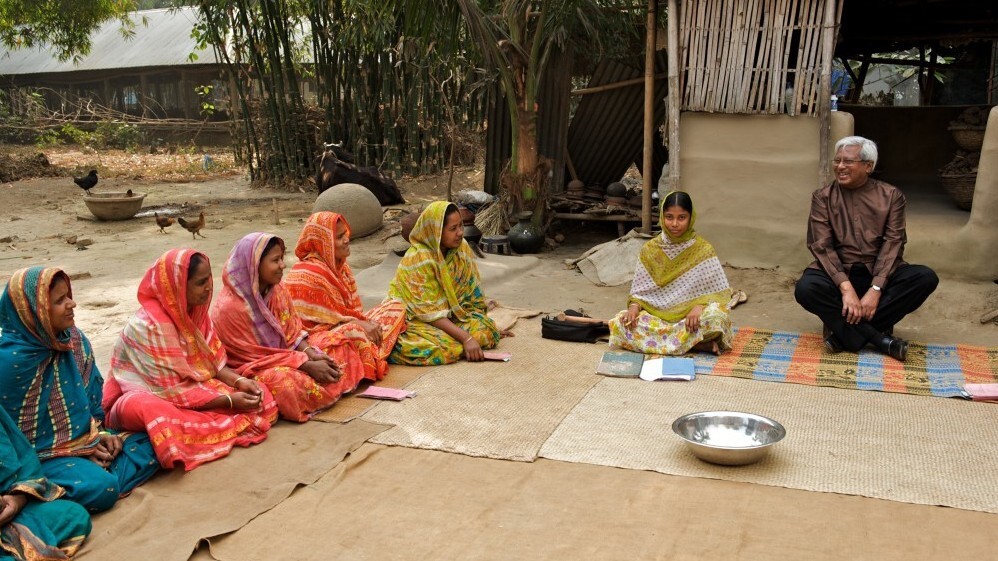 Sir Fazle Hasan Abed quit his job at Shell Oil more than 40 years ago to focus on helping the ultra-poor, like these women in a village in Bangladesh.

Editor's note: Sir Fazle Hasan Abed is the award-winning founder of one of the largest nongovernmental aid groups in the world. It's called BRAC, and it operates in 11 countries across Africa and Asia. On Friday Abed's colleagues at BRAC announced that he has died. He was 84 and was being treated for a brain tumor. In 2016 NPR interviewed Abed. In his memory we are re-posting that story.

He's a Bangladeshi who's been knighted by the Queen of England. A former accountant who left an executive position at Shell Oil to devote himself to the world's poorest. And when it comes to eliminating poverty, he may be the most influential man you've never heard of. Meet Sir Fazle Hasan Abed, founder and head of a nongovernmental international development organization called BRAC. Today the University of Michigan honors Abed, who is 80, with its Thomas Francis Jr. Medal in Global Public Health.

We took the occasion to find out more about what he's learned during his 40 years in the field — and how one of his ideas might end up driving the 21st century global effort to eradicate extreme poverty.

Today BRAC is one of the world's largest anti-poverty NGOs — with 115,000 employees in 12 countries offering some 138 million people services including education, micro-loans, job training and health care. But Abed's ambitions were modest when he started the group that would become BRAC back in 1970.

A cyclone had just hit Bangladesh — then still known as East Pakistan — killing more than 300,000 and leaving many more homeless. Abed was an accountant by training and says his own family had been comfortably off. But "growing up in rural Bangladesh I had seen poverty all around me and it had always affected me to see it." Now, at the sight of so much death and suffering wrought by the cyclone — there were corpses floating in the bay — "I was really shaken." So he started a group of about two dozen volunteers to help people rebuild. Within months it morphed into a more permanent effort as East Pakistan became embroiled in a war to secede from Pakistan, and, by 1972, achieved independence as Bangladesh. 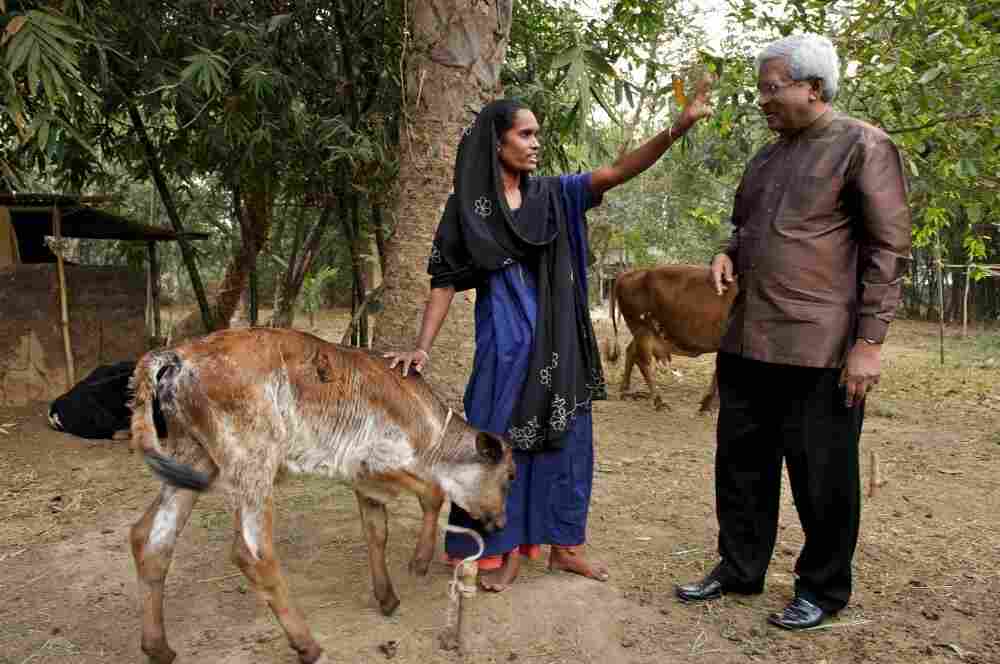 Abed meets with a Bangladeshi villager who was given a cow as part of BRAC's "graduation program." Courtesy of BRAC hide caption 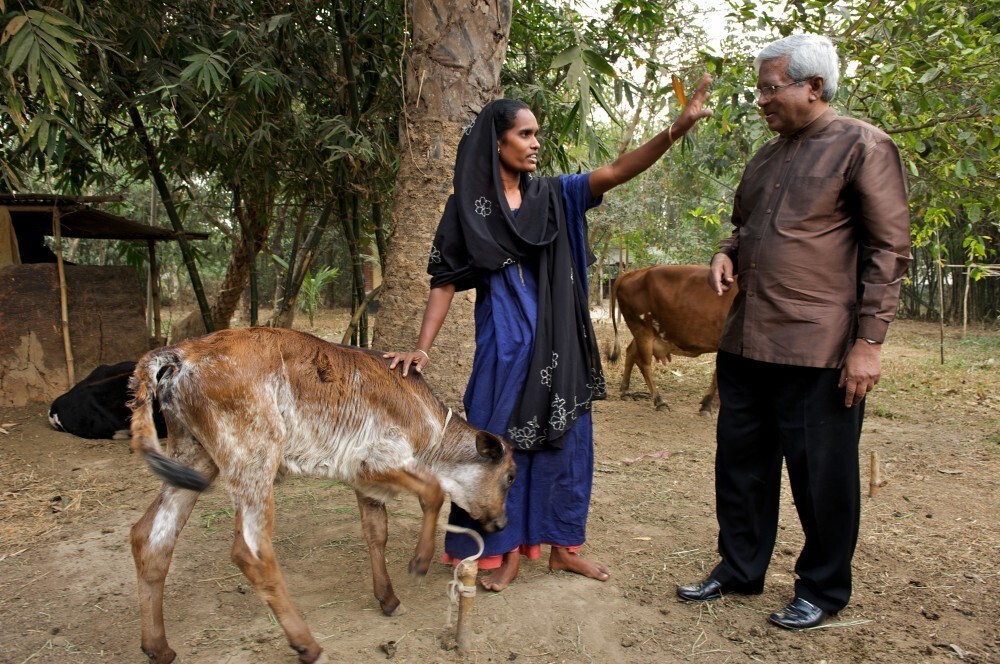 Abed meets with a Bangladeshi villager who was given a cow as part of BRAC's "graduation program."

"There were 10 million refugees starting to go back to Bangladesh and I decided it's time for me to help independent Bangladesh," Abed recalls. He quit his job at Shell and sold a house that he owned in the UK to raise the money to pay a small staff of full-time employees. Initially he named his new organization the Bangladesh Relief Assistance Committee. But he soon decided it was not enough to focus on rebuilding from the cyclone and the war. "You know people were so poor I decided I would have to commit myself for the long haul to get poverty reduced in Bangladesh." So he renamed the group the Bangladesh Rural Advancement Committee.

Among his early goals was to tackle the extraordinarily high rate of infant and child mortality in Bangladesh — almost one-fourth were dying before their fifth birthday. One of his greatest successes was a push from 1986 to 1990 to expand childhood immunizations. With funding from a range of sources including the British and Australian governments, says Abed, over those four years alone BRAC helped increase the share of children who were vaccinated against, for example, tuberculosis from 4 percent to 91 percent.

During the 1990s, BRAC also began experimenting with an approach that would ultimately come to define it: the "graduation program." BRAC coined the phrase because the aim was to help the ultra poor permanently "graduate" from their state of extreme poverty into a more stable economic level.

The idea is to give an extremely poor family an asset — say a cow or a goat or bees — that can increase its income over time. BRAC is hardly the first group to use this model; another prominent one is Heifer International. But BRAC combines the donation with a mix of services that has proved highly effective — including training and coaching on how to use the asset, cash grants to tide the family over while getting a new enterprise started, and help with health care and education.

Over time, the organization also vastly expanded its reach to countries beyond Bangladesh — renaming itself once more as just "BRAC." Today its graduation model is one of the few whose effectiveness has been established through rigorous testing using randomized controlled trials, meaning researchers compared the income and well-being of people served by the graduation program with otherwise similar people who did not.

Last May, for instance, Science published the findings of a major randomized trial studying more than 10,000 people in six countries. In five of those countries, those who got assistance modeled on BRAC's graduation program made a little more money, had more to eat and had better mental health than those who did not a year after the program was over. (It's worth noting that the improvement in incomes and food consumption together was not huge — on average a 5 percent boost).

A more recent evaluation, released late last year by researchers at the London School of Economics and supported with funding from BRAC, analyzed the impact of a graduation program directly administered by BRAC for nearly 7,000 ultra-poor families in Bangladesh. Those results were even more impressive: Four years later their incomes were 37 percent higher than in the control group. And the impact seven years on was at least as large.

Abed hopes more NGOs and governments adopt the graduation model. BRAC has published a detailed guide and "tool kit" to help others create their own versions of the program. And it has hosted visitors from the governments of Tanzania and Kenya as well as officials from the United Nations who are interested in learning more.

But most important, says Abed, will be to find ways to reduce the cost of BRAC's graduation model. Right now it's about $500 per family in Bangladesh. "I think many people in government are going to look for answers that are slightly cheaper," he says. So BRAC plans to spend the next several years studying the impact of expense-cutting measures: What happens if you reduce the number of visits by the coach who teaches the family how to get income from its cow, for example?

"The question is, what is the trade-off?" he says. "Suppose eliminating costs by half makes the success rate go down by 10 percent. Well, that might be worth taking."

But if this makes Abed sound like a pragmatist, he insists he's as idealistic — and optimistic — as ever about the chances for lifting the poorest out of misery. After all, he says, he only needs to think back to how things looked in Bangladesh in 1970. "I've seen such major changes. I don't ever despair."