Accessibility links
A $250 Surgery Can Save A Baby's Life In A Country Where A Cleft Is Considered A Curse : Goats and Soda The reason: He was born with a cleft, considered a curse in Ghana. His life was saved by a stroke of luck.

When Kodjo Was Born, They Decided He Should Be Drowned

When Kodjo Was Born, They Decided He Should Be Drowned 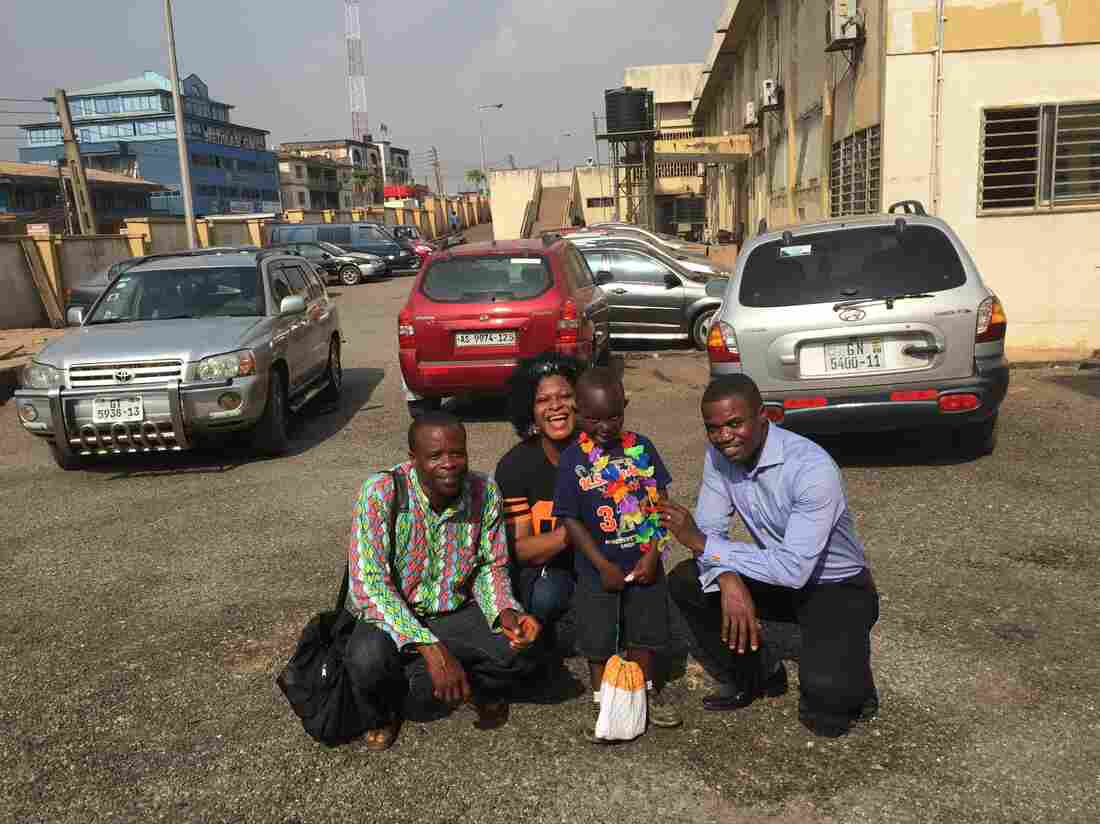 Kodjo, who's 4, was born with a cleft and doomed to be drowned — until Dr. Solomon Obiri-Yeboah, in the blue shirt, performed surgery to correct the birth defect. Also in the photo: Kodjo's guardian (in the bright patterned shirt) and Nkeiruka Obi, West African regional director of Smile Train. Courtesy of Smile Train hide caption 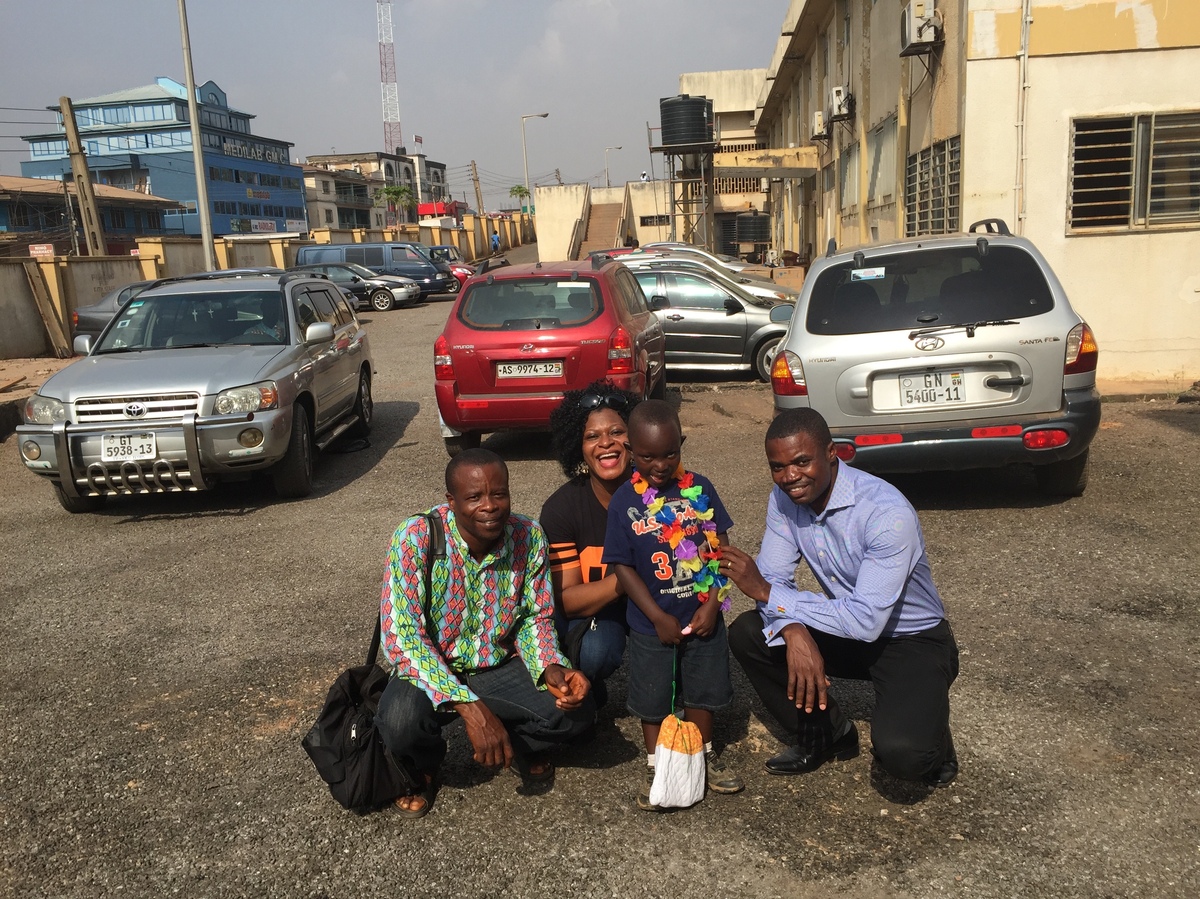 Kodjo, who's 4, was born with a cleft and doomed to be drowned — until Dr. Solomon Obiri-Yeboah, in the blue shirt, performed surgery to correct the birth defect. Also in the photo: Kodjo's guardian (in the bright patterned shirt) and Nkeiruka Obi, West African regional director of Smile Train.

The day Kodjo was born four years ago in a small village in eastern Ghana, his mother was given devastating news: Her baby boy was a river god's son, and the elders of the village said he would need to be sacrificed.

The reason she was told this? He had gaps in his face.

So she was shut inside a room while arrangements were made for her son's drowning. It was only by a stroke of luck that another villager heard of these plans and told the family that what the boy really needed was medical care. Those gaps weren't caused by a curse but, rather, a cleft.

There's an incredible amount of stigma associated with the birth defect in Ghana, explains Dr. Solomon Obiri-Yeboah, a specialist who operated on Kodjo at the Komfo Anokye Teaching Hospital in Kumasi. Clefts are relatively common problems worldwide — according to research published in 2013, they occur in somewhere between 1 in 500 and 1 in 2,500 births, depending on the babies' background. (In the U.S., clefts are the fourth most common birth defect.)

But the condition, which is caused by mouth tissue not fusing properly early in pregnancy, has been a taboo topic in Ghana, particularly in the country's rural areas, Obiri-Yeboah says. Children born with clefts are routinely killed at birth or rejected by their communities. They're often not sent to school or allowed to participate in social activities. Even after Kodjo's successful surgery, his family would not accept him, says Obiri-Yeboah, who now takes care of the boy financially. His father does not see him; his mother gave him up but visits once in a while.

"There are so many stories," says Dr. Peter Donkor, who returned to Ghana in 1995 after training as a maxillofacial surgeon in Australia and founded the Kumasi cleft clinic. He speaks of another baby who arrived for treatment and was abandoned. "His parents feared the child would attract witches to the village," Donkor says.

Donkor has dedicated his career to rewriting the endings of these stories by training other specialists to tackle surgeries and by pushing for increased awareness both of cleft causes and of medical options. It's important to reach children as quickly as possible because cleft deformities interfere with speech acquisition. Palate surgery is ideally performed by 12 months, Donkor says. If not, a person with a cleft may "speak like a ghost." (That's how Ghanaians refer to the nasal, distorted quality of the speech, he says.)

For poor families, the cost of surgery, transportation and rehabilitation can be overwhelming.

That's why Donkor founded the Ghana Cleft Foundation, which solicits donations from individuals and organizations to help cover these expenses. One of its partners is Smile Train, an international nonprofit that pays for cleft surgery in developing countries using contributions from people swayed by its message: "How often do you get to save a child's life for $250?" That's how little a cleft surgery can cost, according to Smile Train.

Even when the price is higher, it's still an investment that helps restore dignity to people's lives, Donkor says. And according to a new study in the World Journal of Surgery — "Economic Valuation of the Global Burden of Cleft Disease Averted by a Large Cleft Charity" — it's also one that provides a significant boost to the world economy.

Although Ghana offers an extreme example of what happens to babies born with clefts, it's not the only place where the defect can determine the course of a person's life. When study co-author Scott Corlew, a cleft surgeon, worked in Nepal, he saw 4-year-olds who couldn't speak and 12-year-olds who'd never been to school.

"It's a problem that totally removes someone from society," Corlew says. "No one can understand what you say, and some family member has to take care of you." As he describes it, cleft is "the ultimate poverty trap."

Once a child has surgery, however, the future looks strikingly different. That child can get an education, participate in society and get a job. By mining Smile Train's database to look at more than half a million surgeries in 83 countries over a 10-year period, and crunching the numbers, Corlew estimates the resulting economic productivity boost was at least $3 billion.

A growing chorus of voices has been working to highlight the importance of making surgery available in the developing world. Vaccines, HIV drugs and clean water are all critical. But you can't have a "strong, robust health system" without surgery, says Stanford University School of Medicine researcher Thomas Weiser.

Unfortunately, there are huge disparities in who has access to these services. Weiser is lead author of a study just published online in the Bulletin of the World Health Organization. It found that although the number of surgeries being performed globally is soaring, developing countries lag far behind wealthier ones. There were an estimated 313 million surgeries performed in 2012 — and just 6.3 percent of these were in the poorest countries, despite the fact that they're home to more than a third of the world's population.

This is problematic for many reasons, Weiser says, including the economic effects. When someone who needs surgery — whether for cleft or traumatic injury — doesn't get it, that can result in a major financial drain on a community.

The argument for making surgery more of a priority is having an effect, Weiser says. In the past decade, rates have risen sharply. But there's still a lot of work to be done to make sure operations are done safely, he notes.

One person who might be able to help with that: Kodjo, the 4-year-old who was saved by cleft surgery.

"I am looking at helping him go as far as he can go," Obiri-Yeboah says. "Because I am a doctor, they call him doctor in his community. If you ask him now, he wants to become a doctor."