Accessibility links
When A Goat Walked Into A Starbucks, Why Did It Eat Cardboard Instead Of Drinking Coffee? : Goats and Soda And it didn't drink any coffee but it LOVED the cardboard! Until a police officer took the goat into custody.

So A Goat Walked Into A Starbucks ...

So A Goat Walked Into A Starbucks ... 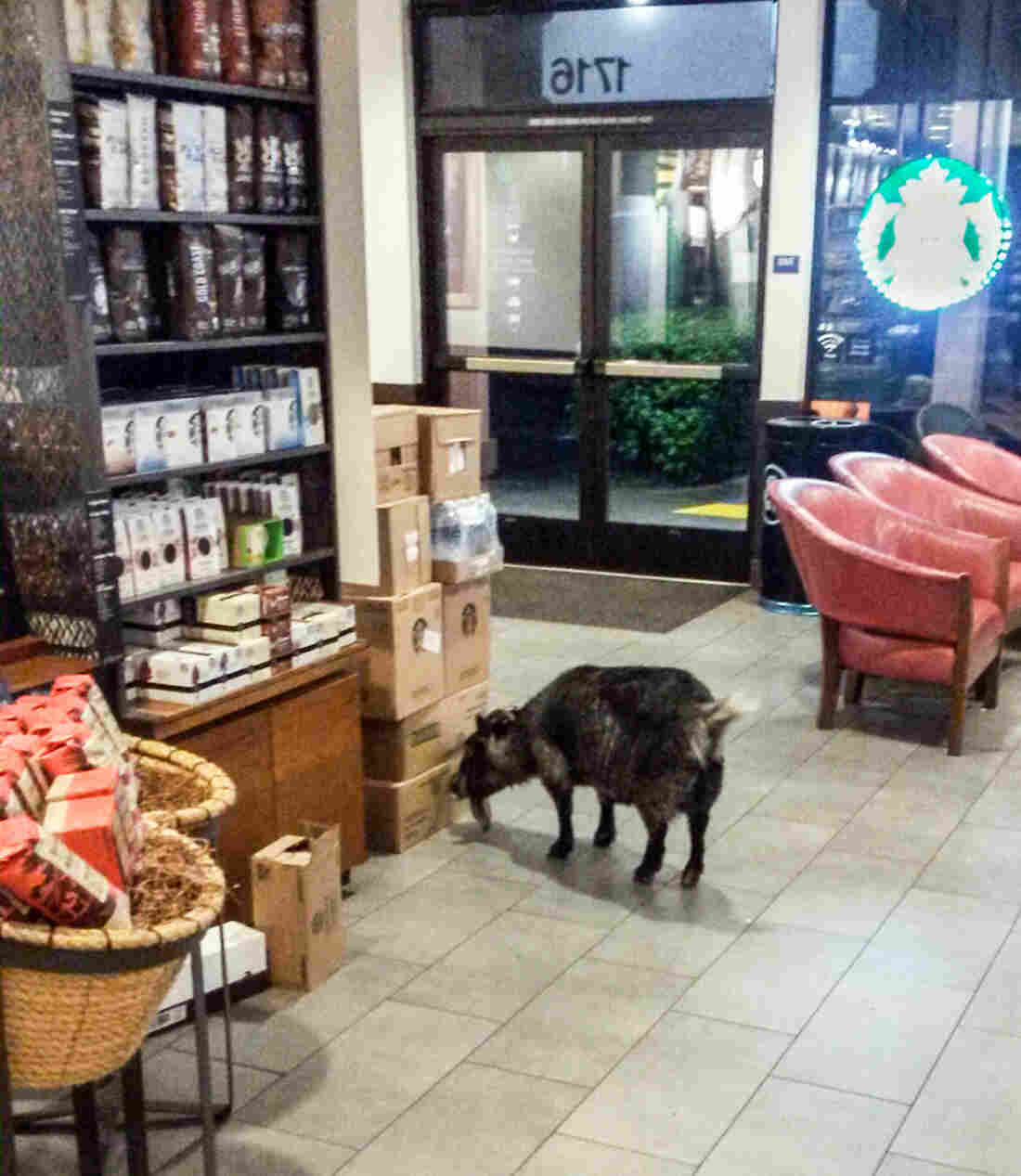 The goat did not order a latte. But when it escaped from home and entered a nearby Starbucks in the Northern California town of Rohnert Park, it did have a hankering for cardboard. Sgt. Rick Bates/Rohnert Park Department of Public Safety hide caption 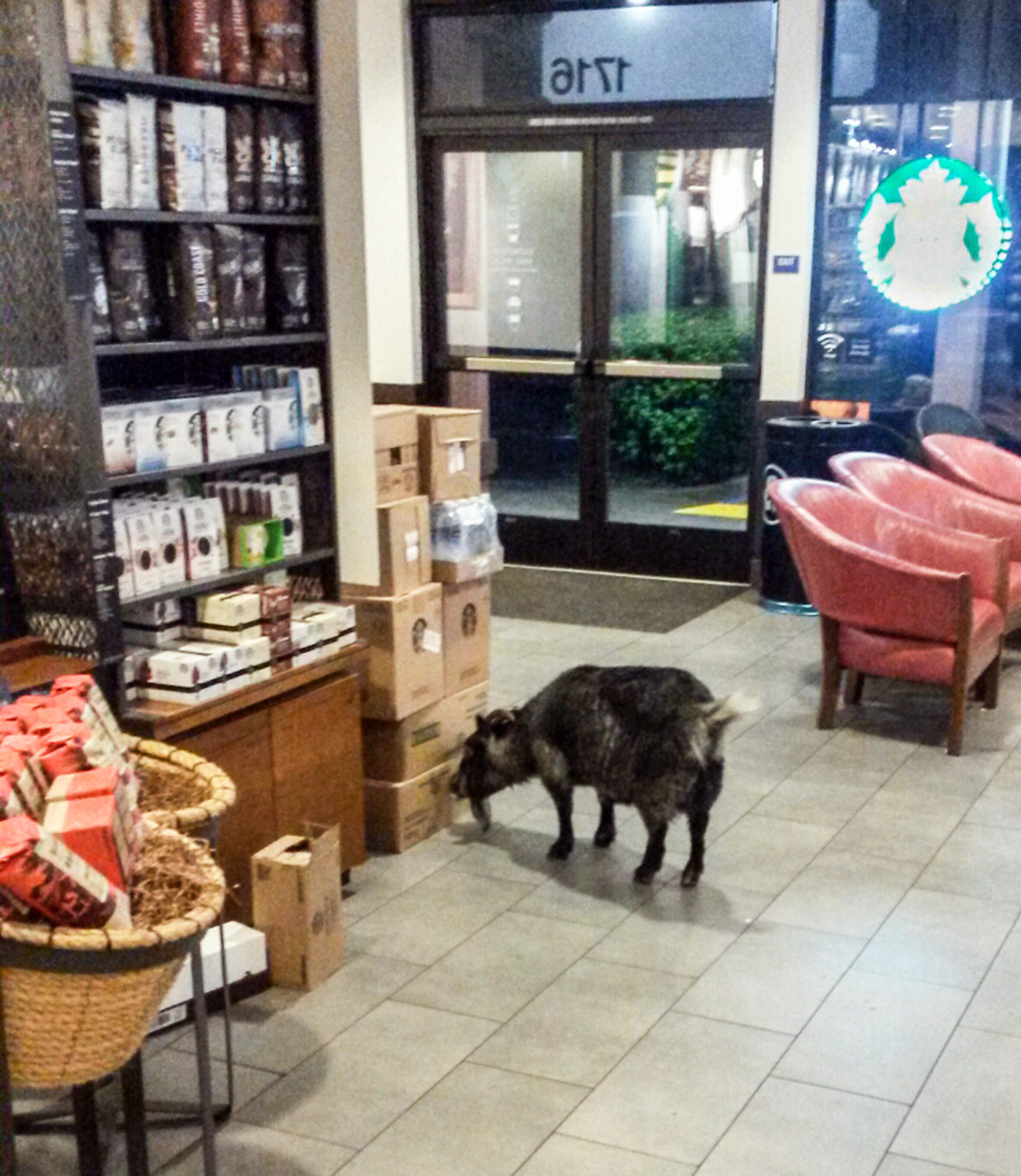 The goat did not order a latte. But when it escaped from home and entered a nearby Starbucks in the Northern California town of Rohnert Park, it did have a hankering for cardboard.

It sounds like a joke. A goat walked into a Starbucks ...

It happened a couple of days ago in Rohnert Park, Calif., when a goat whose name is Millie somehow got away from her home and ambled over to the nearby strip mall. Employees dangled a banana in front of the goat in the hope of apprehending her, but she preferred to chew on a cardboard box. Police officers took the ruminant to an animal shelter, where her owner reportedly reclaimed her.

So, here at Goats and Soda, we knew it was time to talk to one of our favorite goat experts, Susan Schoenian, a sheep and goat specialist at the University of Maryland Extension, to probe the goat's behavior.

With all the good things to eat in a Starbucks, why would a goat chew on cardboard?

You can feed livestock cardboard. It's a source of fiber. I won't say it's routinely done, but over the years I've been reading about alternative feed sources. One of the great things about a ruminant animal is we can give 'em stuff to get rid off, byproducts. Cardboard is one of them. So she probably liked it.

Any other surprising things being fed to goats and other livestock?

There's a lot of pine bark in the Southeast. Because it has tannins in it, it appears to have an inhibitory effect on parasites. And you know how we put dates on food so you have to throw it out even though [there may be] nothing wrong with it. I remember reading a study about feeding potato chips and other food whose dates had expired to livestock.

But isn't that junk food?

So was that the goat's goal in eating cardboard? To get a balanced ration?

As far as why goats eat it, they're eating out of curiosity or mischievousness or whatever you want to call it. It's something fun to nibble.

If you eat rice cakes, you eat [the equivalent of] cardboard — they're just filler.

It's unusual to have a goat wandering around a shopping area in the U.S., but in some countries it's pretty commonplace, right?

I just did a consulting job in Jamaica and in the city and towns, goats are everywhere. They just walk nonchalantly down the street. The joke is they will stop at the cross light.

And they're not afraid to mingle with people?

Did you discover any other interesting goat stories in Jamaica?

People steal goats from farms and sell them. So the owners have to pen 'em every night, and even then it's a real problem. We call it rustling; they call it praedial larceny. [The thieves] will put the meat in the market at a lower price. Sometimes if you catch [a goat thief] and they go to court and don't get much of a punishment, they come out and they kill the goat's owner.

So wouldn't that mean it's dangerous for goats to walk the streets alone?

Breaking News: Goat Locked In A Car In A Parking Lot Drinks A Soda

The Starbucks goat didn't order a latte, but do we know anything about how caffeine might affect a goat?

I'm sure they've done research, although I don't know of any. I would think caffeine would have a similar effect [as it would on people]. The goat won't be able to sleep at night, would get hyper — although goats don't need anything to get hyper!