Accessibility links
In Her Memoir, Disease Detective Dr. Mary Guinan Tells How She Fought Bias — And Stupid Questions : Goats and Soda In a new memoir, Dr. Mary Guinan reflects on 40 years as a disease detective for the CDC.

Listen · 7:10 7:10
The Epidemiologist Who Crushed The Glass Ceiling And Media Stupidity 7:10 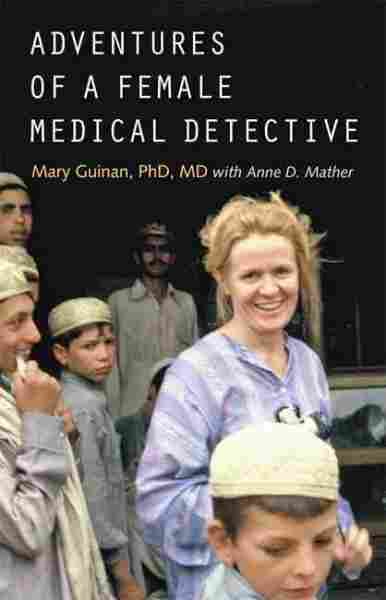 Adventures of a Female Medical Detective

In Pursuit of Smallpox and AIDS

When they wouldn't hire her because she was a woman, she threatened her superiors. When the media asked her a stupid question, she gave them an earful. And when she thought she had contracted HIV/AIDS, she said, "if that's what happened, that's what happened."

Don't mess with the tenacious Dr. Mary Guinan. A 40-year veteran of epidemiology, she was one of the first female physicians to work on smallpox eradication at the Centers for Disease Control and Prevention and one of the first doctors to work on the AIDS epidemic. She did all of this during a time that did not favor women in the medical field.

In a new memoir, Adventures of a Female Medical Detective, Guinan tells stories of her experiences in controlling outbreaks, researching new diseases and caring for patients with untreatable infections around the world.

Guinan, based in Reno, Nev., is a professor of epidemiology and community health at the University of Las Vegas' School of Community Health Sciences. This interview with NPR's Michel Martin has been edited for length and clarity.

You started your career at a time when only 10 percent of medical graduates were women. What attracted you to this?

I really wasn't attracted to epidemiology. I was an internal medicine resident, and I thought I was going to be a hematologist. But I started to get worried that I didn't want to do that. I read about a wonderful new program to eliminate smallpox in the world. This would be the first time in history that a disease would be eradicated [by] the design of people. I wanted to be part of that.

The Centers for Disease Control was the agency liaison with the World Health Organization in the U.S., so the people volunteering for the smallpox eradication program were at the CDC, and most of them were coming out of this program called the Epidemic Intelligence Service.

I applied to be an EIS officer and I was accepted in the class of 1974. I was the only woman physician in a class of 39 physicians, then volunteered for the smallpox eradication program and eventually got accepted and went to India.

In fact, you had applied many, many times and they wouldn't take you.

They told me first that the WHO wasn't taking women, and then I said, "Well, can I appeal?" They said, "It's a done deal. Women aren't being taken by the WHO."

They kept asking volunteers to go to India — "It's really important, we need to wipe out smallpox in India." I applied again and they said, "It's really not the WHO that's keeping women out, it's India. India says no women in the smallpox program." I said, "Can I speak with the director of the EIS program?"

I asked him, "You know the prime minister of India is a woman. Does she know you're banning women American physicians from entering the smallpox eradication program?" And he said nothing. I said, "Well, should I write to Indira Gandhi directly, or should I write to the embassy of the United States and ask them to rescind this ban?" He said, "I'll get back to you."

The next week, without any explanation, I was accepted into the smallpox eradication program.

Would you talk a little bit about your time there? What stands out?

It was unbelievable. Where we were was a remote area with a 99 percent illiteracy rate, up near Nepal and Uttar Pradesh. The women had never seen a foreign woman before.

People would come out and stare at me. The women always wanted me to come out to their mud huts and talk to them. Unfortunately, I had a male interpreter with me all the time, and they wouldn't allow him in the hut. They insisted I come in anyway, and they would pat my stomach and ask me where my babies were. It was so sweet. I always knew the women would be cooperative with me [about smallpox vaccinations] because they found me interesting.

You were working with the sexually transmitted disease unit in the early days of the AIDS outbreak. Did you feel that there was a stigma to that work back then?

I can tell you it was unusual for a woman to be working in the area of sexually transmitted diseases. People would say to me, why would you do that? Why would you be in such a specialty? Do you have this interest in looking at people's genitals? Well, is that what you would say to OB/GYNs? To urologists? Why would you think they were perverted?

What did your mother think of your line of work?

My mother was very proud of me at the CDC. She didn't know I was working in sexually transmitted diseases.

I was asked to be interviewed by 60 Minutes, and I refused to go on there because I thought it would be another crazy interview where people would accuse me of doing something unusual or something that perhaps was a little off-base for a physician. They called the White House and asked, "Why is Mary Guinan not going on our program? [Is she] covering up the herpes epidemic?" — which is what I was working on at the time.

The head of CDC called me and said, "Mary, you know, I understand that you have refused to go on 60 Minutes, but I think you should think that over again," so I said I would go on.

I told my mother I was going to be on 60 Minutes, and she told everyone at her church, our relatives in Ireland. I started worrying and sweating about not what 60 Minutes might do to me but what my mother would think!

The opening question was, "Dr. Guinan, what venereal disease would you least like to have?" It went downhill from there. I talked about syphilis and gonorrhea and oral-genital sex and a number of other things. After the show, I got a phone call from my mother and she said, "Congratulations, dear, your hair looked very nice."

She said, "[You] go girl," as far as I was concerned. So if my 70-year-old mother could deal with me as an STD expert, I didn't care what anyone else really thought after that.

Were you ever afraid?

I received an AIDS needle stick at one point in my life and thought I had AIDS. But fortunately, I did not.

Weren't you terrified? This was at a time when doctors weren't sure about how AIDS was spread. Two years later, you found a lesion in your arm where you were stuck by the needle. You had just given birth. When your assistant heard you had HIV, she quit on the spot. How did you deal with all of that?

It was a very difficult time. In the early days, when I spoke to anyone about AIDS, people might take two steps backward.

At the CDC, the STD division was unusual in that we had clinical practice, so I saw patients on a regular basis. I saw what everyone was going through. I said to myself, "If that's what happened, that's what happened." But my greatest fear was that my child might be infected, and fortunately, he wasn't.

One of the interesting things about the book is your low opinion of the news media, at least in the early days of the AIDS epidemic. You talk about the price of misinformation.

For example, CNN called to ask your opinion on the controversy of women workers at an insurance company in Chicago. They were picketing the company because they had to use a bathroom with only one toilet, and the women believed that one of their co-workers had AIDS. They were convinced that they were at risk of contracting AIDS from using the bathroom.

CNN persisted and the CDC wanted you to talk to them even though you didn't want to. Do you remember what you said when the reporter asked if you were sure you couldn't catch AIDS from a toilet seat?

Yes, I do: "The only way that I know you can get AIDS is if you sit on it before someone else gets up."

You said you never saw the news clip, but you've often seen that quote in a slide in medical meetings. Someone said that line would be your epitaph. But if you could pick, what would you want your epitaph to be?

"She was right about public health."