Accessibility links
Just In Time For The Passover Seder, Readings And Rituals That Tie The Ancient Refugee Trek To 2016 : Goats and Soda That's not one of the four questions asked at the Seder, but it's a good question — and there's a timely answer.

Why Is This Passover Different From Past Passovers?

Why Is This Passover Different From Past Passovers? 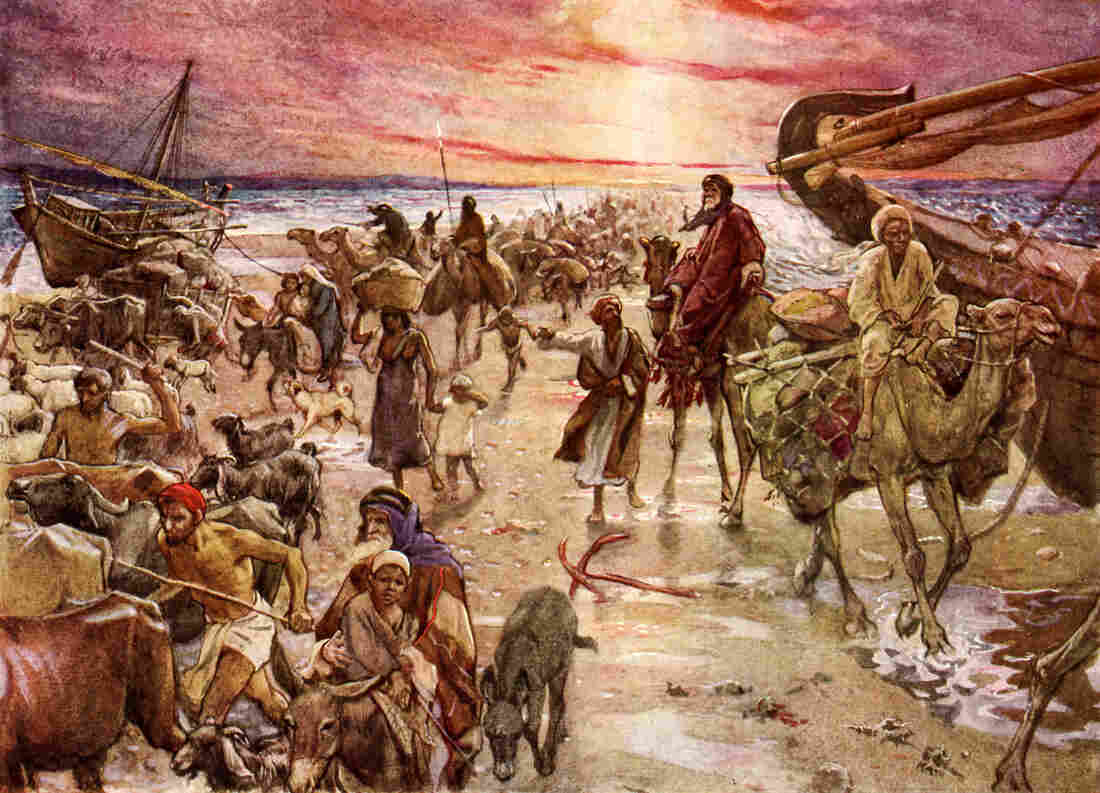 The Passage of the Red Sea, illustration by William Hole (1846-1917). Exodus 14:16: "but lift thou up thy rod, and stretch out thine hand over the sea, and divide it: and the children of Israel shall go on dry ground through the midst of the sea." Corbis Images hide caption 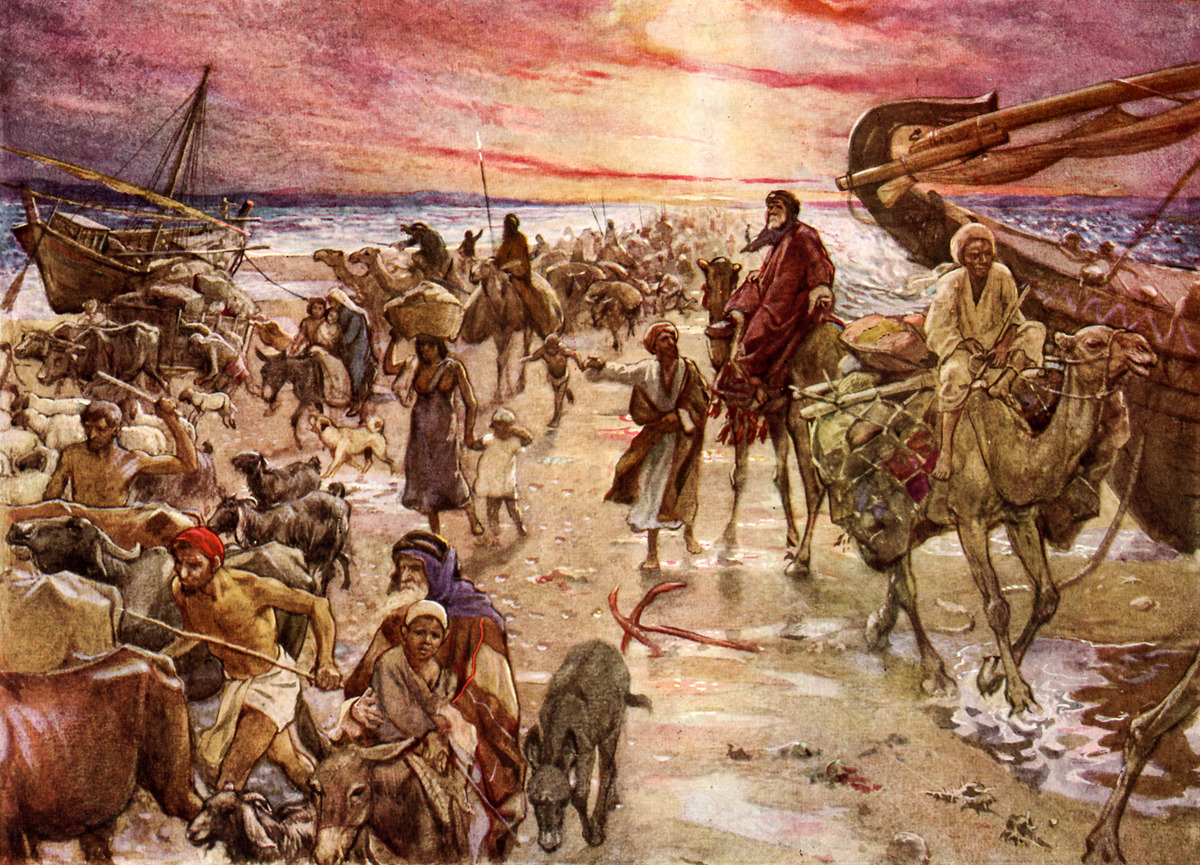 The Passage of the Red Sea, illustration by William Hole (1846-1917). Exodus 14:16: "but lift thou up thy rod, and stretch out thine hand over the sea, and divide it: and the children of Israel shall go on dry ground through the midst of the sea."

Why is this Passover different from any other? Because the story that the Jewish holiday commemorates — the exodus of the ancient Israelites from slavery in Egypt to freedom — resonates more strongly than ever in a world embroiled in a refugee crisis that encompasses approximately 60 million people, the highest number ever recorded, according to United Nations statistics.

So when Jews retell that story at the first night's traditional festive Seder, "these are not ancient, crumbling dusty issues that don't have relevance today," says Rabbi Eric Greenberg, a spokesman for the Multifaith Alliance for Syrian Refugees. "We can see this is actually happening now to many people, including the Syrian refugees."

It's a connection that resonates for Shadi Martini, 44, himself a Muslim Syrian refugee who now lives in Farmington Hills, Mich. A hospital manager in Syria, he had to start over after leaving in 2012. In the U.S., he began supplying humanitarian and medical supplies to those in need in Syria.

"We worked with everyone who offered help, and some NGOs were from Israel, and that was a big surprise," says Martini, who is currently senior Syria adviser for the Multifaith Alliance. In Syria, which is in ongoing conflict with Israel and today has only a tiny Jewish population, he had no exposure to Jews. It was also a surprise to learn that welcoming and coming to the aid of the stranger "was a pillar of the Jewish faith," he says.

In Freedom Seder, Jews And African-Americans Built A Tradition Together

The connections between the journey of the ancient Israelites and of refugees today are being emphasized in online readings from American Jewish World Service, whose mission is to end poverty and promote human rights in the developing world, and HIAS, formerly known as the Hebrew Immigrant Aid Society, a nonprofit that focuses on protecting and aiding refugees around the world.

Why should we add readings? Because the stories of today's refugees echo the long history of Jewish stories of being expelled throughout history, says Ruth Messinger, president of AJWS. That history includes being forced from Spain in 1492 and from Nazi Europe in the 1930s. All these instances, past and present, have to do with "individuals and groups asserting their rights to be and live where they are" and remind us of times and places "where the government is saying we will deprive you of the rights that other people in this country have." When the Haggadah, the text that is read at the Seder, instructs us to remember that we were strangers in a strange land, she says, that means it is "our responsibility" to reach out to refugees in need.

What are the modern-day plagues? The Haggadah lists the 10 plagues visited upon Egypt as the Pharaoh refuses again and again to let the Israelites go. To provide insight into the what displacement means today, the HIAS supplement lists "10 Plagues Facing Refugees in the U.S. and Worldwide." The list — which includes violence, dangerous journeys, poverty, lack of access to education, anti-refugee legislation and loss of family — is accompanied by facts and figures.

Have we done enough? Another seder favorite is the song Dayenu, whose refrain proclaims that any single one of the miracles that led, step by step, to the exodus would have been dayenu — Hebrew for "enough." "It's a great lyric" that speaks of gratitude and appreciation, says Messinger. The AJWS version provides a different twist, which acknowledges that in addition to appreciating what is being done, there is still more work ahead. One verse goes, in part:

If the world responds only to the cries of the wounded, but does not stay to help them heal... It will not be enough.

However, if we sustain our support until stability, peace and independence have been attained...Dayenu! Then it will be enough.

Why is there a pair of Nikes on your doorstep? In a new ritual, HIAS asks Seder participants "to place a pair of shoes on the doorstep of your home to acknowledge that none of us is free until all of us are free and to pledge to stand in support of welcoming those who do not have a place to call home." This acknowledges that "we have stood in the shoes of refugees, and as we're celebrating our freedom we are committing to stand with today's refugees, and take a stand," says Rabbi Jennie Rosenn, vice president of community engagement at HIAS. You can choose your own moment to place shoes at the door, but one possibility is at the Haggadah passage that reads, "My father was a wandering Aramean." This suggests "the essence of the Jewish experience: a rootless people who have fled persecution time and time again," says the HIAS supplement. "When we recite these words, we acknowledge that we have stood in the shoes of the refugee."