Accessibility links
Who Are The Bravest Defenders Of Our Planet? Chances Are You've Never Heard Of Them : Goats and Soda Why the world's poorest people are some of the most effective — and vulnerable — environmental activists. 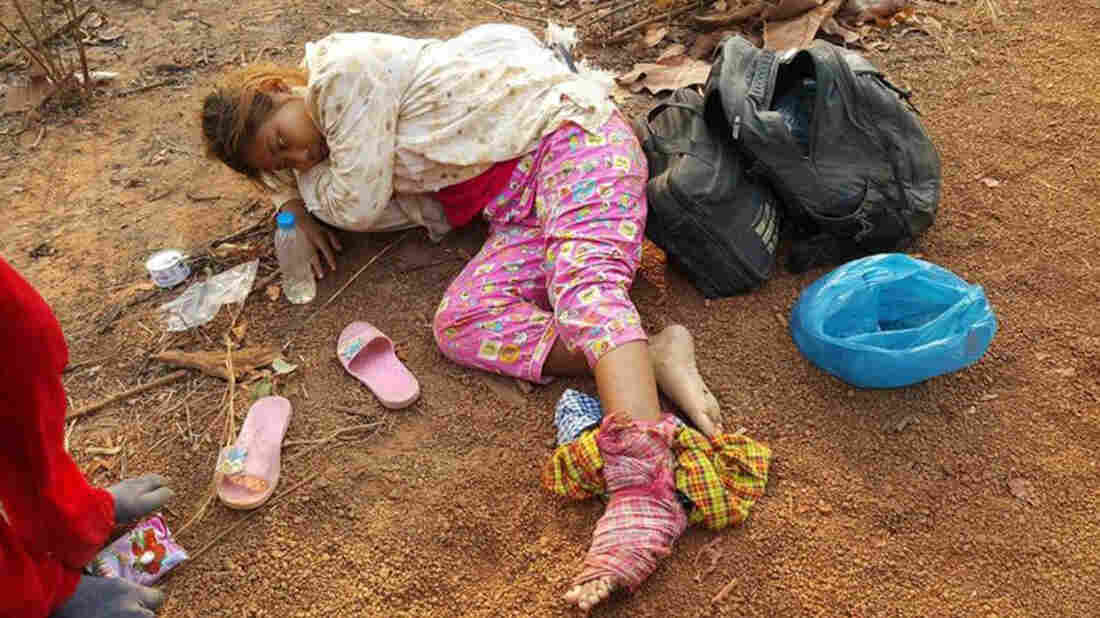 Phan Sopheak, a rice farmer in Cambodia, rests shortly after a man wielding an axe attacked her. She had been patrolling the Prey Lang forest around her village with a volunteer group that is trying to stop illegal logging. Courtesy of Prey Lang Community Network hide caption 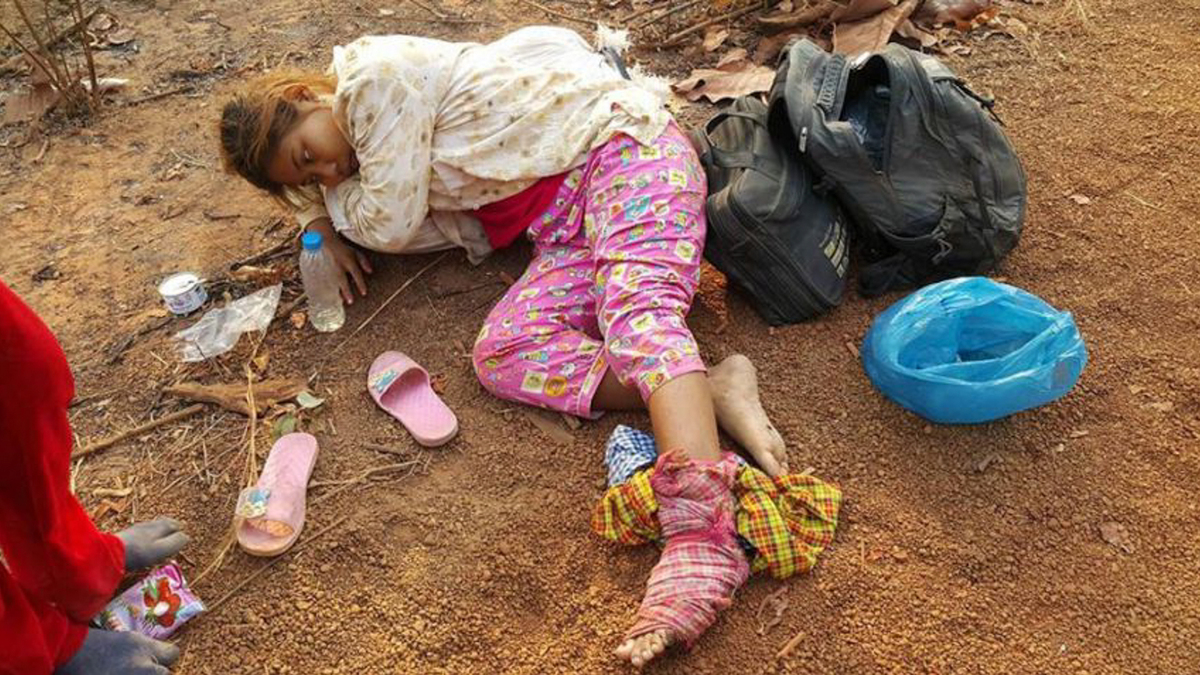 Phan Sopheak, a rice farmer in Cambodia, rests shortly after a man wielding an axe attacked her. She had been patrolling the Prey Lang forest around her village with a volunteer group that is trying to stop illegal logging.

World leaders have celebrated Earth Day today by gathering in New York to sign a historic climate agreement to reduce greenhouse gas emissions. But some of the most vital environmental work is being done by ordinary citizens with extraordinary courage. People like subsistence farmers and tribal leaders in the poorest countries are standing up to some of the world's most powerful industries. And a growing number of them have been attacked — and sometimes murdered — for trying to protect the environment.

Among the latest casualties is Phan Sopheak, a rice farmer in Cambodia. Every few weeks, she heads deep into the woods around her village — a vast forest called Prey Lang. She goes with a volunteer patrol on the lookout for illegal loggers who've been rapidly stripping Cambodia of its canopy.

"When I walk in the forest and I see giant trees that they've cut down, it makes feel me so sad that they've just cut and thrown them out," she says. "And I know that when all the forest is gone, the water will also dry up."

When she and the other patrollers — who are part of a group called Prey Lang Community Network — come across loggers, they don't just urge them to stop — they confiscate their chain saws and timber. It's led to angry confrontations.

"They've said things like, 'If you burn my wood, I will burn your house,' " she says.

One night last month, it got scarier. The patrol had bedded down for the evening in the forest. Phan, who is 25 and petite, was sleeping in her hammock when she was awoken by a painful crash: her motorbike, parked next to her, had toppled onto her. A man with an axe was running away. Phan looked down at her foot and realized he had hacked into it.

"The veins and the bone were cut into," she says. "And there was so much blood. When I stood up, I fainted."

When she came to, Phan says her first thought was of her parents. She belongs to an ethnic minority — called the Kuy — one of the hill tribes that's lived in the area for generations. Her family relies on her to work. And this injury looked so debilitating. What were they going to do?

Billy Kyte tracks attacks of this type for the advocacy group Global Witness. Increasingly, he says the heroes of the environmental movement fit Phan's profile.

"These people are at the front lines of the battle to save the environment," he says. And ever more of them are paying with their lives.

In 2014, the most recent year for which his group has released statistics, 116 people doing such work were killed. They included professionals such as lawyers, investigative journalists, leaders of NGOs. But, notes Kyte, "a shocking 40 percent of those killed were indigenous peoples. Many are living in remote communities in forests and up in mountain villages. And they wouldn't necessarily define themselves as defenders. Often the first time they learn of a project will be the chainsaw in their forest or a bulldozer on their land."

Kyte says this pattern is related to another: Starting around 2008 the annual number of killings shot up. He thinks a big reason is the spike, around the same period, in the prices of certain commodities found in places indigenous people live.

"Those areas are often areas which have up to now been out of reach," says Kyte. "But as huge demands for natural resources intensifies more and more, companies are encroaching on to these lands."

Kyte says when local people have protested, some of these companies have hired paramilitary forces to intimidate or eliminate them. And because there's big money at stake, governments often see the companies as allies.

"Many of the activists killed had received numerous threats before their eventual deaths — and governments weren't protecting them as they should have been," he says.

Kyte won't be releasing the statistics on 2015 for a few more weeks, but he says it's already clear it was the deadliest yet.

He rattles off some of the fatalities: The anti-logging activist in Brazil gunned down while walking down a country lane with his wife — his name had been on a widely circulated hit list. Then there was the indigenous leader in the Philippines who had opposed large-scale mining. He was shot dead in front of his four children, and the remaining members of his village were forced to flee.

This year could prove even grimmer. Among the casualties so far — someone Kyte considered a friend: Berta Caceres, a Honduran indigenous rights activist. She had led a peaceful campaign to stop one of the world's largest dam builders from building a project that would have cut off her people from water, food and health care. She was shot by gunmen who stormed into her home one night last month.

Though the government has yet to arrest the killers, Kyte shares the view of many that she was assassinated in retaliation for her activism. After all, she had been threatened repeatedly.

"I think Berta, because of how outspoken she was, and because of just her commitment to the cause, knew that something would eventually happen to her," says Kyte.

Yet in some ways, Kyte says her murder surprised him. His group and others had helped give Caceres international recognition by publicizing her struggle. Last year she was awarded the prestigious Goldman Environmental Prize.

"I thought it might serve as a way of protecting her from being killed," he says.

When he learned of her death via email from a contact in Honduras, "I immediately broke down in tears. Honestly, I felt impotence," he says.

As for Phan Sopheak in Cambodia, thanks to contributions from outside groups, she's getting medical care. Slowly her foot is healing. And as soon as she is able, she wants to rejoin her patrol.