Accessibility links
She Was Married At 13, She's The Mother Of Twins And She's A World-Class Wrestler : Goats and Soda On the wrestling mat, this young woman from an unassuming Indian village fights back against patriarchy and prejudice. 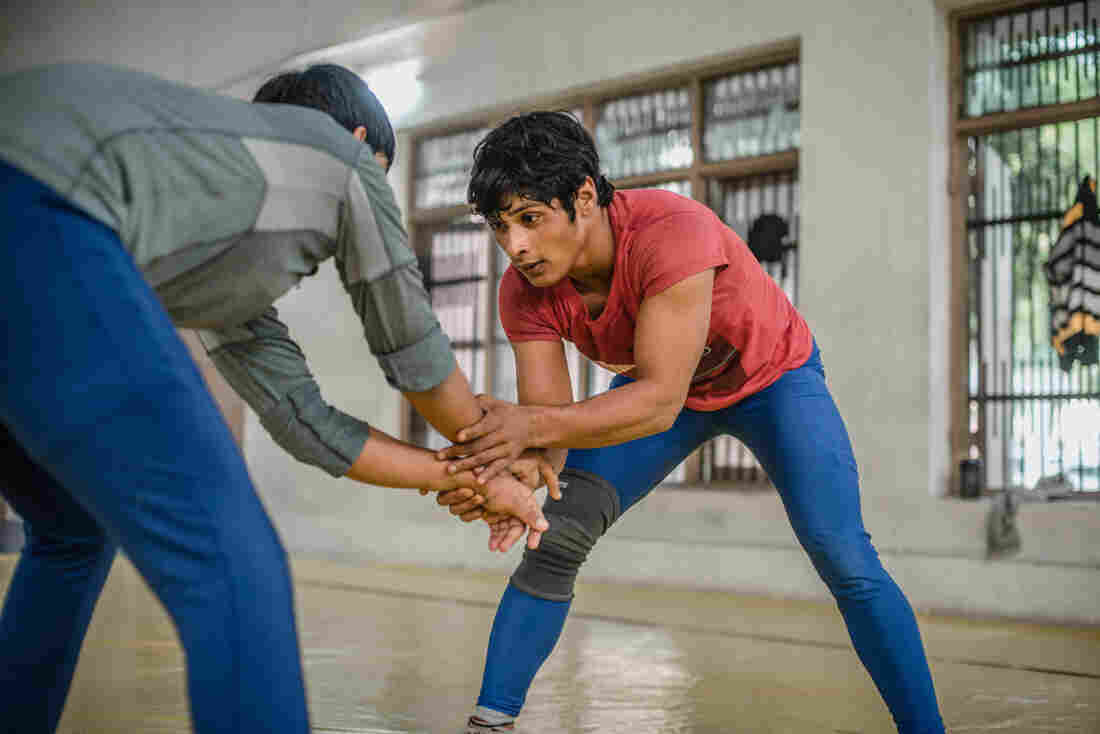 Neetu trains nearly 8 hours a day at a wrestling facility in Rohtak, India. Her coach says, "She doesn't take a break for even one minute." Poulomi Basu/for NPR hide caption 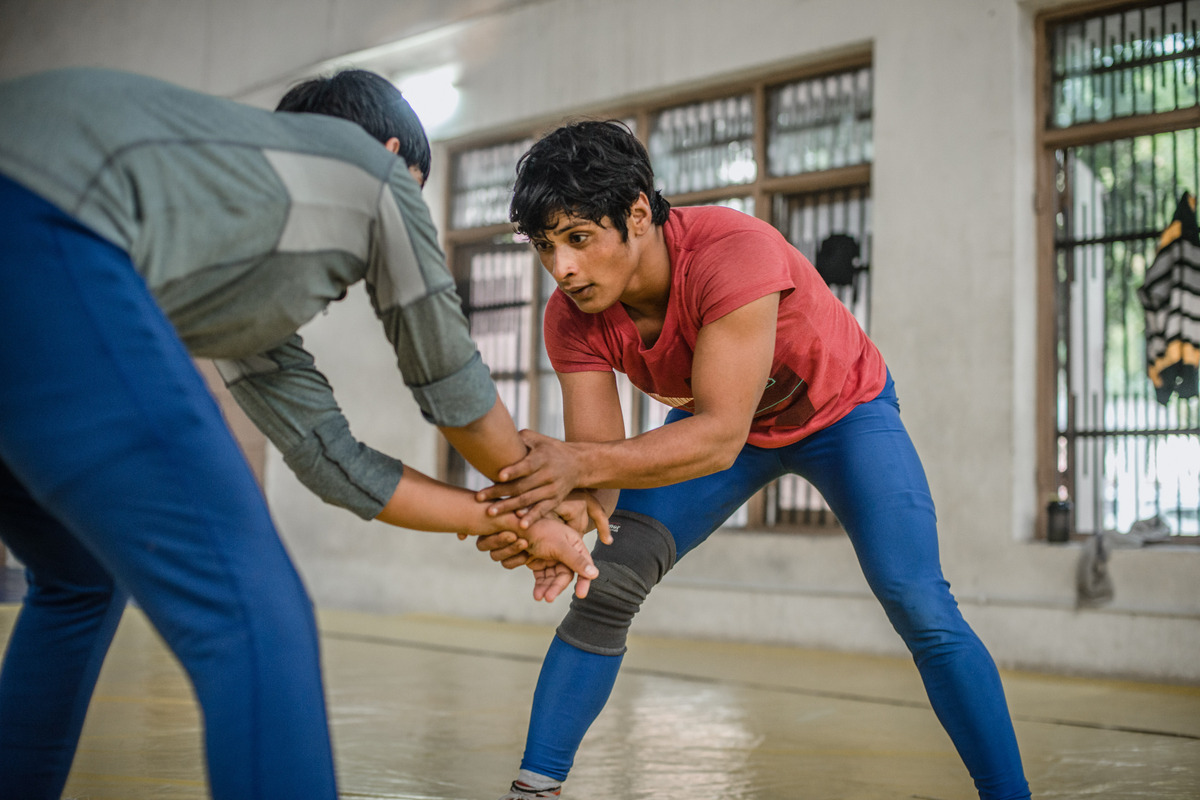 Neetu trains nearly 8 hours a day at a wrestling facility in Rohtak, India. Her coach says, "She doesn't take a break for even one minute."

This story is the first in an occasional series on India: Against the Odds.

Early morning light filters into the cavernous gymnasium as Neetu lunges, climbs and contorts her body into impossible positions. She shimmies up a thick rope that dangles from the two-story ceiling, her heavily muscled arms propelling her upward. She races through calisthenics with 25 other young women in the boot camp atmosphere of Chhotu Ram Stadium and Wrestling Center, in the Indian state of Haryana, known for its wrestling tradition.

The grueling twice-a-day practice– 4 hours in the morning and 3 1/2 in the afternoon-- is her ordinary routine.

But there is nothing ordinary about this young woman, who prefers to be known simply by her first name.

Her journey to become a promising athlete began from a most unpromising place: as a child bride.

At 13, Neetu was married off to a man three times her age. "He was mentally challenged," says Neetu. When he defecated in the house, she refused to clean it up, incensing her mother-in-law. Even worse was a father-in-law who acted like a sexual predator.

"One day when no one was home, he took me into his bedroom and pulled off my veil," she remembers. "He warned — 'Don't tell anyone.' "

Neetu lives in a world where, as she puts it, "If a man does something bad to a girl, it's her fault." Still she told her father, who extracted her from the marriage.

But to avoid any social stigma, her parents soon married her off again. At age 14, she gave birth to twin sons.

To help support her family, Neetu has tried on many careers. She's worked as a beautician, a maid, a shop clerk and a self-taught tailor.

"I learned to sew just by unstitching old suits and restitching them back together. I couldn't afford training. I had no money," she says.

Then she got into a neighborhood scrape, stepping in to defend an in-law, and took a blow to the head with an iron rod. She was unconscious for weeks. Even when she recovered, she was not the same. "I started having fits." Her tailoring clients stopped coming.

Being poor did not dent the dreams of this seemingly indefatigable young woman. Nor did the fact that she only had a 7th grade education. Since childhood she had a knack for sports, high-hurdling over her grandmother's bushes. Neetu recalls astonished neighbors seeing her, a small girl, haul home heavy iron canisters of gas for cooking.

Watching the TV coverage of international games staged in New Delhi several years ago, Neetu was inspired by wrestling, an individual sport — "You get lost in a team," she says. And now it's become her passion.

"I love my wrestling," she says. "Wrestling is my life. I have to do this for my children, so that they can do all the things I couldn't do in my childhood."

Disadvantaged girls like Neetu increasingly see the sport, with its potential earnings, as a path out of poverty, says coach Mandeep Singh. There is prize money and there are jobs to be had. India's Railway Board, for example, sponsors athletes to be part of the Railways official wrestling squads. By their mid-20s, athletes must retire, then assume a permanent post with the railroads, a job many wrestlers covet.

Few train with Neetu's discipline. For more than two years, she rose at 3 a.m. for the bumpy hour-and-a-half bus ride from her village of Bedwa to her punishing morning workout in the city of Rohtak. After practice, she'd return home to do housework, then journey back in the afternoon for more drills. At home, Neetu would sprawl out on her bed with her boys helping with their homework. "I would sneak out to call a friend who knew English and return to impress them with what I knew," she laughs.

At the gym she cuts a solemn figure. Coach Singh sternly instructs, "Don't be passive," and Neetu listens with the rapt devotion reserved for a priest. With her sculpted limbs, shorn hair, and sweat-ringed T-shirt, there is no mistaking Neetu for anything but an elite athlete. Pinning her practice partner to the mat, she seems to have wrestled the child bride out of herself. 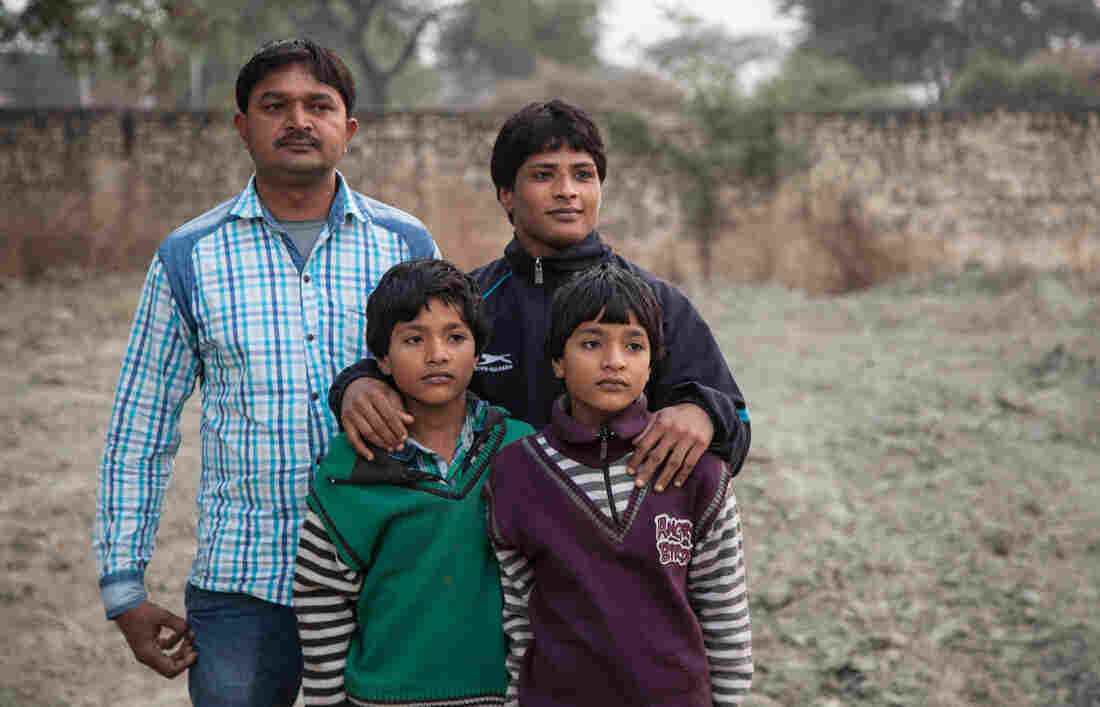 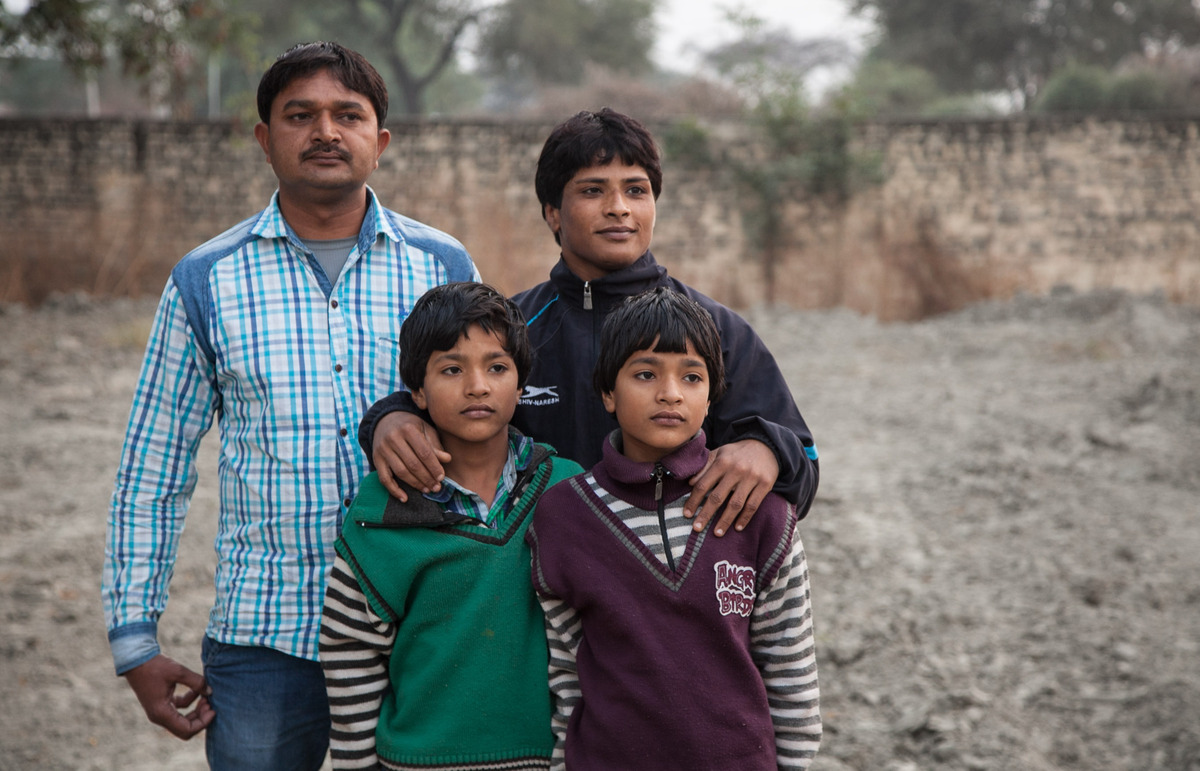 Neetu with her husband, Sanjay Kumar, and their twin sons, Prince and Ayush.

Coach Singh says she takes direction like few do.

"She's different in terms of will power. And being married with small children from a deprived background, it's an achievement to even be here," Singh says. "During training, she doesn't take a break for even one minute. She's determined to become something."

Neetu now lives in a small room near the gym, sparing herself the long commute back and forth from her village. This winter she added acting to her long list of jobs. She won a bit part in a movie about a fabled Indian wrestler who taught his daughters the sport and is using the money to pay the rent. Film scouts looking for a powerfully built female spotted her at a recent national championship.

In her humble quarters, Neetu squats on the concrete floor, fixing milk and an egg, one of the few sources of protein in her diet.

The new living arrangement means she can only see her twin sons on the weekend. She says their father, her second husband, has been a savior.

"He's given me a new life. He pulled me out of hell and brought me to heaven. I'm able to wrestle because of him. I'm away and we don't have a usual husband-wife relationship. He's made a huge sacrifice," Neetu says.

He wasn't always supportive. When she first confided her dream to wrestle, husband Sanjay Kumar called it "crazy." Neetu then weighed 175 pounds.

But she shed 60 pounds — and any inhibition about pursuing her God-given talents. Sanjay lent moral support. When his business selling milk failed, he adjusted to a new role as house-husband: "I learned to do housework by watching her."

"The hard work is Neetu's," he says."I've just encouraged her, and I'm with her all the way. Neetu is not the kind of girl to back down." Still, Sanjay had a caveat: "If you start, you have to succeed, or we'll get a bad name."

The fear of getting a bad name, of being disgraced, is often used to intimidate independent-minded women, says Jagmati Sangwan, a former member of the Indian National Volleyball team. She now leads the All India Democratic Women's Association and, like Neetu, is from Haryana. Sangwan calls her home state a "predominantly feudal, patriarchal society," especially tough for female athletes.

"The mindset is that if women will participate in sports they will become more and more confident," she explains. And then men fear "they will be losing their control over these women." 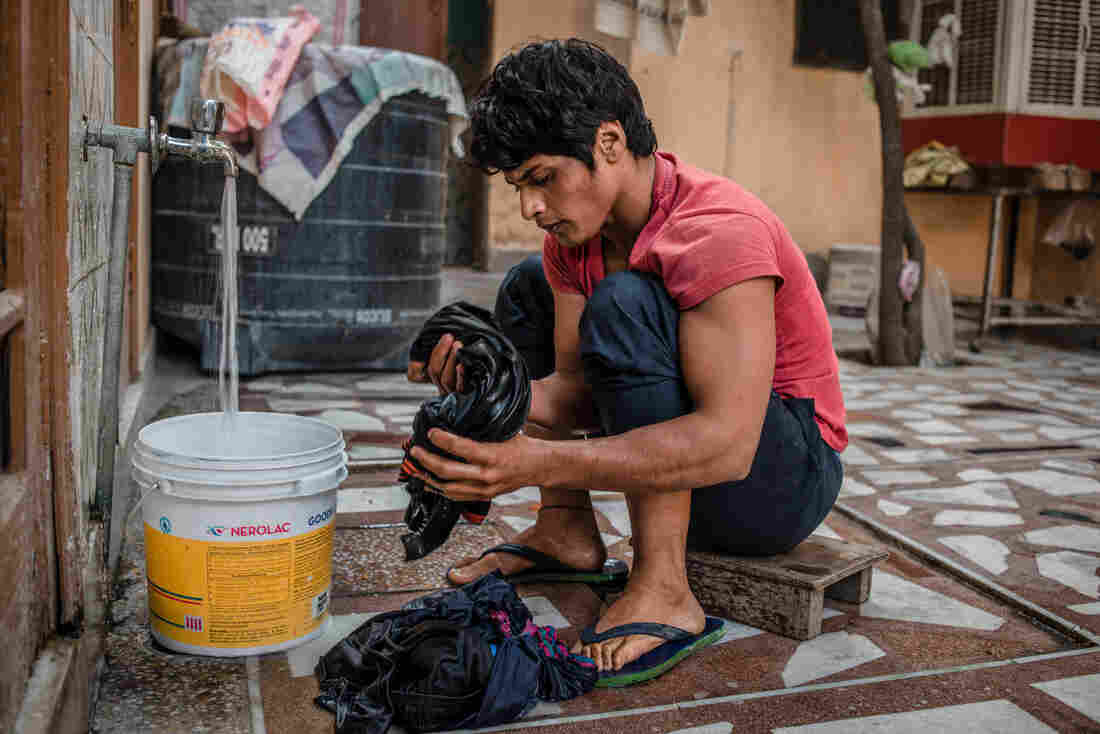 Neetu washes clothes in her rented room in Rohtak, India, where she lives (and trains) during the week. On weekends, she goes home to her village to be with her family. Poulomi Basu/for NPR hide caption 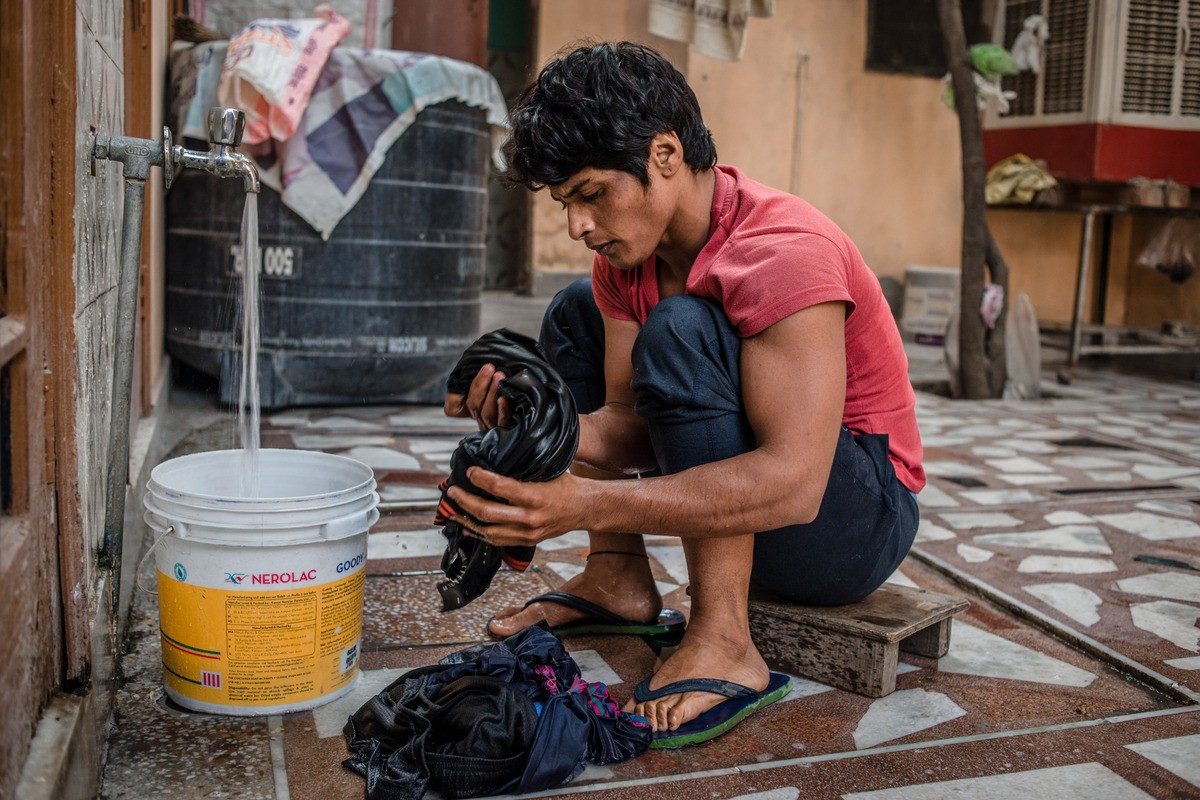 Neetu washes clothes in her rented room in Rohtak, India, where she lives (and trains) during the week. On weekends, she goes home to her village to be with her family.

A child bride no more, Neetu puts her age at 21. A competitor once alleged she's older, but her passport says she's 20. Absent official birth records, there's often confusion about how old people are in India.

One Sunday, back home in her village, Neetu wrestled with her sons in their hometown playing field, a stony lot. Nothing in her surroundings lends itself to athletic glory. The streets of her village are open sewers. Cattle are quartered steps from villagers' homes. The hard-scrabble reality makes her dream to be a world-class athlete, seem implausible. Conservative mores made the climb steeper.

There were insinuations: "Is she really at a gym?" asked gossipy neighbors. "Why don't you wear bangles" and traditional dress, villagers asked, repelled by her tracksuits.

"I never replied back," Neetu says.

Eventually, the village came around — once she started winning events.

"Even people who had spoken ill of me, said, 'Train our daughters to wrestle. Make them like you.' "

Newly respectful neighbors delighted in the attention she brought to their inconspicuous village, beginning with her first national medal in 2015 during India's 35th National Games, where she won a bronze in the 53 kilogram (116 pounds) category. Last summer she joined the Indian women's team competing for the Junior World Championship in Brazil.

But Neetu also made concessions to rural traditions, covering her head in public as a sign of modesty, even if it meant simply throwing her jacket over her head.

Balkesh Ahlawa, a 45-year-old villager, remarked, "She's changed everything! Everybody believes that a girl can now say — 'I want to do something.' "

After upending stereotypes in her own village, Neetu quietly raises awareness in others. At a girls' school, where the students welcome her with songs and skits about discrimination against girls in traditional families, Neetu tells her story of striving despite every disadvantage. She tears up sharing painful facts of her life. But seems awed by her own progress — a girl who picked cotton to pay her bus fare "taking a plane for the first time to Brazil" to compete.

She tells the girls to stay in school and dream big dreams.

For her part, Neetu is eyeing Tokyo and the 2020 Olympic Games. With determination as rock-hard as her muscles, she declares, "I will go there. I'm 21, and four years ago the Silver Medalist was 34, and a mother.