Accessibility links
Why Surgery Has Become The Overlooked Stepchild Of Global Health : Goats and Soda A new report says 5 billion people lack access to even the most basic surgical care. Why is surgery ignored in the global health landscape? 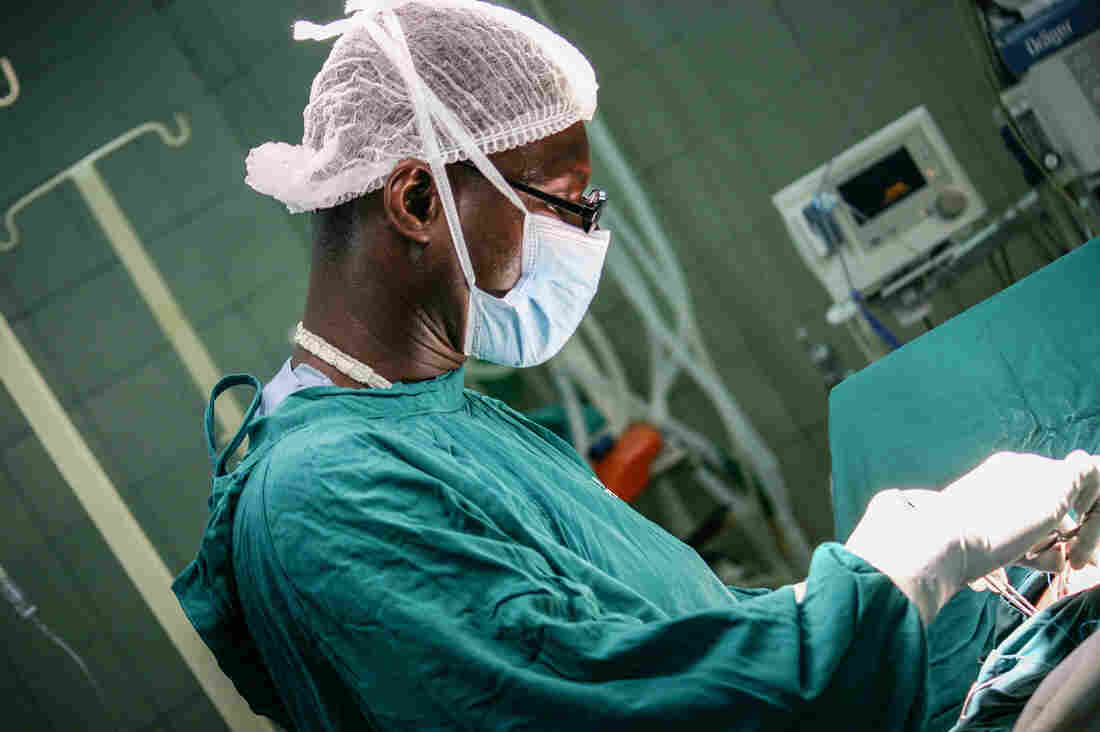 Dr. Forster Amponsah is one of two surgeons at the Koforidua Regional Hospital in Ghana. Trained in Cuba, he came home because he felt his skills were needed in Africa. Jason Beaubien/NPR hide caption 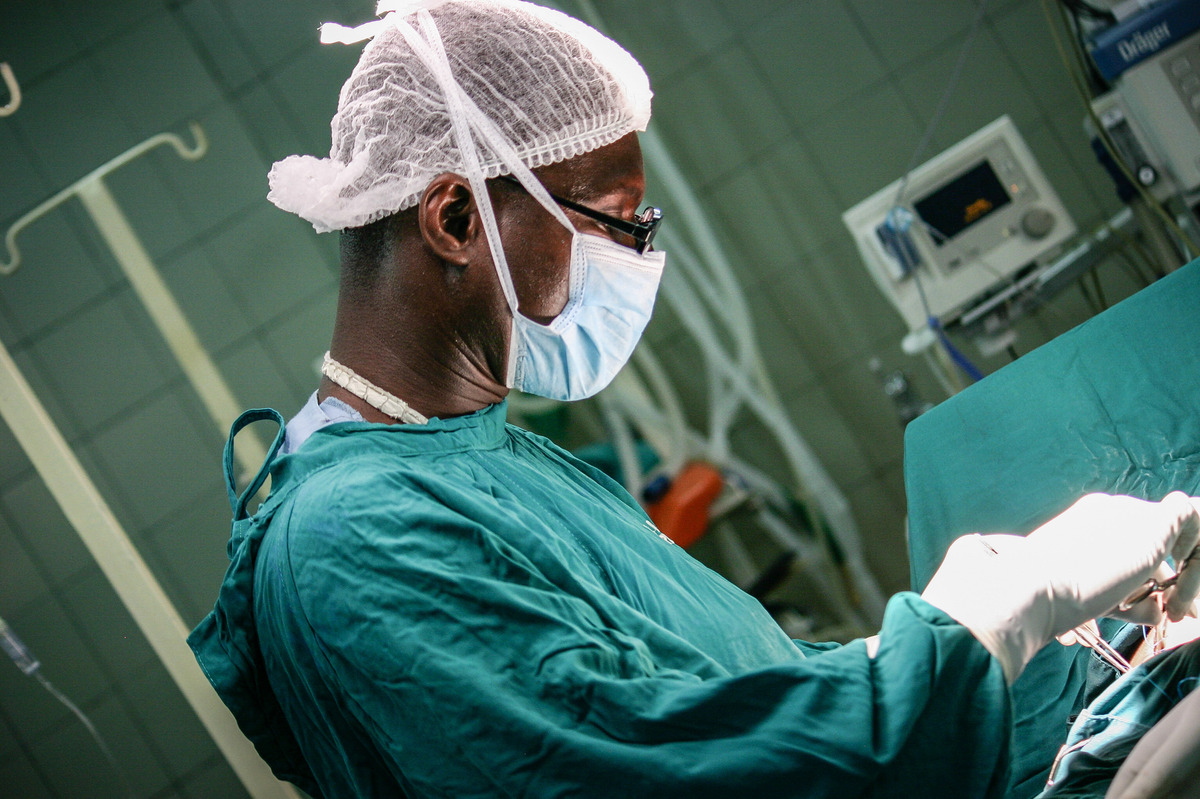 Dr. Forster Amponsah is one of two surgeons at the Koforidua Regional Hospital in Ghana. Trained in Cuba, he came home because he felt his skills were needed in Africa.

At the Koforidua Regional Hospital in Ghana, Dr. Forster Amponsah is about to start an appendectomy in one of the hospital's four operating theaters. A half-dozen other patients who have been prepped for surgery lie on gurneys in the surgical ward's foyer. Amponsah is planning to do all the surgeries in quick succession — but then the entire wing of the hospital goes dark.

"The general electricity is out and our generator is broken down," Amponsah says.

Ghana has been experiencing rolling power outages for months. As Amponsah waits for the light to come back on, orderlies wheel two more surgical patients into the foyer and park them in the queue that's quickly turning into a backlog.

The loss of electricity is just the latest stumbling block to getting surgery done.

A new report in BMJ Global Health says essentially that surgery has become the overlooked stepchild of global health. The authors say that 5 billion people lack access to proper surgical care and they argue the world needs to rethink the importance of surgery.

Ghana is actually doing better than many African countries when it comes to surgery. The West African nation is trying to make it universally available. But the Koforidua Regional Hospital illustrates some the challenges. The facility has four operating theaters and two surgeons but there's only one anesthetist, so both surgeons can't operate at the same time. Amponsah says they often run out of medical supplies. He explains how he can make a chest tube drain from a plastic water bottle. On the morning that I visited the hospital, which has 400 beds to serve the eastern region of Ghana, the chief surgical nurse got called off the ward to cover at maternity. 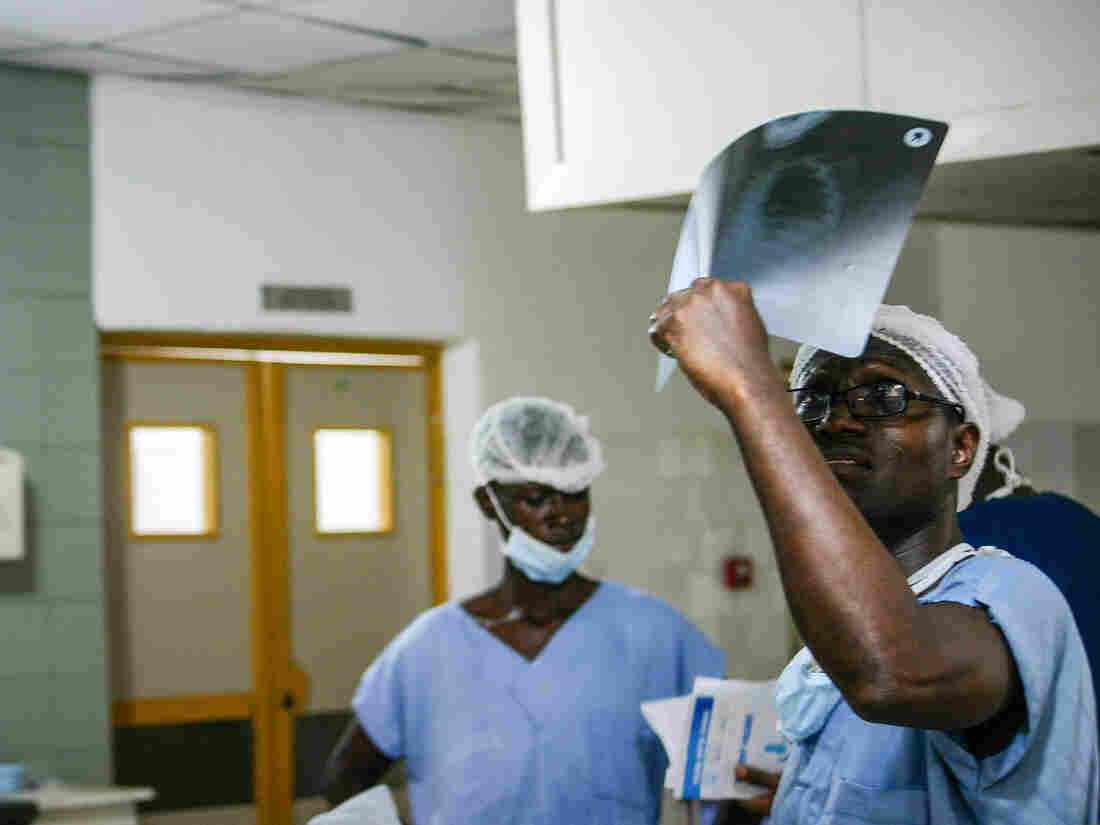 Amponsah believes that "God heals and the people heal themselves." He says his role as a surgeon is to facilitate the healing process. Jason Beaubien/NPR hide caption 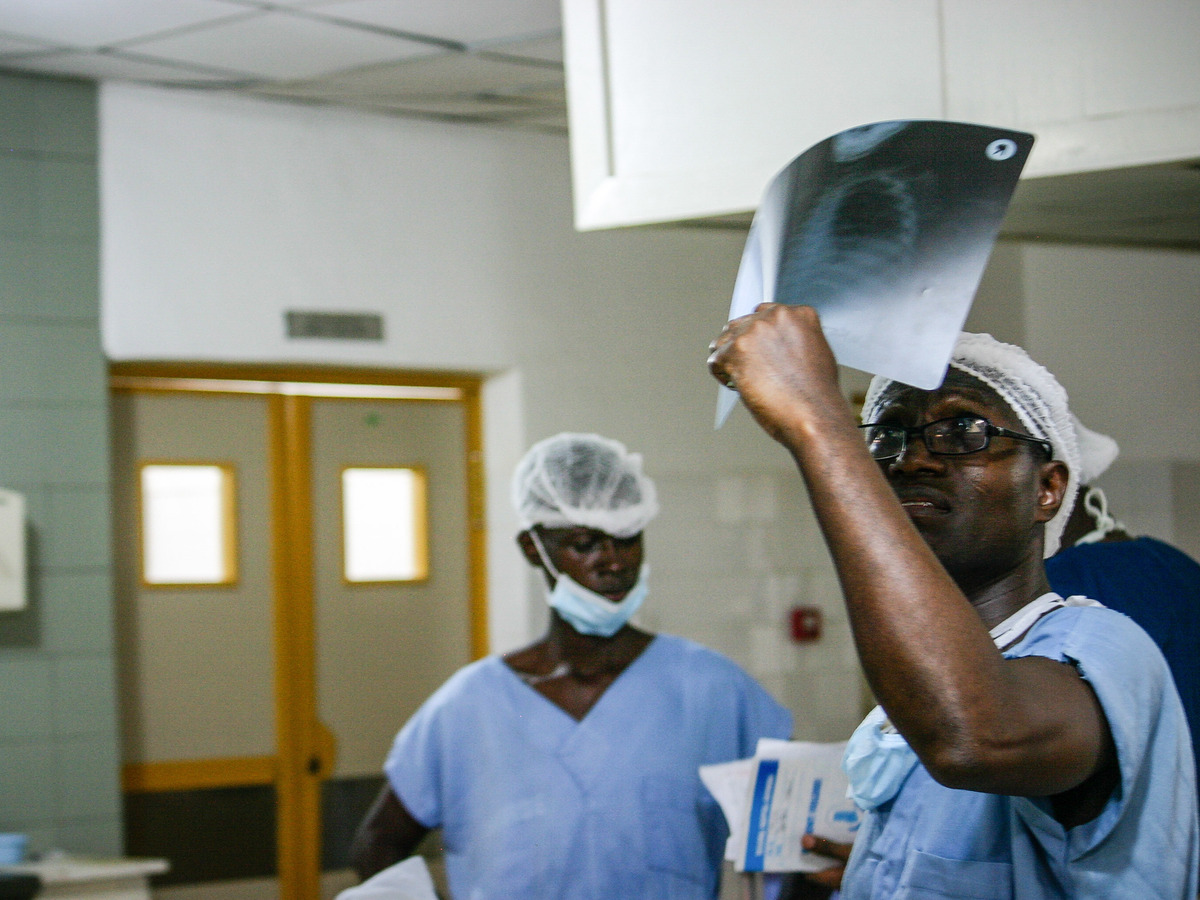 Amponsah believes that "God heals and the people heal themselves." He says his role as a surgeon is to facilitate the healing process.

After a half an hour, the power flickers back on. Amponsah starts an appendectomy while at the same time triaging his waiting room. He orders two patients he deems "not emergencies" to be sent home and rescheduled for another day.

Soon after Amponsah cuts open the abdomen of the first patient, it's clear that the suction machine is on the fritz again.

An intern fetches another suction machine from one of the other operating theaters.

Before Amponsah is even finished with this operation, a nurse comes to his side to tell him there's been a car crash. An open top Jeep has somersaulted off the highway. One of the passengers is in extremely bad shape.

The Cuban-trained doctor will spend much of the rest of the afternoon stabilizing and patching up these car crash victims. Then he'll return to the patients waiting on their gurneys back in the surgical ward.

Around the world this experience for surgeons is not uncommon. Dr. Josh Ng-Kamstra, one of the authors of the new report on global surgery, says in much of the developing world surgery gets far less funding, attention and resources than treatment for, say, infectious diseases.

"This is a problem that's been really developing over the last number of decades as surgery hasn't had the kind of media attention as other global health problems have had," Ng-Kamstra says.

He says international donors have been interested in programs that show results. It's easy to quantify the impact of a vaccination campaign or the distribution of bed nets to block malaria or the provision of anti-AIDS drugs. Funders can say, "X number of people were served." Providing surgical care, however, is more complex. Not only do surgeons have to be trained, but health care systems have to be strong enough to support to support them. Electricity, anesthetists and functioning suction machines are all needed. 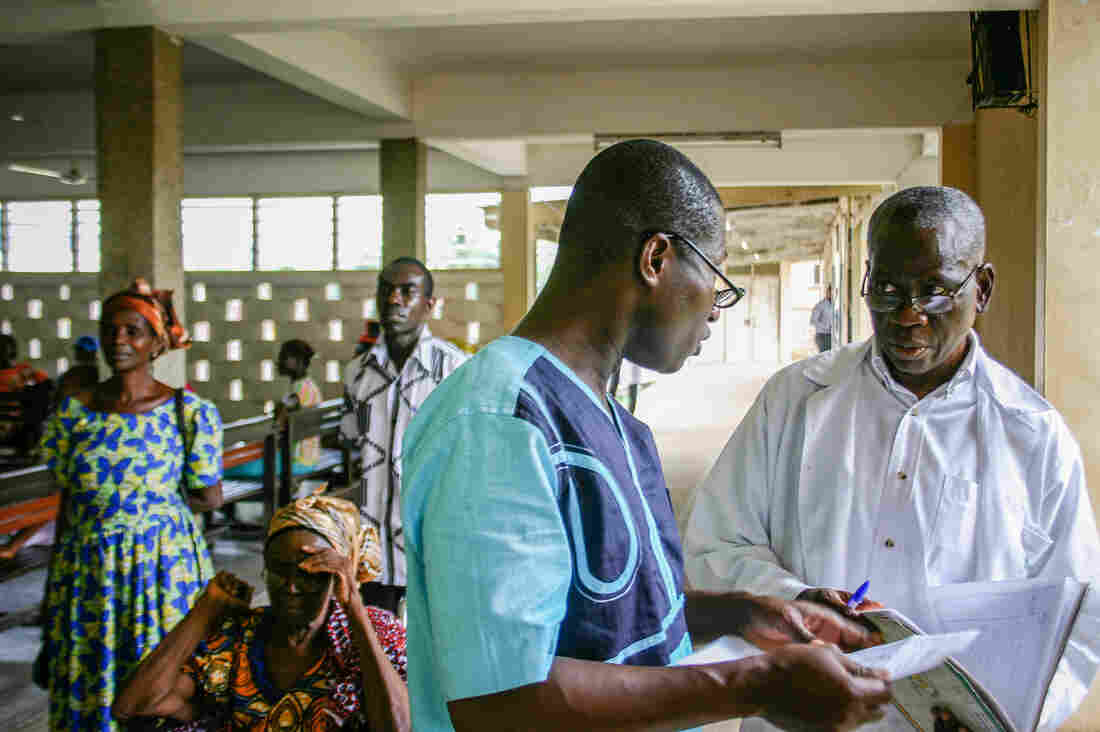 As he makes his rounds, Amponsah is constantly asked for advice by colleagues and patients. He and the other surgeon often have to improvise to make up for the outdated equipment and lack of supplies. Jason Beaubien/NPR hide caption 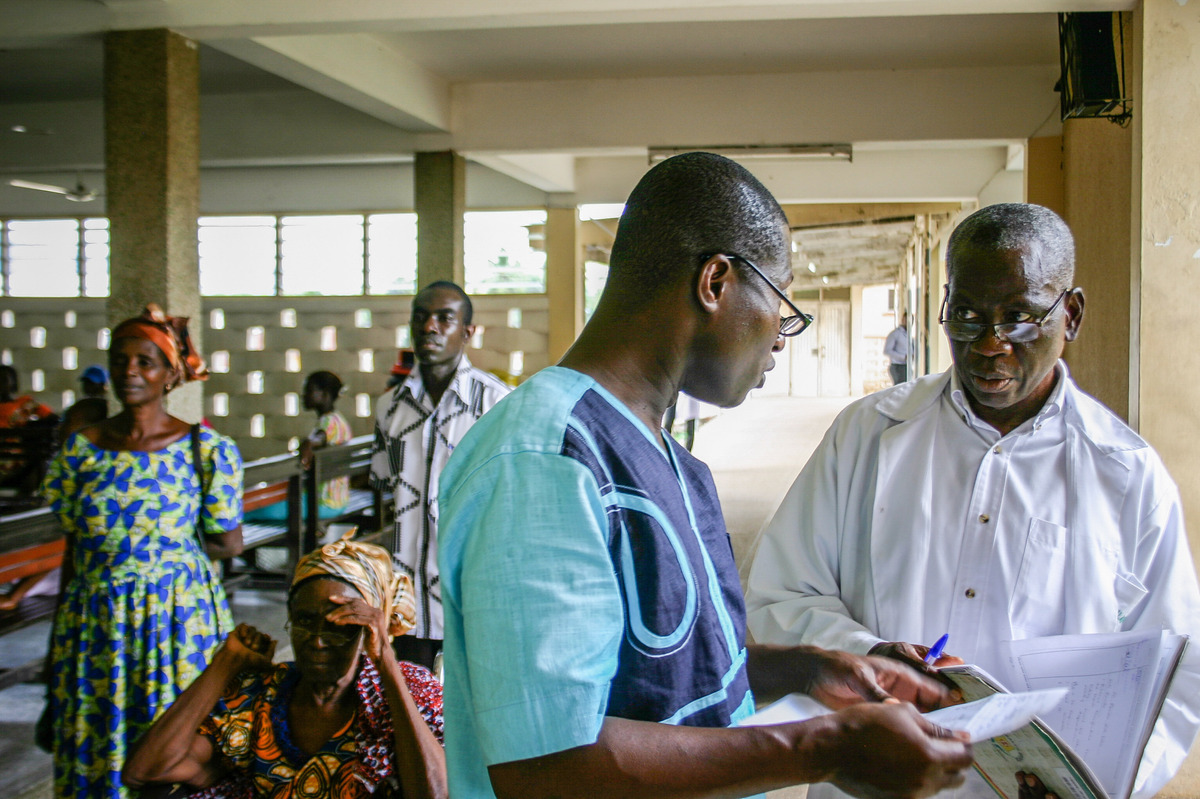 As he makes his rounds, Amponsah is constantly asked for advice by colleagues and patients. He and the other surgeon often have to improvise to make up for the outdated equipment and lack of supplies.

Ng-Kamstra says surgery has been so ignored in the overall global health landscape because it's difficult and complex. He says billions of people now don't have access to it.

"We are not calling for access to the most expensive, highest-tech procedures," he says. "We are talking about basic surgeries that we want everyone in the world to have access to."

Surgeries like the hernia repairs and appendectomies that Amponsah at the Koforidua Regional Hospital in Ghana had been trying to get finished all day.

Amponsah says he and his colleagues often have to improvise to get surgeries done, borrowing suction machines from other wards or making casts out of cardboard.

"This is what I have and I have to make do with what I have," he says cheerfully.

And even though he often ends up working long days, he says he loves his job.

"I'm needed here!" he says. "And I'm satisfied when I see people get better."