Accessibility links
Lupita Nyong'o Salutes Africa, Not Whoville, With Her Met Gala Hair : Goats and Soda Many media mavens said her towering coiffure was a nod to Dr. Seuss' hair-raising town. Nope. It was inspired by the stylings of Africa. 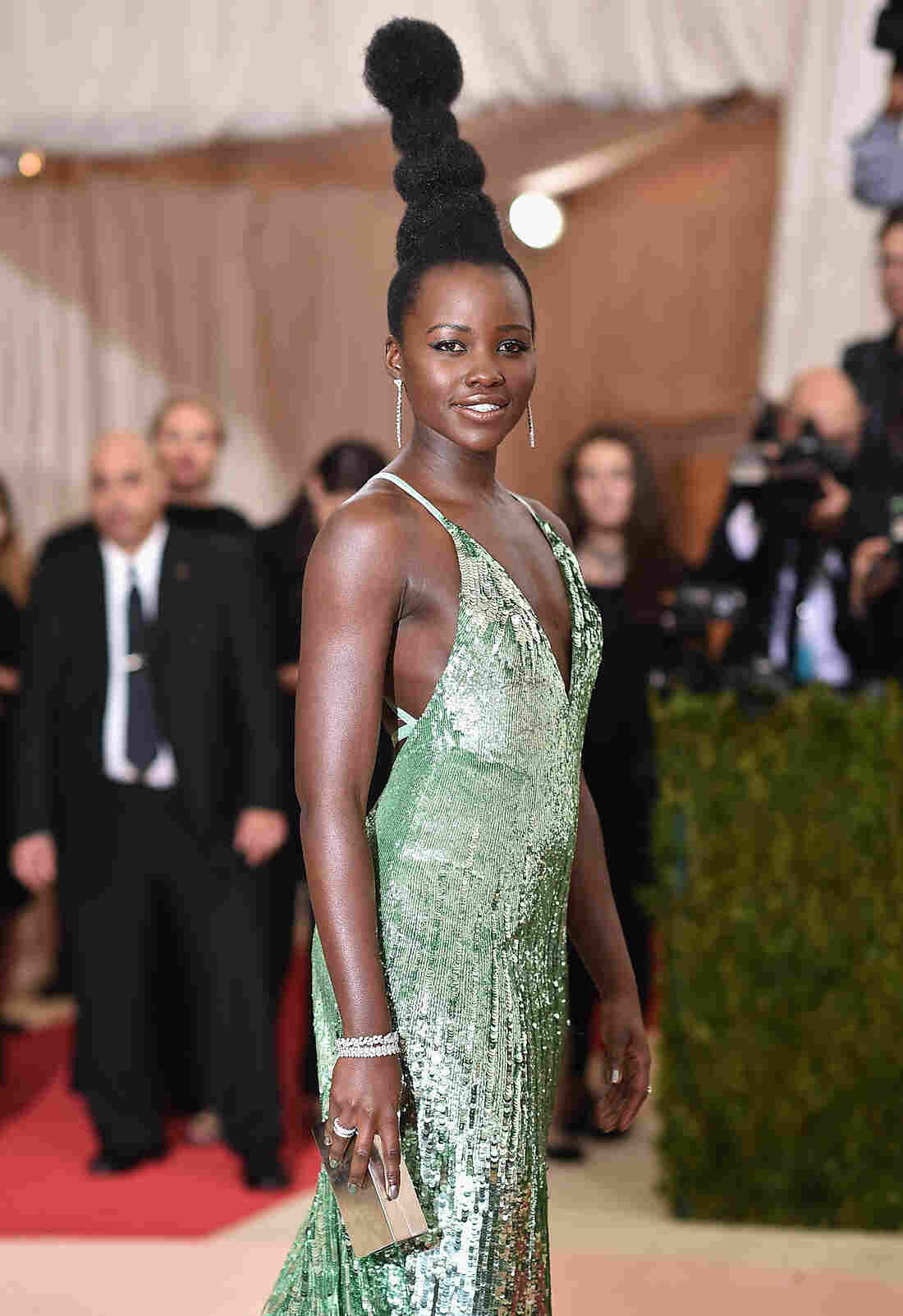 Lupita Nyong'o's hair at the Met Gala made headlines. The theme of the ball was "Manus x Machina: Fashion In An Age Of Technology." Dimitrios Kambouris/Getty Images hide caption 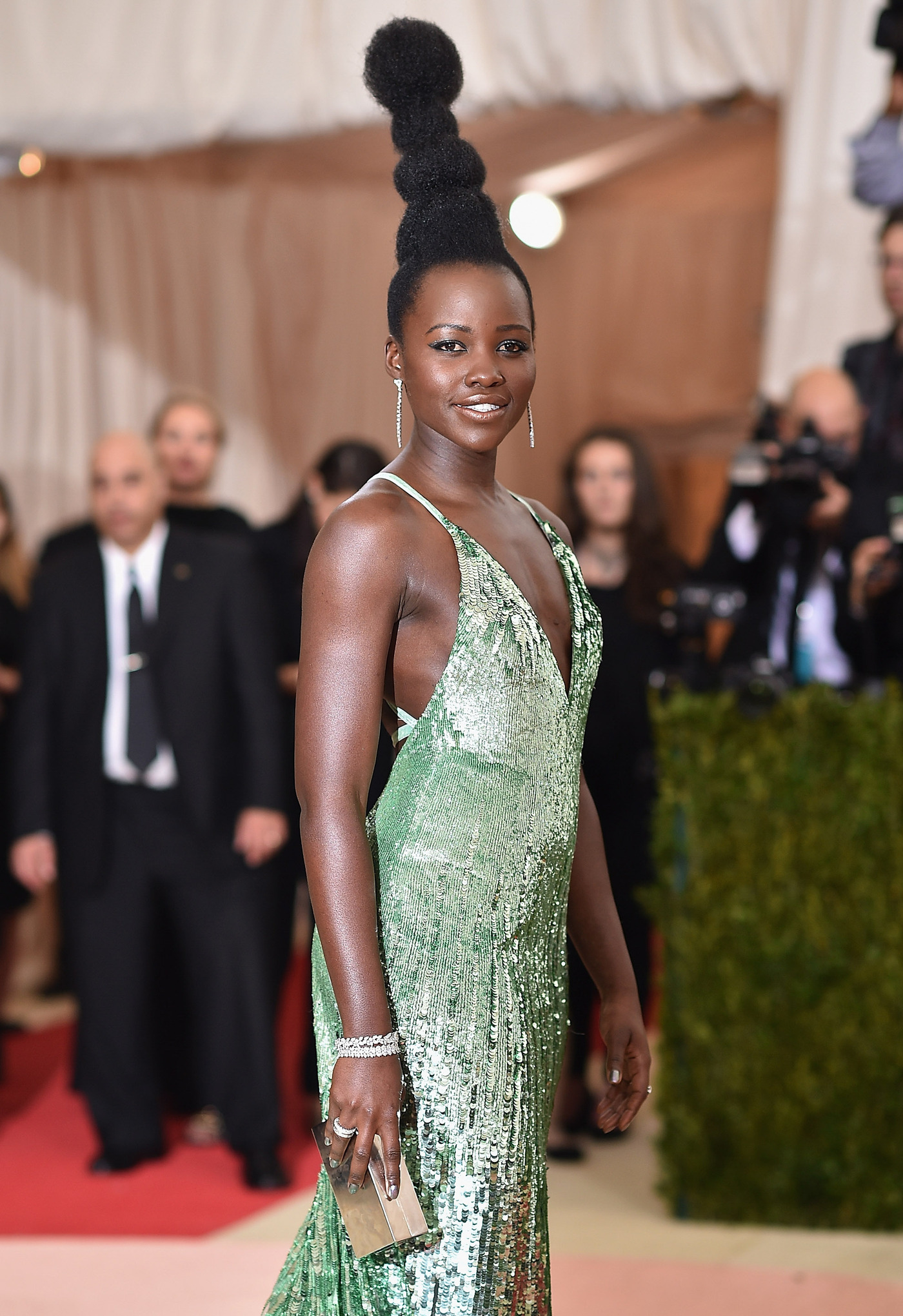 Lupita Nyong'o's hair at the Met Gala made headlines. The theme of the ball was "Manus x Machina: Fashion In An Age Of Technology."

Nyong'o, who was raised in Kenya, styled her hair into what some outlets described as "Whoville hair," a reference to the quirky hairdos in the town Dr. Seuss invented in How the Grinch Stole Christmas. Nyong'o's hair was piled tall and straight, with four segments, each sculpted into a bubble. It instantly was filed as a meme, with comparisons to The Simpsons' Marge.

"We wonder, what is going on underneath all of the hair to keep it up?" a USA Today reporter asked. "How did she travel to the event with that on top of her head? Or, maybe those should just remain fashion mysteries."

Lori Tharps, an assistant professor of journalism at Temple University and co-author of Hair Story: Untangling the Roots of Black Hair in America, finds this sort of commentary "insulting ... as if Africa fell off the map."

"I've been looking around, [and while] I don't definitively think [the hairstyle] has resonance in Kenyan culture, it's African," Tharps says.

In the African past, sculptural formations of hair signaled status and wealth. "There's that sense of adornment, but it can have meaning," Tharps says. A towering hairdo has historically signified a person's tribal background, rank in society — or a wife's ability to live a life of leisure because of her husband's wealth. Some of these styles can be seen in the late Nigerian photographer J. D. 'Okhai Ojeikere's anthology of nearly 1,000 Nigerian women's hairstyles: elegant, braided, complex, architectural masterpieces.

The design of the hair itself is an arduous process, involving hair extensions and styling to sculpt the hair. Nyong'o's hair is usually cropped short, so Tharps believes extensions were used to erect her Met Gala showstopper.

Hair extensions themselves are deeply ingrained in African society: In Hair Story, Tharps and her co-author, Ayana Byrd, wrote about extensions in the 1400s, when men would cut off their wife's hair and weave it into their own to impress others in society with their hairy power.

Today, tall hairstyles like Nyong'o's aren't an everyday phenomenon in most parts of Africa — "it's costly and not necessarily the best thing for one's hair," Tharps notes — but it's a tradition that continues in many African societies.

So Tharps is surprised that the conversation around Nyong'o's hair hasn't paid much attention to its African origins. Indeed, Nyong'o herself has shied away from referencing her African background as a fashion inspiration, pointing to Audrey Hepburn and Nina Simone as role models in a red carpet interview with fashion critic Andre Leon Talley.

"It strikes me as crazy," Tharps said, wondering why people seem oblivious to the roots of Nyongo's Met Gala coiffure.