Accessibility links
Why Are All-Male Panels Trending In A Sector Dominated By Women? : Goats and Soda The aid industry focuses on issues about women and is dominated by female staffers. So why are they often absent in high-level public conversations? 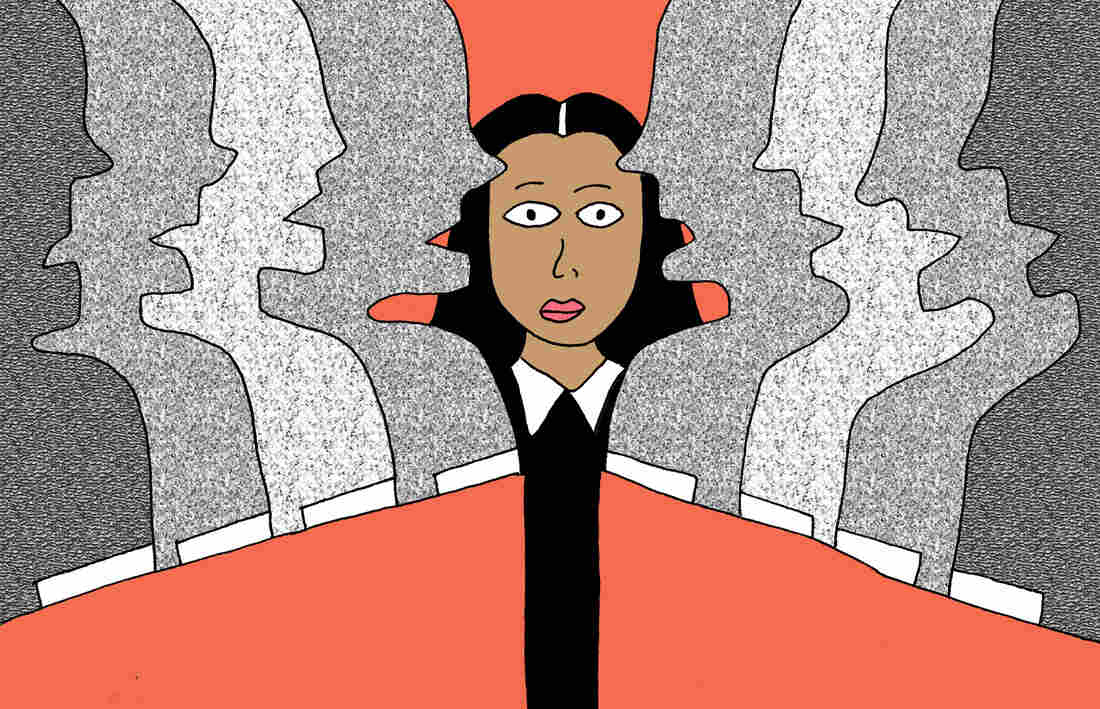 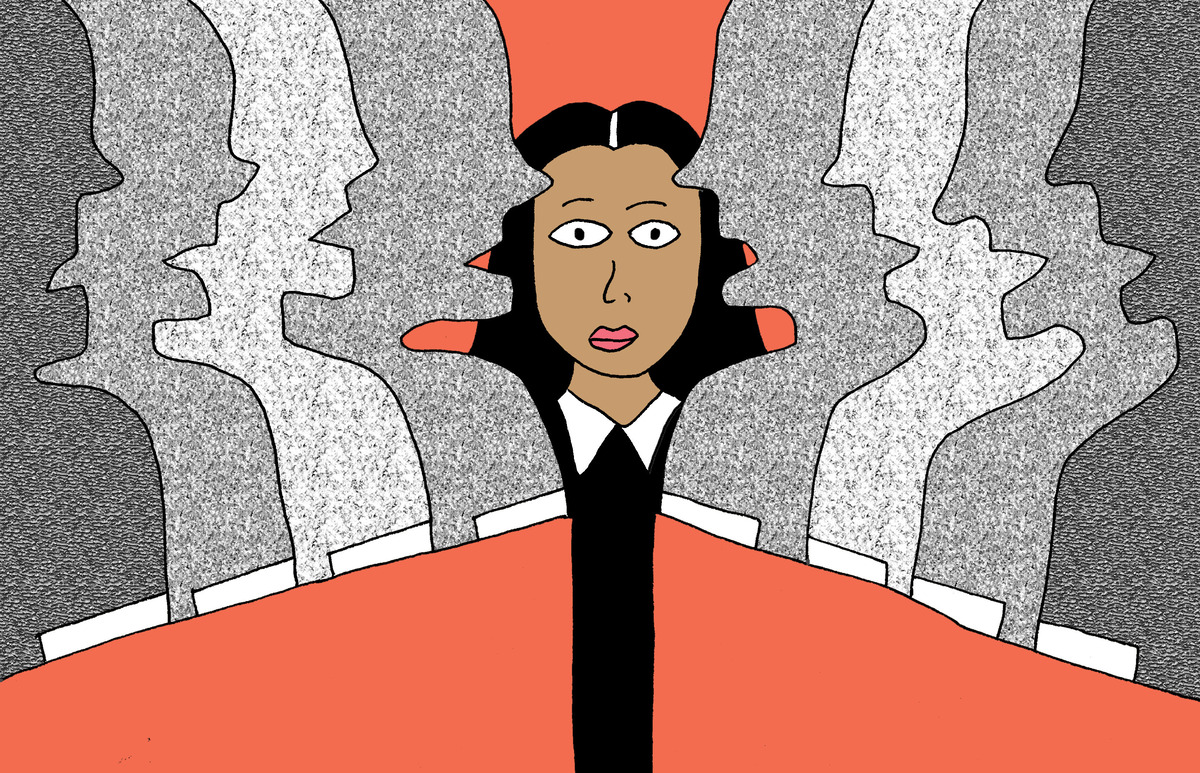 There was the seven-member all-male panel discussion on energy and climate at the European Commission in February.

There was the seven-member all-male panel on counterterrorism at the U.N. in March.

And then there was the panel on infrastructure at the World Bank in April: 15 men and one lone woman, in a red blazer, serving as the moderator.

Why are women so woefully underrepresented?

That's the big question behind the hashtag #allmalepanels. Since 2013, it's has been tacked onto photos of dudes-only panel discussions at conferences and blasted out on social media. The goal is twofold: draw attention to the lack of women experts in male-dominated fields like finance, tech and science as well as push for the inclusion of women.

But over the past year or so, the hashtag has started trending in an unexpected space, the international development and aid sector — where women's issues are a key part of the agenda and where the workforce is hardly male-dominated.

In the U.S., for example, a 2009 survey from the University of Denver shows that women made up 75 percent of the nonprofit sector. Yet in a field that devotes tremendous money and energy to promoting gender equality, industry observers report that panel makeups are often quite unequal.

Some staffers find the lack of female perspectives troubling.

First off, it can send the wrong message. Tobias Denskus, a global development communications lecturer at Malmo University, Sweden, was moved to write about #allmalepanels on his blog, Aidnography, after seeing a photo of 25 men speaking about "inclusiveness" at an Asian Development Bank meeting in August 2015.

"Inclusiveness is one of the core beliefs of social change," he says. "It's about empowering marginalized groups, engaging a diverse group — women, children, indigenous people — in development."

"But it's only possible if many parts of society are included in the conversation," he adds. Unfortunately, the speakers didn't reflect the diversity of the topic at all.

And it can lead to shortsighted policy. Stacey Young, senior learning advisor for USAID's Policy, Planning and Learning Bureau, has witnessed many guys-only panel discussions in her 20-plus years in the aid biz. One that sticks out in her mind was a talk on small farmers in poor countries. The male experts had to know that the majority of food producers in the developing world were women, Young says. That's a well-established fact in global agriculture. Yet the panelists insisted on calling the farmers men.

"If you keep referring to a farmer as 'he,' it's unlikely that in the next breath you will talk about children or childcare — issues important to these women," says Young, who spoke to Goats and Soda at the InterAction Forum where she was a panelist. "It impedes effective agriculture [policy]."

But organizing panels with women speakers is harder than it looks, says Lindsay Coates, president of InterAction, a group that runs one of the largest annual forums for global nonprofits in the world. She couldn't guarantee that all 30 panels at her three-day event in Washington, D.C., last month had at least one woman. Part of the reason, she says, is that invitations to speak on panel discussions are often reserved for the CEOs, presidents and executive directors of organizations — and they're usually men. In the U.S., women head only about 14 percent of the global NGOs with the largest budgets; in the U.K., 27 percent; and in Kenya and South Africa, 15 to 20 percent, according to a 2013 study.

"We've had instances where we invited a more junior female person from a large, famous international institution that I can't name — and her boss bumped her off and [took her place]," says Coates. "That was very awkward."

The woman would have been the best speaker for the panel, she says. "But we have a desirable outlet, so [senior leadership at these organizations] would rather come."

And sometimes there just aren't a lot of women who are deemed "experts" in a certain topic or region within the aid sector, says Saadia Zahidi, head of gender at the World Economic Forum. Global organizations based in the Middle East and Latin America, for example, tend to be staffed by men in these parts of the world where women tend to have more traditional roles in society. And subjects like energy and finance skew male in general.

"It's not incredibly surprising that there are few female CEOs, regulators and public figures [in these issue areas]," says Zahidi. "It's a reflection, at a macro-level, of what's happening in the world."

A growing group of voices in the aid sector are fighting back. Apart from the hashtag #allmalepanel and a cheeky Tumblr blog called "Congrats, you have an all male panel!" that stamps photos of all-male panels with an image of Baywatch star David Hasselhoff giving a thumbs up sign — there's also a number of online pledges geared to people from all industries. These pledges, which originate from the Women's Leadership Institute Australia in 2013, advise men to ask a critical question: "Who else is on the panel?" If the answer is "David, Jose and Mohammed," then he should ask the event organizers if they could give their spot to a female colleague, or decline the speaking engagement altogether.

Things picked up in the global development community in January 2015, when Owen Barder, vice president and Europe director of the Center for Global Development, started his own online pledge, "I Will Not Be Part Of Male-Only Panels." Barder was partly inspired by stories around the same time period on the absence of women in Middle East policy debates and the World Economic Forum.

Since then, more than 500 people in the sector have eagerly signed on. That includes male staffers from global advocacy organizations like Oxfam, the ONE Campaign and Greenpeace, government agencies like the U.K.'s Department for International Development and institutions like the Organisation for Economic Cooperation and Development.

More recently, the panel pledge has moved from being an individual choice to an organization-wide policy. Last month, the U.N. Global Compact, an initiative that encourages businesses to adopt sustainable and socially responsible policies, took the panel pledge too.

The Compact is encouraging its 8,500 member companies, including Coca-Cola and Johnson & Johnson, to promote gender equality across industries by striving for a higher ratio of women in panel discussions.

Still, some are doubtful that sticking a few women on panels will change things.

For Denskus, any shift must be authentic — not just done to fulfill a quota. "You can't just add women and stir," he says. "Women should be invited because they are experts on the topic, not because they're women."

And why stop at gender? Simone LaPray, a speaker at the InterAction Forum from the Boston Network for International Development, says panels should include racially diverse voices from the low-income countries that development serves.

"I would be nice to not see a panel of just American experts," she says.

For now, as the #allmalepanel feed continues to hum on Twitter, many in the development space agree that adding women to high-level talks is an important first step.

The Women's Leadership Institute in Australia put together a handy toolkit on the issue and has some helpful advice: "Women can be found," they wrote in a checklist for conference organizers. "Ask other panelists, industry insiders, specialist women's organizations." And if all else fails, "Google" it.