Accessibility links
India's Dabbawallas — Lunch Delivery People — Are Now Bringing Wedding Leftovers To The Hungry : Goats and Soda Mumbai's dabbawallas, a lunch delivery collective, have begun gathering extra food from events and dropping it off with the homeless.

The Dabbawallas Will Deliver Wedding Leftovers To The Hungry

The Dabbawallas Will Deliver Wedding Leftovers To The Hungry 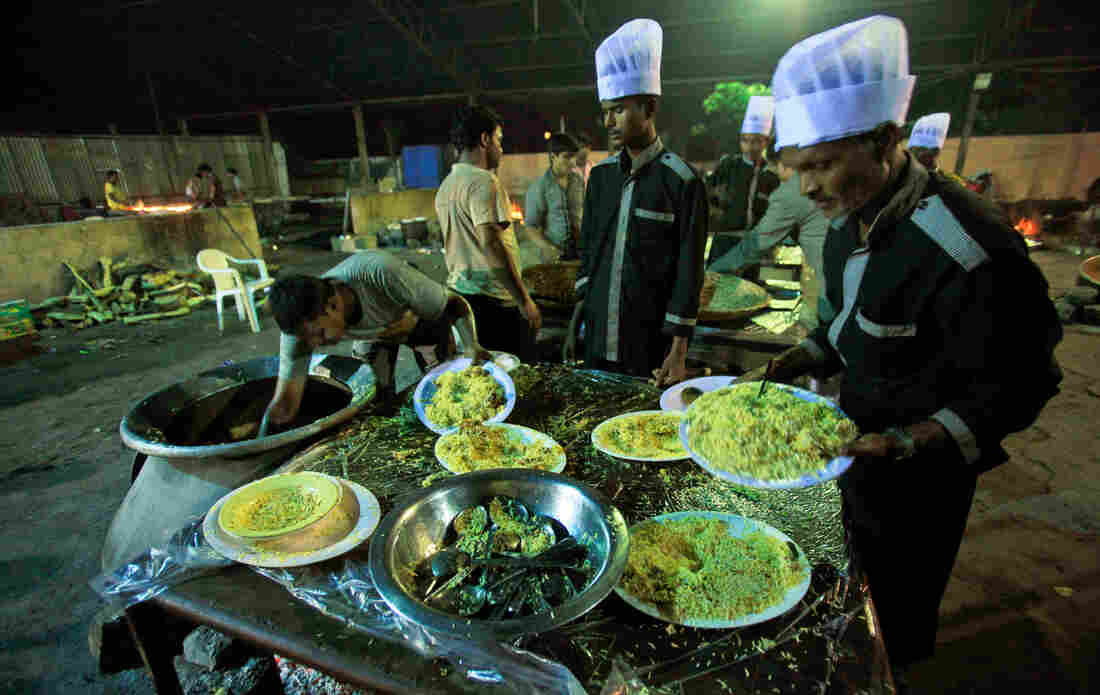 Indian weddings (and other big parties) serve a lot of food — and have a lot of leftovers. Now there's a plan in Mumbai to share the surplus with those who are hungry. Mahesh Kumar A./AP hide caption 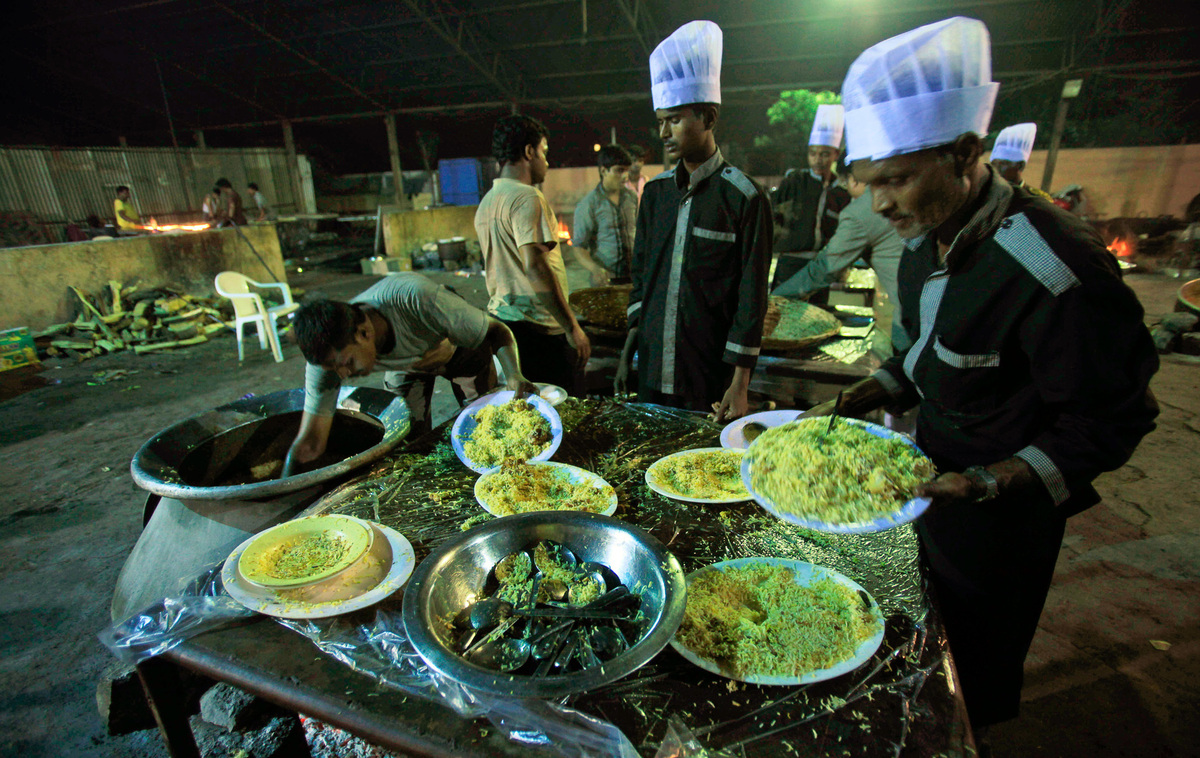 Indian weddings (and other big parties) serve a lot of food — and have a lot of leftovers. Now there's a plan in Mumbai to share the surplus with those who are hungry.

In Hindi, the saying goes that to survive, you need three things: roti, meaning bread or food, kapda or clothing, and makaan, shelter.

India has a roti problem. While the country has catapulted to No. 3 in the world for obesity, it's also the hungriest country in the world.

India has 194.6 million undernourished people — that's more than half the world total. It's what people mean when they talk about "food insecurity:" the economic and social condition of limited or unpredictable access to adequate food.

But in a study published in the August 2015 issue of the journal Lancet, researchers found that India also has 46 million obese citizens.

The dabbawallas — Mumbai's lunch delivery collective — have stepped in with an initiative they're calling the Roti Bank. Their aim is to connect the have-nots with the have-too-muchs.

"We deal with food every day, so we're ideally placed to fix this," says Dashrath Kedare, a co-founder of the Roti Bank and a leader of one of the dabbawalla unions.

Across India, there are a few soup-kitchen equivalents, mostly religious charities that dole out food at gurudwaras — Sikh temples — mosques and churches. And there are midday meal schemes to ensure kids in some schools get lunch.

But there's no way to deal with leftover cooked food.

"An average wedding has 500 guests," says Rushikesh Kadam, an event planner in Mumbai. "The smallest one I've done had 100 guests, the largest had 2,500."

Typically, he says, a quarter of the food that's prepared is trashed. Sometimes, beggars will hang around the back of an event location, near the kitchen, when parties wind up in the wee hours of the morning. The caterers then dispose of leftovers at their own discretion. But, generally, it's for scavengers — and then the trash dumps.

"Thousands of tons of food is wasted every day," Kadam adds. "And it needs to be distributed and consumed within an hour or it will spoil."

Enter the dabbawallas, translated as "the ones with [tiffin] boxes." Every day 200,000 office workers in Mumbai receive lunch sent from their own homes through the network of 4,000 dabbawallas who crisscross the city with pushcarts and lunch boxes, called "tiffins," by road, train, bicycle and on foot to ensure the right dabba reaches the right person at the right time. They're so efficient, there's even a Harvard Business School case study about them.

At one of Kadam's events, a group of dabbawallas was helping with serving and catering as a bit of side business. Subhash Talekar, a leader of the dabbawallas' union, had seen food wasted before — but something clicked this time. Kedare and Talekar packed up the food and took it to the closest train station, where they distributed it to the homeless and hungry.

"We travel these routes every day. We know exactly where the poor people gather," Talekar says.

They addressed their union and found unanimous support: The dabbawallas agreed to volunteer their evenings to collect leftover food from parties, award ceremonies and weddings. Their first pickup was December 28, 2015, from an event for an airline, and they distributed the food to 16 people.

So far, they've connected with 30 wedding planners in the city. And they've publicized their phone numbers, so they get cold calls as well.

"On the first day, we got 300 phone calls from people checking we're not a hoax," Talekar says. "Now I'm getting between 20 and 30 calls for food collection, daily. The response is so high, we're overwhelmed and wondering what to do."

Dabbawallas earn about $180 a month, plus a train pass and reimbursement for bicycle maintenance. They're usually the primary breadwinners for their families, making six times more than the poverty line. Most of them start collecting dabbas from homes at 8:30 a.m. and finish in the late afternoon. Some food pickups are scheduled after lunch hour and some for late nights. Talekar commissions dabbawallas, often in pairs, who are within the vicinity of the event to cycle over and pick up the food. At their discretion, they take it to the closest spot where they know homeless people live and distribute it in the huts and shanties.

Talekar says he realizes this model isn't sustainable. All the dabbawalas are contributing time, effort and bicycle mileage on their own dime.

"We're hoping NGOs across the country will want to tie up with us and take this forward," he says. "We have the network and the know-how, but we can only do so much."

They're loathe to say no to people who ask, but some locations aren't accessible by bicycle or cheap public transport. And sometimes residences want to give food away that will only feed a few people.

Still, Talekar is optimistic about scaling up. He and Kedare have launched rotibankindia.com as a repository for anyone who'd like to donate food or know more.

They've also set up collection points at several stations for two hours each morning and evening for household leftovers, to convert smaller contributions into more substantial amounts. They're also looking to share their expertise with groups in the Indian cities of Lucknow, Noida and Hubli.

Even though the dabbawallas don't have much, they have plenty of empathy for those who have far too little.