Accessibility links
Reflections On Indian Identity: What Does It Mean To Call Mindy Kaling's TV Character A 'Coconut'? : Goats and Soda That's brown on the outside, white on the inside. A recent episode of The Mindy Project led our writer to think about her identity as an Indian living in America. 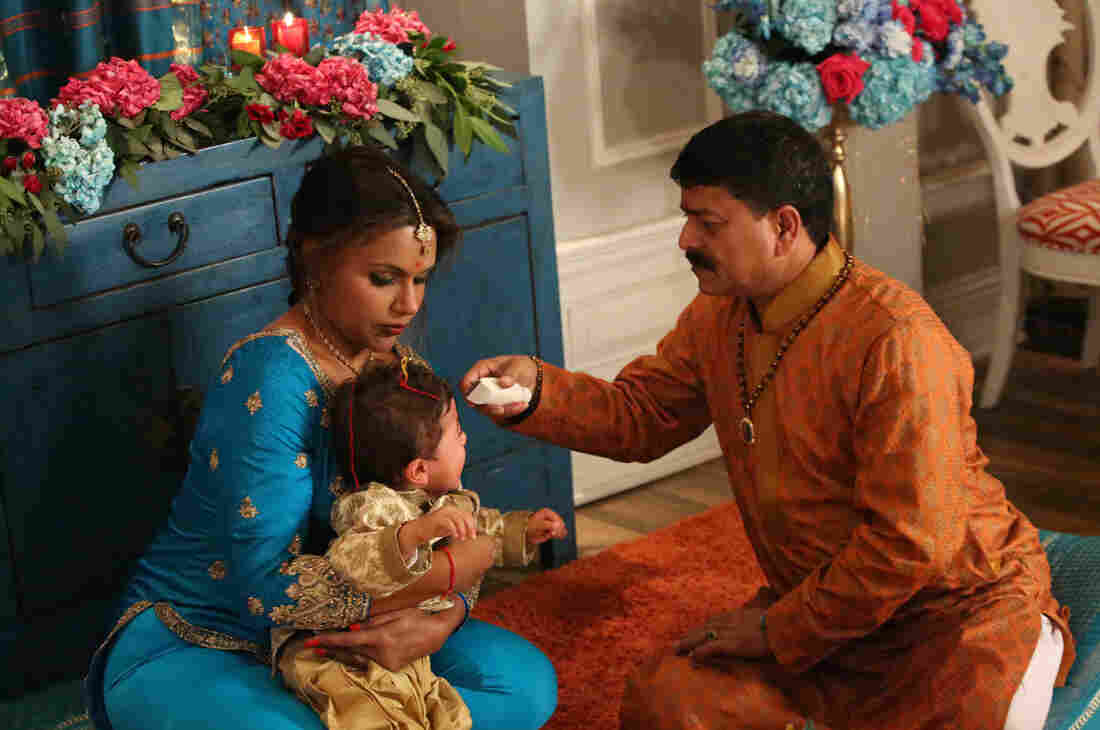 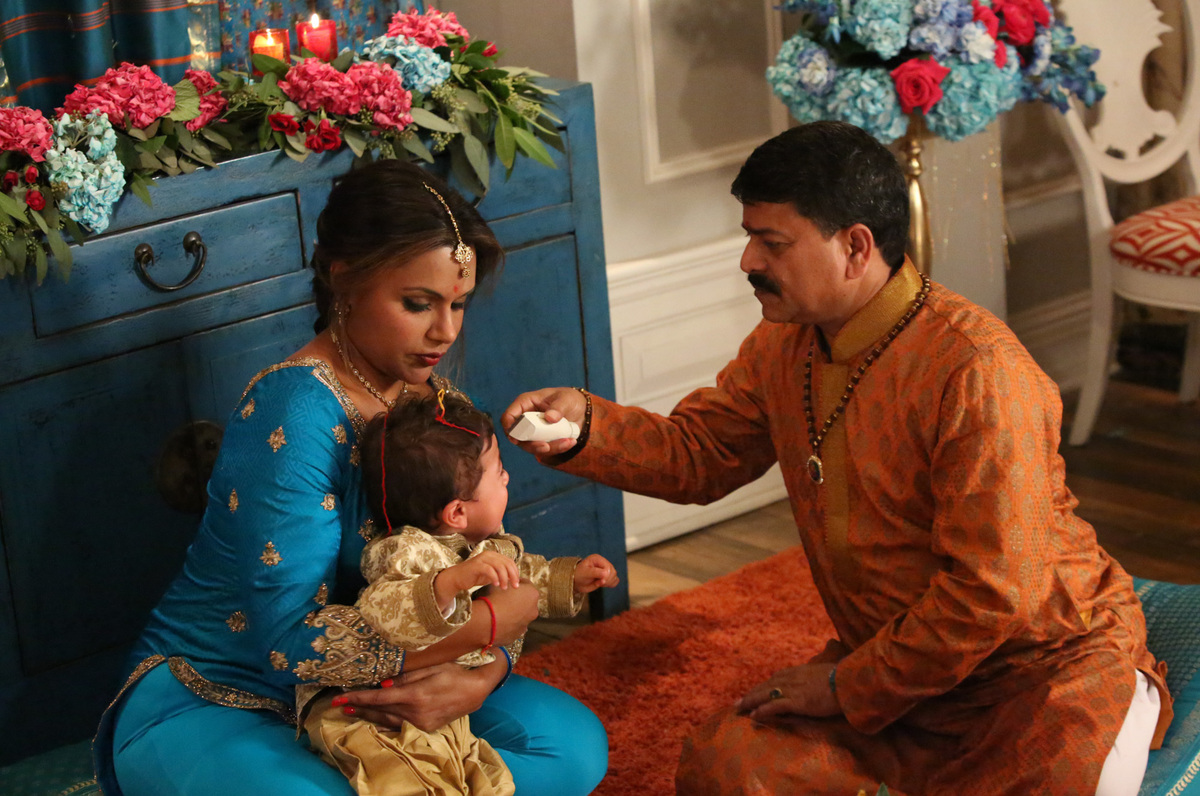 On a new episode of The Mindy Project, Dr. Mindy Lahiri decided to embrace her Indian roots, taking her son for a Hindu head-shaving ceremony.

Last week's episode of The Mindy Project finally addressed a lingering criticism of the show — that it doesn't explore Mindy's "otherness." In it, Dr. Mindy Lahiri — the character played by series creator Mindy Kaling — goes on a date with an Indian man named Neel. He is, as Mindy admits to him, the first Indian guy she's gone out with. She also tells him she knows little about the place her parents came from. "I wanna say there's a river there," she says. "And some tigers?"

Neel, on the other hand, values his Indian identity and is put off by Mindy's lack of awareness. "I don't think I could date a coconut," he says — "brown on the outside, white on the inside."

Neel and Mindy may be fictional, but this dichotomy isn't. They represent the two extremes of South Asian immigrants in the United States: One is determined to assimilate (and loses touch with roots in the process), the other holds on to the culture for dear life even while forging a new identity. And my conversations with friends whose parents moved here from other parts of the world, especially developing countries, have led me to believe that many immigrant communities have their versions of Neel and Mindy.

When I first arrived in the United States in 2002 for graduate school, I was unwittingly a little Mindy-like. Not that I was trying hard to assimilate, but I didn't really think much about my cultural identity. I fancied myself a citizen of the world even though this was my first time traveling abroad. (Yes, I was a bit of a brat.) I didn't yearn to be part of an Indian community. I had a handful of good Indian friends in the States, and that was enough for me.

What I loved about the United States was being able to meet people from all over the world. I cultivated a multicultural circle of friends, including a Croatian, a Vietnamese, an Australian, two Costa Ricans, a Georgian, a Ukrainian and some Germans, Americans and Indians. When we hung out, our discussions easily went to similarities and differences between places we'd grown up in. Questions ranged from "What festivals did you celebrate growing up?" to "Did you wear uniforms to school?" and the all-time favorite, "What do dogs and cows say in your country?" (In my home state of West Bengal, India, the answer is "bhow bhow" and "humbaa!")

After graduate school, I felt as if I didn't fit in. As the only foreigner or one of a few in places where I worked, I began to think more about my identity. I had little in common with most people, in terms of childhood experiences, food, movies, music. That hadn't stopped me from connecting with someone before. Having grown up in urban India with many cultures, languages, music and cuisines, I was used to openly discussing people's backgrounds — that's how I got to know them better.

But here, I felt I was hitting an invisible wall — there seemed to be an awkward silence around cultural differences. Only a handful of well-traveled and curious people asked me about India or my childhood. Most others simply declared their love for yoga, Slum Dog Millionaire and mango lassi!

Some American friends have said they worry about offending people from different backgrounds by pointing out differences.

Meanwhile, another friend (her parents are from India) told me she didn't want her childhood friends to ask her about her culture, because she didn't want to feel different. Kind of like Mindy.

I was beginning to understand why the need to assimilate in America combined with the tiptoeing around differences might create a Dr. Mindy Lahiri. But in that recent episode, even Mindy was pushed to deal with the "coconut" issue. So she decides to have a Mundan ceremony for her new son. It's the shaving of a Hindu baby's head as a symbol of freedom from its past life. "I just don't want my kid to learn how to be an Indian from a Bombay Palace menu on my fridge," she explains to the guests at the ceremony.

That kind of return to heritage is a step many hyphenated Americans take (although, unlike Mindy, they may not turn to Yelp to find the top-ranked Hindu priest in their neighborhood). Over the years, I found myself wanting to understand better where I came from. I made an effort to find like-minded, young Indian people. I celebrated Indian festivals at home and included my friends, both South Asians and American. I felt I was connecting my present to my past, gaining a sense of continuity that I was missing. Lighting lamps and sharing meals with my friends during the festival of Diwali became an annual ritual, opening up conversations around different cultures and bringing me closer to my friends.

I began to see why immigrants hang on so tightly to their traditions in their adopted country. It's a mix of homesickness and wanting to belong in a foreign country. Because identity becomes more important when you can no longer take it for granted.

Now, 14 years since I first moved here, I have arrived at a middle ground when it comes to my cultural identity. Early on, I wouldn't bring up India or my upbringing unless asked. Now I make it a point to do so. My poor friends have to suffer through stories about my childhood or updates on the weather back home — which is often a variation of "Gosh, it's superhot in India!" I make it a point to wear Indian fabrics and saris more often, partly because I enjoy wearing them and partly because it's a way to open up conversations around cultural differences. I'm also trying to get my American husband to learn my mother tongue, Bengali, but that's a work in progress.

Like Mindy, I too am thinking of the next generation. Mindy's Indian parents raised her as an American, assuming that meant keeping their heritage from her. So her mother is surprised when she embraces her roots once again with her son's ceremony. "Mindy, I'm very happy you want to be more Indian," she says. "We weren't sure you'd ever want that."

As for me, I hope someday when my husband and I have children, the definition of "American" will be different. I hope that celebrating Indian festivals with their sari-wearing mom will feel just as normal and American to them as eating hot dogs at a baseball game with their dad.