Accessibility links
An Interview With Thomas Thwaites, Who Spent 3 Days Being A Goat With A Herd On The Alps : Goats and Soda Deep (and not-so-deep) thoughts from Thomas Thwaites, author of GoatMan: How I Took a Holiday from Being Human. 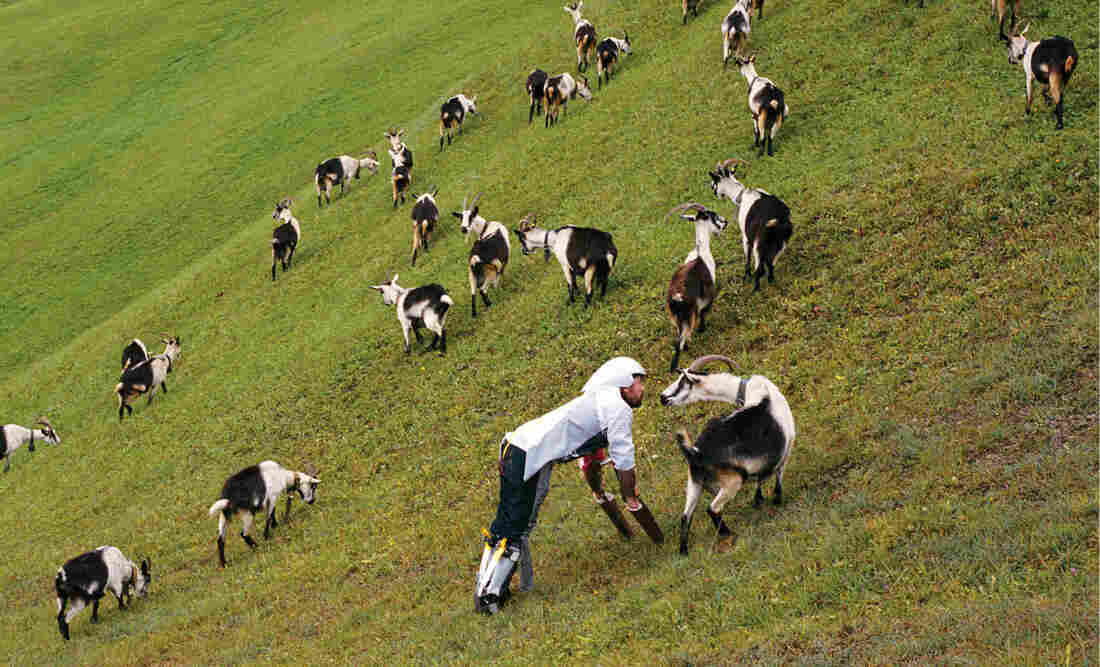 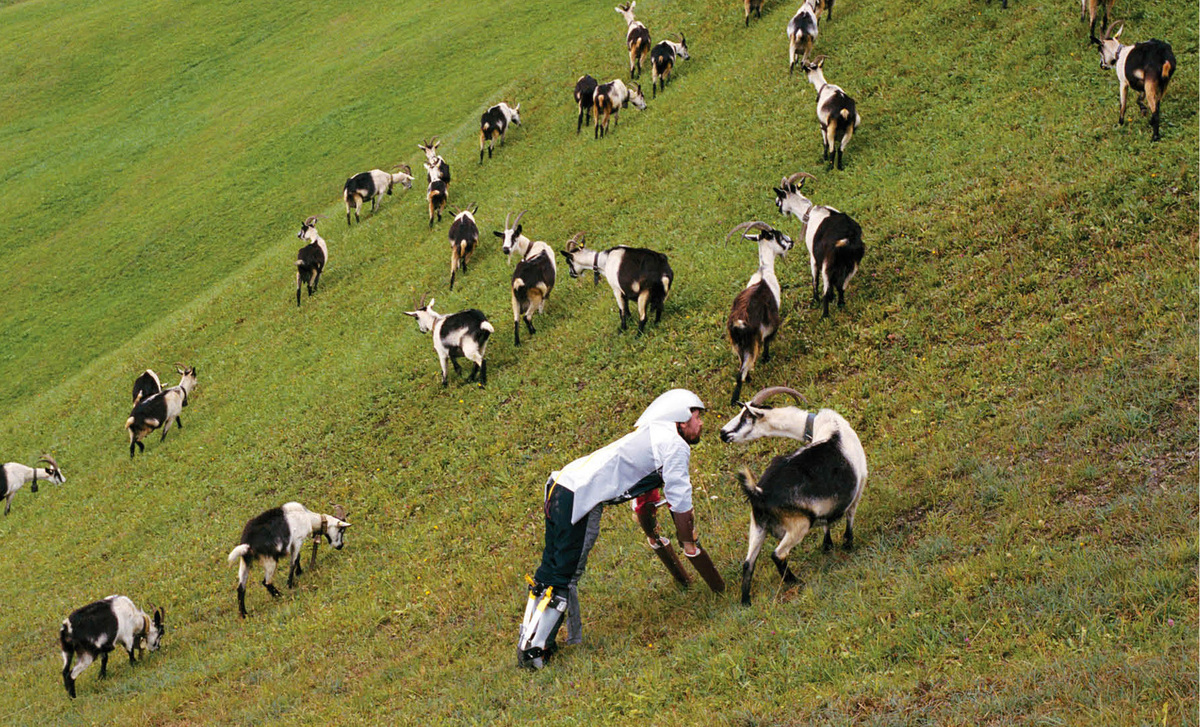 Wearing his prosthetic, goat-like legs (and a crash helmet, just in case), Thomas Thwaites interacts with an alpine goat. 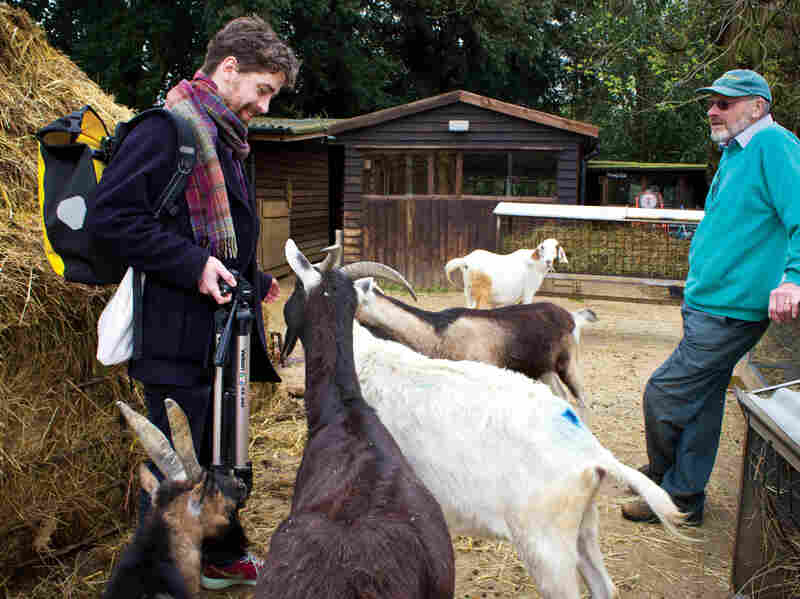 Thwaites did goat research at Buttercups, which he says is "the United Kingdom's (if not the world's) only sanctuary for abused goats." Its 250 goats live down the road from Thwaites's home. Thomas Thwaites/Courtesy of Princeton Architectural Press hide caption 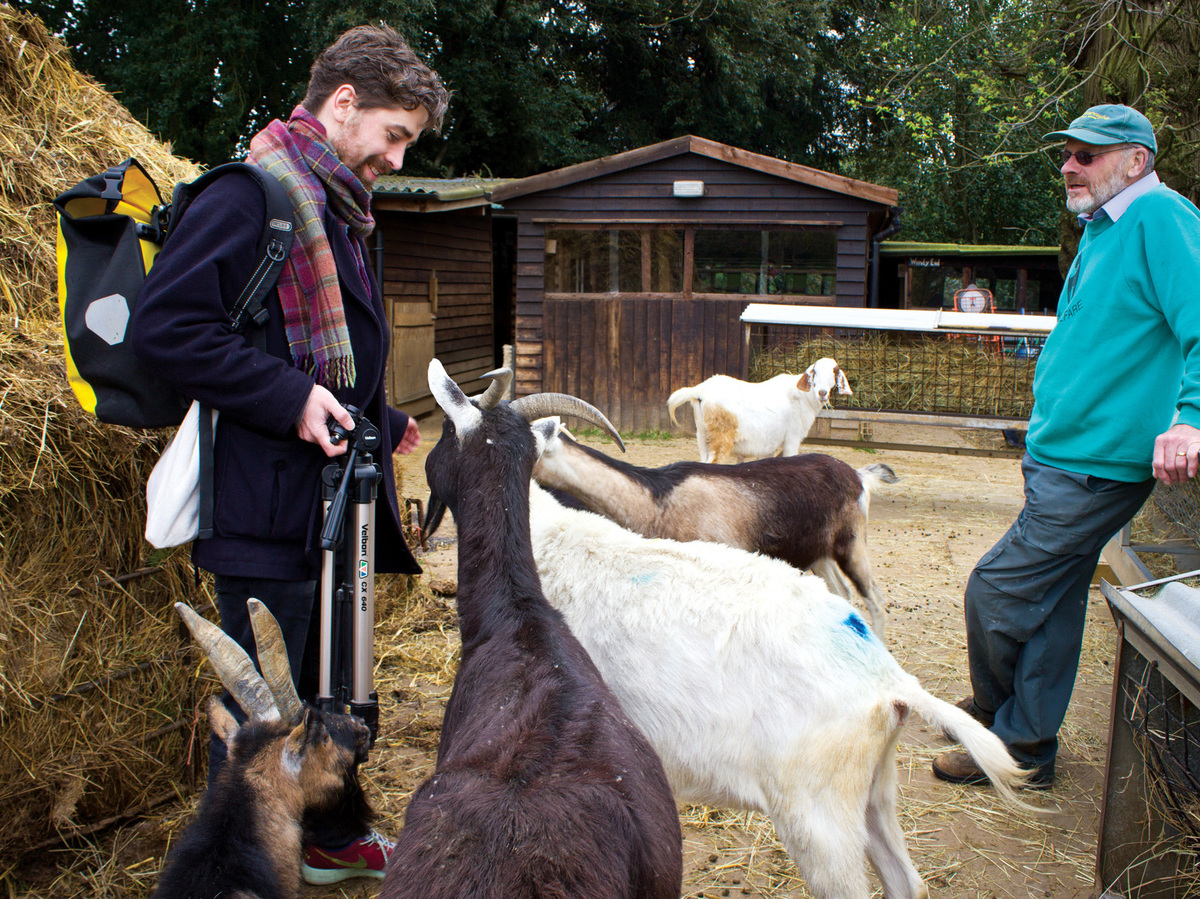 Thwaites did goat research at Buttercups, which he says is "the United Kingdom's (if not the world's) only sanctuary for abused goats." Its 250 goats live down the road from Thwaites's home.

The blog "Goats and Soda" obviously has big love for goats.

And so we were very excited to learn about the new book GoatMan: How I Took a Holiday from Being Human.

Last week, NPR's Scott Simon spoke to author (and designer) Thomas Thwaites, the man who goatified himself because, as he put it, it'd be "an interesting and slightly different way of looking at the world and thinking about ourselves in relation to other people, other objects, other animals."

Of course, as the editor of Goats and Soda (and a Capricorn), we couldn't resist talking to him as well.

You walked on all fours and went up down steep cliffs in the Alps with a herd of goats for three days, eating grass and sleeping outside. Can I ask: Are you crazy?

No. I mean, occasionally I sort of catch myself talking about, 'Oh yeah, I became a goat" and [I think] this must sound really weird. But I've lived with the project for quite a long time, since September 2014. It doesn't seem crazy to me.

Initially you wanted to become an elephant until a shaman convinced you otherwise.

Her point, which I think was slightly valid, was that you don't have anything to do with elephants, you're so far removed in terms of your environment and your cultural history. The only time I see elephants is in a zoo.

So a goat was a more familiar alternative. And you designed a suit that enabled you to walk on all fours in a goatlike way. How much did the suit cost?

It was much more physically demanding than I thought. My fingers and hands were extended to attempt to mimic a goat's foreleg. I'd lose balance because I wasn't used to the length of my front limbs. Moving fast on this really steep, scary Alpine mountain terrain and going downhill was really difficult psychologically and physically. It was much easier for me to go uphill.

Going uphill, I found myself at the highest point in the herd. I looked up and everyone else had just stopped chewing and were all kind of staring at me. It felt a bit like the goats were sizing me up. That was the only time I was scared of the goats. I know they can break each other's legs by getting the leg between their horns and twisting their horns. I was like, 'Wow, I don't really know how to fight like a goat, to butt heads.'

Did a fight happen?

No, no. I'd made a goat ally, this goat I'd just been hanging around with. This goat ally walked straight through the middle of this tense sort of group and it seemed like it diffused the situation. I just followed my goat ally, and then we all walked off together as a herd.

Did you learn anything about goat behavior?

I was trying to forget myself. I wasn't trying to learn about them.

In the moments when you were a "goat," what was it like?

I guess it was kind of meditative.

Do you have new respect for goats?

They're just as evolved as humans. They've evolved to eat grass and travel down mountains extremely dexterously and survive in the wild, and I don't think you quite realize how difficult that is. For all the technological power that we have, we're still not close to being as good as a goat at going down a steep path.

This is a very important question. In the book you say that goats go "Baa." Isn't it "Maaaaa?"

I had a conversation with the editor of the book. I stuck with "Baa" in the book but it really was like, "Wahmarhrrr."

When do they make such utterances?

They tend to make sounds when they're agitated or calling their young.

So they're not big conversationalists?

No, they're much more about smell and body posture. 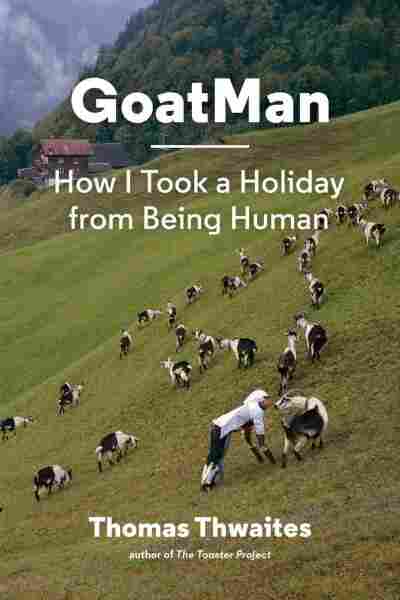 How I Took a Holiday from Being Human

Have you changed after your days as a goat? Do you, for example, worry less about stuff?

It'd be nice to be able to say, 'Now, whenever I get worried or down, I just think, Thomas, be more the goat.' But that's one of the difficult things about feelings and being worried and depressed or whatever. It's difficult to rationally think your way out of it.

Any plans to return to being a goat?

I've remade the back legs to be a bit more comfortable and help me balance my weight a little more. I'm kind of kneeling into [the new prosthetic rear legs]. It's a bit more natural for a human.

I may go back to being a goat. I think I barely scratched the surface.