Accessibility links
Dr. Margaret Chan, Head Of WHO, Offers Stern Warning About World's Readiness To Fight Pandemics : Goats and Soda Dr. Margaret Chan, head of the World Health Organization, offered congratulations for victories on the health front — and words of serious concern about the future. 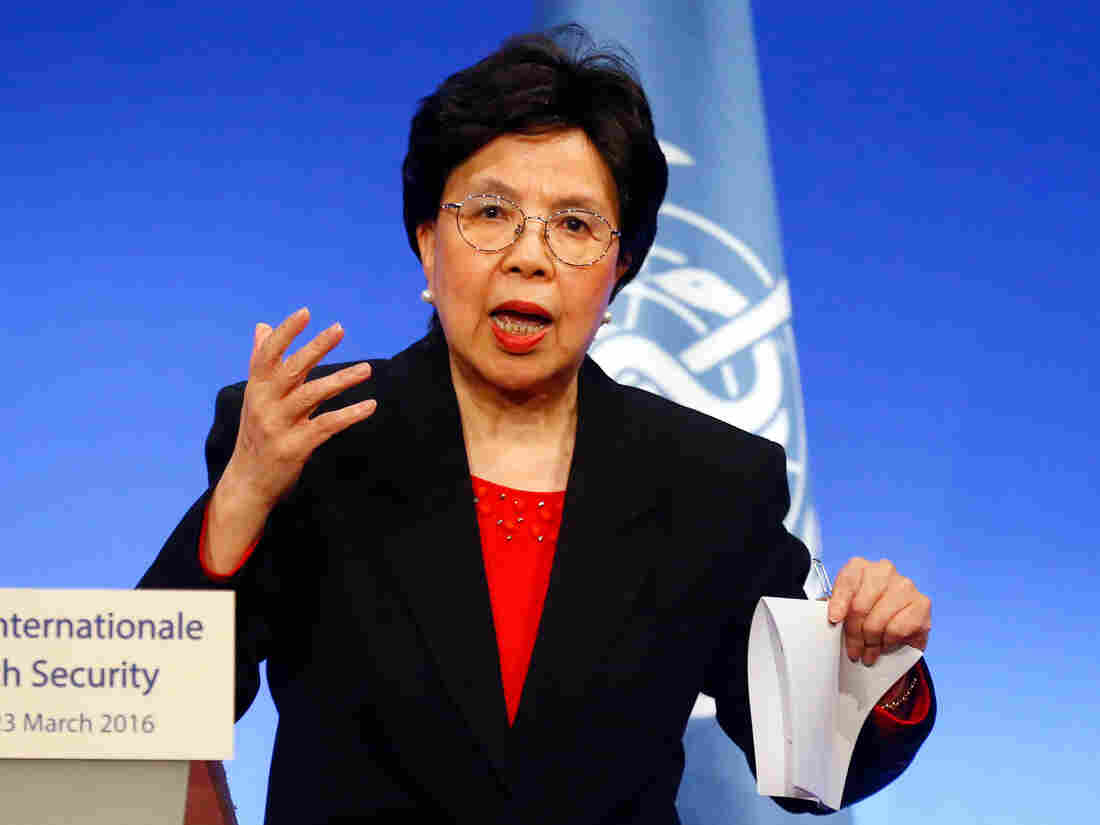 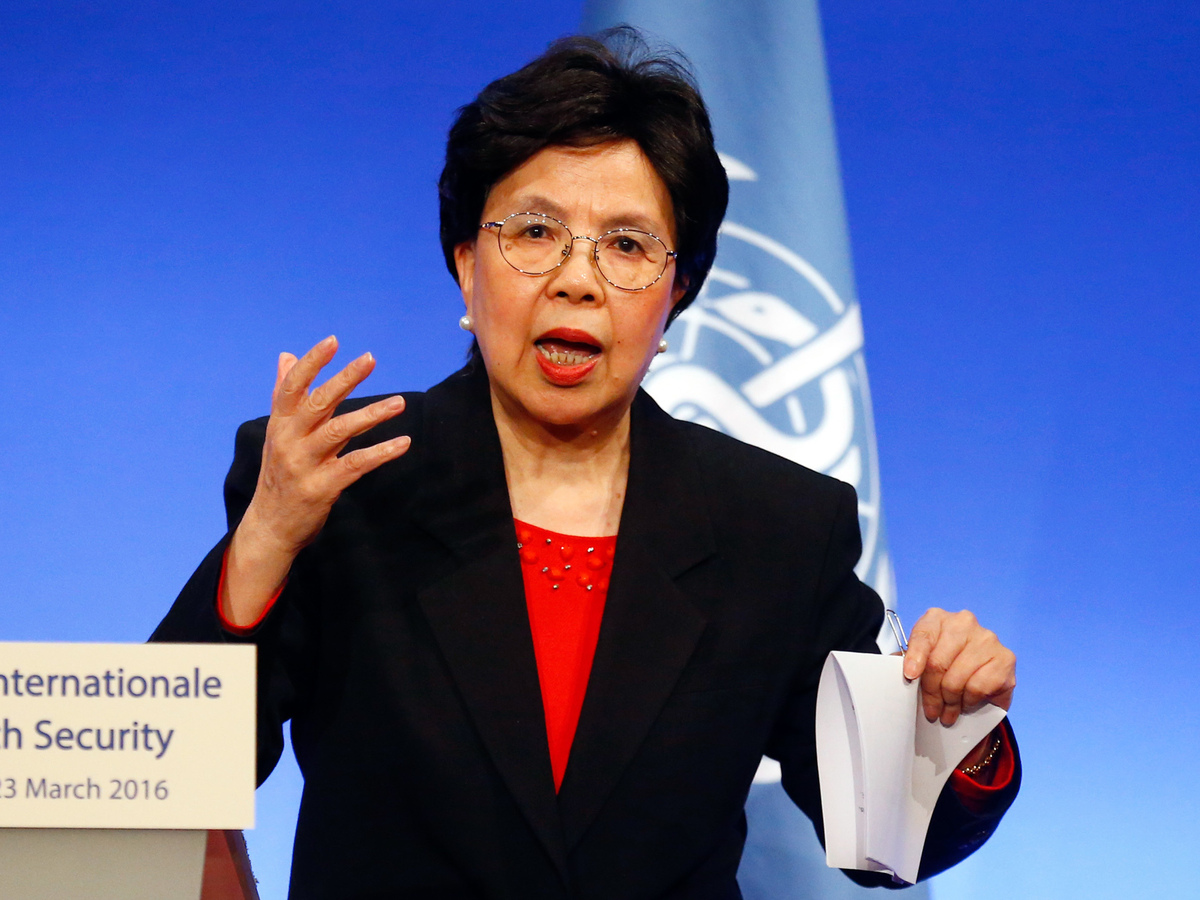 World Health Organization head Dr. Margaret Chan delivering a speech in March of this year at a summit in Lyon, France.

The head of the World Health Organization, Margaret Chan, came out swinging at the opening ceremony of the 69th World Health Assembly in Geneva on Monday. The meeting of health officials from nearly 200 countries is usually a low-key, bureaucratic affair. Chan, however, opened the assembly by basically saying that the world is facing unprecedented global health challenges right now and is ill-equipped to deal with future threats.

"For infectious diseases, you cannot trust the past when planning for the future," she warned.

Chan said emerging diseases, climate change, new global transportation networks and the failure of "more and more" antibiotics make the planet ripe for the next pandemic.

"Changes in the way humanity inhabits the planet have given the volatile microbial world multiple new opportunities to exploit," she said. "There will always be surprises."

And she said the world must take action to prepare for outbreaks of diseases that haven't even been discovered yet.

She also spoke of a new program for WHO representing "a fundamental change" by adding to its agenda the capacity "needed to respond to outbreaks and humanitarian emergencies."

Here are excerpts from her address.

Public health constantly struggles to hold infectious diseases at bay, to change lifestyle behaviors, and to find enough money to do these and many other things.

But sometimes we need to step back and celebrate.

Commitment to the Millennium Development Goals brought focus, energy, creative innovation and, above all, money to bear on some of the biggest health challenges that marred the start of this century.

We can celebrate the 19,000 fewer children dying every day, the 44 percent drop in maternal mortality and the 85 percent of tuberculosis cases that are successfully cured.

Africa in particular can celebrate the 60 percent decline in malaria mortality, especially since ALMA — the African Leaders Malaria Alliance — supported by partners did so much to make this happen.

We can celebrate the fastest scale-up of a lifesaving treatment in history. Let me remind you more than 15 million people living with HIV are now receiving antiretroviral therapy, up from just 690,000 in 2000. That's quite an achievement.

A culture of measurement and accountability evolved to make aid more effective. Greater transparency brought the voice of civil society to bear in holding governments and donors accountable for their promises.

The health profile changed; it's moved from looking at health from a drain on resources to an investment that builds stable, prosperous and equitable societies.

Everyone in this room can be proud of these achievements.

[But] in an interconnected world characterized by profound mobility of people and goods, very few threats to health are local anymore.

Air pollution is a trans-boundary hazard that affects the global atmosphere and contributes to climate change.

Drug-resistant pathogens, including the growing number of "superbugs," travel internationally in people, animals and food.

The marketing of unhealthy foods and beverages, especially to children, is now a global phenomenon.

Safeguarding the quality of pharmaceutical products has become much harder, with complex manufacturing procedures and supply chains [spanning] across multiple countries and multiple companies.

Ensuring the quality of the food supply is also much harder when a single meal can contain ingredients from all around the world, including some potentially contaminated with exotic pathogens.

The refugee crisis in Europe taught the world that armed conflicts in faraway places will not stay remote.

The Ebola outbreak in three small countries paralyzed the world with fear and travel constraints.

Last year, a business traveler infected with MERS coronavirus returned home to the Republic of Korea, disrupting the country's economy as well as its health system.

The rapidly evolving outbreak of Zika virus warns us that an old disease that slumbered for six decades in Africa and Asia can suddenly wake up on a new continent to cause a global health emergency.

This year's long-feared appearance of urban yellow fever in Africa, now confirmed in the capital cities of Angola and the Democratic Republic of Congo, is yet another serious event with potential for further international spread.

For infectious diseases, you cannot trust the past when planning for the future.

Changes in the way humanity inhabits the planet have given the volatile microbial world multiple new opportunities to exploit. There will always be surprises.

The possibility that a mosquito bite during pregnancy could be linked to severe brain abnormalities in newborns alarmed the public and astonished scientists.

Confirmation of a causal link between infection and microcephaly has transformed the profile of Zika from a mild disease to a devastating diagnosis for pregnant women and a significant threat to global health.

Outbreaks that become emergencies always reveal specific weaknesses in affected countries and illuminate the fault lines in our collective preparedness.

For Ebola, it was the absence of even the most basic infrastructures and capacities for surveillance, diagnosis, infection control and clinical care, unaided by any vaccines or specific treatments.

For Zika, we are again taken by surprise, with no vaccines and no reliable and widely available diagnostic tests. To protect women of childbearing age, what can we do? We can only offer advice. Avoid mosquito bites. Delay pregnancy. Do not travel to areas with ongoing transmission.

Zika reveals an extreme consequence of the failure to provide universal access to sexual health and family planning services. Latin America and the Caribbean have the highest proportion of unintended pregnancies anywhere in the world.

Above all, the spread of Zika, the resurgence of dengue and the emerging threat from chikungunya are the price being paid for a massive policy failure that dropped the ball on mosquito control in the 1970s.

The lesson from yellow fever is especially brutal.

For more than a decade, WHO has been warning the world that changes in demography and land use patterns in Africa have created ideal conditions for explosive outbreaks of urban yellow fever. Africa's urbanization has been rapid and rampant, showing the fastest growth rates anywhere in the world.

Migrants from rural areas, and workers from mining and construction sites, can now carry the virus into urban areas with powder-keg conditions: dense populations of nonimmune people, heavy infestations with mosquitoes exquisitely adapted to urban life, and the flimsy infrastructures that make mosquito control nearly impossible.

The world has had a safe, low-cost and effective vaccine that confers lifelong protection against yellow fever since 1937. Yellow fever vaccines should be used more widely to protect people living in endemic countries because yellow fever is not a mild disease.

Let me give you a stern warning. What we are seeing now looks more and more like a dramatic resurgence of the threat from emerging and re-emerging infectious diseases. The world is not prepared to cope.

I welcome the current joint external evaluations that are looking at preparedness and response capacities in several countries. The evaluations need to continue with the utmost urgency, as a tool under WHO authority and coordination.

WHO is the organization with universal legitimacy to implement the International Health Regulations. The evaluations must be accompanied by well-resourced efforts to fill the gaps.

Given what we face right now, and the next surprises that are sure to come, the item on your agenda with the most sweeping consequences, for a danger that can quickly sweep around the world, is the one on the reform of WHO's work in health emergency management.

The ambition of the agenda [the world needs to adapt] is to tackle the root causes of the world's many woes, from the degrading misery to poverty to the consequences of terrorism and violence, in an integrated and interactive way.

The agenda puts the people left behind first.

It also falls to the health sector to show some principled ethical backbone in a world that I'm afraid [has] for all practical appearances lost its moral compass. We must express outrage at the recent bombings of hospitals and refugee camps in Syria and Yemen, the use of rape and starvation as weapons of war, and the killing of innocent civilians in the pursuit of terrorist goals.

We have entered an ambitious new era for health development. We have a solid foundation of success to build on.

WHO, together with its multiple partners, is poised to save many more millions of lives. I ask you to remember this purpose as we go through an agenda that can mean so much for the future.